Canada. Werewolves. It's the smartest and funniest scary movie in a long time -- and a true feminist horror film. 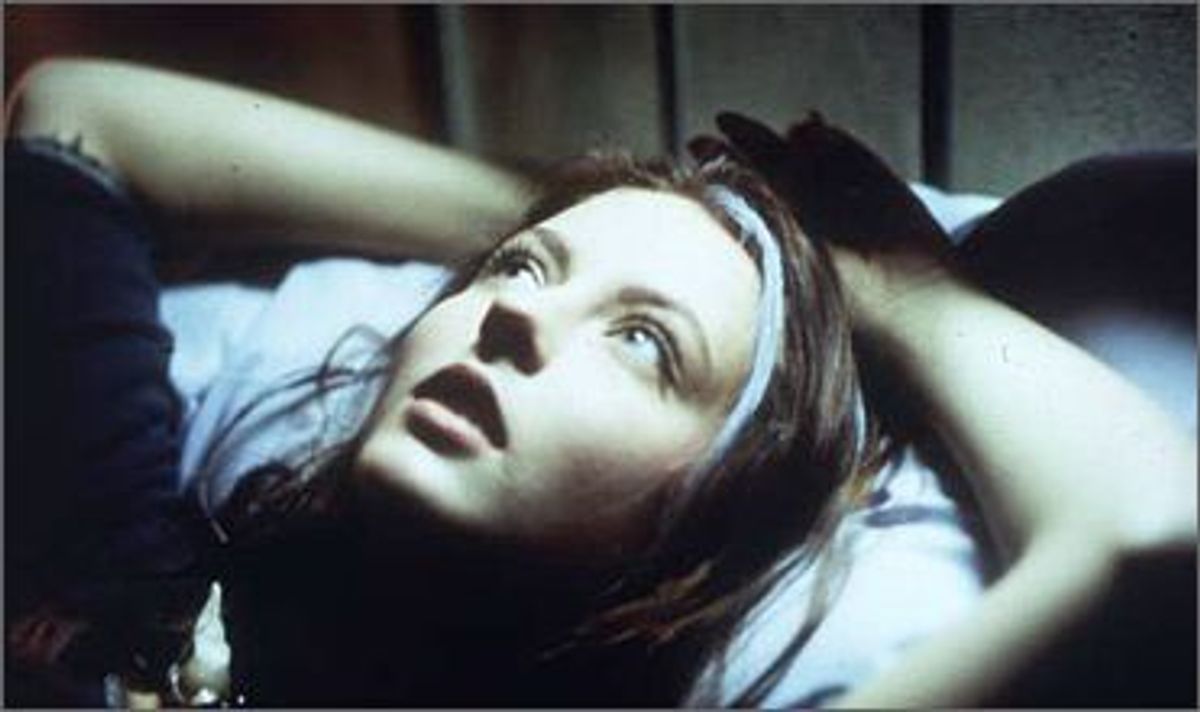 "Let's forget the Hollywood rules," says a character in the Canadian werewolf movie "Ginger Snaps," and the picture takes his advice. "Ginger Snaps," which was directed by John Fawcett from a clever, canny script by Karen Walton, is one of the smartest and funniest horror movies since the '80s high points of "Near Dark," "Parents" and "The Stepfather." It's not quite in a class with those should-have-been classics, but it's damn close. It's got a real emotional punch.

In a perfect world, "Ginger Snaps" would be just the sort of thing that teenagers looking for a fright fix could see at their local multiplex. Bluntly funny about the teenage black humor and death wishes that grow out of boredom, it's also just the sort of movie that gives authority figures the heebie-jeebies.

"Ginger Snaps" had the bad fortune to be in pre-production at the time of the Columbine shooting (and another school shooting in Alberta, Canada). When word got out that Canada's federal film-funding agency, Telefilm Canada, had backed the project, the Toronto Star exploited the public fear and shock over the shootings and announced that the Canadian government was funding what it derisively described as a teen slasher movie. A predictable barrage of debate followed, finally silenced by the film's release to critical acclaim, and its winning one of Canada's Genie Awards. "Ginger Snaps" was also a critical hit in the U.K., though it's only just reaching America, and in a limited theatrical release. The good news, though, is that the movie is also just coming out on DVD, so if it's not playing in your area, you'll still be able to see it.

The teenagers in "Ginger Snaps" aren't the perky and buff victims-in-waiting of most teen horror movies. Sixteen-year-old Ginger (Katharine Isabelle), with her red hair and almond-eyed, screw-you stare, and her 15-year-old sister Brigitte (Emily Perkins), sloughing around in baggy mohair sweaters and peeking out from her long black bangs like the love child of Patti Smith and Dwight Frye, are a pair of goth outcasts, despised by nearly all the other kids in their suburban Ontario high school. Cocooned in the bedroom they share (a cross between an industrial garage and a family crypt), Ginger and Brigitte wallow in their general disdain for everything around them: the classmates who torment them and whose deaths they cheerfully imagine; their chipper, flower-arranging mom (Mimi Rogers); their dull, sterile town.

Just about the only thing that rouses them is death: Their pact to kill themselves, together, while they're still young, and their school art project, a series of photos taken by Brigitte of Ginger in various and gruesomely staged deaths. (Those pictures are one of the multiple puns of the title.)

In other words, these two are the kind of kids whose "unhealthy" obsession causes parents and teachers to fret, and the kind who are immediately recognizable to anyone who didn't spend their high-school years as part of the in crowd. Ginger and Brigitte have formed such a close bond that they've effectively shut out everything else. They haven't even started menstruating yet, as if they'd found a way to transport themselves to their own gloomy Neverland.

The movie's central metaphor -- and its sick joke -- comes when Ginger does finally get her period, and is immediately attacked by a werewolf. She survives, but examining herself back at home she notices the scars have already started to heal. And there's more: Little silvery hairs sprout from those scars. The link between lycanthropy and menstruation was first made in a "Buffy" episode a few years back when Willow is explaining to her werewolf boyfriend Oz that he's not the only one affected by the cycles of the moon.

"I get a little cranky every 28 days," she tells him. In "Ginger Snaps," lycanthropy works as the same metaphor for adolescence that telekinesis did in "Carrie" and "The Fury," though the correlations are even more direct: hair growing in strange places, uncontrollable urges, the simultaneous desire to be accepted and to revel in being an outsider. One of the movie's best jokes comes when Ginger is in the bathroom shaving the werewolf hair off her legs and she notices a claw growing out of her ankle. When her mother walks in without knocking Ginger pulls the shower curtains shut. Says her mom: "You don't have anything I haven't seen before."

Ginger's transformation into a werewolf also works as a metaphor for the growing pains that drive teenage friends apart. Ginger and Brigitte have nothing but contempt for the boys who lust after Brigitte's ripe, Amazonian build. But to Brigitte's dismay, the bite of the wolf puts her sister's hormones into overdrive and soon she's vamping down the school hallways in short skirts and clingy tops, flirting with every boy who looks her way.

When Ginger rolls in from a date, Brigitte finds her with her mouth covered in blood. Ginger explains, "I've got this ache, and I thought it was for sex, but it's to tear everything to fucking pieces." That's probably as good a summation of the predatory nature of teenage sexuality as any. Movies aren't good because they're morally responsible (the most well-intentioned movies are often the dullest), but "Ginger Snaps" knows exactly what to make of its violence. When Ginger is screaming for her life as she's attacked by that werewolf and Brigitte is frantically trying to save her, you can sense that their suicide fantasies are so much bored bluster. Starting with nihilistic teenage fantasies, "Ginger Snaps" moves Ginger and Brigitte to a place where they have to confront the shock of real violence and real death.

The heart and guts of the movie is the relationship between the two sisters, and Brigitte's determination, with the help of the local pretty-boy pusher (Kris Lemche, appealingly laid back) to find a cure for Ginger. That puts much of the movie's emotional burden squarely on Emily Perkins' fragile shoulders. The beauty of her performance is in the way Brigitte moves from hero worship to independence as she tries to hang onto her sisterly bond. She moves the character from frightened goth mouse to something like the little werewolf hunter who could. And she's got the movie's most quietly unnerving moment: trying to share her sister's new hunger by lapping up the blood of a slain friend. Perkins plays the scene as someone right on the cusp between normalcy and darkness; it's the movie's tense high point, a few unpredictable seconds when all bets are off.

The whole movie is a duet between Perkins and Katharine Isabelle's Ginger. Paul Jones' makeup gives Ginger's transformation a great look: sharp, sturdy fingernails, incisors that peek teasingly out of the corners of her smile, and punky silver streaks running through her red hair. Isabelle gives a performance that's reckless even as she never loses her control as an actor. Instead of treating Ginger's blood lust as the equivalent of a Halloween costume, she plays it as a deep, unquenchable longing. When she's holding onto her bed frame howling as Brigitte pierces her navel, she seems less monstrous than fulfilled, and that's the key to the movie's horror and its shivery, hormonal thrills. "Ginger Snaps" never loses sight of the tormented sisterly relationship at its center, and wraps it up in the gorgeous and morbid pietà of the final shot.

Karen Walton's script has obviously been written with an eye toward avoiding the way teenage girls are usually portrayed in horror films as nubile scream queens. She's written a genuinely feminist horror movie. Walton writes a distinctive brand of mordant, deadpan humor, and Fawcett has directed the actors to play it so straight that you may find it takes a while to tune in to the picture's black humor.

It's no small accomplishment to begin with a premise like this one and make a horror movie that's utterly free of camp. In the best tradition of fantasy filmmaking, "Ginger Snaps" takes its premise seriously (which does not mean humorlessly) and mines the central metaphor to make it seem inevitable rather than obvious. Fawcett works with real tact. The movie is bloody to be sure, but he manages to suggest the attacks rather than showing them, often just giving us glimpses of the aftermath. He and the cinematographer Thom Best have given the picture a look that's dark but not gloomy. There's a night-blooming steeliness to "Ginger Snaps" and, in the daylight scenes, a sense of impermanence, of a world momentarily reprieved from the dark desires of nighttime.

The resolution goes on a bit longer than it should, draining some tension out of the movie. But overall that's a niggling flaw. "Ginger Snaps" is a small knockout. While I'm sorry it's taken so long to be released here, the timing is, in one way, fortunate. Opening the week before Halloween, the movie is the sort of treat that a set of particularly brainy people have dreamed up for our goodie bags.