Search for bombs, not nail clippers

A commercial pilot says that security checks are laughably misdirected 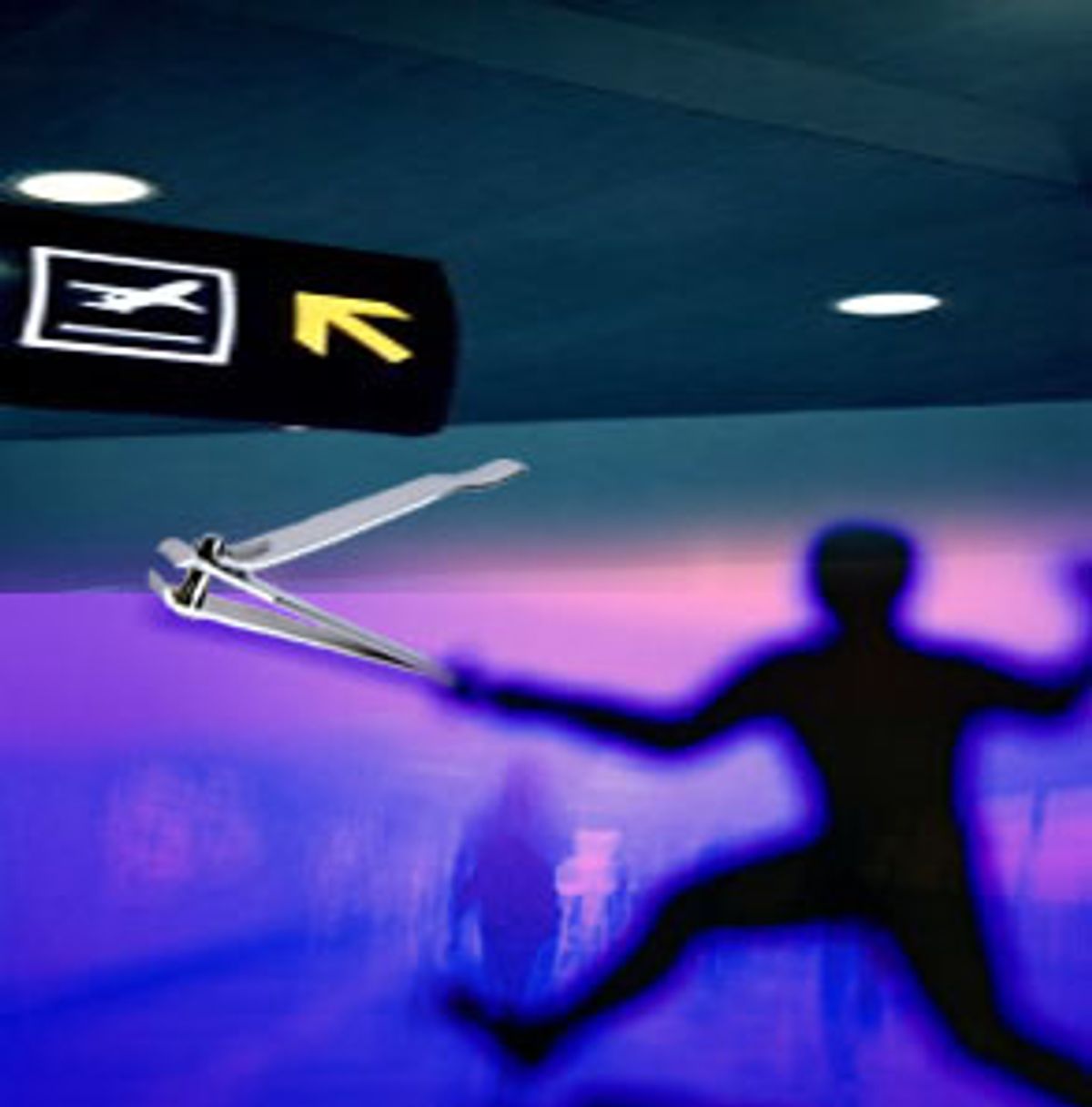 At a major international airport recently, an airline pilot in full uniform, en route to fly a planeload of passengers to a major city in the Northeast, had a small pair of scissors confiscated from his toiletries bag. When the pilot asked a U.S. marshal what purpose was served by taking a pair of rounded-end Fiskars from the very person responsible for flying an airliner, the marshal shrugged and answered, "That's what they want us to do."

Whether this pilot intended to hijack himself with scissors is, if it can even be suggested with a straight face, a long-shot suspicion at best, but reason and clear thinking aren't a high priority on the concourses these days. At LaGuardia airport more than a week after the Sept. 11 attacks, not a single pay phone was in working order. "For security," nodded a policeman. If there's a relationship between pay phones and security, the Gotham cop had no particular insight. "It's a new world," was his only explanation. In another episode, a U.S. Customs officer reportedly was relieved of his box cutter, a tool he uses to inspect bales and packages, but was allowed to pass with his 9 mm pistol strapped in its holster.

Since Sept. 11, thanks in part to the Federal Aviation Administration's new zero-tolerance policy toward the carriage of sharp objects, airport security in the United States has spiraled into a scene of near-absurdity. Passengers are subjected to two-hour check-in times while senior citizens have their carry-on luggage combed for nail files. Silverware is banned from restaurants, and there's talk of removing mirrors from airplane lavatories, lest one is smashed and the plane commandeered by a terrorist wielding a pointed shard.

In addition to the madness at the X-ray machines, airlines also have instituted gate-side luggage checks, in which randomly chosen passengers are paged just prior to boarding, and must lay out their carry-ons for inspection by staff wearing rubber gloves. Random to the point of senseless: a roll call of selectees during one recent departure included a mother with two small children, a middle-aged businesswoman and an off-duty airline employee deadheading to work. If these individuals were the result of some behind-the-scenes profiling, dare we suggest some parameters need to be reset?

Meanwhile, to suddenly deem all sharp objects potential instruments of terror is not only incredibly time consuming, but sets the ultimately impossible goal of keeping any and every "weapon" out of the cabin of an airliner. All the determination in the world, replete with the most juvenile and ridiculous regulation, will not out-duel the ingenuity of even a half-determined sneak.

From pencils to flammable liquids hidden in shampoo bottles, there is, when it comes right down to it, virtually no way to prevent somebody from fashioning a dangerous device if he or she truly desires to. We should know this, yet time and time again we've heard the unwavering support of inconvenienced passengers as they languish in check-in lines or have their bags eviscerated by underpaid security guards. "I don't care how long it takes," goes the mantra of the delayed flier. "If it makes flying safer, I'm all for it."

But what if it doesn't? Should we really care if a passenger in Row 15 has a Swiss Army knife in his backpack? We should realize that a follow-up terrorist attack involving the airlines would not, in all likelihood, be another kamikaze-style hijacking. And in the wake of last month's destruction, it's almost inconceivable that a plane full of passengers and crew, unless they too happen to be suicidal fanatics, could ever again be overtaken by boxcutters and knives. No, our resolve belongs elsewhere, and our resources would be much better spent combating another, far more likely threat. Which brings us to a frightening truth. As we obsess over forks, corkscrews and hobby knives, and slowly turn our airports into scrap metal depositories, the greatest danger of all has rarely been discussed: explosives and bombs.

Most of us remember Pan Am 103, a New York-bound Boeing 747 named "Clipper Maid of the Seas," blown up by Libyan terrorists over Lockerbie, Scotland, three days before Christmas in 1988. A small amount of Czech-made explosives, hidden inside a Toshiba radio, brought down the 300-ton aircraft and took the lives of 269 people, most of them Americans. Following this disaster, several measures were put in place to enhance safety aboard international flights.

The most familiar of these, at least to seasoned travelers, is positive luggage/passenger matching, whereby a person's bag may not make the journey without the passenger who owns it. This may not be the most comprehensive insurance against someone on a suicide mission, but it's worth noting that the Lockerbie terrorists did not die over Scotland in the flaming plunge of Pan Am 103. They were safely on the ground in Valetta, Malta, the island from which they'd sent along the explosive-laden luggage aboard a connecting flight. The deadly suitcase, sans its owners, made its way to Frankfurt, and then to London, where it was "interlined," to use industry parlance, onto Flight 103.

Another post-Lockerbie innovation, used at certain European airports, involves the placement of checked luggage in pressurized chambers that simulate the climb and descent of flight, detonating any barometrically triggered bombs before they're loaded into the holds of aircraft.

Most important, however, and with farthest-reaching potential, has been the development of highly sophisticated explosive-screening machines. Yet for reasons both political and economic, relatively few of these devices are in use at U.S. airports. The precise number, in fact, along with their exact whereabouts, is a guarded secret. But considering the hysteria and discipline at the metal detectors these days, it is downright tough to stomach a recent estimate that only about 5 percent of all checked luggage in the United States was undergoing any kind of high-tech explosives screening. This, during a virtual lockdown of the nation's airports.

Since the destruction of the World Trade Center, the focus of security has been inordinately "above deck," scrutinizing our pockets and carry-ons. We are forbidden to walk aboard with scissors, but the bags down below may or may not have been examined for explosives. (And, for good measure, the passenger/luggage match rules described above are still not applicable to domestic flights.)

The airlines, once reluctant to pursue such technology on a large scale for fears of delays and cost, know a bombing -- or multiple bombings -- could be a deadly slash to the jugular of the nation's already precarious economy, bringing ruin to their industry by paralyzing an already nervous populace. Behind the scenes they now are working to institute new, more extensive procedures, the details of which are wisely (or for lack of scope) kept confidential.

But the airlines, government and FAA cannot act fast enough, and need to have effective anti-explosive technology and procedures in place at every U.S. airport, as well as all foreign airports from which flights depart for U.S. destinations, as quickly as possible. Prior to recent events, FAA's goal for establishing a comprehensive detection network was the year 2017. That is, if you need help with the math, more than 15 years from now.

Advanced screening equipment costs as much as $1 million per unit, and several hundred, even thousands, of these would be needed to adequately equip more than 400 commercial airports across the country and beyond. Remember that the security of our airports is only as strong as the system's weakest, most vulnerable point. Passengers connecting in New York, Chicago or Boston may have boarded commuter flights at Appleton, Wis., Scranton, Pa., or Presque Isle, Maine. (Just as Mohammad Atta and the hijackers of American flight 11 cleared security not at Boston's Logan, but in Portland, Maine.) But we haggle over the cost at our own peril.

We cannot afford another postmortem frenzy over deficient security measures, not to mention the shame and embarrassment over how, possibly, we could have missed this one. Regardless of how it's paid for, we must soon be assured of an extensive and effective system. The billions of dollars required are a mere fraction of what we stand to lose.