"Riding in Cars With Boys," the uplifting memoir of a teenage mom done good, is twisted into a smarmy fable designed to promote abstinence-only sex education. 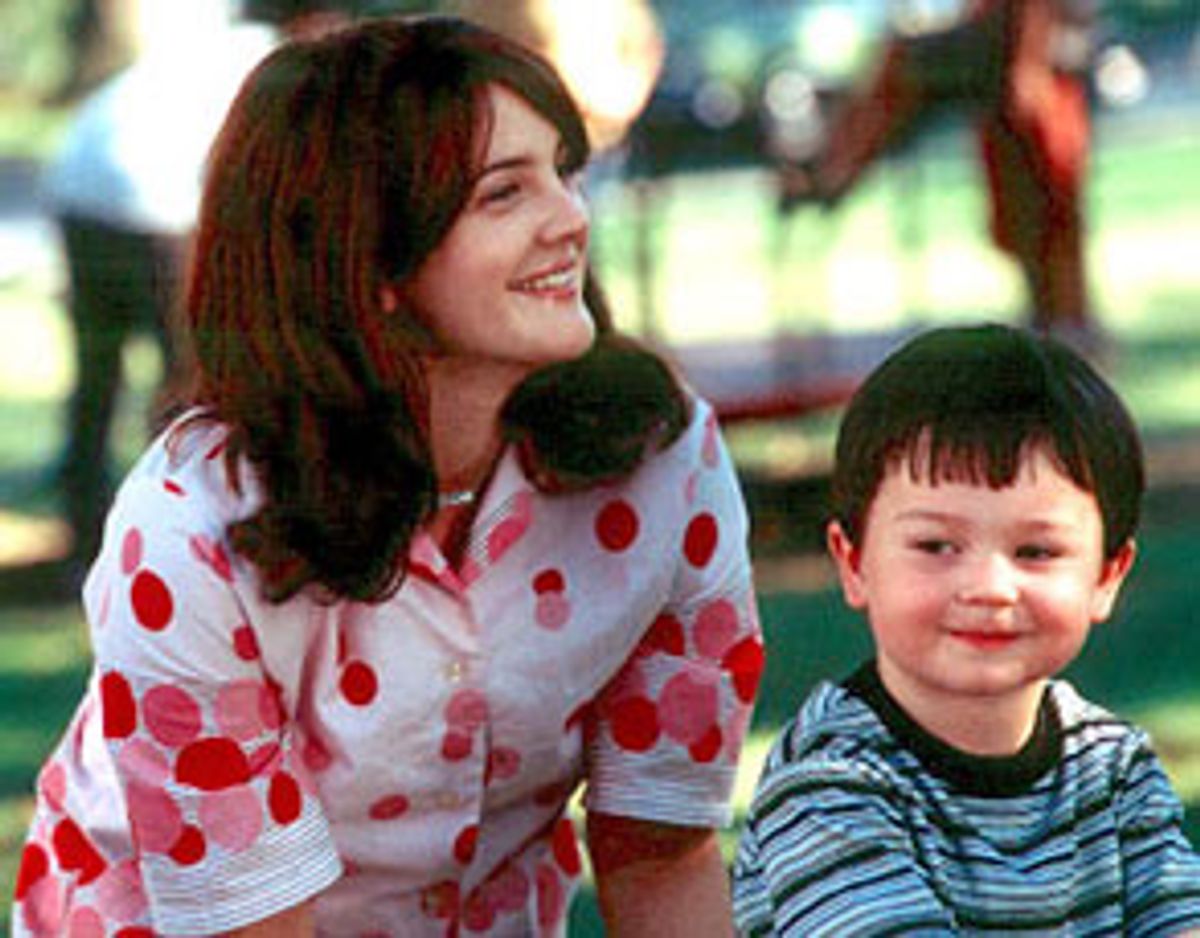 The first time I picked up a copy of "Riding in Cars With Boys," I distinctly remember dropping the book on the floor and screaming, "Shit!"

At the time, I was in the Wesleyan University campus bookstore, browsing a section reserved for books by Wesleyan authors, trying to convince myself that, one day, my hopelessly expensive education would land me a book contract. It was the fall of 1991, and I was an 18-year-old frosh. My daughter, then 2, had finished her morning croissant and was tagging along behind me, trying to drag me back to the cafe for a second round.

The reason "Riding in Cars With Boys" made me swear was that, rather than convince me that I would write one day, the book was evidence that at least one story I could write was already written. Like me, the author, Beverly Donofrio, was a smart teenage girl who got pregnant in high school, and then, according to the jacket blurb, went on to attend "an elite New England university" with her kid.

The university was Wesleyan, of course. Which meant that I had a doppelgänger. Or rather, since she had been there first, some 15 years earlier, I was someone else's doppelgänger.

I tried to rationalize my way out of Donofrio's shadow, relying on an 18-year-old's defensive conviction that the life I was living had never been lived before: I was pregnant at 15; she got pregnant at 17! I went to college at 18, the same age as the rest of my classmates; she went at 26, after attending a community college, making her what Wesleyan called an ACE (Adult Continuing Education) student!

Whatever. I got over my delusions of uniqueness. I was, after all, a smart teenage girl. There was nothing inherently special about being a teen mother or a single mother at an elite university: I was ordinary. And lucky. So was Beverly Donofrio -- at least that is what I learned from her memoir, which I devoured once my bitterness evaporated and curiosity took its place.

Later on, a professor who knew us both tried to set me up with Beverly. I had wanted to see her, and I had her phone number for a while, but I never called. I'm not sure why. Maybe it was enough for me that she was out there, blazing a trail.

Then I got another chance to meet her -- by watching Penny Marshall's film of Donofrio's memoir. Only I didn't really meet her, because as anyone who has seen the movie knows -- and I emphatically do not encourage anyone to see it for recreational purposes, and absolutely not if you think you're going to see how "real" single mothers live -- the movie "Bev" is not my Bev, not our Bev, not Wesleyan Bev.

Perhaps Marshall was afraid that the true story of Beverly Donofrio -- disseminated in a blockbuster film -- would threaten the endowments of prestigious universities across the country. Fifteen-year-old girls everywhere would suddenly be inspired by this teen mom as role model to get pregnant and apply for full scholarships. Perhaps Marshall is secretly funded by one of those abstinence-only sex education groups. Perhaps Marshall never got around to reading Donofrio's book.

But whatever the director's motives, she has completely dismantled the story of Beverly Donofrio and reassembled it to fit a very old mold, one that emphatically portrays teenage motherhood as a tragedy with many victims, a terrible mistake that must be derided in art as in public service announcements -- with a ham fist and plenty of clichés.

Donofrio's book is about a girl who very clearly chooses to escape a conventional life -- in her case, a working-class family with a traditional cop father and a submissive housewife mother -- for an unconventional life of being an unapologetic bad girl, then a smart, unapologetic bohemian single mother. Her pregnancy is most certainly accidental, but the pleasure she takes in her child, her life as a single mother and her writing is genuine, all the more so for being a pleasure she has earned through choosing how she would most like to live.

Marshall's Donofrio is broken at 15, the moment her life deviates from convention. And she never gets it back.

Instead of going to college, we see Drew Barrymore's Bev whine to her mother that her 2-year-old son won't leave her alone while she is studying for her GED. We see her lose a college scholarship because her junkie husband doesn't show up to babysit, and she has to drag her 3-year-old to the interview. (A voice-over from her grown-up son, who inexplicably is the omniscient narrator of a film based on a book written by his mother, solemnly intones: "It's family legend and a huge deal in her book the day she didn't get her scholarship. But to me, it's not about how Ray [her husband] let her down, but how my mere presence at the age of three was enough to cost her her scholarship.")

We see Bev's hopes dashed again when she is 22 and her husband buys drugs with their savings, which they planned to use to move to California where Beverly could attend Berkeley. We see her mooning around, conferring the kind of reverence usually reserved for minor deities on friends who have achieved her "dream" -- a college education at NYU, followed by a master's degree and a life as a writer in New York City.

Every one of these scenes, as far as I can tell, is fabricated by a scriptwriter who seems hellbent on turning a story of success into one of failure. The real Beverly Donofrio, according to her memoir, never studied for her GED with a 2-year-old; she became pregnant at 17 -- not 15, as the movie suggests -- and she finished up high school while pregnant. The lost scholarship is not a huge deal in her book: Like an earlier quote in the movie, supposedly taken from the book -- "Life is really only four or five big days that change everything" -- it isn't there at all.

Also according to the memoir, the money that Ray blew on junk was earmarked for a Harley. (The young Bev really dug motorcycles.) And the only time she mentions California is in a passage in which she is writing about how "really happy" she and her best friend, also a teenage mother, are during the period they live together with their children: "True, we both had failed marriages," she writes. "True, we were both on welfare. True, we had little kids keeping us from hitchhiking to California or through Europe, joining a commune, and about a million other things we could be doing in the world, but here we were, best girlfriends living together with our kids." (The movie skips this part, and most definitely never shows the Barrymore Bev on welfare.)

And Beverly Donofrio earned her undergraduate degree from Wesleyan and her master's degree in creative writing from Columbia, both arguably better schools than NYU, at least if one goes by the ranking systems in US News and World Report (which the status-grubbing movie-version Bev most certainly would have done).

The revisionism committed by director Marshall and her scriptwriter, Morgan Upton Ward, goes beyond the usual dumbing down we've come to expect anytime Hollywood gets its hands on a well-written book. It was not simply a matter of cobbling together composite characters, condensing scenes or simplifying dialogue. Instead, Marshall and Ward have taken the true story of a scrappy working-class girl who gets knocked up, smokes pot and rides around enjoying her youth until she decides it's time to get herself together, and have turned it into the story of a bitter, failed teenage mother who blames her kid (parents and husband) for everything bad that happens to her, and manages, not surprisingly, to wreck her own life and that of her son.

As a teenager and young adult, Barrymore's Bev is a caricature of a kid raising a kid, the kind of mother who has so many problems of her own that she can't be bothered to make the maternal sacrifices required to fit the definition of a "good" mother. As an adult, movie Bev is a controlling shrew, the worst kind of stage mother, who expects her child to live out the "dreams" (that word again) she had for herself.

Predictably, Bev's combination of malignant neglect and manipulative micromanaging turns her son into a resentful, overburdened martyr. From the moment the movie version kid can speak, he is his mother's keeper, a prissy, prudish tattletale and tyrant. "We're supposed to be a team, right?" says Bev (who by this point in the movie is exhausted from her schedule of night classes and the double-shift waitress job that Marshall has inflicted upon her, after taking away her scholarship, her man and the goodwill of her parents, friends and children -- at an age when Beverly Donofrio herself was graduating from an elite college, not working and living with socialists.) "No!" screams Jason. "You're supposed to be the mother and I'm supposed to be the kid!"

Beating this truth -- be a mother, not a kid -- into the brain of Barrymore's Bev is the theme of Marshall's movie. Which is why we are treated to over two hours of watching her character endure the punishments of a sadistic director until finally her son forces her to admit that he is not "normal," he is not in "one piece" and, in fact, Bev is pretty much to blame for every bad thing that has happened to her son.

But Donofrio's true story -- as she tells it in her book -- shows how much she and her son end up being alike as adults. Like his mother, Jason is an urban Manhattanite, who dresses in all black, hangs out in the pool hall and becomes something of a high-school slut himself -- nothing like the preppy, Eddie-Bauerish, judgmental prig in the movie version, whose sole goal is to move in with his true love (conveniently portrayed as the daughter of his mother's best friend, whom he protected as a child when they were both suffering from the bad parenting of their teenage mothers) in Indiana (which is especially funny, considering that real-life Jason is quoted as saying that the worst thing about going to school in Connecticut is that anyone who lives outside New York City must be stupid).

What, exactly, is so threatening about a teenage mother who goes to a good college and raises a good kid? What is the social value in refusing to tell any story of teenage motherhood that does not end with the lives of both mother and child in complete and total ruin? Do we really want to raise a generation of kids who believe that mistakes -- or conscious decisions -- cannot be revised and revisited, that "Life is really only four or five days that change everything"?

In 1991, I believed myself to be some sort of pioneer, the first teenager ever to carry Foucault in a diaper bag. I should have known better. Donofrio did it before me and many more did it after. How strange to find that the ordinary lives that we have led are considered to be so extraordinary, so radical, so unpalatable, that mainstream directors like Penny Marshall have to create outright lies about how we live because the truth still isn't acceptable.