The candy-colored French hit from one of the directors of "The City of Lost Children" never lets you forget how charming it is. 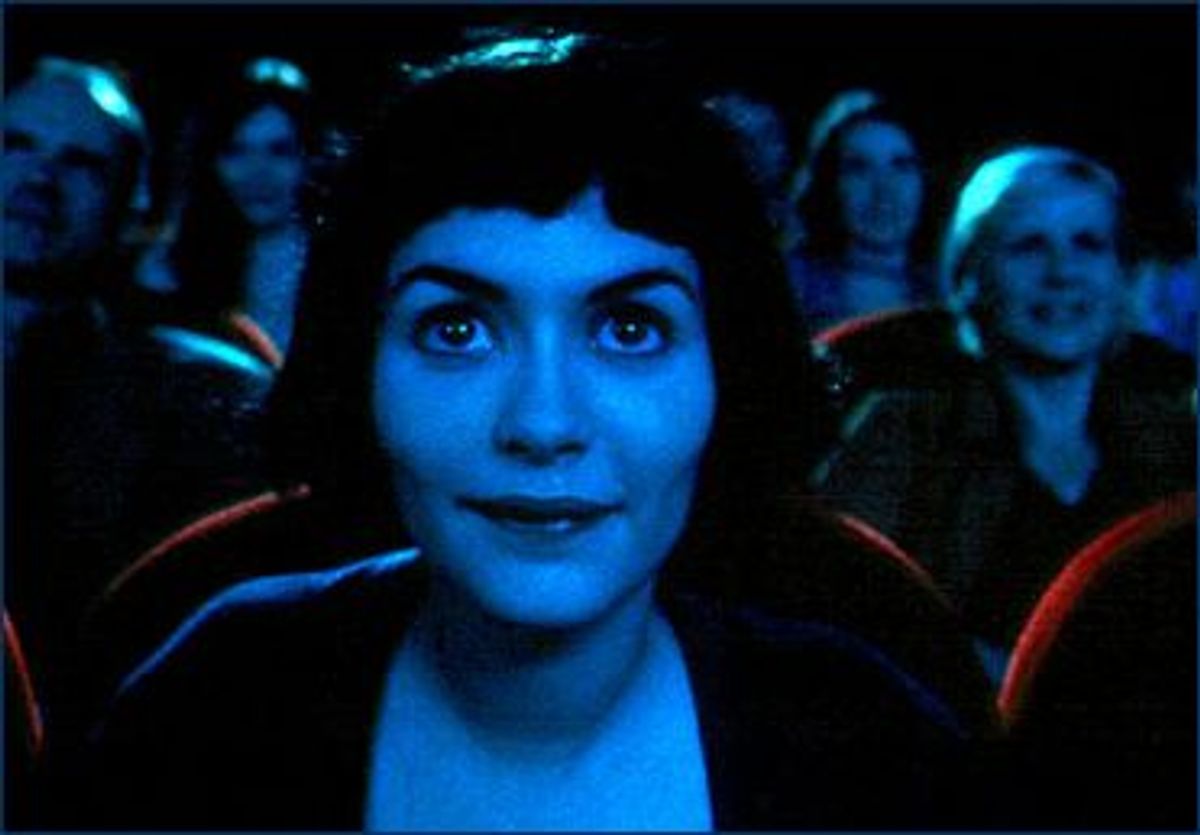 If Terry Southern's novel "The Magic Christian" were produced by the folks at the Welcome Wagon, the result might be something like "Amélie." "The Magic Christian" is about a millionaire who uses his money to set up a series of elaborate and vicious practical jokes to demonstrate that everyone has his price. It's a book written for the vengeful adolescent in all of us. "Amélie" is a movie made for the wide-eyed child we'd like to flatter ourselves exists in all of us. The title character (played by Audrey Tautou) is a cafe waitress who takes it upon herself to become a sort of do-gooding practical joker, setting up a series of schemes and pranks that will bring happiness to the people she targets.

"Amélie" has been a phenomenon in France, causing lines around the block and taking in the equivalent of nearly $40 million. It wouldn't surprise me at all if the movie were a big art-house hit here. Directed by Jean-Pierre Jeunet, who, with Marc Caro, co-directed "Delicatessen" and "The City of Lost Children," "Amélie" is clever and skillful and pleasing to look at. The bright colors are like inviting pieces of candy, and cinematographer Bruno Delbonnel has given even the muted browns and dark reds of the interiors a deep, cozy glow. And in many ways "Amélie" is just what audiences seem to crave right now. Who could blame moviegoers for latching onto a picture that's intended as an affirmation of what connects people rather than what divides them, that says it wouldn't kill us to treat each other a little more decently?

The problem is that the charm and good spirits of "Amélie" feel calculated rather than natural. Jeunet has said that, after making "Delicatessen," "The City of Lost Children" and "Alien Resurrection," he wanted to make a movie that wasn't so dark. What links "Amélie" to those movies is that Jeunet is still in love with fantasy and with the trickery that movies are capable of. Amélie herself is a lost child in Paris. The movie opens with flashes of her childhood. We're told that she so craved affection from her cold-fish father, a doctor, that whenever he examined her, her heart would beat uncontrollably, leading him to decide she had a weak ticker and that she should be shielded from excitement by being home-schooled. The doc is all she's left with after her mother is killed in a freak accident, and by the time she moves to Paris as a young woman she's led a very sheltered life. The kicker, of course, is that she winds up in a city where the worldly people she meets -- her co-workers at the cafe and the people in her apartment building -- are just as alone as she is.

It's a recovered bit of childhood fantasy -- a boy's box of childhood treasures that she discovers hidden behind a wall in her flat -- that sends Amélie on her mission. She engineers the box's return to its owner, making him think that fate alone has reunited him with his lost treasures, and observes the happiness it brings him. From there, she's off, playing matchmaker between a surly cafe customer (Jeunet regular Dominique Pinon, with his pushed-in face and protruding lips, the mug of a pipsqueak tough guy) and the cafe's hypochondriac tobacconist (Isabelle Naty, whose sturdy build stands in comic contrast to her affected sickroom demeanor). Amélie brings a taste of the world's delights to a delicate artist (Michel Robin) who hasn't left his apartment in 20 years, and acts as an avenging angel against a grocer (Urbain Cancellier) who mistreats his sweet, simple-minded assistant. And she makes her concierge (Yolande Moreau) believe that the woman's long-dead philandering husband went to his death in love with her.

The best of Amélie's schemes -- one that appropriates an old urban legend -- is the one that isn't explained until the end. Stealing her father's favorite garden gnome, she arranges for her dad to receive a series of Polaroid snapshots of the gnome at the world's most famous tourist spots. Seeing the hilarious shots of the gnome taking in the Statue of Liberty or the Sphinx, Amélie's father begins to realize what his daughter could never make him acknowledge: the lonely restraints of his own housebound life. When we finally discover how Amélie has managed to get the shots, it's a good payoff. But the real pleasure of the running gag is the loopy notion of a jet-setting garden gnome, happily mailing off holiday snaps.

Jeunet has modeled the film on the '30s pictures where each Parisian neighborhood is a small village and all the inhabitants know each other. The movie has echoes of Carne and Prevert's dada comedy "Bizarre, Bizarre," and the delights of Rene Clair, like the musical "Le Million." The trouble is that those movies achieved their charm with the simplest possible means (the smallness was part of the charm) and Jeunet is addicted to gimmickry. He fills the wide screen with bursts of light or a background giving way to a fantasy sequence while the dreamer remains in the foreground, with zooms and cutting and odd angles. It's inventive gimmickry, but it makes the sweetness a concocted thing rather than a natural outgrowth of the material and setting and mood. In Disney's new "Monsters, Inc." it's a joke when the film briefly plunks down in Paris and there's accordion music playing -- that's our movie-fed idea of Paris. But Jeunet uses the same music here without any irony, an old-movie trick to evoke an old-movie response.

"Amélie" has been hailed as a valentine to Paris, but what makes Jeunet's wizardry so ill-suited to that tribute is the whole tradition of French film which located the enchantment of Paris in real settings. The '30s en plein air tradition of shooting on location was later taken up by the new wave directors of the '50s and '60s, who took the camera out of the studios and into the streets. There's more charm in the footage of the actual Parisian streets and cafes of Agnes Varda's "Cleo From 5 to 7" (available beautifully remastered on a Criterion DVD) or, to take more recent examples, in Olivier Assayas' "Irma Vep" or Jacques Rivette's "Va Savoir," than in all of "Amélie."

It's hard to be charmed, hard to think of a movie as a delightful trifle, when you're so conscious of how hard the filmmakers are working to make it charming. I love the idea of "Amélie," and I'm usually a sucker for movies where stray bits and pieces come together in unexpected ways. But "Amélie" never lets you forget that you're being played. It never lets you relax and sink into the fantasy. It's a little like eating at those restaurants where you find your napkin refolded whenever you come back from the restroom -- at some point, such determined pampering becomes oppressive.

The movie's calculation extends to Audrey Tautou. She's adorable all right but everything about her -- from her unkempt Louise Brooks bob to her perpetually big eyes, which keep looking into the camera with conspiratorial mischievousness, to the red slash of a mouth like that of a chaste coquette -- has been carefully designed to be adorable. The movie begins with flashes of Jeunet's particular brand of black humor (particularly the manner of Amélie's mother's death), and there's a great salty gag when Amélie, now a young woman alone in Paris, tries to imagine how many couples are having an orgasm at that moment. Jeunet gives us a razor-sharp, whip-fast montage of couples of all ages and sizes reaching la petite mort, turning the city into a happy cradle of oblivious, ecstatic fucking.

But the film quickly sheds any tendency toward black humor or sensuality in favor of its sexless pixie heroine. Why is it that the kids in "The City of Lost Children" -- the little girl with the knowing air of a doomed, romantic heroine; the toddler who happily gobbled down whatever food he could lay his hands on, a born sensualist; the wised-up tough little street kids -- were so decidedly unsappy, and yet Amélie is meant to be wonderful because she's a wide-eyed little girl? The young man of Amélie's dreams, Nino (actor-director Matthieu Kassovitz), a fellow who collects discarded photo-booth snapshots into albums of random faces, has been given a job as a clerk at an adult video store for seemingly no other reason than for Amélie to look shy and embarrassed when she walks into the place to find him.

Much of the last section of the movie is made up of Amélie's pursuit of Nino, and it's irritatingly pointless. Why does she lead him on a wild goose chase when she's clearly crazy about him? Watching her execute another step in the scavenger hunt she's devised for him is like seeing "The Rules" reimagined by Rube Goldberg. And am I the only one who finds Amélie just a tad creepy? When one of her schemes goes wrong, the movie shies away from suggesting that maybe intervening in other people's affairs can have unwanted consequences -- it's not just Amélie that's blithely unaware of those consequences, it's Jeunet.

Panning "Amélie" is probably the quickest way for a critic to get himself thought of as cynical and unfeeling. But "Amélie" can make you feel divided against yourself: admiring of all the inventiveness that's gone into it even as the calculation of that charm holds you at arm's length. It's not that I don't want to be charmed by a movie (right now, a slice of genuine charm would be manna from heaven). I just don't want to be worked over, prodded into being charmed. It's possible to make a movie about an innocent do-gooder that doesn't drown in sugary goodness. The 1935 "The Good Fairy," an adaptation of the Molnár play written by Preston Sturges, directed by William Wyler and starring the heavenly Margaret Sullavan managed it (and I would bet that Jeunet and his co-screenwriter Guillame Laurant had that movie in mind as one of their models). "Amélie" has the weird effect of people who come up to you at a party and insist that you should have a good time. You might actually enjoy yourself if it just gave you some space.