The new animated feature from Pixar has too much Disney pap and not enough Gothic. 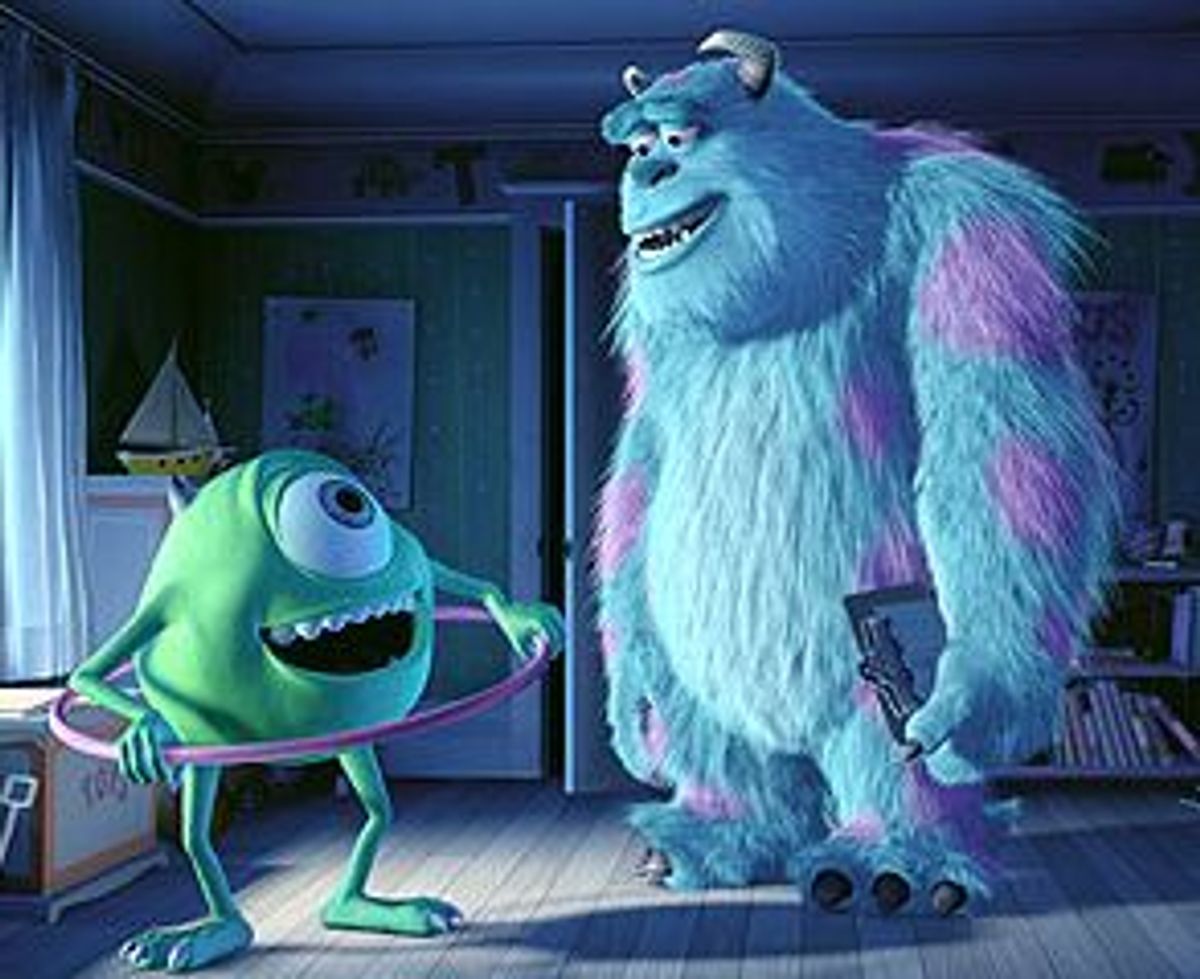 My wife and her four sisters all have a habit of leaving closet doors open and dresser drawers halfway out. If you're married to one of them, it can make a nighttime trip to the bathroom in a dark house a veritable obstacle course. So in the first years of my marriage, I got my wife to shut the bedroom closet at night by asking her the thing all kids know: What happens if you leave the closet open? Why, the monsters come out, of course.

The monsters keep coming out of closets in Disney's new Pixar feature, the computer-animated "Monsters, Inc." They're the denizens of a city named Monstropolis, reached via the bedroom closets of small children. The city relies on the energy generated by children's screams to power it, and Monsters, Inc. is the company that sends its most terrifying personnel to spring out of those nighttime closets to terrify kids.

This premise bears some resemblance to Henry Selick's "Monkeybone," where nightmares power a netherworld, and also to the French film "The City of Lost Children," in which a mad scientist attempts to steal children's dreams. And Selick or Tim Burton could have done something great with it. Disney, though, doesn't have much taste for the gothic, and "Monsters, Inc." is rendered in the same cheery and bright mood of the two "Toy Story" pictures and "A Bug's Life."

Like those movies, especially the latter, it's agreeable and often funny, and adults who take their kids to see it might be surprised to find themselves having a pretty good time. It maintains a fairly brisk pace (though 90 minutes is a hell of a long time for any cartoon to sustain itself). It's the thought of what it might have been in different hands that keeps it from being more enjoyable.

The monsters here are scared of only one thing: little kids. Let some hapless monster come back with so much a discarded sock and it's enough to send the decontamination squad into high alert. The plot is kicked into gear when Monsters, Inc.'s top scarer, a big, green galoot named Sulley (voiced by John Goodman), accidentally brings a little kid back with him from a nighttime visitation.

Boo (Mary Gibbs), as he comes to call her, has the big eyes of a Walter Keane painting and the oversized noggin of a Bobbin' Head doll. Sulley is too cuddly to be frightening to her and she happily runs riot over the place Sulley shares with his buddy and coworker Mike (Billy Crystal). Meanwhile, her assigned monster, Sulley's nemesis, the slimy Randall Boggs (Steve Buscemi), terrifies Boo and spends his time trying to track her down.

There's potentially a great comic idea in this: the monstrousness of kids, who are able to suck the energy from any adult in a mile radius and still be adorable while they do it. Next to Boo, Sulley and Mike (who's like a friendly green version of the invaders from the old B-movie "The Eye Creatures") are every harried parent you've ever seen.

But neither the co-directors (Pete Docter, Lee Unkrich, and David Silverman), nor the screenwriters (Andrew Stanton and Daniel Gerson) are tough-minded enough to explore that idea. They want Boo to be a cute, huggable little booger, when they could get much bigger laughs by making her a hellion.

The chase plot, with Sulley and Mike trying to return Boo to her own safe little bed and hide her from the authorities while Randall hunts for her, wears down pretty quickly. Luckily, it's an excuse for some good gags (though not enough) and character work. There's a nifty inside gag tribute to the stop-motion animator Ray Harryhausen. There's a funny globehopping sequence with Sulley and Mike zipping through an assortment of international closets, and a chase scene near the end with Sulley, Mike, and Boo zipping through a veritable rollercoaster of bedroom doors that's an attempt to mimic the chase scenes that you find in the best of Aardman Animations' work. It doesn't come close, but on its own terms it's pretty neat. (There's also a direct lift from Chuck Jones's great cartoon "Feed the Kitty" that only brings back memories of how funny the original was.)

The performers bring some distinction to their cuted-up characters. Listening to John Goodman's voice emanating from the furry good guy Sulley makes it seem like the essence of Goodman's big, likable lug persona. He may be more enjoyable here than in many of his recent live-action appearances. Billy Crystal is a bit too on, but Jennifer Tilly's breathy scratch of a voice finds a great match in Mike's girlfriend, Celia. She's a one-eyed looker with hair made up, Medusa-style, of snakes (they rattle when she gets mad). Funniest of all is Bob Peterson as Roz, the office shrew, a behemoth slug with a steel gray mohawk, harlequin glasses, and a cupid-bow patch of lipstick where her lips would be, if she had lips.

As always in a Pixar feature, there are some amazing effects -- especially the sight of Sulley's fur, dotted with snow flakes, blowing in a Himalayan blizzard. But computer animation continues to leave me cold. It's "real" all right, but why should animation attempt to seem more "real"?

"Monsters, Inc." is an agreeable good time. But good within the Disney sensibility means it's about a third as good and funny and crazy as the work animators from Tex Avery and Chuck Jones right on down to Nick Park have given us. We don't, for instance, get to see what could be the funniest sight of all: the monsters at work, scaring little kids.

Maybe the filmmakers thought kids wouldn't warm up to the characters if they showed them jumping out of kid's closets. (Though, in the context of a comedy, that might free kids up to laugh at their bedtime phobias.) At one point, Sulley's boss Mr. Waternoose (James Coburn) complains that kids today are harder to scare; that's a weird complaint in a movie so devoid of the pop culture energy that kids today feed on. (There isn't a video game, a rock poster, a stereo or CD in sight in any of the kids' bedrooms we see.)

These aren't jaded kids -- they're inhabitants of the Disney neverland. Doesn't anybody there know that, today, entertainment for kids means "The Matrix" or "X-Men" or MTV, or even the dark moments of the Harry Potter books? And, as always, there's the requisite amount of Disney sap: a little lesson that the laughter of children can be more powerful than their fears. Ugh. "Monsters, Inc." needs a shot of the storybook scariness that gave "The Nightmare Before Christmas" its kick. It's a nice movie. But Disney has never learned that "nice," especially in comedy, is a negative virtue.