Jordan may be the greatest basketball player of all time, but as a role model, he's an airball. 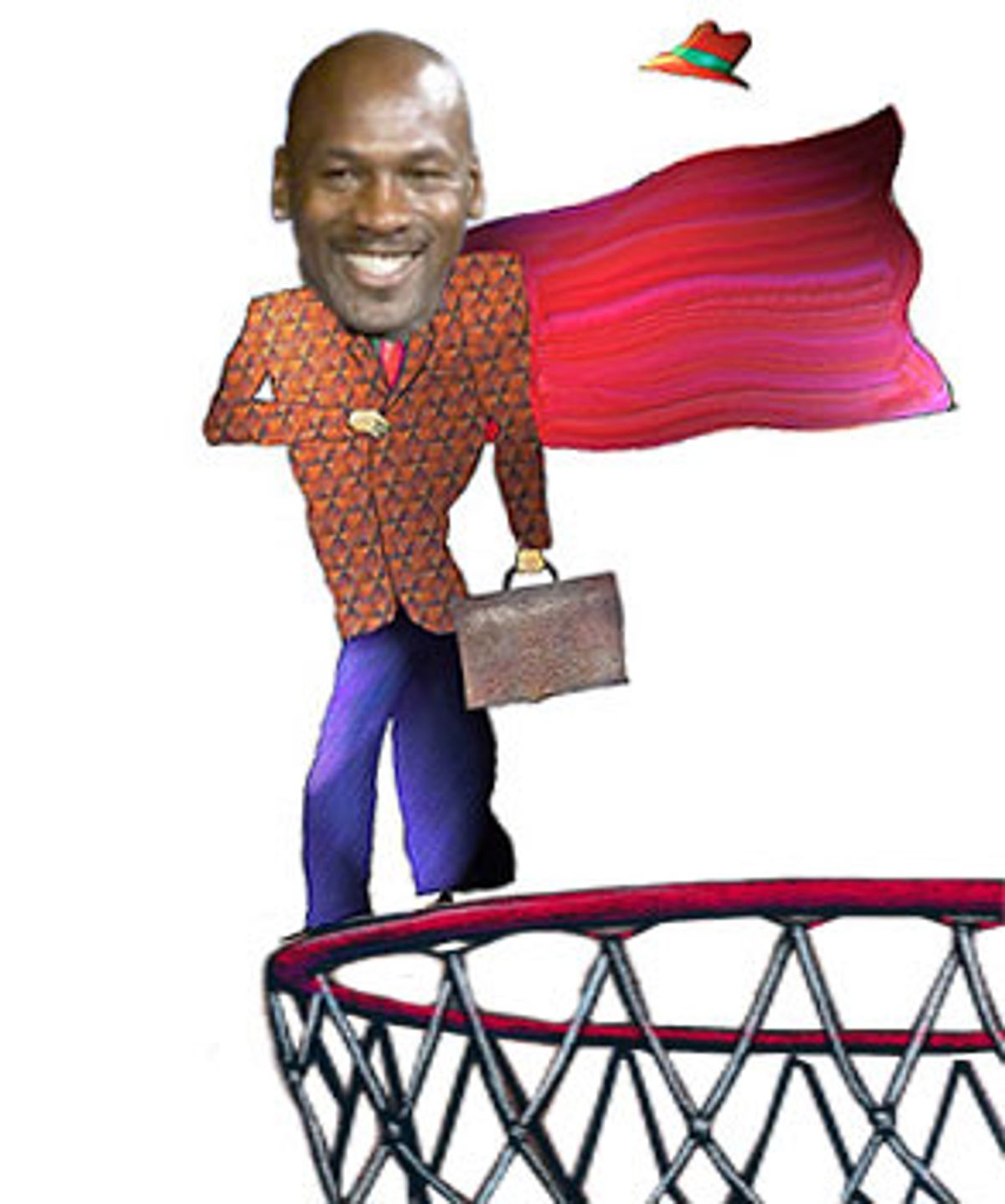 Washington, and the rest of the world, can't wait to see Michael Jordan play competitive basketball again, but his return doesn't come without misgivings. Some critics have worried publicly that Jordan -- a step slower, a bit older -- may sully his legendary career, ended so spectacularly with that last shot against the Utah Jazz in the 1998 NBA finals.

What worries me, however, is the coronation of the public Michael Jordan, and the "be like Mike" mantra that will soon reemerge. I propose that we pause a moment, before the revisionist history becomes biblical dogma, to consider a few reasons not to deify the man.

Failed franchise manager Jordan's return to the Wizards has to be at least partly motivated by a desire to get out of the responsibilities he sought as president of basketball operations for the Wizards, and at which he has done a less-than-spectacular job. Because he has to sell his ownership stake in the team, and yield his management role to make his (second) comeback, Jordan will have a ready excuse to abandon the Wizards and Washington area altogether when he re-re-retires. Those who think he is hanging around Washington after he stops playing this time are the same people still holding their positions with iVillage.com.

Manipulative marketer When he retired the first time, Jordan requested that his jersey No. 23 never be used again. So, when he first came back, he used No. 45, and of course millions of kids -- some of them from poor families, it must be said -- begged their parents to buy them the new jersey. Then Jordan went and changed his mind and asked the Bulls to un-retire No. 23. Some suggest this was a giant marketing ploy to generate sales of the No. 45 jersey that nobody had owned until he started wearing it. Whatever the case, and no matter what number he wears for the Wizards, a whole new marketing opportunity now exists for Washington jerseys and related paraphernalia.

Spiteful egoist Jordan's minor league baseball league venture was little more than a glorified, one-man fantasy league farce. Nevertheless, it went largely unchallenged by the same sports media that scoffed when Ed "Too Tall" Jones tried to box after his football career ended. Jordan wasted a lot of people's money, time and attention to satisfy a personal curiosity that almost no other person with middling high school baseball chops would be able to even attempt. It's hard to imagine his move to baseball was not motivated in part by a spiteful, thumb-in-your-eye desire to prove to Scottie Pippen, Phil Jackson, Jerry Krause and Jerry Reinsdorf that the Bulls could not win without him. They couldn't, of course, but what an elaborate scheme he dreamt up just to prove it.

Media intimidator When Jordan returned to basketball from his baseball fantasy camp, he promptly blackballed Sports Illustrated for its "Give it Up, Michael" cover. The image had given us Jordan striking out -- literally and metaphorically -- as a Birmingham Baron, but this is the same magazine that put Jordan on its cover more than any other athlete. Many otherwise fearless sportswriters took note of the rebuke, and the flattery they deliver Jordan is ceaseless.

Pretentious brat Jordan dressed in his own private section of the Bulls locker room, separate even from his own teammates. Though the NBA requires that locker rooms be open for 45 minutes before each game, he rarely allowed reporters to interview him during this time. Granted, Jordan has a hard time guarding his privacy. But his insistence on being treated with a double standard came up again and again over the years. Is it any wonder the other players wouldn't pass him the ball in the NBA All-Star games during his early seasons?

Greedy -- but failed -- union breaker In the mid-'90s, Jordan, Patrick Ewing and several other clients of high-profile agent David Falk tried to break up the NBA players' union. The union had been created decades earlier by Bob Cousy and other legendary players of that generation, and had Jordan succeeded, many of the provisions protecting the vast majority of players (including pensions and salary minimums) might have disappeared.

Corporate shill According to Fortune magazine, Jordan's endorsements constitute the greatest assemblage of sports sponsorships ever. But Jordan has shown little concern about the social implications of his sponsorships. He hardly batted an eye at the accusations of wage, labor and health abuses by Jordan-sponsor Nike in its treatment of employees in Southeast Asia.

He's no Ali Through the fawning of reporters like fellow North Carolina alum Stuart Scott (motto: I'm the new Ahmad Rashad!), ESPN anointed Jordan the greatest athlete of the 20th century. But Jordan's contribution simply doesn't compare with that of Muhammad Ali. Both athletes exhibited personal athletic greatness, and advanced their respective sports. But the societal impact of Ali's career and life dwarfs Jordan's. Faced with moral dilemmas that challenge his career or lifestyle, Jordan invariably balks. Ali gave up his heavyweight title belt for five years, lost uncounted millions, damaged his standing in the sport and with the greater public and even risked imprisonment for his refusal to be drafted during the Vietnam War.

Michael Jordan is certainly the greatest and most exciting team athlete of all time. He has given money and time to a number of charitable causes. But he is simply not a role model, and he should not be treated as such. Skeptical? Try this interesting experiment: Imagine for a moment that the above points came from Allen Iverson's résumé.

Whoa! Sports media snobs would never stop ranting about Iverson's immaturity and selfishness. But Michael Jordan, with his clean, corporate image and Cheshire cat smile, gets a free pass. And all because he has the sweetest fadeaway jumper and mid-air acrobatics of all time. We can enjoy his basketball prowess, and we can even root for him. But let's not be like Mike.