Bush says he won't stop bombing during Ramadan. But the tactic could blow up in our faces. 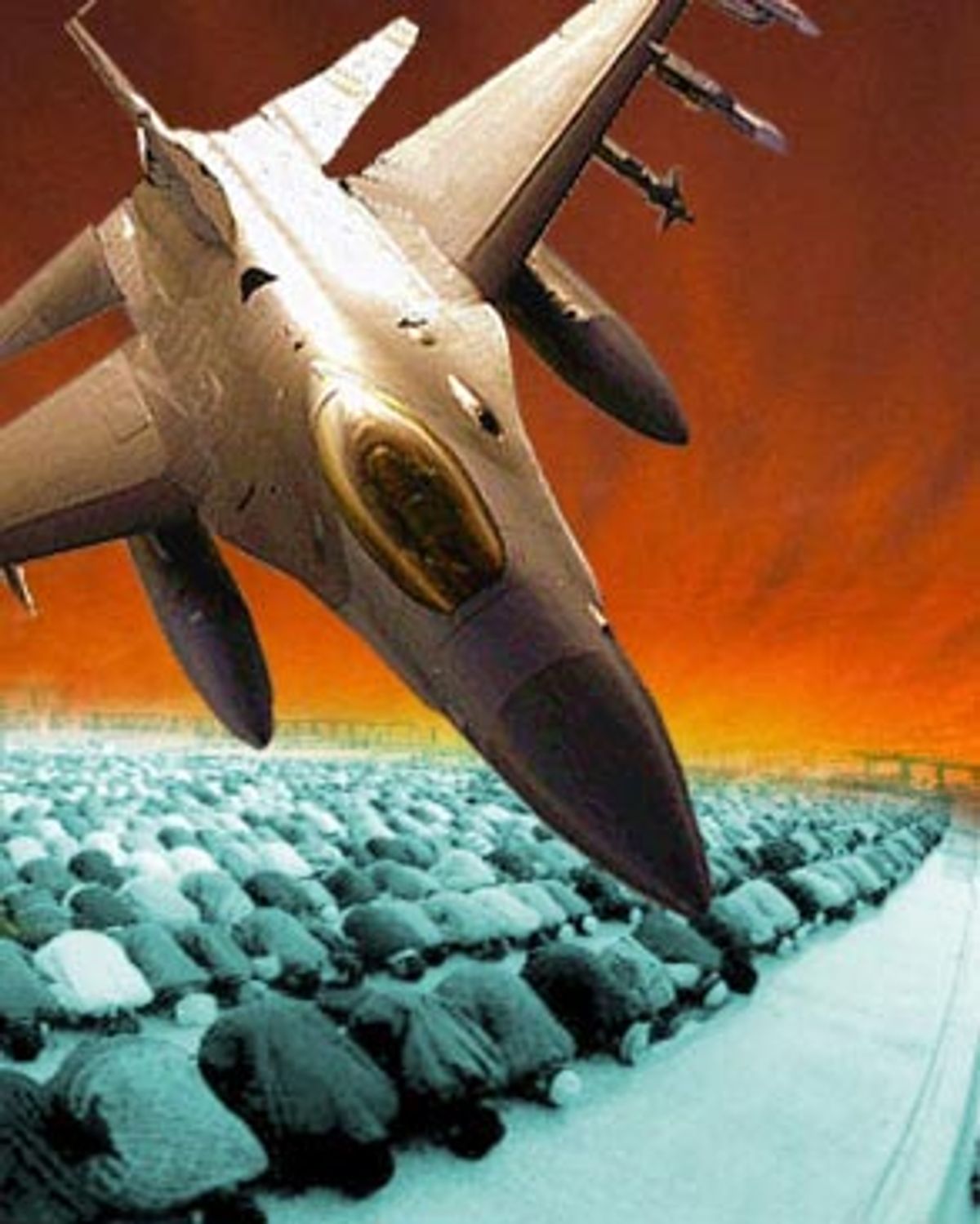 American military planners seemed temporarily stumped last month when Muslim allies in the war on terrorism began suggesting the United States halt its bombing campaign in Afghanistan during the Muslim holy month of Ramadan, which this year begins Nov. 17.

After days of persistent questioning, Secretary of Defense Donald Rumsfeld announced there would be no stopping for Ramadan, telling reporters, "History is replete with instances where Muslim nations have fought among themselves or with other countries during various important holy days." Besides, Rumsfeld noted, the al-Qaida terrorist network was "unlikely to take holiday." President Bush backed Rumsfeld on Friday. "The enemy won't rest during Ramadan and neither will we," Bush said.

End of discussion, in the U.S. anyway. As Newsweek's pithy "Conventional Wisdom" column put it: "Forget talk of a Ramadan ceasefire. They fast and fight all the time."

The debate over a Ramadan bombing halt, however brief, highlighted both the unusual lengths to which the U.S. might have to go to keep its tenuous coalition together, as well as the pitfalls of fighting terrorist organizations instead of state-run armies, with whom official ceasefires can be negotiated.

But Middle East experts suggest the issues surrounding Ramadan, like so many Islamic cultural questions that have arisen since Sept. 11, have been badly misunderstood by American policymakers and the general public, as the Muslim and Western worlds continue to talk past each other.

The question was never whether Muslims fight during Ramadan. Clearly, history is filled with examples when they did. Mohammed himself led men into battle during the sacred month. What's worth asking is how Ramadan bombings will be received inside already anti-Western Muslim countries during their holiest month of the year, and at a time of heightened religious fervor.

Most important, how will that reaction affect regimes in the Islamic world? Already nervous about widespread opposition in the streets to the bombings, governments allied with the U.S. will almost certainly face increased hostility at home during Ramadan. Currently the coalition holds its collective breath on Fridays, when conservative mullahs in Pakistan urge the devout to make the Muslim holy day one of protest, testing the government of Gen. Pervez Musharraf with anti-U.S. demonstrations on a weekly basis.

During Ramadan, though, mosques will be filled every day, and Musharraf, along with other Muslim leaders, will face a month of Fridays. During the lunar month, millions of Muslims will pour into mosques on a daily basis, gather for nighttime festivities and experience a renewed sense of community as they go from home to home for family reunion-style dinners each sundown. And what's likely to be the No. 1 topic of conversation inside the mosques, during the festivals and around those dinner tables during Ramadan? Afghanistan.

It's no accident that Pakistan's Musharraf, perhaps the most visible supporter among Muslim leaders of America's military campaign, was the leading figure beseeching the United States to halt its bombing campaign during Ramadan, to no avail.

"Musharraf knows he'll be under such intense pressure once Ramadan starts," says Akbar Ahmed, chairman of the Islamic studies department at American University.

"The silent majority is still sitting on the fence," Pakistani editor and political commentator Najam Sethi told the Baltimore Sun last week. "But at some point, their emotions will be frayed and they may jump in and protest. With the onset of Ramadan, Musharraf will be put to the test."

Secure in their decision to continue the bombing, American officials may not be giving these social and cultural dynamics much thought, but their Arab and Muslim counterparts certainly are.

"The danger of public opinion is what's most important for the Arab governments," says Chris Toensing, editor of the Middle East Report. Serious public opinion fallout could cripple America's coalition to fight terrorism in the future.

And there is a real chance that because of the way Ramadan alters the rhythms of life in the Muslim community, that public opinion, already firmly opposed to the bombing, could harden into something more dangerous as moderate positions are abandoned.

"The whole pace of life changes during Ramadan," explains Jillian Schwedler, assistant professor of government and politics at the University of Maryland. "There is so much downtime when you're fasting there's more time to talk about politics. That's the most important element of this, how the social interaction changes. Will it matter? Maybe, maybe not. That's the wild card."

Militarily, there's a clear consensus that a monthlong bombing halt would not be feasible. "It's got to continue," says retired Army Gen. William Nash, now a senior fellow at the Council on Foreign Relations. "At the same time we need to show respect for the Islamic religion and make clear this is war against terrorism and not a war on a religion. You manifest that respect by saying it, and by being very careful in your selection of targets."

To manifest respect, though, there needs to be trust, which is nearly nonexistent in the Arab and Muslim world, and a key reason why Ramadan looms so large.

Seen through Arab and Muslim eyes, the weeks since Sept. 11 have offered examples of unrelenting disrespect: the mounting number of civilians killed by errant American bombs, a hampered humanitarian relief effort, Afghan refugees chased from their mud huts as winter approaches, continued violence in Palestine, unsubstantiated suggestions from the White House that Muslims may be responsible for the anthrax attacks in America and more than 1,000 people detained in the U.S. in connection with the Sept. 11 attack (many of them Arab or Muslim, including one Pakistani who died in custody). Against that backdrop, there is so little good will toward America among Muslims overseas that the Ramadan question has taken on a life of its own.

"It's not about Ramadan itself," says Michael Sells, a professor of religion at Haverford College, and an expert on Arabic literature. "It's about the power of the symbol and how it's used and attached to other factors. If there were trust [between Muslims and the West] it wouldn't be as dangerous an issue."

"It's becoming very complicated," says American University's Akbar Ahmed, referring to the collateral issues upsetting Muslims about the bombing campaign. "The strands are too many now. Muslims were horrified and outraged by the Sept. 11 attacks. But there is now a disconnect with what's happening in Afghanistan, with women and children in villages being bombed, forced to the Pakistan border to escape."

He says with the onset of the holy month, when Muslim "feelings are excitable, that disgust might translate into widespread anger and fury. It's very volatile right now. It's like a volcanic rumbling at a subterranean level."

Ramadan is the ninth month of the Muslim's lunar calendar, the time during which it's believed the prophet Mohammed, in 610 A.D., received the first revelations of the Quran from Allah through the Angel Gabriel. (It is to Muslims what the receiving of the Ten Commandments from Mount Sinai is to the Jews and Christians.)

Often referred to as the springtime of the Islamic year, Ramadan is a time for daytime fasting, worship, quiet contemplation, charity and thanksgiving. Ramadan ends this year on Dec. 17 with the traditional Eid al-Fitr, or the Festival of Breaking the Fast, the second highest holy day for Muslims each year.

Ramadan is similar to the Catholic season of Lent, says Sells at Haverford College. "But it's immeasurably more powerful socially. It has an extraordinary way of giving a sense of community through family and the general society."

It's that deep sense of an extended Muslim community, felt so acutely during Ramadan, that may stir passions this year. "There is a genuine sense that people in the Muslim world want their brothers and sisters in Afghanistan to be able to celebrate the holy month," says As'ad Abukhalil, associate professor of political science at Cal State Stanislaus, and author of the upcoming book "Bin Laden and the Taliban."

He notes, "Muslim sentiment is turning overwhelmingly against the war, and governments are getting scared. They're worried about crowds that will gather and exchange information during Ramadan."

Adding to Ramadan troubles for the regimes is the fact that during the holy month, governments have traditionally loosened their grip on the population, however briefly, by allowing more public assemblies and often releasing some prisoners as a sign of good will.

But this year governments will likely have to do the opposite, curbing large public gatherings for fear they might grow into unruly antiwar demonstrations. And since the regimes are, in theory, supporting America's war on terrorism, the demonstrations could become anti-government rallies.

"Governments are in a bind," says Abukhalil. For their own protection, "they need to oppress and repress, but they can't go as far as they'd like during Ramadan. They'll need to show some restraint."

Also, mosques, sure to be crowded throughout Ramadan with faithful witnessing oral readings of the entire Quran, serve as the lone meeting location throughout the Arab world that governments cannot control.

"In Muslim countries, the mosque is the one place no dictator can forbid you from going. They can forbid public assembly. But for one month people are gathering in groups and socializing and talking, and no leader can prohibit that," says Charles Kimball, chairman of the Religion Department at Wake Forest University.

That's not to say that Ramadan represents a fuse that will automatically ignite the region. "My gut tells me it will matter, but it won't radically change things," says Schwedler.

"If the bombing operation continues during Ramadan I wouldn't expect a wave of revolution in the Islamic world," notes Toensing at the Middle East Report. "But the level of protest would rise, as would government repression of those protesters. And government rhetoric against the campaign would become sharper in tone."

British Prime Minster Tony Blair received a preview of that sharper tone last Wednesday. Traveling to Damascus to visit Syrian President Bashar Assad, Blair stood beside Assad at a joint appearance as the Middle East president telegraphed his impatience with the campaign, telling reporters, "We cannot accept what we see on the screen every day; hundreds of innocent [Afghan] civilians dying."

It's a Muslim theme that may grow louder as Nov. 17 quickly approaches.