While a quaking American media blathers obsessively about being on the front lines of bioterrorism, a Pakistani newsroom goes calmly about its business after its own spore scare. 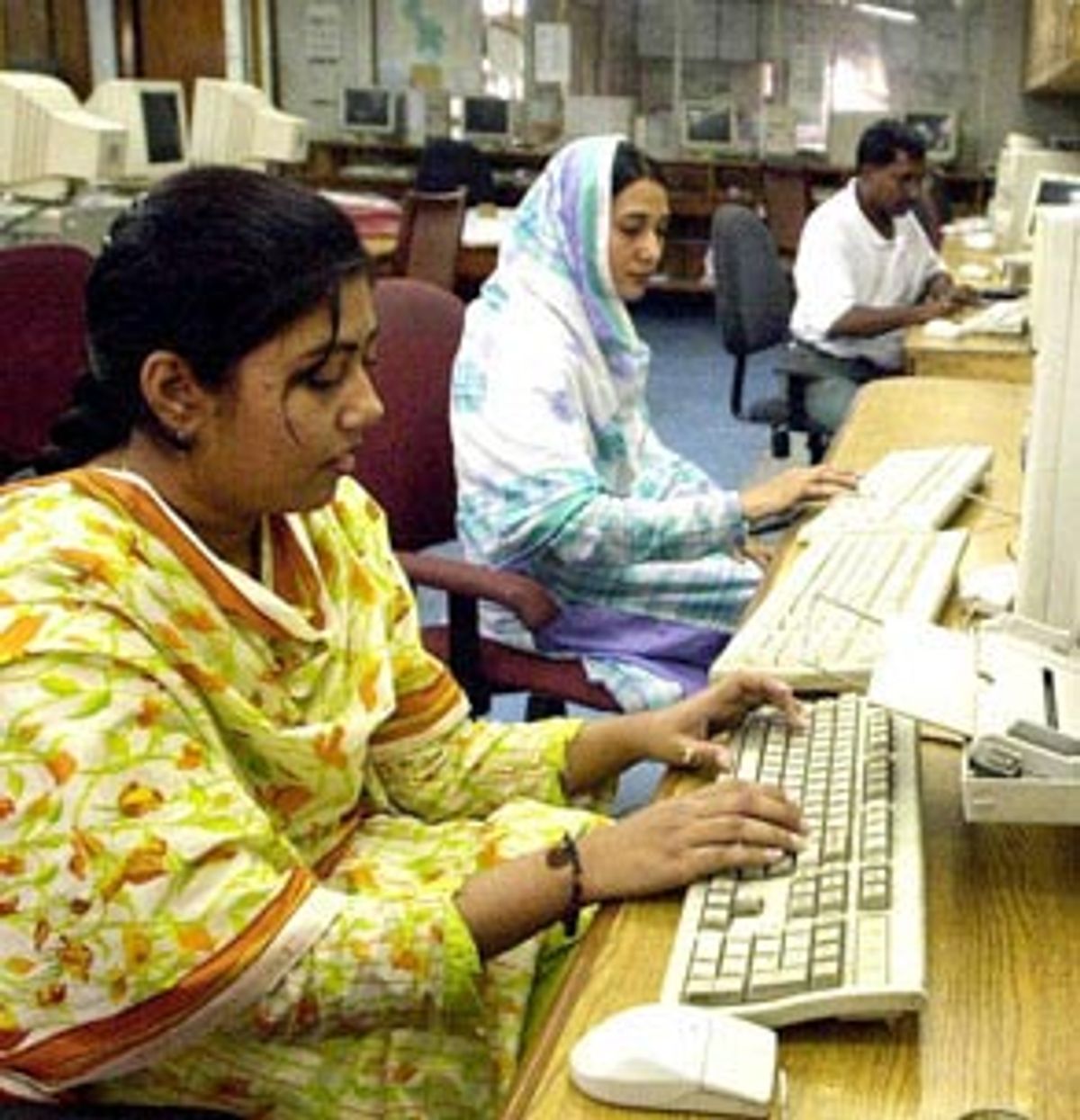 During his radio address over the weekend, President Bush urged the American public to remain calm in the face of current anthrax attacks.

For a lesson in calm, I met four uniformed sixth grade girls from Miss Saeeda's class, 6A, at Karachi Public School. It's Saturday afternoon, and they're standing outside the school library, where Shakespeare's "Romeo and Juliet" sits on the shelves. News broke here about the first discovery of an anthrax-laced letter delivered outside America, and it was delivered just down the road from these children's school to the office of the country's leading Urdu newspaper, the Daily Jang.

Is all this talk about anthrax frightening these young girls?

Why not? Quratul-Ain, in the spirit of her famous namesake (eclectic, cutting-edge Urdu novelist Qurratulain Hyder), explains from behind her spectacles: "Our God is with us." Of course, she believes that's the same God who happens to be watching over America. But Pakistanis, from elementary school-aged children to the reporters in the Daily Jang office, are taking the news of this scare with a calm that doesn't seem to be the case in America -- partly, they say, because this is a society that is unprotected by EPA clean-air regulations, Transportation Department air bag rules or Agriculture Department poultry farm requirements. They're not used to having their health monitored and protected.

It's a reaction that's maybe a bit macabre considering the four deaths linked to anthrax in the United States. But to understand it in this Muslim society is to understand that the Quran spells out that death is predestined, so to fear it is essentially pointless. "Every soul shall have a taste of death," says sur'ah Ali Imran. It's a mantra I've heard much as a child of Islam. Our deaths are written before we are born. Live wisely, but fear not that which is an inevitable consequence of birth.

Back on Oct. 23, one of the commerce desk reporters here for the Daily Jang opened an envelope that spilled out white powder. Last Friday, the contents were announced to contain anthrax spores, according to tests at the very posh Aga Khan University Hospital, a Western-style campus that could have been dropped here from Southern California (students shouting to each other, "Yo! Where ya been?").

Now, on Sunday night, in the midst of this anthrax scare, I go to see how the newsroom is reacting. The office is down a narrow lane usually crowded with reporters' motorcycles and scooters. A rusty beat-up vehicle, a cross between a van and truck, sits outside with "PRESS" emblazoned on its front. On the way over, my dapper driver Gul Hussain shrugs off the anthrax scare. "The people of America fear death," he says in Urdu. "The people of Pakistan do not fear death."

Indeed, this is a place where the face of death and despair stares at you during even a simple drive, in the sunken faces of beggars who knock their knuckles on your window at intersections, the child who tries to sell you cummerbunds (the white cotton cords tied to keep shalwars up) for five rupees outside the Taj Medical Complex, the men piled without helmets on motorcycles, the teetering buses barreling by, threatening to tumble upon you.

A gentle-looking, middle-aged, uniformed guard sits on a stool inside a grilled gate pulled shut except for a narrow passageway. I slip up the stairs at the end of the lobby as if I belong there, without pausing at the guard desk. Nobody stops me. Nobody asks to check my little Samsonite Royal Traveler purse.

During a visit earlier in the week, there was a "PUSH" sign at the front door that somebody had altered to read "BUSH." CNN played on the Sony TV in the Karachi editor Mahmood Shaam's office. The air conditioner blasted away. Now, the PUSH/BUSH sign has been taken down. Highlights from Pakistan's cricket match against Sri Lanka fill the TV screen in Shaam's office (the World Series has no audience here). On his Philips computer screen, Shaam has the wire story about arrests in the anthrax mailing to his office. With his salt-and-pepper beard and spectacles, he is as good-humored and philosophical as he was almost a week earlier.

"We are not scared," he says, laughing lightly. "We enjoy these things. They're excitement for us. We know it's part of our life in Third World countries."

Ever since a Muslim, Mir Khalil-ur-Rehman, started the newspaper in New Delhi under British colonial rule during World War II (thus the name "Jang," which means "war"), Daily Jang reporters have survived imprisonment, kidnapping threats and raids on their offices by disgruntled political parties (thus, the numerous metal grill gates outside the offices). Shaam spent two months in prison during the military dictatorship of General Zia ul-Haq, bunking in a cell with criminals his newspaper had helped send to jail (they were forgiving, he says). The jailing of journalists here is so commonplace an occurrence that it's hardly a badge of honor.

A Boston Globe reporter calls from Islamabad. Shaam cradles the phone to his ear. "Hello? Yes?" He answers her questions with a trademark chuckle here and there. He asks her a question with another chuckle: "How are you finding time" to care about this anthrax scare "when your defense minister" -- Secretary of Defense Donald Rumsfeld -- "is in Islamabad?"

CNN, BBC, the Associated Press, Reuters all call Shaam. There is little news, though the police have arrested two suspects. In the newsroom, a man with a Sindhi topi (hat) fiddles with his moustache; another man sips a cup of tea; another flicks his cigarette on the blue tiled floor.

"Europeans, Americans have protected lives," says Shaam. "We think environmental protection is a luxury. We have bigger problems."

No one has yet tested positive for anthrax exposure, Shaam says. The offices were closed for one day to be decontaminated. Everyone in the office has been offered Cipro; some have taken it, others have not.

Education and health reporter Arif Ishaq, a senior journalist here, slips into a black chair with the factory plastic still covering it. "I can't say why Americans are so afraid. We are not. There are so many problems we are facing. Social, health, economic," he says. "This is nothing." Garbage here is dumped on the side of roads, not tossed into Hefty garbage bags that are then stuffed into neat garbage cans. Recycling? Ha.

So the reporters relish taking a brave pose.

"Civil society has not developed that much here," says Shaam. "The water we drink, if it is drunk by an American, they will get sick. When there is a sun eclipse, a moon eclipse, people here run to the roofs to see it. You protect your eyes. When there is a cyclone here, people rush to the ocean." In America, by contrast, we've got beeps interrupting TV broadcasts for warnings about hurricanes like Michelle, now raging in the Caribbean.

Haroon Leghari, director of Jang's London operations, draws on a Swiss Villiger No. 7 cigar. "If anthrax germs were exposed to the germs around us," he says, "they'd run for their lives. They'd come out and they'd say, 'This ain't New York!'"

Around the office, they joke about getting anthraxed. "Have you been anthraxed?" laughs Faisal Jamal Ayoob, group director of productions, who works next door to the "anthrax zone" -- the area possibly exposed to the contents of the spilled envelope.

In this parlance, I get anthraxed. I sit in a dingy chair at the commerce desk where the reporter opened the letter. The chair wobbles on its wheels. An "Urdu Keyboard Layout" is taped to the CPU sitting on the top ledge of this long, two-tiered desk. The desk is empty right now, but not from fear. The reporters just aren't around. A plastic trashcan (without a liner) is filled nearby with red betel nut juice from the men here who chew it and spit it out like chewing tobacco.

Abrar Bahtir, news editor, sits a few desks away. He just got the photo captions for Monday's paper, a photo of a banner from a World Trade Organization protest on his computer screen ("Make World Trade Work for the WHOLE WORLD"). He is on Cipro, but he isn't worried about this disease that is said to come from animals, even if the anthrax is now produced in laboratories. "Pakistan may jahnwar kay sath zindaghee guzarthahay." In Pakistan, we spend our lives living beside animals.

It's true. On Ma Jinnah Road here in Karachi -- just like on nearly every other road in Pakistan, including the motorways (as highways are called) -- donkeys and horses leading wagons gallop beside auto rickshaws and yellow taxis with rusty doors.

My phuppa (the husband of my father's sister), M. Qamaruzzahaman Khan, a homeopathic doctor now retired from a bank, flips through a homeopathic manual and stops at "Anthracinum," a homeopathic drug used to fight anthrax. He hasn't had any customers lining up outside his door. Americans are "nazook," he says. That means weak. He doesn't mean to be insulting; it's just that this is a culture without free-flowing pasteurized milk or filtered water -- the best most people do is boil their milk and water on stoves.

Look, he admits, he was impressed with the toilet seat liners he remembers from the Greyhound bus station in Chicago. But that's a thing of fantasy in this country, where folks cover their faces, Taliban woman-style, just to protect themselves from the clouds of diesel fumes that follow beat-up motorcycles. "Americans are over-spoiled. Pakistanis are under-spoiled," says Qamaruzzahaman Phuppa.

And as a result, the deadly anthrax spore, regardless of its potency, has yet to rattle Pakistan, and has created an even greater cultural distance here when the public watches reports of the anxiety seeming to take hold of America.

One of my cousins watches a BBC profile of a U.S. postman fearful of getting anthrax. But the postman's dangerous working conditions don't catch his attention. Instead, he is impressed by the fancy dining-room table the postman and his family sit around for the interview.

"Look at how well postmen live in America!" he yells to his wife.