Bin Laden so long it looks like up to me

Exclusive! For men only! A diabolical coded message from the world's archvillain revealed for the first time anywhere! 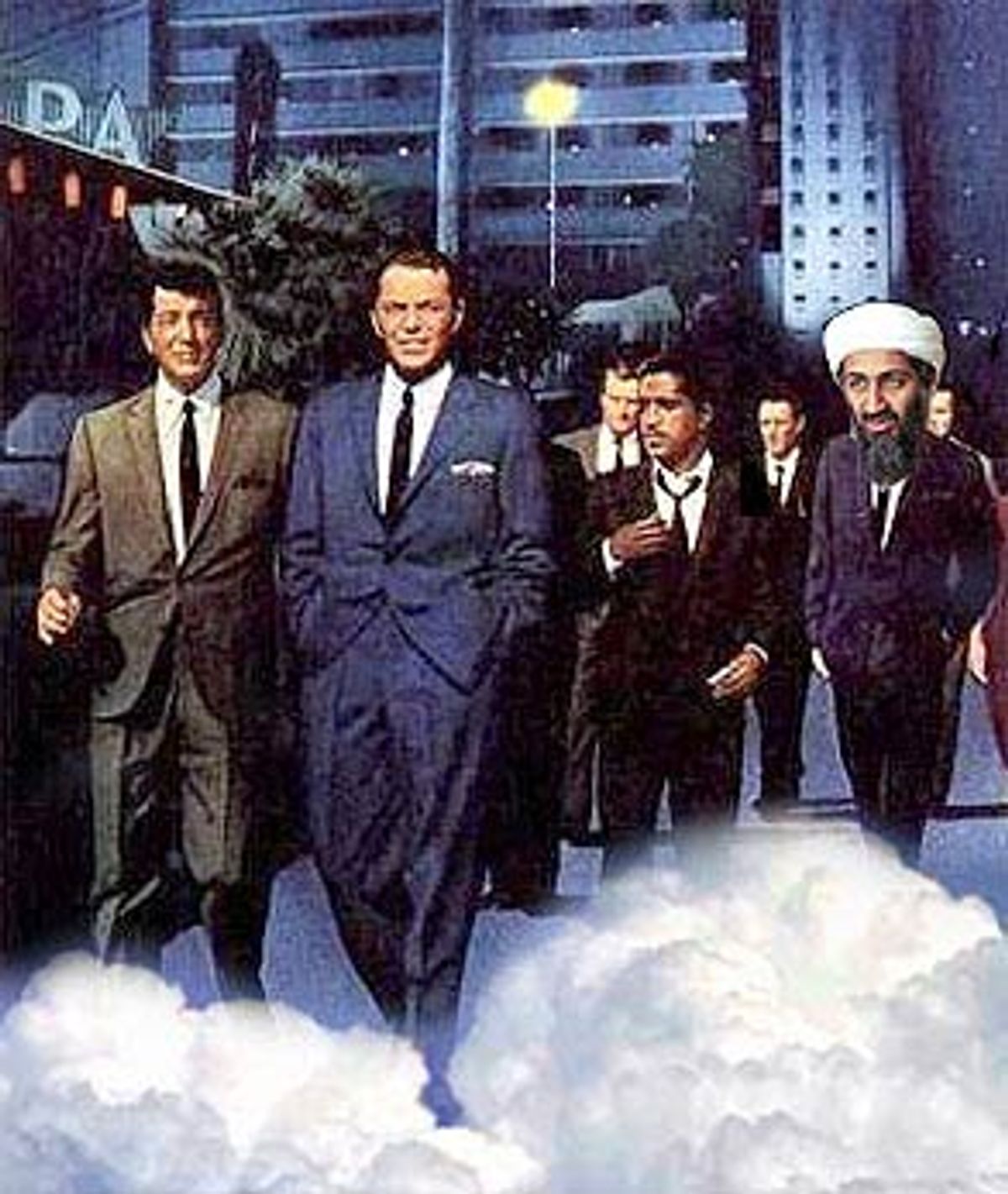 In a speech broadcast on Qatar's Al-Jazeera television, his third such telecast, bin Laden lambasted the United Nations as "an instrument of crime," and its members as "hypocrites." He also called Arab leaders who support the U.N. "infidels" and the West's war effort in Afghanistan "ferocious and unfair."

American response to the speech was relatively muted. But British authorities dismissed it as "contemptible" and a "desperate fantasy." CNN, which showed parts of bin Laden's last missive, refused to air the latest video.

There has been some concern, apparently, that the bin Laden tapes may contain hidden codes, instructions for terrorists, private messages or a combination thereof. Also, a spokesman for CNN (who asked not to be identified) feared that Americans might become "hippum-mo-tized" -- as he put it, making little quotation marks in the air with his fingers -- by the charismatic zealot.

Is bin Laden hiding coded messages in these telecasts? Are they evidence of his growing isolation and desperation? Could they, in fact, be both?

Recently, an intuitive psychic (who asked not to be identified), trained in deciphering videotaped diatribes, played bin Laden's speech backward through a device of his own invention, which he calls the "Esperantizer."

This is the result, a transcript of what bin Laden may have really said. You be the judge:

"This is Osama bin Laden, speaking to you through my mind! Hi fellas! Any ladies in the room, put on the veil, and scoot. Because I can see through your clothes with my mind! Hijab got nothing on me, OK? Go on now. Go knit an afghan.

Cool. First off, don't be taken in by my stern visage. I'm cracking up here. Sometimes I have to hold my breath to keep from getting the giggles. It's like a ventriloquist with a dummy, you know? The dummy says the craziest shit, but the ventriloquist has to act like nothing is unusual. I really don't know how they keep from losing it. Or moving their lips. That shit is fucked up. We're all agreed on that. It's a symptom of Western decadence, along with show tunes and styling salons.

Second, wow, hats off to whoever dreamed up that whole anthrax thing. That's some evil shit, man. Big thumbs up, I mean it. The Americans are jumpy as a Jedi in a force disturbance.

Except hold the phone, time out -- we're the Jedi, OK? And we're not jumpy. We're, uh, we're long-suffering, devout and we got the sword of, you know, whatever.

It's like that last "Star Wars" movie. Stay with me on this. The Trade Federation is the U.N., and Darth Sirius is Bush, OK? And we're the Jedi, helping people out in the desert. We're not jumpy! That movie blew chunks anyway. America will pay for that.

Hey, did you check out my cam? It's the bomb. Compact, great color, and it can handle the elements. That's important. If you come on down to the caves, I'll put you on TV. Plus: Halvah and Perrier for everybody!

And let me hip you to this: Afghanistan has the best hashish in the world. Had a pipe before the broadcast myself; it's why I'm a little spacey. One more reason for you to join me here. Mr. Cat Stevens on the headphones. Nothing better.

We will prevail. We have the sword of, uh, you know. What do they have? Smart bombs and night goggles. Pathetic, man. So join us here in the caves this winter as we tear the infidels a new one. Gonna be hot.

If you can't make it over, that's cool. Hey, I got money! I'll give you some if you go to America and drive into a bridge or something. I hate bridges. We don't have bridges or postal employees or senators, why should they? You know?

So, yeah, the bridges. Get those out of there. And anchorwomen. Whatever. You can make your own list. Think it real hard, I'll pick up on it with my mind, send you a check. Wish I still had e-mail and my cell, but hey, don't blame me, blame America.

And listen, all that stuff about you going to heaven when you die a martyr's death? I wasn't shining you. That's all true, man. It's in the Quran, man. Virgins and disco balls, anything you want. Jordache jeans. Air hockey. I know many of you enjoy air hockey. Nothing wrong with that. A man's got to have his little pleasures, unless they're wrong.

Me, I picture heaven looking a lot like Las Vegas, not the new Vegas, with the kiddie rides, but the Rat Pack Vegas. Now that was desert living. I'd love to see Dino and Sammy and Frankie and that English twit do their thing. At the Sands. I would definitely check that out. And then I would blow the fucker up.

That shit is really fucked up, man. Next thing you're gonna tell me is they're gonna do a remake of "Ocean's 11."

Did you hear that? Like thunder? They're just doing this to mess with me. Damn Trade Federation. Gotta split, my brethren. Keep the jihad flying, and I'll see you on the Strip! Later!

Merle Kessler is a scriptwriter, lyricist and humorist. Some may be more familiar with him through his bitter alter ego, Ian Shoales. He lives in San Francisco.