The hills are alive with the sound of ... vampire slaying!

An extraordinary episode of "Buffy" takes the American movie musical to places it's never been before. 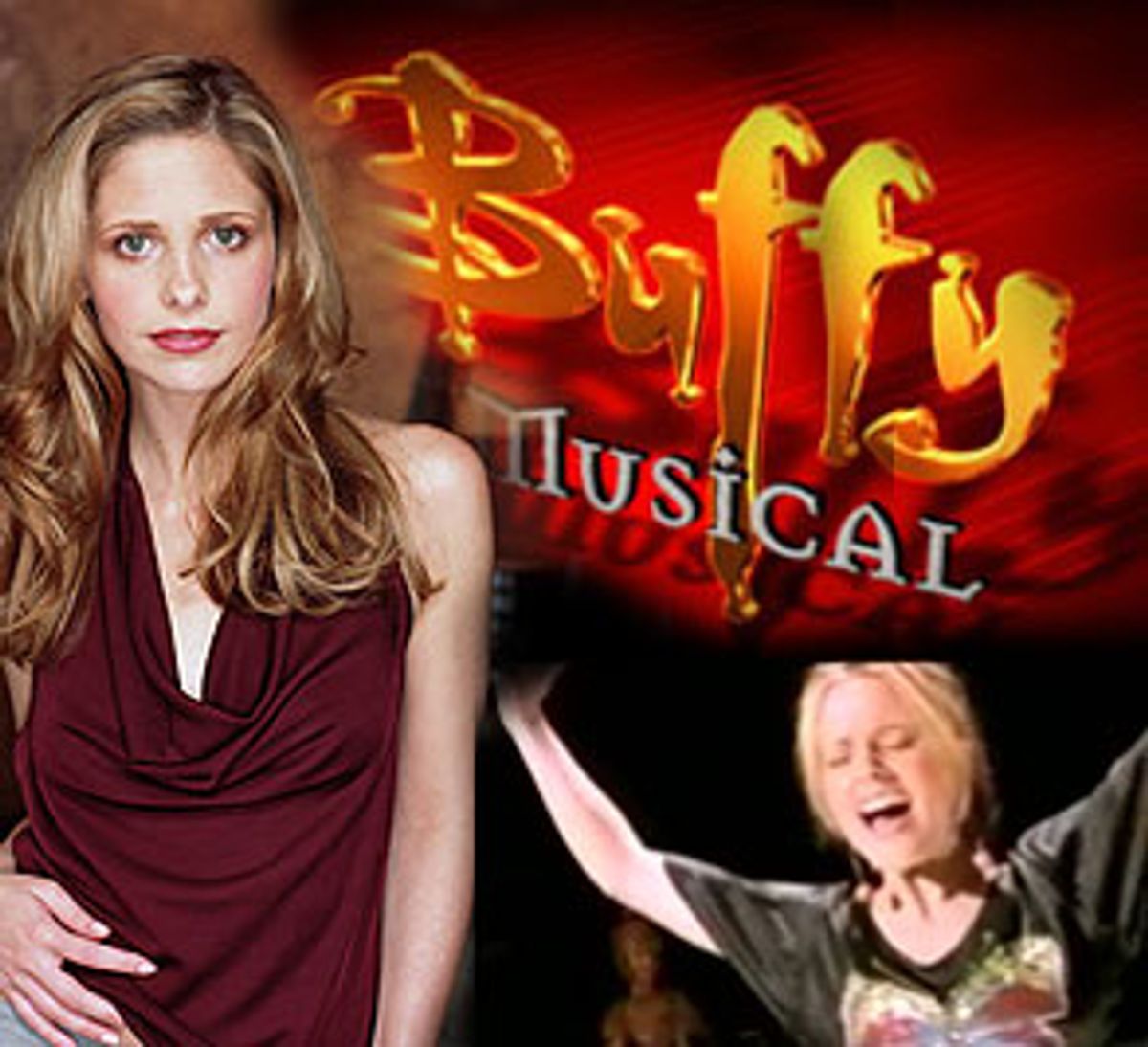 Even those of us who love musicals have to recognize that they often demand taking a leap of faith: Sometimes when a segue from dialogue to song doesn't feel natural or believable, we look the other way for an instant until we can get swept back into the rhythm of the music and the action. And then there's the problem of hokey expository dialogue clumped around the music. Pauline Kael nailed it in her review of the film version of Stephen Sondheim's "A Little Night Music": "You know what you're in for near the beginning when the hero ... is greeted with 'Good afternoon, Lawyer Egerman.'"

How can it be, then, that a special musical episode of "Buffy the Vampire Slayer" -- an episode that ran some eight minutes over the show's regular runtime, potentially causing riots across the land among fans who didn't set their VCRs to catch the overhang -- should avoid every traditional pratfall of the genre? The show's creator, producer and chief writer, Joss Whedon, wrote and produced the music. The songs were only half-memorable at best, and the singing ability of the show's regular cast ranged only from the fairly good to the not so great.

But picking apart the technicalities of this "Buffy" episode -- its title was "Once More, With Feeling" -- is the best way to miss the point of how beautifully it worked, how gracefully paced, clever and affecting it was. For one thing, Whedon figured out how to make the music a seamless part of the action, by working it into the plot as a joke.

Here's the story: Sunnydale has been invaded by a demon who makes everyone burst into song and dance at the slightest provocation, as Buffy discovers when she looks outside on a sunny morning and sees a phalanx of ordinary citizens prancing and high-kicking in perfect formation, swirling their just-retrieved dry-cleaning about them like bullfighters' capes. ("They got the mustard out!" a chubby, gleeful baritone sings by way of explanation.)

The joke is brilliant because it frees even people who hate musicals to settle into the story without getting hung up on the genre's conventions. I remember a friend saying to me in the fourth grade, "Musicals are so unrealistic! Nobody bursts into song like that!" Whedon addresses that criticism directly instead of just dismissing it.

But "Once More with Feeling" works mostly because the musical numbers are keyed right into the heartbeat of the show, a show whose mythology, by now, in the midst of the sixth season, is so rich and deliciously Byzantine that you could almost design a college course around it. There was joy and lightness in "Once More with Feeling," particularly the sequence where Tara (Amber Benson) and Willow (Alyson Hannigan), the show's Wiccan lesbian lovers, cavort in an almost insanely sunny park, twirling about in medieval-looking frocks. Tara sings of her love for Willow, particularly her amazement that anyone could open her so completely to the beauty of the world; the scene ends in the couple's bedroom, with Tara gently levitating inches above the bed as Willow hovers somewhere just below the frame, one of the best metaphors for the bliss of oral sex I've seen on any screen, small or large.

Yet the whole of "Once More, With Feeling" was brushed with melancholy -- of the four humors, that's the one Whedon finds the most interesting and worthy, and it's the thing that's given the series so much juice and depth over the years. The presence of the musical demon dude (a sharp-suited smoothie in two-tone shoes, a dashingly handsome figure if you discount his shiny red devil face) causes the characters to spill their deepest secrets in song. So we get Xander (Nicholas Brendon) and his ex-demon fiancée Anya (Emma Caulfield) leaping out of bed (dressed in '30s-style satin nightclothes) to sing blissfully not just about how deeply in love they are, but about all the petty things that they find annoying about each other. Is this the beginning of trouble in paradise?

From there, the characters' intertwining troubles and fears only intensify. Giles (Anthony Stewart Head) sings a tender lament to Buffy (Sarah Michelle Gellar), wondering if he's not doing her more harm than good by staying in Sunnydale, now that she's returned from the dead to face a new set of challenges (the biggest of which is simply being an adult). And Tara is jolted out of her reverie when she learns that Willow, well-intentioned but misguided, recently worked a spell on her to control her thoughts; she wonders aloud if she might have to leave the love of her life behind, and her suffering comes through in the pale, watery clarity of Benson's voice. Tara and Giles, each tangled up in their own troubles, sing a contrapuntal duet -- they're complementary mirror images of each other, both knowing that doing what's "right" may end up being the hardest task they'll ever have to face.

If that's not operatic intensity, I don't know what is. It's fitting that this spectacular episode should follow right on the heels of this year's twice-postponed Emmy Awards show: "Buffy" has been nominated several times over the years (mostly for minor honors like cinematography and hairstyling), but has never won a major Emmy. I've enjoyed some of the work of David E. Kelley and Aaron Sorkin, though they're not half as clever as they think they are: Too often their self-consciousness shows right through like the gleam of skin beneath the knees of a threadbare pair of pants. As a writer and producer Whedon never comes off as self-conscious, no matter how fantastical his story lines get, because he rides his instincts for both high drama and humor like the Big Kahuna. Unlike "The Practice" or "The West Wing," "Buffy the Vampire Slayer" isn't a show made by a guy who's working overtime to show us how much drama there is in the prosaic; it's made by a guy who understands that when you're living high drama, you long for the prosaic. What Buffy Sommers wouldn't give to be a presidential aide or a lawyer arguing a malpractice case! Instead, in a setup that's formally classical despite the fact that the characters wear the latest fashions and live in Southern California, she's destined to slay demons and vampires for the rest of her days -- and possibly beyond.

"Once More, With Feeling" works beautifully in the arc of the Buffy mythology, and it points the way to intriguing, possibly distressing, developments for the rest of the season: Buffy's younger sister Dawn (Michelle Trachtenberg) is starting to feel rumblings of a sexual restlessness that can only lead to trouble. (The musical demon almost lured her back to the underworld with him -- just as, a few weeks back, she almost surrendered willingly to a vampire's kiss.) And the sparks between Buffy and Spike (James Marsters) just may ignite an explosion. In "Once More, With Feeling," Spike -- one of the most seductive figures Whedon has created, a character whose Brit blond laddishness is more debonair and silky than thuggish -- finally comes to terms with his unquenchable love for Buffy. As a vampire who's been "tamed" against his will via an implanted microchip, he used to be her mortal enemy; now he's simply besotted with her.

Buffy, still only half-awake in the land of the living (returning from the dead is never easy), is more vulnerable than ever to his charms. And he, unlike her mortal friends, understands completely why mortality is hell. And there's no way of getting around the obvious: He's frigging handsome.

"If my heart could beat/ It would break my chest," he blurts out in his anguished sung confession. A vampire in love is a terrible and beautiful thing, but a singing one is off the charts. "Once More, With Feeling" was just a little more than an hour's worth of television, but its gently layered tones suggest something infinitely more complicated than either your standard contemporary musical or your standard contemporary TV episode. It's an all-singing, all-dancing full-moon fever dream. Now that's entertainment.