Why do you think they called them "best boys"?

A new book names names and tells tales as it charts the lasting influence of gays and lesbians on the movie business. 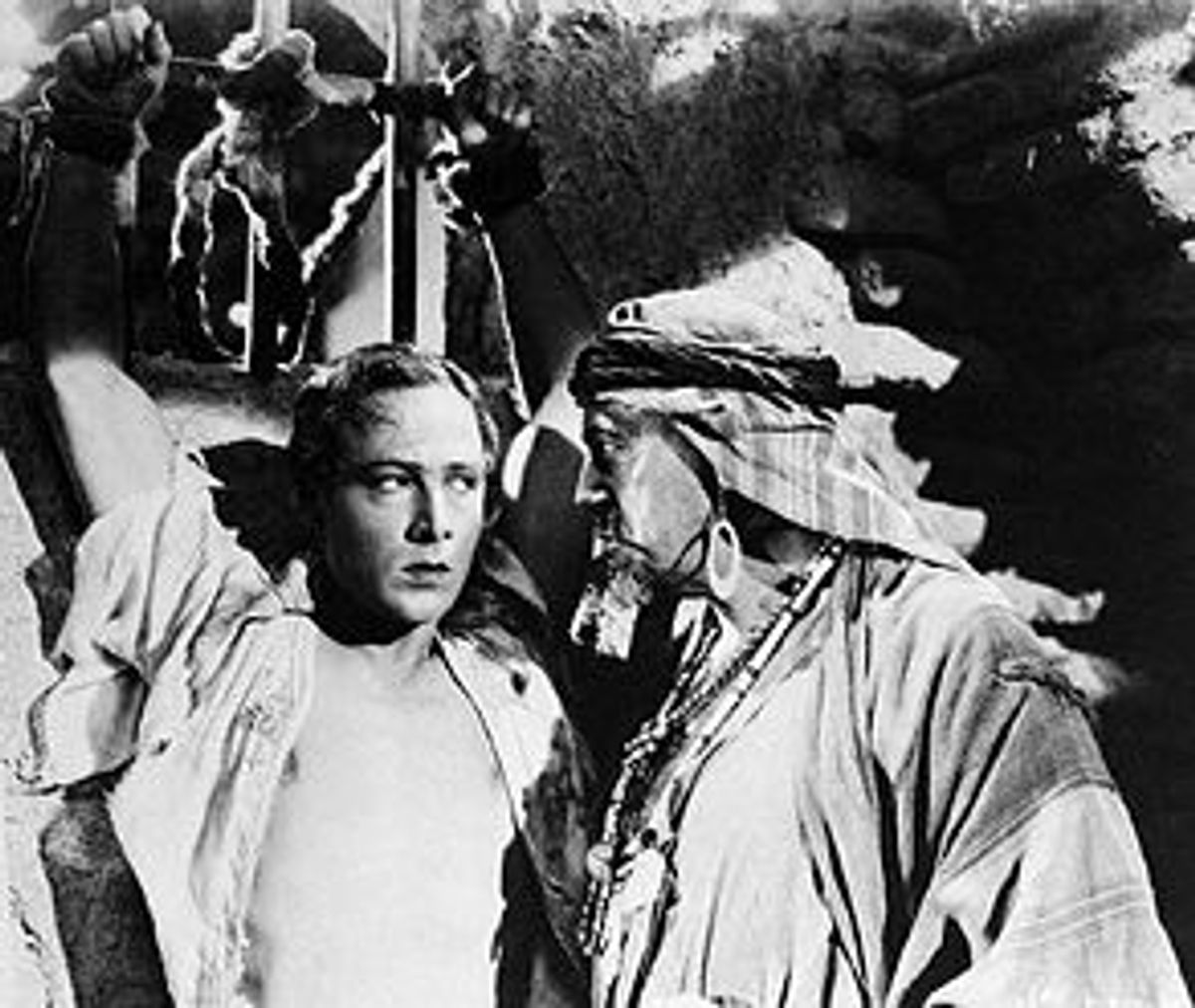 "Behind the Screen: How Gays and Lesbians Shaped Hollywood 1910-1969," William J. Mann's meticulous sociocultural archeology, unearths the impact of gay, lesbian and bisexual film industry workers on American motion pictures -- not to mention their impact on the country's sense of style, glamour and fun. There's nothing revelatory in Mann's book, unless you've been leading a very cloistered life. ("Raymond Burr?") But it's exhaustively researched, well written and filled with entertaining anecdotes, interviews and odd historical details.

Mann rounds up both the usual and unusual suspects. Among the famous are Cary Grant, Greta Garbo, Claudette Colbert, Gary Cooper, Cesar Romero, Tallulah Bankhead, Montgomery Clift, Edward Everett Horton, Cole Porter, Liberace, Burr, Clifton Webb, Sal Mineo, Ramon Navarro, Roddy McDowall and Rudolf Valentino, the David Bowie of his day. But "Hollywood Babylon" it isn't. True to its title, the book focuses more on the people behind the scenes -- from set decorators and costume designers to choreographers, writers and producers -- than on the stars, though Mann provides plenty of tasty morsels about actors and actresses, as well as directors, such as Vincente Minnelli, George Cukor, Dorothy Arzner, William Desmond Taylor and Edmund Goulding.

Here, describing the emergence of Marlene Dietrich, Mann writes, "At the German premiere of 'Der Blaue Engel,' the film that catapulted her to international stardom in 1930, she walked out onto the stage with a bunch of violets pinned to the crotch of her gown. Violets, the symbol of lesbianism -- sure to be understood by an audience of her friends in Berlin."

Later he tells of Ronald Reagan's discomfort when "Dark Victory" director Goulding, who was homosexual, suggested that the future commander-in-chief give a gay spin to his role in the film. "Mr. Goulding wanted me to play my character as if he were the kind of guy who wouldn't care if a young lady were undressing in front of him," Reagan complained.

Elsewhere in the book Mann reports:


Sometimes Goulding would actually play the scene himself first, costumes and all: "The sight of him tripping into a room with a frilly party frock lashed to his middle is said to be something that verges on the terrific," said one reporter.

The movie industry, almost from its inception, attracted individuals for whom "normal" life just didn't seem that appealing, or even attainable. They've frequently been, and continue to be, people -- "show people" -- who, by the very nature of their outsider character and outsize personalities, are more prone to experiment, to pursue the unconventional. Sometimes that was reflected in their sexual orientation, sometimes it wasn't. "The divide in Hollywood was never a simple break between gay and straight," Mann writes; "it was always more between progressive and repressive, imaginative and conventional ... a 'gay sensibility' or 'alternative worldview' wasn't always the sole product of homosexuals."

"If you view Hollywood as a colony of immigrants," critic and historian Michael Bronski tells Mann, "there is a way of seeing [gay filmmakers] from an immigrant experience, even if they were born in America. Remember, Hollywood was made up of people who were considered 'outside' of what a real American citizen was supposed to be. They were Jews, they were homosexuals, they were independent women, they were actual immigrants. So in many ways, all of Hollywood was familiar with having to 'pass.'"

But what Hollywood became, at least for a time, Mann says, was a kingdom -- or queendom -- where passing wasn't necessary. It was made up of duchies (certain studio departments) in which homosexuality was the norm. Talent was the currency, and if you had it, you could buy the tolerance of even the town's most rabid homophobes, like MGM chief Louis B. Mayer.

By the 1920s, homosexuals -- especially in departments such as makeup, set decoration and wardrobe -- were not only acknowledged, they were welcomed by the studio heads. In 1925, MGM hired Russian designer Ert&#233, and his partner, Nicholas Ouroussoff, picking up the expenses for both; Mayer, "whose antipathy to homosexuals was well known," even invited them to his home for dinner. Ert&#233 insisted that his relationship with Mayer was always a pleasant one, and Mayer, according to Mann, seemed authentically regretful when Ert&#233 left MGM. "For gays in the studio wardrobe departments, there existed an extraordinary environment of freedom and tolerance, found virtually nowhere else in American industry." It wasn't merely tolerated, Mann says: "Being gay actually carried with it some cachet."

Yet as early as 1923, journalist Herbert Howe, who was gay himself and romantically involved at the time with Mexican film idol Ramon Novarro, sounded a cheeky, albeit prophetic, warning in a Photoplay article when he commented on the effeminacy of the movie heroes of the time:

From the moment Valentino hoofed that tango in "The Four Horsemen of the Apocalypse" and set the flappers cuckooing, the movie boys haven't been the same. They're all racing around wearing spit curls, bobbed hair and silk panties ... There seems to be no end to gallantry these days -- gallantry, hair and ruffles. Ramon Novarro, who wore less than Gunga Din but with more chic in "Where the Pavement Ends," is Scaramouching around Hollywood dressed up like Caesar's pet horse. This can't keep up. The public can stand just so many ruffles and no more. Some of the boys had better walk up one flight and get some blue serge nifties. It's a cinch if they don't change their panties some of the producers are going to lose theirs.

Sure enough, by 1926 Hollywood began to bite back. Shortly before Valentino's death that year, the Chicago Tribune was calling the unprecedentedly popular heartthrob a "pink powder puff," asking, "When will we be rid of these effeminate youths, pomaded, powdered, bejeweled and bedizened in the image of Rudy -- that painted pansy?" A few years later, a Fox executive would write to his boss, "I think the quicker we get away from degenerates and fairies in our stories, the better off we are going to be. I do not want any of them in Fox pictures." And Variety described Production Code czar Will Hays' tenets of movie morality as a campaign to "keep the dual-sex boys and lesbos out of films."

By the 1950s, spurred by the motion picture strikes of 1945 (which had roots in a campaign for increased wages by the set decorators) and the House Un-American Activities Committee witch hunts, the industry had taken a harshly intolerant turn. "For many," Mann writes, "sexual perversion and political subversion became interchangeable. The Right linked homosexuality with sedition, equating it with moral weakness and conflating it with Communism ... The industry saw the decorators as both gay and Communists; ergo gays were Communists."

And yet Don Bachardy, the longtime partner of Christopher Isherwood, told Mann, "I can't think of any homosexual who was involved in the Red Scare. Queerness and communism seemed instinctively incompatible. There was a squareness to communism, many [gays] thought. It lacked color and excitement and fun." Those drab clothes!

In any case, what had been anticipated by Photoplay writer Howe in the '20s came to pass -- in spades -- in the following decades, reaching its zenith in the claustrophobic '50s. "It's a fascinating irony," Mann writes, "that ... the three most enduring iconographic stars of this most repressive of times were, in fact, sexually deviant: [James] Dean; [Marlon] Brando, who'd acknowledge his own sexual experiences with men; and [Rock] Hudson. Their onscreen alchemy is infused with such deviance."

Not surprisingly, Mann's book is most fun to read in the chapters about Hollywood at its most fun -- the first three to four decades of the 20th century, what George Cukor called the town's "la belle epoque."

In 1916, the hottest male movie idol was the now forgotten J. Warren Kerrigan, who lived with his mother in "The Kumfy Kerrigan Kottage" and once told the Motion Picture Blue Book that he loved the ladies "when they leave me alone." Another gay star was Gareth Hughes, who had the lead in Fox's "Every Mother's Son" in 1918. Mann describes him as a "flaming little queen." By the mid-1920s his film career was more or less over, but Hughes lived out his days productively as a member of an Episcopal monastery who worked with Paiute Indians in Nevada. The indelible Edward Everett Horton, Ramon Novarro and Harrison Ford (as Mann prudently points out, no relation to today's macho helicopter jockey) were among the other gays who became stars during the 20th century's first two decades. "Behind the Screen" tells of Ford going on a costume-buying spree for actress Norma Talmadge and being "as enthusiastic as a young debutante planning her first party dress." Mann isn't stingy with an almost endless string of colorful anecdotes.

On a few occasions in "Behind the Screen," Mann tries too hard, stretches a little too far, to make his case. He includes the text of several telegrams, for example, between actors Andy Lawler and Gary Cooper. Mann describes the messages as "enigmatic" -- they will strike others as entirely innocuous. All he can say for sure is the obvious -- that Lawler and Cooper were good friends, and that Cooper had an androgynous quality that may have added to his appeal. These speculative digressions are doubly unnecessary because he's got mounds of well-documented, verified accounts.

Also, for a book that's clearly the result of a massive and methodical research effort, some omissions are peculiar. Mann refers to film historian Kevin Brownlow's "landmark study of the silent era," but doesn't bother to mention in the main text the title of Brownlow's wonderful "The Parade's Gone By" (the 1968 book he's presumably referring to) or his equally fine "Hollywood: The Pioneers," published in 1979. Likewise, Mann goes into considerable detail about the mysterious 1922 murder of gay director William Desmond Taylor, but never mentions "A Cast of Killers," the bestselling 1987 book on the subject by Sydney Kirkpatrick, based on the research of film director King Vidor, which many believe solves the case.

But that's nitpicking. For those fascinated by film history, gay and lesbian history, or both, "Behind the Screen" is the book of the moment and a treat to read.