Romance and other myths

Kelly Link, author of "Stranger Things Happen," talks about the inspiration for her unsettling tales. 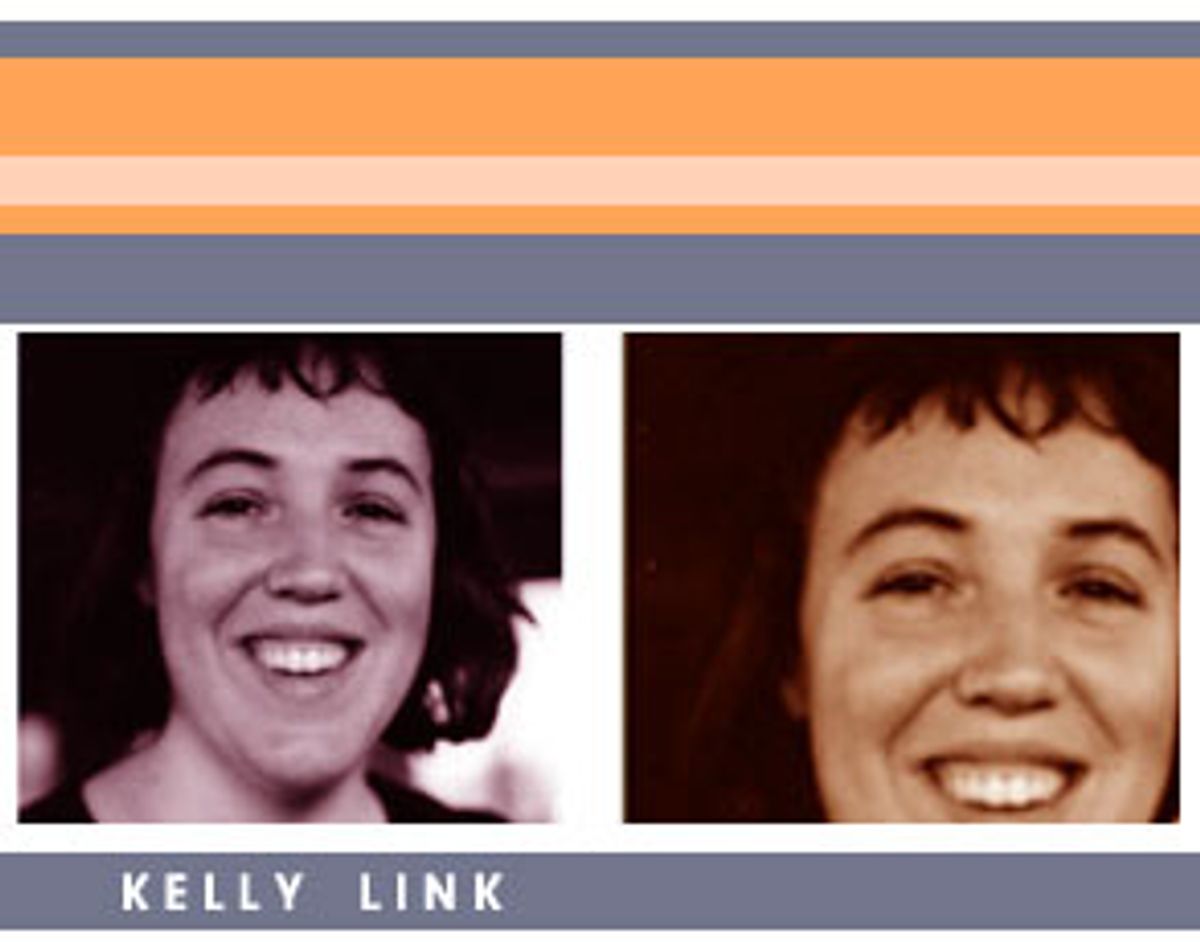 Despite the "stranger things" that happen in her stories, Kelly Link maintains that uncanny events don't take place in her real life. (Well, maybe once -- see below.) The 32-year-old daughter of a pastor turned psychologist, Link has lived in an assortment of American cities -- Philadelphia, Miami, Boston, Greensboro, N.C. -- moving every five years or so, settling for the moment in Brooklyn, N.Y. Books have been a constant in her peripatetic life, from studying literature to working in bookstores and for publishers and, of course, writing. Link dropped by Salon's New York offices to talk about "Stranger Things Happen," her new story collection, the imperfection of romance and the reason why so many stories feature absent mothers.

One striking thing about your stories is their powerful atmosphere. In "The Specialist's Hat," for example, it's not always crystal clear what's going on, but there are a lot of intimations, and the intimations are all pretty disturbing. I'm wondering if when you write a story like that, in which the reader doesn't quite know what's happening, is there a lot that you, the writer, know but that you're not telling us? Or do you prefer to not even know yourself?

I think both. With a story like that, or with the story "The Girl Detective," I'll start out thinking, "I'll write a ghost story" or "I'll write a detective story." Then I'll begin and think, "I can't do this. I can't put this together." So I'll write around the ghost story, vaguely sort of a ghost story, but not really. I'll know when it's not the story that I meant to write, but if people ask me questions, like, "What exactly happened here?" my brain will shut down and I'll say, "I don't know!"

So if I asked you: What isthe specialist's hat ...?

Well, I can answer that. There's a museum called the Peabody Museum. I went there with my sister. There was a display case with a description for the hat, but there was no hat in it. It was empty. I thought that was wonderful.

So the story was inspired by a strange experience?

Yes, especially because I went back later to look for the display case, and I never found it again. Another writer, Shelley Jackson, who incidentally did the cover art for my book, read the story when it was published and said, "I saw that! I saw that in the museum!" But by that time she was living in California, and she couldn't really describe to me where in the museum she had seen it.

Do a lot of things like that happen to you?

Another writer I interviewed recently said that the reason his fiction is full of disturbing, dark things is because by temperament he's basically very contented and optimistic. I suppose it's lucky that you're like him in that way, because as a writer you specialize in creepy scenarios. What do you think that's about?

I don't know! I never even went to scary movies when I was little, but we did have baby sitters who'd describe to us the plot of "Halloween" and "The Exorcist." It was always related to us secondhand, and that might have something to do with the way I write.

Spooky movies are often spookier when someone else is describing the story and leaving a lot to your imagination.

I even prefer to have things like television sitcoms described to me. I had a friend who'd describe to me the plot of each episode of "Friends." I thought that was great. I didn't have to watch it, but in 10 minutes he could sum up everything for me. It was fascinating.

Did you feel that it was better in that form?

Yes. It's great when somebody tells you something like that because of the way it's filtered. They're telling the things about it that they thought were important, which is always kind of endearing.

Maybe that's one of the reasons you like fairy tales and myths, because that's how they got passed on, by generations of people telling what they thought was important about the stories.

Yeah. A lot of the details are just so strange. We all think of them as normal because we've heard them so many times, but if you start thinking about them, then they become much, much stranger.

In one of your stories, "Flying Lessons," which is set in England, you bring in some of those odd details from Greek myths, and you fuse them with the story of this modern girl and her equally odd romance with a boy. In fact, relationships are the focus of a lot of these stories. What inspired that fusion?

Part of it is that I'm fascinated with romance as a genre. If you sit down to write a romance novel, it's like a sonnet; all the rules are in place. It has to have this kind of ending. Depending on the type of romance, it has to have this kind of sex, but not before a certain point. Part of that story was that I was trying to figure out the structure of a romance story. And I was very interested in London subway names at the time, so that got in there, too. This was one of those stories where a lot of ideas got stuck together.

Romance is a big theme throughout these stories -- everything from the dead man writing letters to his wife but not being able to remember her name to the crabby young woman trying to find her boyfriend who was kidnapped by the Snow Queen. It's a very modern voice describing a very archetypal journey.

Romance is a genre I'm always thinking about. It's such a closed, imperfect form. It seems imperfect to me because the endings never seem real. It's just the point at which the book happens to stop. When you read a romance novel, and you're thinking seriously, you think, "Well, those people are not going to be happy together." And I would much rather write about that.

It's true that along with the fanciful things you write about, there's also this hardheaded realism, what you just voiced right there. There are imaginative elements, but then you get into what a young woman would really feel if her boyfriend disappeared one day with a woman in a goose-drawn sleigh and she had to traipse all over the world looking for him. By the time she finds him, she's so mad at him that she doesn't really want him back.

I like the idea of taking things that are alien and making them seem really very cozy and familiar. That's something that science fiction can do. It's the way that people can look at pictures of flying saucers and say that looks like a saucer, from under a teacup, something small and domestic. On the other hand, what I like about more realistic fiction, writers like Lorrie Moore, for example, is the way it looks at familiar things and makes them seem so strange. What I hope to do is to mix those up, so that you're constantly feeling comfortable and unsettled at the same time.

One of my favorite stories is "The Girl Detective." Anyone who's read a lot of Nancy Drew knows that there's always this nagging question: What happened to her mother? In your story, the girl detective -- who's never named, but we all know who she is -- goes to the underworld to find her mother. What inspired that? Nancy's missing mom?

In a lot of fiction, maybe because it makes the story more interesting, you get rid of a parent. You create an imbalance or a gap that has resonance all through the story. So we read a lot of stories like that and you start to think, well, that's not very fair to the mother. That was something that bothered me. And I had a couple of stories where something bad had happened to mothers. Reading more contemporary stuff, I started thinking about all the mothers who aren't in stories. The other place where something like that happens is in Greek mythology, where Ceres goes down to the land of the dead to find her daughter, Persephone. I wanted to reverse it.

You switched the relationship around?

Yes. I was just watching "O Brother, Where Art Thou?" which is based on "The Odyssey," and each time I see it, at the part where they're in the movie theater, I think that's really the underworld and it's a shade telling them, "Do not seek the treasure." I thought that was great. There's a whole tradition of writers who do this. Angela Carter is one, and there's a fabulous writer named Howard Waldrop who's mostly out of print now who likes to mix these things up, Buster Keaton and fairy tales and all kinds of things. He'll mix up [Christopher] Marlowe, the playwright, with Marlow from "Heart of Darkness." That always seems like a good starting place for a story to me, if you take themes, or two personalities that have something that relates, and begin to play around with that.