Does bin Laden have Marfan syndrome?

Is Osama suffering from a rare disease that can cause sudden death? 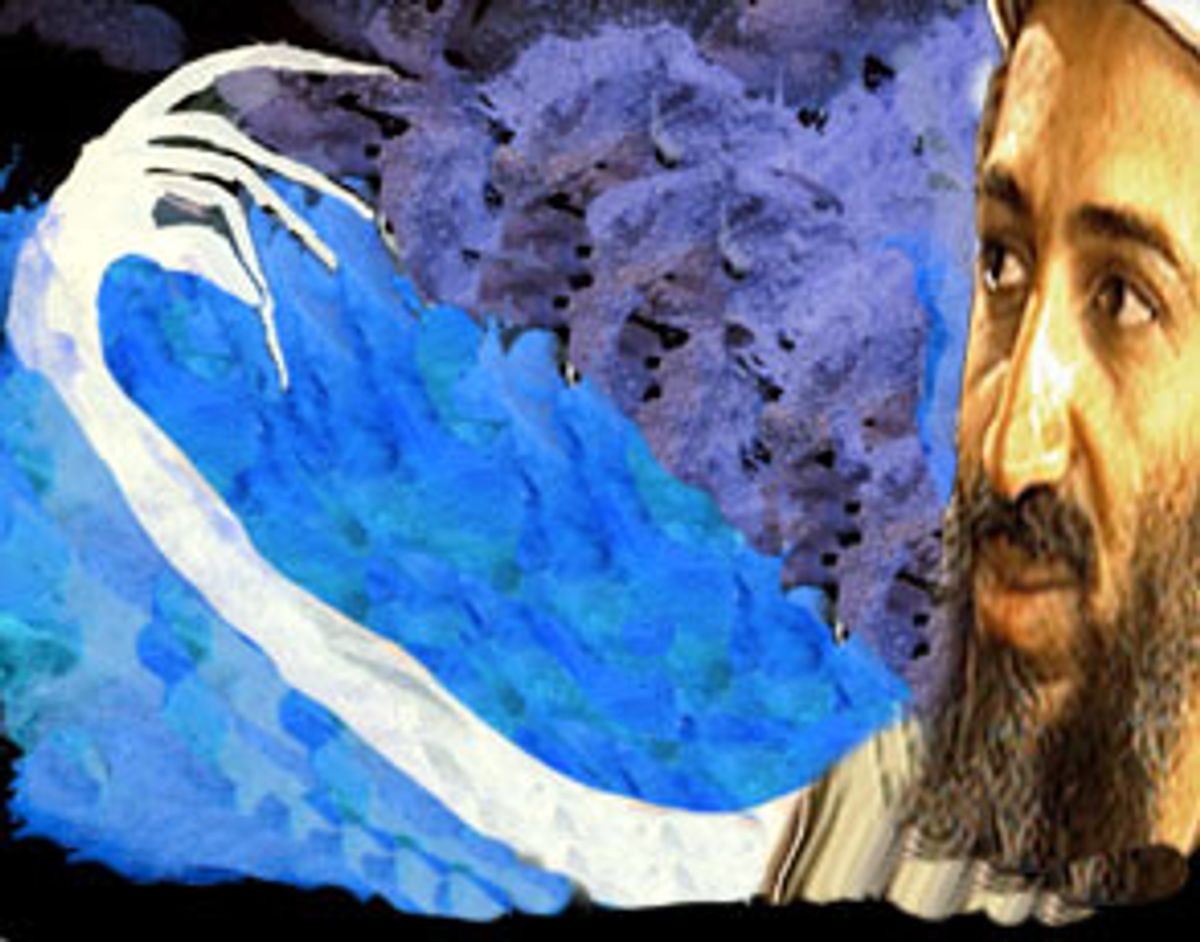 If what some medical experts say is true, it may not require a military strike to kill Osama bin Laden. For several years now, reports have been circulating that claim the 45-year-old is quite ill, sees doctors regularly and may have a heart problem. The evidence is sketchy, but some see signs that bin Laden could die suddenly.

Marfan syndrome is a potentially fatal disorder of connective tissue, and some believe it's jeopardizing the life of al-Qaida's elusive leader. Bin Laden would be in good company: Some say Marfan would have killed Abraham Lincoln if John Wilkes Booth had missed his mark in 1865. It also appears to have claimed the lives of Jonathan Larson, author of the musical "Rent," who died on the eve of the production's 1996 Broadway debut; Chris Patton, a University of Maryland basketball star who died during a pickup game; and Flo Hyman, an Olympic volleyball player who died at 31 in 1986. The aortas of all three ripped in a manner consistent with the disorder. Charles de Gaulle and composer Sergei Rachmaninoff are also believed to have had Marfan.

Although Marfan syndrome, like sickle cell anemia, is often the product of an inherited genetic mutation, determining whether someone has the disease is tricky. Experts say one in 10,000 people have it, but that thousands are unaware that they are affected. The National Marfan Foundation estimates that more than 200,000 people in the United States have Marfan syndrome or a related connective tissue disorder. "It's a very complicated diagnosis to establish," says Dr. Hal Dietz, a geneticist at Johns Hopkins University, who led the team that discovered the mutant gene responsible for Marfan. "There is no DNA test that can absolutely confirm whether someone has it."

Because there's no screening process or dead giveaway that a person has the disease, a Marfan diagnosis is an intricate process of elimination that almost always begins by sizing up someone's physical features. Marfan sufferers typically have an unusual outward appearance, often called Marfanoid. More often than not, the disease strikes very tall people. They tend to be lean and lanky, with long, spidery fingers, curved spines, scant muscle, crooked chests and elongated faces and heads.

"I can be in a shopping mall or go to the beach and see people who might have the diagnosis," Dietz says. "Often you can get the impression that their legs and arms are far too long for the size of their trunk."

In addition, patients can develop joint problems, severe nearsightedness, spinal fluid complications and detached retinas. Many are severely flat-footed. Most problematic, the majority of Marfan sufferers have an enlarged aorta, the body's largest blood vessel. When the aorta is oversized, it is prone to rupture, which usually means death. This enlargement can also cause chest pains, dizziness and shortness of breath, as well as high blood pressure and shaking legs.

Currently, Marfan syndrome is incurable, but if diagnosed early enough and monitored, patients can have a normal life span. Those who go untreated often die in their 30s and 40s from an aortic dissection.

Judging by photos and the FBI's physical records, Osama bin Laden could be a candidate for the diagnosis. He is said to be between 6 foot 4 inches and 6 foot 6, which is apparently unusual for his family. He is thin, bony and has little muscle; he weighs only 160 pounds. And he uses a cane -- possibly the result of connective tissue or back problems. Other information about the leader of al-Qaida suggests he may have a heart condition. His facial structure also resembles that of people with Marfan.

"He is Marfanoid," says Dr. Richard Devereux, a clinician who treats patients with the illness at the Weill Cornell Medical Center in New York. "He seems to have long fingers and long arms. His head appears to be elongated and his face narrow ... It's certainly conceivable that he has the Marfan syndrome and could be evaluated for it."

Though people have long speculated about bin Laden having Marfan, federal officials won't answer questions about his health. "We don't discuss the medical conditions of our enemy commanders," says Maj. Jay Steuck, a Defense Department spokesman. And a Central Intelligence Agency spokesman says, "We don't do unclassified medical summaries."

Off the record, one official told me there's been a lot of speculation about bin Laden's health and that he wasn't sure whether it was genuine or generated by the multimillionaire's spin machine to make the leader seem more heroic. After all, what better way to gain sympathy among followers than to suggest he has an uncommon disease and has overcome all sorts of nasty obstacles to thwart his enemies? What's more, if he is ultimately killed by the United States, his supporters could conceivably argue that a rare medical disease killed him instead.

Stoking the mystery of bin Laden's health is his habit of wearing flowing robes, head coverings and a full beard: It's difficult to get a clear sense of his physical attributes. There's no way to tell if he has a distorted chest bone, for one. Even so, reports came out last year that bin Laden's hands were shaking and that two doctors from the United Arab Emirates were smuggled into Jalalabad, Afghanistan, to care for him. At that time, Yossef Bodansky, staff director of the House Task Force on Terrorism, told the New York Post: "We are getting a lot of reports and rumors. By all accounts, bin Laden is not a healthy man and is under a lot of stress."

David K. Schenker, a research fellow at the Washington Institute for Near East Policy, agrees that bin Laden's size is atypical for his surroundings. "I lived in the Middle East, and I never ran into anyone that tall," he says. But when I asked him if he heard about bin Laden's being sick, Schenker said, "What are we talking about -- the one where he is supposed to have kidney failure or liver disease?" He pointed out that it's common for figures like bin Laden to be followed by rumors of fatal illnesses.

Should bin Laden have Marfan syndrome, the stress of cave-hopping and trying to outrun Allied cruise missiles could prove deadly. "People with the disease are told not to engage in heavy exercise," says Dr. Darwin Prockop, director of the Center for Gene Therapy at Tulane University. "If Osama bin Laden has Marfan, he is in danger of sudden rupture of the aorta and sudden death."

Mark Francis Cohen is a journalist based in Washington, D.C.