There is a god

It was the worst that has happened to us, but a lot of blood later, I'm alive and have seen grace. 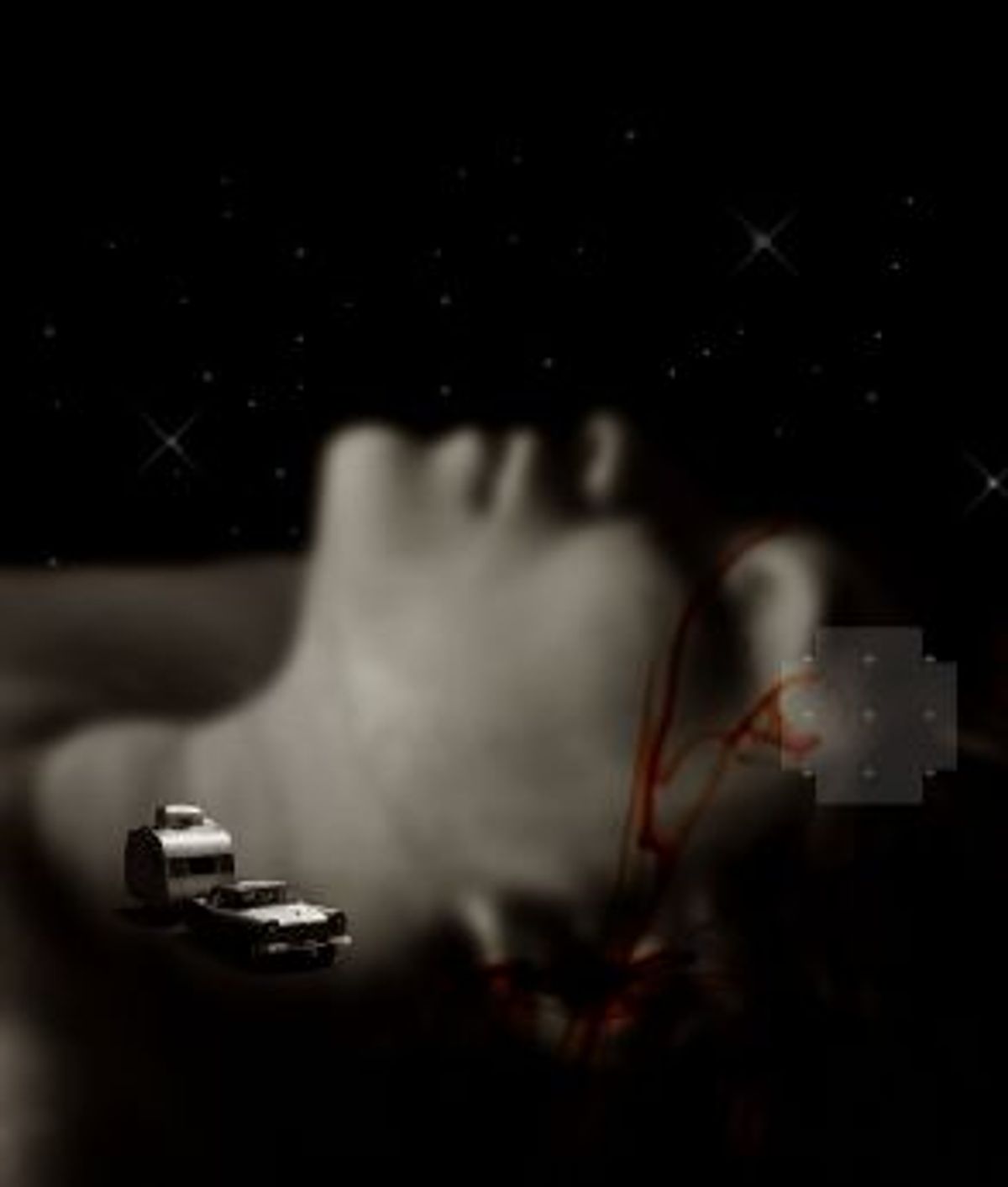 I have a hole in my favorite hat. The half-inch gash cuts cleanly through the appliqu&#233d letter on the front and the sweatband underneath. The hole corresponds to a new scar high in the middle of my forehead where my hair now grows back stunted. It also corresponds to the most desperate time we have yet encountered on our journey.

We went to San Felipe because it is warm and beautiful when other places are cold and not very beautiful. At times like these, this quiet Mexican village on the shores of the Sea of Cortez in Baja, Calif., is submerged beneath a tidal wave of vacationers who scour the liquor stores for tequila and the fish markets for shrimp. Old abuelas paint their colorful ceramic fish while their bored and weary sons hawk them to the frenetic tourists who throng the malecon -- the seaside street. Little village children, imitating their northern homeboys, gyrate to rap lyrics that blast onto the street from storefront boomboxes.

We also went to San Felipe because we thought our 19-year-old son, who joined us there, would enjoy mingling with his own kind in an exotic locale. As it turned out, what Luke enjoyed most was the opportunity to drink legally. We had not been more than a few hours across the border before he was shitfaced in the back seat of the truck, a six-pack of Corona stowed conveniently at his feet.

We found a deserted beach of golden sand and blue water just south of San Felipe. Aside from a group of young men from San Francisco who were camped in an abandoned building, we had the dazzling expanse of sun and sand to ourselves.

"I don't need to camp right on the beach," I said uncertainly. But my small voice was lost in the ambitious strategizing of the menfolk over the exact positioning of the trailer so as to catch the first rays of the sun rising over water to our front door.

My husband revved up the big diesel and got a running start. He shot around the corner of the abandoned building, skirted one treacherous patch of soft sand -- and landed in another. The tires spun, the truck bucked like a pony and dug in.

More strategizing ensued. Sand was dug out, boards shoved under tires and an alternate escape route planned. Blocking this route, however, was a row of rocks -- large, black rocks with jagged edges. Seeing an opportunity to be helpful, our son Stephen ran over to move them with all the enthusiasm in his 13-year-old heart. I walked up behind to help.

I never saw it coming. My husband did, and he said it was "a killing blow." I only heard an enormous crack, like a hardwood bat and ball, like a nut cracking open. My vision faded to pastel pinks and blues. I felt nothing, but I knew I was falling. "Is the world coming to an end?" I wondered. That, somehow, was a peaceful thought. For that particle of time as I was falling, everything seemed right and well-ordered.

My vision cleared, and I was staring at the sky. The two younger children, Julia and Stephen, were wailing with a terror I had never heard. I struggled to comprehend what had happened and eventually pieced it together from Stephen's anguished, "Oh, Mom, I'm so sorry. I'm sorry."

Luke and my husband came into my field of vision. "How bad?" I asked. Their answers were evasive. Blood was sticky in my hair and was running into the sand.

Quick, panicky thoughts darted through my mind like rabbits. How would I get medical care in this small town? How would we communicate? Would the expertise and equipment be adequate? Would they shave my head?

And worse yet, what kind of trauma had we visited upon our children? What foolish, romantic notions seduced us to take such risks? If our trip were to end like this, all we would have taught our children is that the world is an unpredictable and dangerous place, and it is better to stay home.

I lay on my back and listened to the anguished sobbing of my children. I looked at the trailer tilted at a crazy angle on the beach of this faraway place. From some inner urge that was neither confident nor particularly faith-filled, I said to them, "This is the worst thing that has happened to us. I can't think of anything to do. We have to pray." We joined hands. "Don't close your eyes, Mom," Stephen said, "it scares me."

I don't know what we said, if anything. I tried to reach through my fear (with my eyes open) to some place of peace and safety, to the sense that, even if the world were coming to an end, all would still be well. We held hands in silence for about 10 seconds.

"Hi. My name is Mike, and I'm an EMT. May I take a look at your head?" The young man's manner was calm and competent. His touch was sure and gentle. I hadn't seen him before, but I learned he was one of the four young men camped in the building beside us.

Within minutes Mike had cleaned the gash on my head, assessed my condition and explained my options. Most important, he met our desperation with reassurance and comfort.

The sun was setting, and the beach was growing cold. We decided that Mike would continue to watch me for signs of trouble, but that I was probably OK. We would endure the crazy tilt of the trailer for the night and try to free it in the morning.

My sons and husband helped me to my feet. Tufts of hair fell from my head, and I felt woozy from lying on my back. The bump on my head looked like a large and swollen third eye with a jagged, Y-shaped gash in the middle. I slapped a gauze pad smeared with antibiotic ointment over it. The boys helped me wash the sand and gore from my hair. Throughout the night, blood seeped down my forehead as I tried to forget the crack of bats hitting balls.

In the morning, Luke and my husband labored to free the rig. Mike monitored my condition and I sat, scarf on head, sunglasses over eyes, in the warm Baja sun. I didn't care about the trailer. I didn't care to move or talk. I felt strangely suspended in a limbo outside time and life. I sat and considered the things that mattered to me. I tried them on. Does this still matter? How about that?

I sat as the sun marked the bookends of the day. I sat as the trailer jolted free from the sucking sand and bounded over a road of rocks that the men and boys had literally built on the beach. I existed in some separate space, and I was content to do so.

By the next day Mike had ceased his ministrations. Luke had washed the blood from my hat and I began to clean the trailer. Time flowed back. Our journey continued.

Other than the hole in my hat and a tender scar on my head, I am healed. Of course, the memory of the incident is disturbing for us all. Tragedy had hovered closely enough for us to smell the rankness of its breath. It had perverted our mistakes and turned them deadly.

But mostly I am left with wonder and gratitude. I have always known that the world is uncertain and rife with human failure. I know that safety can't be guaranteed by gates or guns, by watchfulness or somnolent habits. For us, this time, providence visited as powerfully as hurt, and I can't help but believe that such grace permeates our existence. That it is as real as fear, as potent as evil and as close to us as our own breath. I have the scars to remind me.