The very naughty brothers Farrelly take on the weighty subject of inner beauty and come up with their sweetest -- and best -- movie yet. 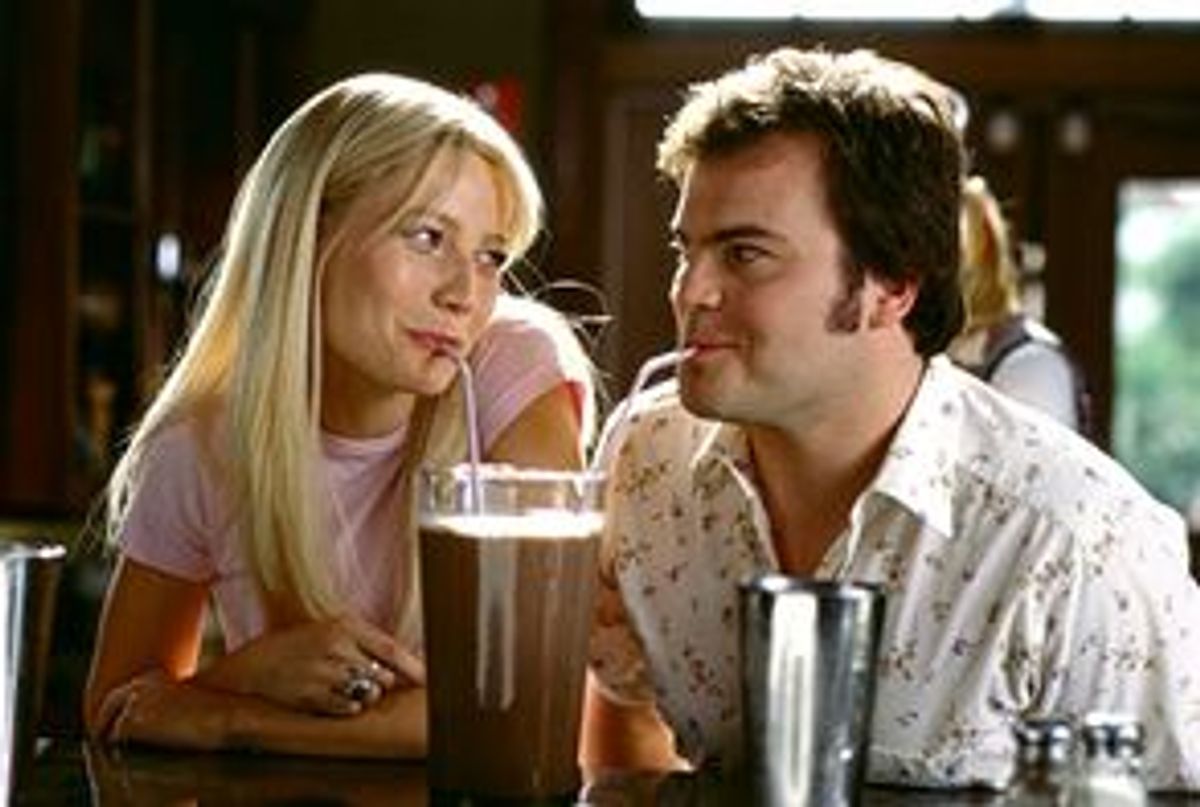 "Shallow Hal" opens with a dying man's advice to his young son, and they're words to live by: "Don't be satisfied with routine poontang." If part of what people love the Farrelly brothers for is their audacious crudeness -- it's actually an extraordinarily refined brand of crudeness -- that line certainly promises a wild ride. What it doesn't foreshadow is the pure sweetness of "Shallow Hal," a sweetness that sticks with you past the last frame without ever being cloying. "Shallow Hal" isn't the funniest Farrelly brothers movie, but it's the one that draws their knockabout humanist qualities into the tightest circle. Humor that's deemed inappropriate is often the most necessary kind.

Hal (Jack Black) is a pudgy, not overly good-looking guy who, after taking the advice of his dying dad, nevertheless thinks he's entitled to the most gorgeous babes. He and his pal Mauricio (Jason Alexander) spend most of their time comparing notes on which women are most perfectly suited to enter their dazzling orbit. They succeed with virtually none of them, of course, and can't accept what they have on the rare occasions when they do. (Mauricio rejects his knockout of a girlfriend because her second toe is longer than her big one -- this from a man who tries to disguise his baldness with what looks like a yarmulke of iron shavings.)

But then Hal happens to meet personal-transformation guru Anthony Robbins (played, with booming charm, by himself) and winds up receiving an impromptu "hypnosis" session. After that, Hal sees women differently. Those with the proverbial "inner beauty" are transformed into babes. Plain or average-looking women who work with the blind or rehabilitate drug-addicted orangutans (OK, I made that last one up, but you get the idea) take on the aura of supermodels. When Hal catches sight of Rosemary (Gwyneth Paltrow), a sometime Peace Corps volunteer who also spends much of her time helping out in the children's ward of the local hospital, he falls for her instantly.

To him (and to us) she looks like, well, Gwyneth Paltrow, in her usual svelte frame. To the rest of the world, she's an immensely overweight woman whose clothes don't fit her right and who walks with the awkward carriage of someone who just feels wrong in her body. But in the cruel shorthand used to describe less-than-pretty girls throughout the history of time, she has a great personality -- it's little wonder Hal falls for her. Hal's new gift of sight works in reverse, too: Now, when he looks at a hot gold digger, he sees a wrinkled hag.

The Farrellys weave their jokes nimbly around the movie's gentle message. "Shallow Hal" isn't out to teach us a lesson -- and if it is, we're in deep trouble, because the idea that beauty is only skin deep is something most of us should have learned long ago. But this is the most overtly sweet-tempered of all the Farrellys' movies, the fullest flowering of every good impulse they've ever had. It's something of a triumph for them, too, in that it's structured better than any of their previous pictures. Its pacing gets a little stringy in the last third, but it doesn't have the wayward waviness of, say, "Me, Myself and Irene" -- a movie that, amusing as it is, makes you work hard to follow its lackadaisical bread-crumb trail.

Some moviegoers may walk away from "Shallow Hal" disappointed that there aren't more outlandishly filthy gags. (There are none involving makeshift hair goo, although there is a pretty good conjunctivitis joke.) But the Farrellys (who also cowrote the script, with Sean Moynihan) are getting even better at knowing how to use the camera to get laughs: In one of the movie's best sight gags, we see Hal and Rosemary canoeing on a pond. Even though we're seeing the "thin" Rosemary, the one Hal sees, her end of the canoe is slung low in the water, while Jack, at the back end, is hiked high in the air. The Farrellys also know how to use casting to get a giggle out of us, by using veteran character actor Joe Viterelli (who, with a face like a map of the rugged Italian countryside, usually plays mob thugs) as Rosemary's winkling, twinkling Irish pappy.

Most of the actors slip right into the Farrellys' mind-set and carry the movie beautifully. Black, who was so lively and outlandish in "High Fidelity," has the right kind of leading-man energy for this particular role, mostly because he's something of a straight guy to Paltrow's beauty, which is used here as a lavish joke.

And she is without a doubt the movie's most winning presence; the whole picture turns on her performance. Audiences are often critical of beautiful women who play "ugly" -- when "Frankie and Johnny" was released, there was a tremendous outcry from people who refused to believe that a woman as beautiful as Michelle Pfeiffer could possibly be believable as a careworn, dateless waitress. (The subtext, a reverse kind of looksism, is that beautiful women can't possibly be unhappy -- and if they are, it's their own damn fault. Humanistic, isn't it?)

Paltrow looks as gorgeous as ever here: Cinematographer Russell Carpenter works some extra magic (and she doesn't need much) to bathe her in a golden glow. In the last portion of the movie she wears a fat suit, and the sight of her in it is as distressing to us as it is, at first, to Hal. This beautiful woman doesn't belong in that misshapen body -- which is, of course, precisely the point.

Even in her earlier scenes, where Paltrow looks like her gorgeous self, she still shows us what it's like to be a person who isn't happy with her body, just in the way she coyly averts her eyes when Hal compliments her or giggles with shyness when she appears in his bedroom in a surprise negligee. Her physical approach to the character is wonderful -- even thin, she puts herself into the body of an overweight person, walking with a slightly heavy, awkward gait.

And yet Paltrow understands that for the most part Rosemary is supremely confident. (She gets one of her best laughs when she's cutting down the aggressively rude Mauricio, taunting him about his Members Only windbreaker; she has no patience for foolishness or cruelty, whether it's leveled against her or anyone else.) Rosemary isn't a woman who allows herself to crumple into a heap of insecurity; that's part of the reason Hal adores her so. Paltrow's performance is lovely not because it makes us feel sorry for the fat girl, but because it makes us see why we shouldn't.

The Farrellys have always been unabashedly romantic filmmakers, but with "Shallow Hal" they put their hearts out there for us like never before. They're funny guys: Their movies are always presented as straightforward goofiness, yet they're often layered with surprising levels of depth and subtlety. "Shallow Hal" may be the best Farrellys movie yet, even though it doesn't live up to the pair's usual level of uproarious, crass comic genius. They're learning, movie by movie, to articulate ideas that are more and more sophisticated, without being oppressively heavy-handed.

You see it here in the way they delicately handle a scene between Hal and a child whose face is badly scarred, and in the way they've written the character of Walt (Rene Kirby), a rich, handsome, charming software mogul who, having been born with spina bifida, walks on all fours. Kirby isn't an actor playing a character with an infirmity; he has spina bifida himself. (The Farrellys met him in a Burlington, Vt., bar when they were making "Me, Myself & Irene.") As Kirby plays him, Walt is, next to Paltrow, the most charismatic character in the movie -- he may even match her.

But to anyone who's been paying close attention to any of the Farrellys' movies -- and their fans are legion -- that won't come as a surprise. I've come to believe that the Farrellys are as popular as they are not because they free our inner ids with their impish gross-outs (although that's part of it), but because they're fearless about confronting weird taboos and irrational anxieties: Their message has always been that even if it takes a bit of work to see people for who they are, it's always worth doing. If you were a beautiful woman hanging out in a bar and a raffishly good-looking guy approached you, walking on all fours, and offered to buy you a drink, what would you do? In the Farrellys' world, you'd accept with a smile -- not out of politeness, but because you couldn't resist. In Peter and Bobby Farrellys' world, good people win, and even the bad ones eventually come around to showing us their better sides. The Farrellys are very naughty filmmakers, but their naughtiness always serves a grander purpose. They're the Jean Renoirs of toilet humor.