A nation shellshocked by terrorism braces for the worst -- but in all probability, mechanical failure caused Monday's Flight 587 catastrophe in New York. 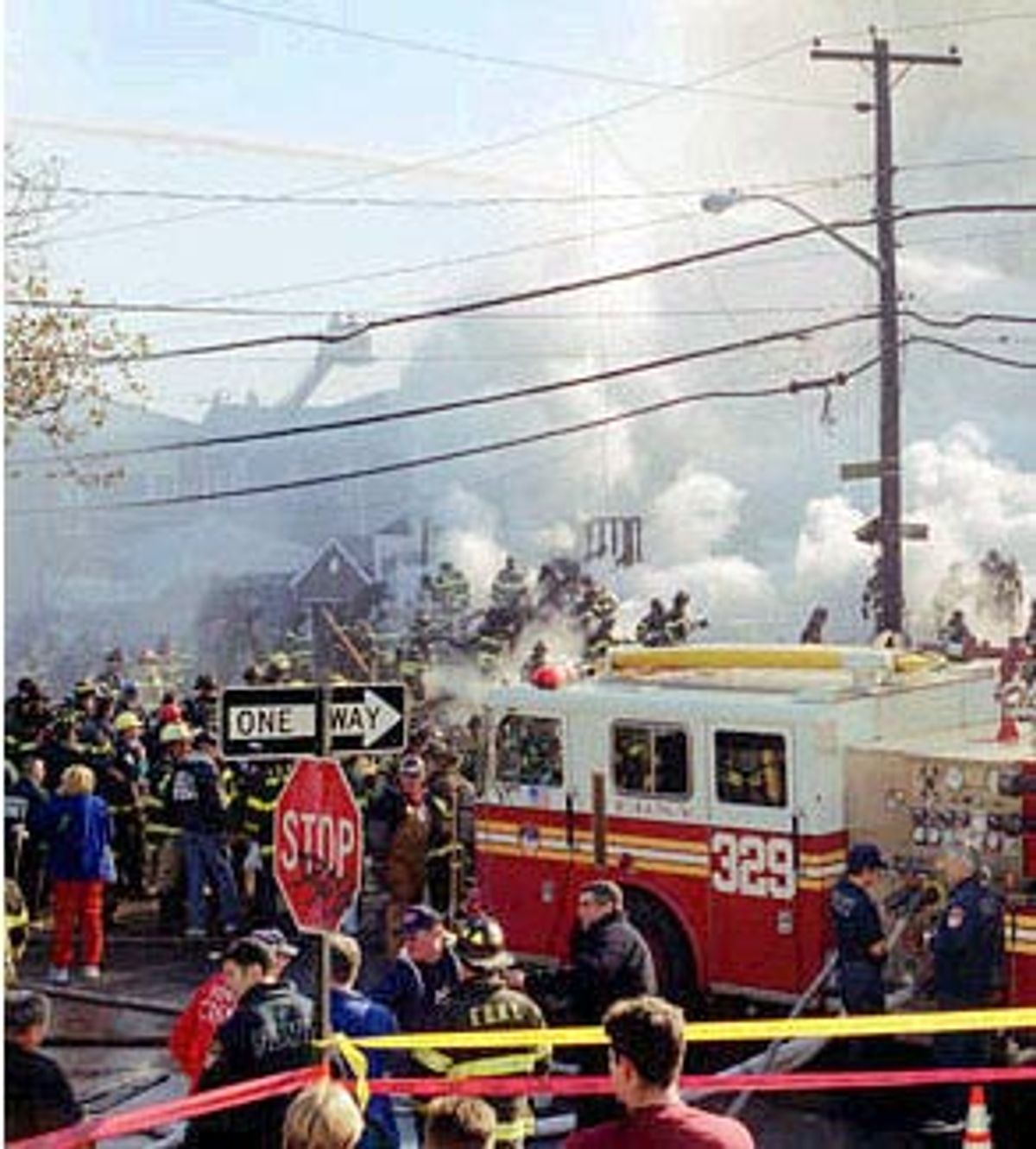 In the wake of Sept. 11, and those horrifying images of airplanes flying into buildings, it's not surprising that many people jumped to the worst conclusions about the crash of American Airlines Flight 587 Monday morning. Were there terrorists aboard? Did they sabotage the engine? Was it a missile attack?

It's a strange relief to realize that this airline disaster, though tragic, was almost certainly not caused by terrorism. The crash of Flight 587, which killed at least 260 people on board and 6 on the ground, appears to have been caused by old-fashioned mechanical trouble. No suicidal pilot, no bomb, no missiles. The Airbus 300-600 mostly likely had a catastrophic engine failure from which the crew could not possibly have recovered.

The loss of an engine could easily have damaged the plane in such a way that it broke apart, creating the four separate debris fields that investigators are currently combing. As the engine fell away, it could have torn off a control surface, sending the plane into an "unusual attitude" that quickly became aerodynamically unstable. "If the aircraft was out of control and turned in such a way that it had a sideways attitude to the airstream, the structure might not be able to handle it," points out Todd Curtis, founder of Airsafe.com and a former airline safety executive at Boeing. It's likely the departing engine ripped open the hydraulic lines, and then the pilots wouldn't have been able to control the airplane at all.

The Airbus 300's engine, the General Electric CF6-80C2, in fact has a history of catastrophic failure. In September, Aviation Week magazine reported two problems that the National Transportation Safety Board was investigating. One investigation was into problems with the engine "spool." Then came an incident last fall during a ground test at US Airways. One of the CF6 turbines mysteriously blew apart, shooting blades through the air and into the airplane body at high speeds.

In response to the NTSB report, the FAA mandated last year that all pre-1995 spools should be replaced within 15 years. Christian Flathman, a GE Aircraft spokesperson, confirmed that the engine spools had not been replaced on the American Airlines Flight 587 Airbus that crashed Monday morning.

The second danger to aircraft equipped with the engines, the NTSB concluded, was a General Electric manufacturing problem that contributed to cracks in the disk-blade slots. This past September, the NTSB recommended that the FAA demand regular checks on the disk blades. All three parts in question are part of the turbine, which is the last stage of the jet's engine.

Although the NTSB makes suggestions, it is up to the FAA to act on and enforce them. As of Nov. 12, the FAA had not yet ruled on the recommendation.

Whatever caused the problem on Flight 587, the loss of an engine is an instant emergency on any airliner. But it is one for which pilots train. Checklists speed pilots through the procedures for shutting down the failed engine and maneuvers that compensate for "severe damage" -- a category under which a missing engine would surely fall. Either way, airplanes are designed to survive the loss of an engine.

In the late 1980s, a spate of Boeing 737s lost engines on takeoff. The engines physically fell off on the runways as the pilots ran through the "engine out" checklists. The planes continued to climb safely and then returned to the runways and landed safely.

Those planes were able to fly back and land because they did not lose their hydraulic systems. The Airbus, by contrast, is particularly dependent on hydraulics. It is a modern technological marvel with a "glass cockpit" filled with digital instruments. It is a "fly-by-wire" machine in which electronic signals from the cockpit joystick activate hydraulic actuators in the wings and tail.

An exploding engine could shoot turbine blades through all three of the hydraulic and backup systems in the wing, severing the lines and rendering them completely useless. There is no checklist for the disaster of lost hydraulics on an Airbus. It is possible, however, that Flight 587's pilot managed to complete one of the tasks on his emergency checklist. Fuel spilled out of the wing before the plane crashed. This is standard procedure for emergency landings, minimizing the chances the plane would turn into an even more deadly fireball on impact.

This accident, then, is a return to simpler times in air travel. A mechanical failure is something understandable, something to be expected from high-performance parts that spin and click at high speeds for thousands upon thousands of hours. That is part of the risk that we accept when we travel on airplanes, and we accept it because it's extremely low.

But in today's post-terrorist age, not everyone is willing to accept such a simple explanation of Monday's accident. Let's consider a few of the other possibilities for a moment.

Suicidal pilots or terrorist mechanics? It's doubtful that even a single nonapproved pilot could get past today's heightened airport security. Besides, eyewitnesses reported seeing one of the plane's two engines depart the airframe -- either dropping off or exploding in flight. Could terrorists have fiddled with that engine before takeoff, wrenching loose a few pertinent screws? Not likely, given Kennedy Airport's ramp security. And the accident happened far too quickly after takeoff for it to have been the work of anyone muscling his way into the cockpit.

How about, as some dogged believers still argue happened to TWA Flight 800 in July 1996 off Long Island, N.Y., a Stinger missile?

It's a possibility, certainly, that terrorists could somehow have snuck a missile launcher within a few miles of one of the nation's busiest airports. They could have fired the large missile (something that no eyewitness in the densely populated area has reported seeing) and hit the engine. But that's not likely. Not only because of heightened security in New York, but because of the questionable terrorist value of downing this particular flight, which was headed to the Dominican Republic. It's a lousy target, particularly for people who have already demonstrated their skill in choosing effective targets. Air Force One would have been much more tempting. Or a plane full of American nationals the day before Thanksgiving.

A bird strike? Kennedy airport, a wide-open space in close proximity to the ocean and a big city, is a haven for seagulls and other birds. For small propeller airplanes, a bird strike can be fatal to the pilot, punching a hole in the plane or slicing off a wing. But airliners can handle it. Jet-engine designers gleefully toss frozen turkeys into spinning turbines to test them for "bird ingestion" limits. The engines suck them up, spit them out and keep spinning.

The best tool in understanding what happened to Flight 587 is Occam's razor, the philosophical theory I first learned from an NTSB investigator last year: When many explanations for an event are possible, accept the simplest, because it's by far the most likely. On Flight 587, that's almost certainly engine trouble. Of course, statistics are small comfort to those who lost loved ones on this flight, but the nation should feel some relief that this was probably not another breakdown in our anti-terrorist security measures.

Phaedra Hise is a freelance journalist, author and pilot living in Richmond, Va. She writes about aviation frequently for Salon, and covers business and technology for national magazines and newspapers.