Don't hate me because I'm beautiful 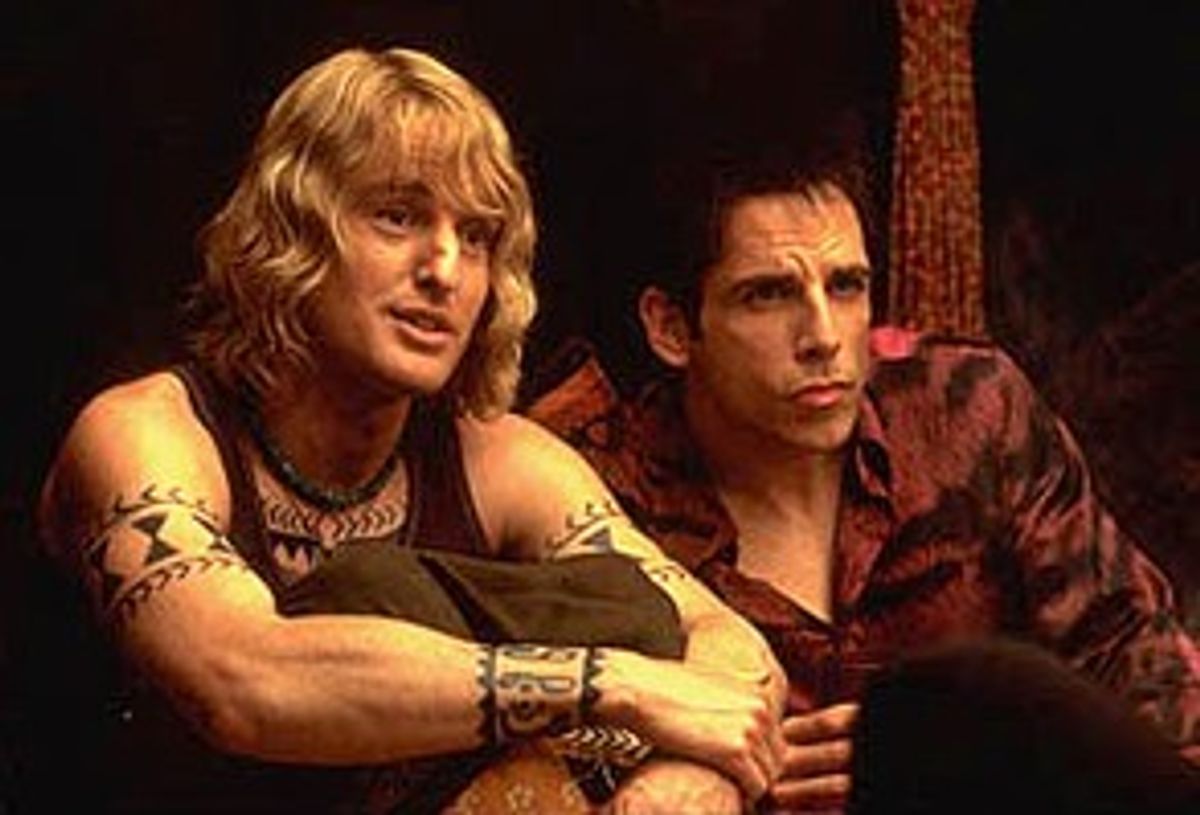 Damon and Gage are two really, really, ridiculously good-looking male models from New York's Fusion Agency. I had the privilege of taking them on a date to see "Zoolander," Ben Stiller's wickedly funny satire of Damon and Gage's chosen profession. (Like Madonna -- and Hansel -- the two go by their first names only.) After the film (they laughed at all the right moments), we decided to skip the orange mocha frappuccinos and head to Union Square's Coffee Shoppe for cocktails and a discussion of "ambi-turners," "eugoogalies" and whether it's a good idea to engage in a freak fest with an "investigatory" journalist. (More on that later.)

Like Fabio, Damon and Gage are known in the industry as "slashies." In addition to their male modeling careers, both have appeared as extras in the indestructible soap "As the World Turns" -- but not too often because they don't want to turn into "extra boys." Blond and blue-eyed, 23-year-old Gage looks like a taller version of Val Kilmer; Damon, 25, has green eyes and carefully messy brown hair (he uses moisturizer as hair gel) and refuses to admit that he looks like Ben Stiller. Gage showed up wearing a white sweater and tan pants underneath a floor-length white wool coat, while Damon sported a grungier, rocker look. For the first time in my life, I sailed past the smiling doorman and velvet rope of the notoriously strict Coffee Shoppe.

While Derek Zoolander skyrocketed to runway fame through a spectrum of "looks" -- including "Blue Steel" and the show-stopping, Malaysian prime minister-saving "Magnum" -- the Fusion boys said they do not have trademark expressions. "If I have a look, I guess it would be 'the Blank Stare,'" said Gage, giggling as he dug into a plate of fried plantains and sipped a frozen Cosmo. "Or 'the Pondering Moment.' Or 'I Can't Believe I'm Doing This!' Or 'Please Don't Make Me Look Stupid.' I don't practice my looks at home, but my agency says I should."

Damon refused to touch the platters of fried food, regarding the pile of grease with disdain. "It's probably a good idea to practice your looks," he acknowledged. "You don't want to waste the photographer's film. I should practice, but I always forget to." Damon paused for a moment and then brightened. "I'm in a band with a guy from Denmark who's also a model and he was showing me one of his looks. It's like this," he said, sucking in his cheeks and curling his lip in a sneer.

I asked the models if they polished their chiseled features with any secret beauty techniques. "Facials? No way. I don't use any of that stuff," said Gage.

Does he ever do freaky model things, like colonics?

"Hooked on phonics? What?"

While I have a soft spot in my heart for Zoolander (how could you not like a man who wants to start "The Derek Zoolander School for Kids Who Can't Read Good and Want to Do Other Stuff Good Too"?), Damon and Gage said they identified more with Hansel, but only after much prodding. "It's kind of a dumb question because it's like having to pick dorky or dorkier," said Gage, before finally relenting and choosing the shaggy-haired, New Age-dizzy model played in the film by Owen Wilson.

"Anyone who doesn't pick Hansel is a complete moron," said Damon with his best sneer. "Who would answer Derek? He's just a loser." I pointed out that Zoolander was the nicer one. "He was only nice after he lost the Model of the Year Award," shot back Damon. Incidentally, Gage did attend last month's VH1/Vogue Fashion Awards and said it was much cooler in real life. Derek Zoolander, however, refused to show up for his award, sending in a video explaining that he was rejecting the fashion industry honor "for Richard Gere-like reasons" that he and his handlers were still figuring out.

Neither of them could think of anyone in the modeling industry who resembled the diabolical Jacobim Mugatu (Will Ferrell) or the tacky Maury Ballstein (Jerry Stiller). But Gage thought the idea of a male model being groomed as a political assassin à la Zoolander was not too far-fetched. "I read a book about that, 'Glamorama.' Have you heard of Bret Easton Ellis? He also wrote 'American Psycho.' It's about a male model who is stupid but not too stupid and cheats on his supermodel girlfriend. In the end, he's inducted into this group of assassins. It's fucked up."

Damon, on the other hand, thought that male models would make poor political killers. "Assassins have to be clever and make quick decisions," he pointed out. "I don't know if a lot of male models could do that."

"Female models would be better because they go for rich dudes," said Damon, with a somewhat enigmatic leap of logic.

By this point, Gage was on his fourth or fifth shot of Captain Morgan and had stripped down to a tight black tank top. I was sloshing through my third beer, and had already been convinced to play a game of tattoo show-and-tell, which is never a good idea when your tattoo is etched onto your lower abdominal region (although the boys did compliment me on my leopard-print underwear). Damon was growing increasingly surly about the strict food and drink budget imposed on me by my editor. Gage was starting to make suggestive jokes about magic tea and Himalayan midgets. So I tried to change the subject by coaxing the boys into a dueling "walk-off" in the Coffee Shoppe aisle. They refused but said, for the record, that unlike Zoolander, they are both "ambi-turners."

"I can turn both ways on the runway, but one way is definitely easier," said Gage.

"Yeah, it depends on which foot you start with," said Damon.

"Really? So I guess I'm runway boy and you're more like print boy."

"Yeah, I'm just a diamond in the rough!"

Damon was suddenly distracted by the tall, "stretched-out" hostess. Both boys had established early in the evening that they were straight, but often mistaken for gay. "People assume I'm gay all the time, because I'm also a dancer and I kiss on both cheeks," said Gage. They feigned shyness when I asked them if male models had ridiculous amounts of sex.

So, I pressed on: Is it hard to be really, really ridiculously good-looking?

"I think you're very good-looking."

"Of course she's going to say that, dude. You believe everything she says? She's just trying to get a response out of you."

"Are you trying to get a response out of me?"

"Are you sexually harassing us? That is so unprofessional. I'm going to call my agent."

As it turned out, Gage didn't really mind being sexually harassed and, lifting his shirt to show off his six-pack, he launched into a game of "poke the abs."

The boys could have spent much of the evening debating whether or not they were absurdly beautiful. But we decided to settle the matter once and for all by unleashing Gage into the Coffee Shoppe crowd to see if he could entice anybody to join us in a Zoolander-Hansel-style freak fest. He quickly lured a cute ballet dancer over to our table. We giggled for a few minutes, but she passed on the freak fest. Next we targeted two blonds sitting at the bar who looked like they were straight out of ABBA. Again Gage served as our emissary. They told us they thought we were "very adorable" but Tuesdays weren't good for a freak fest. "How about Friday? We can do it on Friday."

The evening was ending on a discouraging note. The power of male beauty was failing to conquer all, or even any, of these busy New Yorkers. But Gage was still thinking positive. "You know, one of the benefits of being a male model is that you can burp in public and still be sexy." Who said glamour is dead?