From crackpots to gurus

Survivalists are getting some respect, and lots of new friends, as worst-case scenarios get serious attention. 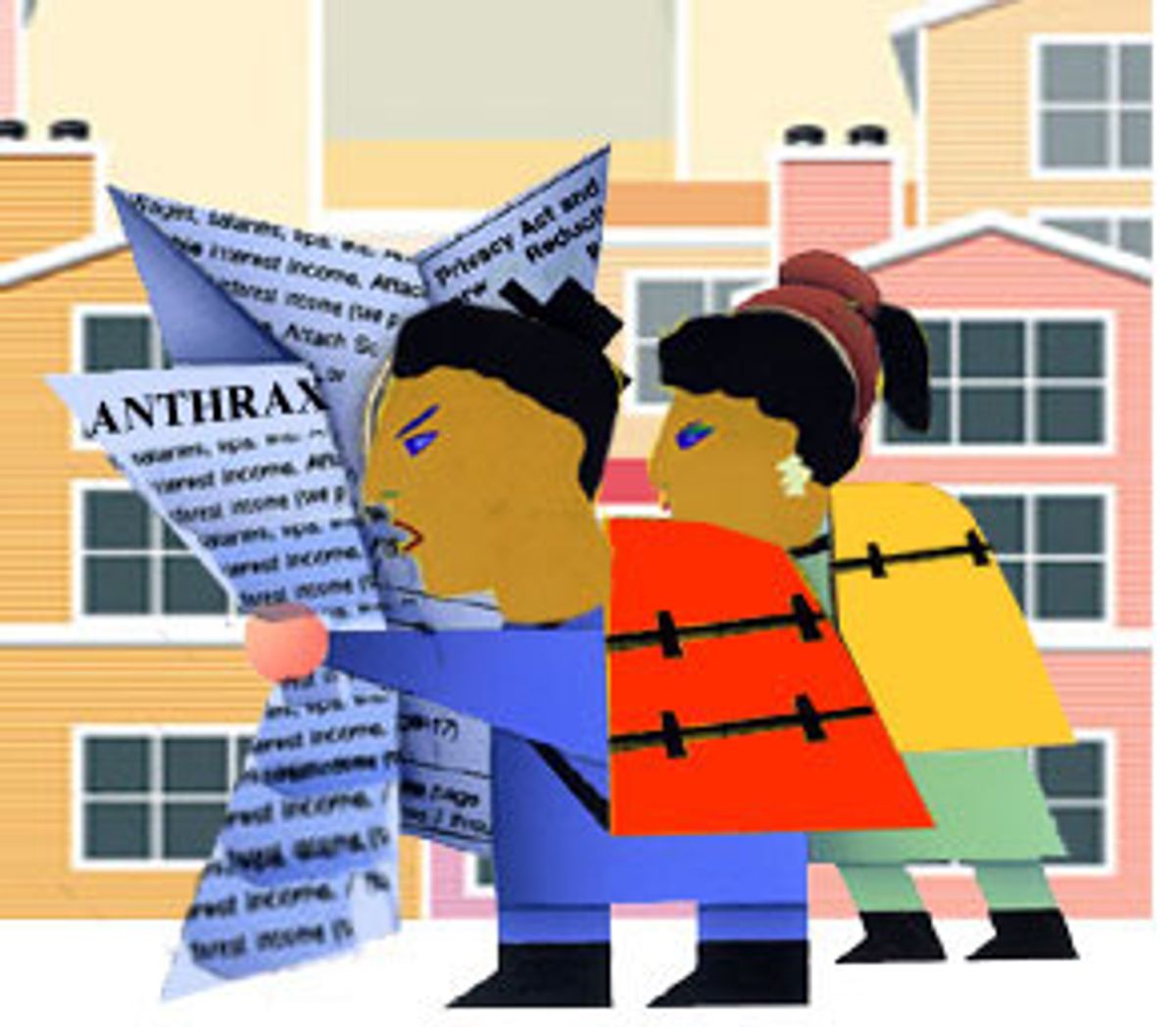 If terrorists strike again, Bill believes he is ready -- no matter what form the attacks might take. In his rural home he keeps biowarfare chemical agent detection paper, airline smoke hoods, P100 disposable protective face masks, a Geiger counter and radiation pills; plus a freezer full of beans, 19 containers of water with filters and an air cleaner and a roll of plastic and duct tape to fashion a "safe room" in case of chemical attack.

Bill -- no last name, just "Bill," as he anonymously posts on misc.survivalism newsgroup -- says he's kept this protective arsenal around for years "just in case." He's an old-school survivalist, once the target of widespread eye rolling and derision, now a respected font of sought-after tips for staying alive in the wake of Sept. 11.

"My neighbor used to call me her 'psychotic neighbor,'" says Bill. "Now she is asking me questions about self-protection and stocking up on some things like food, getting protective masks, a battery-operated radio, etc."

Ever since a handful of terrorists managed to commit crimes that few Americans, other than Bill and his comrades, were able to imagine, the scramble to be prepared for something akin to the apocalypse has escalated mightily. There's been a nationwide run on gas masks; Cipro sales are through the roof, as are military rations and chemical protection suits. People who considered themselves prepared for the worst if they had fresh batteries in their flashlights and beer in the fridge have begun to ponder smallpox outbreaks, the destruction of major bridges and urban tunnels; poison drinking water and general chaos.

Americans, eternally smitten by Hollywood action figures, wild West pioneers, and lovable bootstrapping heroes, have always loved a worst-case scenario. Witness the runaway success of the "ironic" "The Worst-Case Scenario Survival Handbook," which has instructed hundreds of thousands of readers how to jump from a moving train, escape from a sinking car, survive adrift at sea and perform an emergency tracheotomy. The most popular television show of the last two years is called "Survivor."

But much comfort has come from the heavy influence of fantasy and irony in this romance. Suddenly, we have proof that awful things can, in fact, happen. We seriously contemplate the possibility that the worst is still to come. And people like Bill -- the crackpots, extremists, paranoiacs and alarmists of three months ago -- are the gurus of right now.

The iconic survivalist hasn't had a very positive public image, due, in part, to the past behavior of survivalist-identified folks like the Freemen and Randy Weaver. Just a few weeks ago, authorities in Illinois seized 12,000 rounds of ammunition and bomb-making materials from a group calling itself the United Survivalists of America, adding more fuel to the idea that survivalists are violent anti-government alarmists whose preparations are likely to trigger the all-consuming disasters they predict.

But many Americans who call themselves survivalists, some of whom have only recently adopted the label, argue that a very small percentage of all survivalists could be described as extreme. While the survivalist community has its share of radical isolationists, gun nuts and fundamentalist Christians, it also includes a somewhat benign corps of hunters, outdoorsmen, farmers, libertarians, environmentalists and reasonable grown-ups who simply believe in preparing for disasters. The divergent strains of survivalism, say its boosters, all intersect with the collective belief in self-reliance.

The Live Free Survival movement, for example, has been around for several decades and boasts some 400 members according to its president. Ever flexible -- and plugged in enough to understand the publicity value of latching onto current events -- the group has seized the threat of terrorism as a big part of its motivation and promotion. The group originally taught essential outdoor survival skills and hazard analysis and offered instructions on how to prepare for nuclear war. It has broadened its advice menu since Sept. 11 to include shopping guides to the best silent weapons and nuclear fallout shelters, while recommending that in addition to the portable "survival pack" that every American should have -- packed with a minimum five days' of food and water, temporary shelter and medicine -- they should include Tyvex suits and gas masks, in case of biological attack.

Coincidentally, the group's long-held motto is ostensibly patriotic -- survivalism, they say, is all about being a good American. "You can't be your brother's keeper until you are your own keeper," explains James Jones, the group's president. "Being prepared is a civic responsibility: Once you've done it, you can help other people. If not, you may be a burden on the system or endanger your neighbors. It's not being paranoid, it's good citizenship."

According to Jones, who prefers to be called a "self-reliance and preparedness advocate" ("When we don't want to say 'survivalist,' that's what we say," he explains), the Live Free Survival movement was popular during the Cold War, but its membership fell off as concerns about nuclear war faded.

"In the last few a years, since the Cold War downgraded, everyone got a comfortable feeling, and our staff and volunteers went out the window," says Jones. "Then this happened and now we're hard-pressed to answer all the mail."

In addition to firing off letters to Live Free Survival, neophyte survivalists also are heading in droves to the Net for information on what to do to prepare for attacks. There, they are finding emergency FAQs and survivalist Web sites that offer instructions on how to install solar heating systems, purchase gas masks and freeze-dry food for storage. Jim Benson, the editor of the new online survivalism magazine ModernSurvivalist.net, says that his subscriptions have doubled since Sept. 11, and he's obliging his readers by filling his magazine with terrorism-related advice and information about self-defense (in particular, how to use really large guns).

Benson sees a frustrating lack of specificity on the part of the government about survival techniques as the main reason his publication has become so popular. "The government is doing everything they can to help us, but they can't promise anything. People can do a lot more themselves to help themselves," says Benson, who hopes that the new interest in survivalism will boost his publication. "Chance favors the prepared. That's why people like to have things like gas masks, NBC [nuclear-biological-chemical] suits to protect against radioactive fallout or aerosol anthrax."

It is possible that a majority of Americans will not rush to subscribe to Benson's publication, or buy themselves big guns and a nuclear fallout suits; but the essence of Benson's belief -- that chance favors the prepared -- is being cribbed by many who never before considered themselves survivalists.

"I used to roll paranoid scenarios around in my head for fun, but now, channeling Tom Clancy just isn't what it used to be," says John Courte, a 35-year-old technical director at Digital Domain in Venice, Calif. "The most horrible things we can think of just became plausible, or even likely."

These days, Courte says, "I never have less than a half-tank of gas in my Xterra," Courte says, in case he has to flee the city. "In the back of it is a sleeping bag, a spare pair of hiking boots, a couple of MREs [military ready-to-eat meals], a mag flashlight, a pair of cargo pants, a jacket maps, and a Marine combat knife. This isn't paranoia, this is readiness."

Michael, a 34-year-old medical administrator living in the Pacific Northwest, asked that his full name not be used in his description of the steps he has taken for survival. He has stocked up on food and water, kerosene for his Coleman stove and first aid supplies; his camping gear has been stashed close at hand under the bed, alongside copies of all his important documents. He has updated his passports and applied for one for his baby son, just in case, and has planned out routes of escape with his wife.

"Most importantly, my wife and I sat down and talked about what we would do if bad things happened," he says. "How would we decide to stay put or flee? If the latter, where would we go? How would we get there? What could we expect to find once we got there? Keep in mind, we're city dwellers, and like most people, we don't have a second house in the country." Michael and his wife have put together disaster plans for a number of scenarios, he says; nothing drastic, "but at least now we feel a little more mentally prepared."

These are exactly the kind of preparations that Bill's crowd at misc.survivalism -- the online ground zero for survivalists -- would approve of. The newsgroup, which typically overflows with discussions of everything from the merits of crossbows vs. flintlocks to recipes for nutritious food pellets, is now avidly debating how to prepare for any number of terrorist scenarios that might disrupt the system and send citizens of America running for cover.

Their grisly discussions have helped boost the survivalist service industry, scrambling at the moment to keep in stock all the gas masks, chemical suits, booties and gloves now in demand. TheEpicenter.com, an online preparedness depot, already has run out of those supplies, and is now struggling to meet requests for demand for MREs and alternate water and energy sources.

"In the last month we've seen a tenfold increase in some products, maybe sixfold in others," says Brian Nelson of Epicenter. "New stories will come out about the guys hanging out where the crop dusters were -- and gas mask sales will go ballistic. Then it's stories about how vulnerable the water supply is -- and then water barrels, filters, purification systems go ballistic. Then there's a story about the food supply or about daily rations we're dropping in Afghanistan, and then all of the sudden the military meals will spike."

In fact, much of this gear is not likely to be very useful in the event of a terrorist attack. Many gas masks aren't capable of screening out biological contaminants; and the mask, along with the biohazard suit, has to be worn around the clock to be in place for a surprise attack. Doctors don't advise self-diagnosing and treatment with Cipro, either: If you really think you have anthrax, you're probably going to need to visit your doctor anyway.

Still, many Americans under the influence of a government-issue generic request to be "beware of suspicious activities," are succumbing to the advice of hardcore survivalists, tempted by what they have seen and what they don't know, to be deeply pessimistic. And, in the sense that it hammers home the point of preparedness, there is probably little harm in hanging around with the survivalist crowd. Anyone who lives in earthquake, tornado or hurricane territory knows that it doesn't hurt to have at least a few days worth of food, water and candles, warm blankets and first aid kits on hand.

But does it hurt to also stash away military meals, water barrels and a generator? Some say it does -- at least psychologically. If gas masks and guns become the totems of the post-terror America, say critics, Americans give up the pride of pre-terror America -- the freedom to live without fear. And in some ways, almost any preparation can be interpreted as surrender.

Americans may have been naive to believe -- before Sept. 11 -- that we would always be safe at home. But, say those who oppose extreme preparation for future terrorism, we would be equally naive to believe that gas masks and drums of fresh water will somehow, like magic charms, ward off the threat of terrorism. For that, they say, we must do the harder work of helping facilitate geopolitical change.