With terrorist threats to the left and air disasters to the right, why would anyone pack up two kids to fly to New York for Thanksgiving? 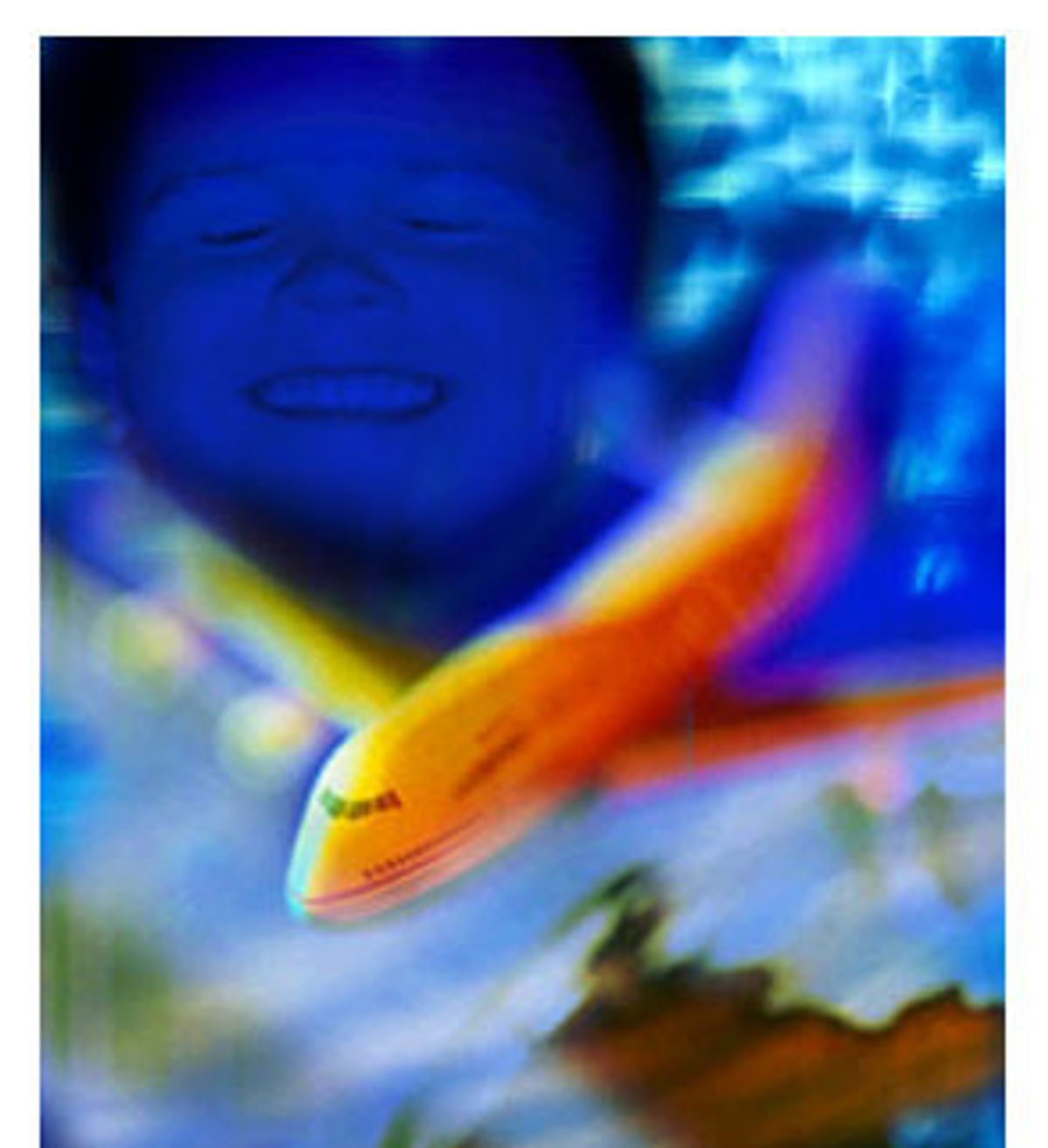 When I first heard the news that American Airlines Flight 587 had crashed in New York, I was already wrestling with a separate, but seemingly serious, air-travel worry. On Saturday, my children, wife and I are scheduled to fly to New York for Thanksgiving. But the new restrictions on carry-on luggage were stressing me out.

Through years of flying cross-country with two kids (a 7-year-old girl and a 3-year-old boy), we have developed a support infrastructure as intricate and comprehensive as an army supply line: Food bag, diaper bag, toy bag, kids' backpacks, parents' laptop cases. With two items per passenger, it all works. But with one per person (plus a purse or briefcase), my years of meticulous preparation were for naught. How inconvenient!

Then came the news of yet another jumbo jet disaster. And worries that I had successfully suppressed since the Sept. 11 attacks surged up once again. Never mind the tragedy that my son is still not potty-trained; with aircraft catastrophes becoming a monthly occurrence in the New York metropolitan area, there appeared to be bigger things to worry about. Was I crazy to be flying to New York? What kind of parent would load his kids on a plane headed to ground zero?

Logically speaking, one could argue that the week of Thanksgiving, this year, right now, is the most dangerous time to travel. It is hard to imagine a more appetizing terrorist target than aircraft flying to or from New York on the busiest travel days of the year. With each new report detailing the incompetence of the company that runs most airport security, my sense of complacency over the possibility of future disasters seems loopier and loopier. Isn't discretion the better part of valor?

But logic cuts both ways. Flying is still safer, statistically, than driving. And there is no clear evidence demonstrating that this newest crash is anything more than a horribly mistimed malfunction. A "normal" plane crash before Sept. 11 wouldn't have kept me from flying, so why should I let this one keep me from getting airborne?

The answer is, I'm not. We're going ahead with our plans to fly, just as the airline industry and President Bush want us to. We will soldier on through our fears of terrorism, and even our carry-on luggage angst.

It's not because of some bogus macho bravado, a need to stand tall during America's moment of trial. And it's not for the more temptingly plausible reason of wanting to maintain a semblance of normalcy in my kids' lives. No, the real answer is both troubling and cathartic. The primary psychological impact of the terrorist attacks on me is not that I feel that the world has changed in some fundamental, awful way, but rather that the real world has been revealed.

We live in a dangerous, unpredictable and untamable world. Planes crash. People die. Wars, plagues, famine and murder are commonplace. I could stay in Berkeley, Calif., with my kids and get wiped out by an earthquake. That's life, and hiding under our beds is no way to deal with it.

My kids are incredibly experienced fliers -- their grandparents live on the East Coast, and they have made at least three cross-country round trips a year ever since they were born. It's gotten to the point that the first thing my 3-year-old son does when he gets on a plane is pull out the pictographic airline safety card that delineates where the exits are and what to do in a crash. He examines these cards with great care, and enjoys telling me all about the inflatable stairs and the rubber rafts.

He doesn't have any concept of what a crash would really mean, and I am in no hurry to lay it out for him, but I did realize, a few days ago, that he was already growing up in a way that I never had.

He had built a tower out of blocks, and as is his usual practice, he was destroying it with gusto. Only this time, he had chosen to demolish it by flying a toy plane into it. That's how towers get knocked down, he informed me.

He's only 3, so I didn't have the heart to instruct him that his act of mock destruction was a ghoulish replay of actual events that had killed thousands. But he had heard me explaining to his sister what had happened Sept. 11. And this was what he had internalized: Towers get knocked down by planes.

For American adults, the World Trade Center attacks represented a new and awful development. But for kids, it's simply the world that they live in, now. My son will grow up knowing that towers get knocked down by airplanes. I'm not sure whether that's healthy or not, but it's a reality -- the potential for mass murder in such a fashion is something he never had a chance not to accept.

As parents, we want to protect our kids from such realities. When a plane hits a particularly bad air pocket, even as my heart stops in my throat, I smile at my kids, and encourage them to think of it as part of a fun roller coaster ride. And my initial attempt to justify flying to New York this coming weekend played upon a similar rationalization. If we just act like everything's normal, the kids won't get upset (and, I hope, the airlines won't go bankrupt, and the world's economies won't plunge into a new Great Depression). By not canceling my flight, I could be trying to help my kids (and myself) hold on to the idea of a United States that is safe from threat -- even as I am more and more convinced that ever greater disasters lurk in the offing: nuclear terrorist incidents and all the rest.

As I examine that rationalization more closely, though, I realize that I'm not really trying to protect the kids -- I'm trying to protect myself, trying to preserve for myself the possibility of a normal life, with turkeys at Thanksgiving, and bad movies above the clouds and friendly skies and all that.

But normalcy is the illusion, as anyone who lives within a mile of a major fault line should be the first to tell you. In the end, I'm going to go flying with my kids not because I don't think it's dangerous, but because I know it's dangerous. Because life is dangerous, and if we're going to live interesting, full lives, we just have to carry on.