In the first plane to land after Flight 587

We came down in view of two crash sites and surrounded by thousands of ghosts. 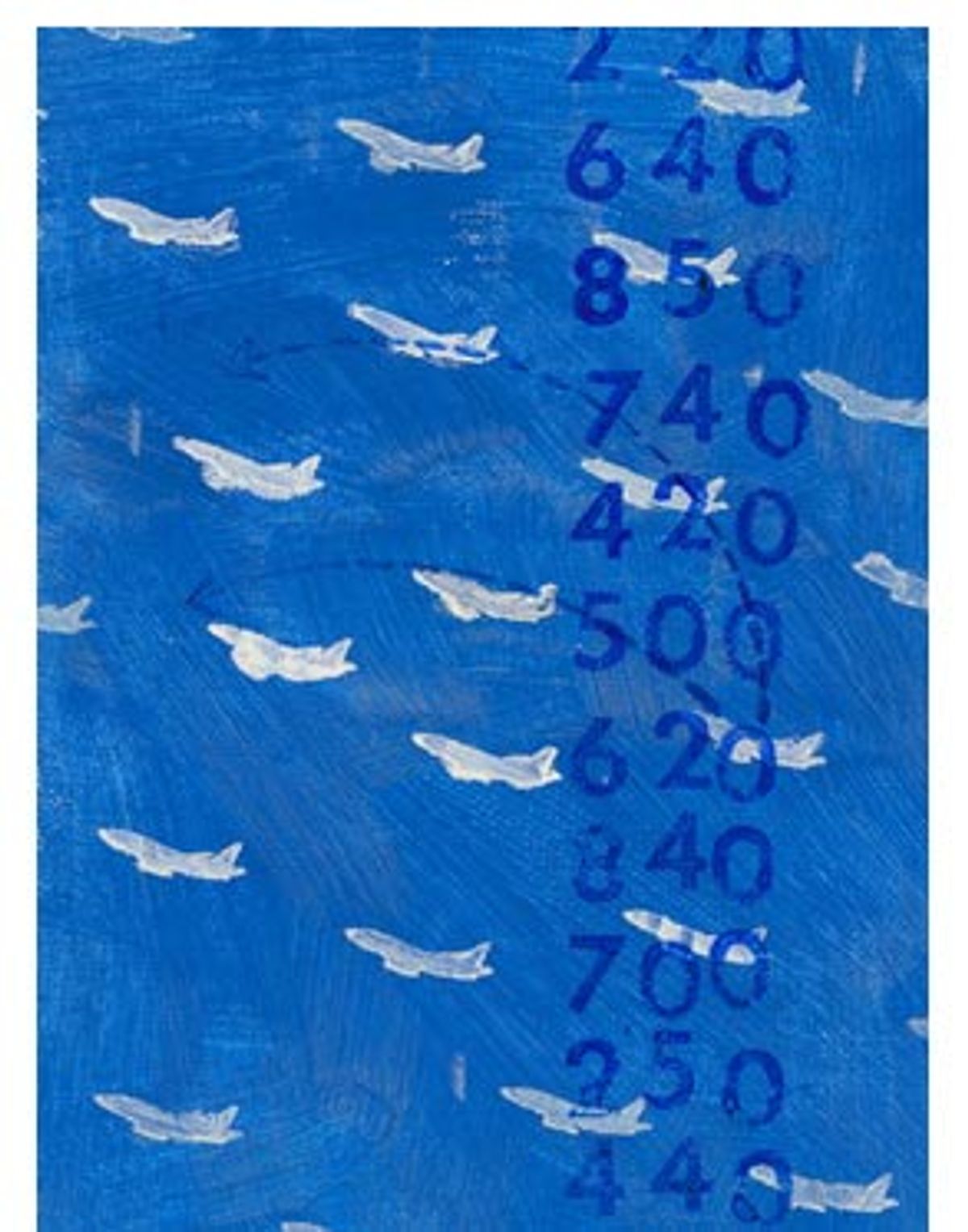 Schiphol Airport in the Netherlands, world-renowned for security and convenience, features an unguarded observation deck and a bicycle path that follows the contours of the runways and taxiways. The airport's railway station lies along the north-south line linking Amsterdam with Rotterdam, Antwerp, Brussels, and beyond. The station sits not at some outlying transfer point, but within the terminal building itself, a 30-second escalator ride from the ticket counters and arrival halls.

Yesterday, at 10 in the morning, I was clearing immigration at Schiphol. There were no long lines, no soldiers, no ransacking of carry-ons -- just the smooth and orderly flow of passengers through no fewer than three security checkpoints in an atmosphere of cool, confident, European efficiency. Three times I passed through a metal detector -- my luggage was pulled quickly beneath an X-ray machine while the magnetic strip of my passport was swiped for verification. Down below, I knew, suitcases were being sniffed, X-rayed and pressurized. Nobody asked about nail clippers, files, or scissors. Total elapsed time from check-in desk to departure concourse? About six minutes.

At the departure gate, I assured an anxious traveler that all was safe and secure. "I feel safer flying from Europe than I would from Chicago or St. Louis," I told him. Next to me on the Boeing 767 sat a young Kuwaiti businessman.

An hour prior to landing at Kennedy Airport in New York, the captain made an announcement. I knew it was something important because the graying commander spoke not in a disconnected drawl from the cockpit, but while standing at the forward bulkhead, the P.A. phone in his hand, eye-to-eye with the passengers.

"I'm afraid I have some unfortunate news," he announced. My initial thought was, "Not again." On the chaotic morning of Sept. 11, I had been airborne as well, deadheading from Boston's Logan Airport, my plane eventually diverted to Charleston, S.C. From an aisle seat I had looked through the window and watched American Flight 11 roar down Logan's Runway 09.

Holding out his hand in a gesture of reassurance, the captain went on to explain there had been some kind of crash near JFK, and our flight would be redirected to Hartford, Conn. The result of this turned the business class cabin into a hive of anxious conjecture. People whispered, assumed the worst, left their coffee untouched.

Descending in the airspace around Hartford, we suddenly lurched skyward again and were informed that New York had reopened and was accepting traffic. We headed south across Long Island Sound and made our approach to Runway 31L, necks craning, passengers peering across from aisle seats to search out a crash site. And there it was, though I don't think most people saw it: a distant mist of gray smoke, like a tiny, isolated fog bank against the clear blue afternoon.

The plane had gone down in the Belle Harbor section of Rockaway, a skinny stretch of neighborhood merely a few blocks wide, not unlike the Florida intercoastal. On one side of Rockaway is the open Atlantic, on the other is the huge marshy basin known as Jamaica Bay. The islands of this bay comprise a wildlife refuge and something called the Gateway National Recreation Area, at the northeast corner of which rest the runways of Kennedy Airport. As a pilot based at JFK, I once saw a pelican resting in the grass along a taxiway.

In 10 years of commercial flying I have never seen a crash site before. Now, without even the need to shift my gaze, I could see two of them: the smoldering wreckage of the American A300, and in a straight line to the west, 15 miles away, the vacated chunk of sky that was once the World Trade Center.

It would be unwise, at this point, to offer up theories as to what caused Flight 587 to go down. Suffice to say, in even a best-case scenario, it was an accident of uncannily bad timing, if indeed there is a good time for 270 people to die violently. Was it a bombing, a fulfillment of this author's worst fears and suspicions after Sept. 11? Or was it the failure of machinery, the occasional and inevitable result of the tossing of our fates to the gods of luck and technology?

Shit happens, I suppose, which is a cavalier way of saying that yes, sometimes a $70 million flying machine can indeed break to pieces and fall to earth, even when we can least afford it. "Engine failure," is a media propagated buzzword that many people associate with disaster, and the engines of Flight 587, huge turbofans manufactured by General Electric, are receiving their share of attention.

Commercial jets are built and certified with engine failures in mind. Should an engine cease to operate, even at the most critical moment of a flight (those few seconds at takeoff when gravity is at last, and strainingly, defied), the aircraft will continue upward with little more than a shudder. But airplanes are not necessarily designed to withstand uncontained disintegration of their power plants, when molten shrapnel is flung at near supersonic speed into fuel tanks, control cables, and even the cabin.

Just ask Capt. Al Haynes, surviving commander of the United DC-10 that crashed in Sioux City, Iowa, in 1989, his control systems rendered useless thanks to an engine that became a giant fragmentation grenade, bleeding the aircraft of its vital hydraulics.

That is, for now, the running theory. But the most experienced pilot in the world can offer no more than this kind of hunch. We'll wait, perhaps quite nervously, until the black and orange boxes give up their secrets.

I'm thinking of this as I stand curbside after finally clearing customs and emerging into the cold daylight. Our aircraft was the first to land after the crash, touching down at about 2 p.m., an Aeroflot 767 coming in just behind us. Above me looms the enormous oval rooftop of what was once the Pan Am Worldport and is now renamed, in an almost sacrilegious ignominy, Terminal 3. This was where the Beatles made their infamous "bigger than Jesus" declaration, and where dignitaries and movie stars once boarded smoky old 707s bound for every conceivable latitude and longitude.

This is an airport of mystique, a place designed a half-century ago when the airline biz was still rife with delusions of eternal glamour. Its terminals, laid out in a great circle, were called "jewels in a necklace." You can check out architect Eero Saarinen's iconic -- and now filthy -- TWA terminal, a listing on the Register of Historic Places. Over at American, you can even see the world's largest stained glass window. In the seventh grade I made a trip here, a sort of junior pilot's pilgrimage in which, without my parents' knowledge, binoculars in hand, I spent the day at the Worldport's rooftop parking lot, Shangri-La for a 13-year-old airplane nut.

What I discover here is something I'd never expect to find at Kennedy Airport in a hundred years, and if we're lucky, I'll never find again: Instead of the normal, 100-decibel whirlpool of cars, buses and humanity, there is almost total silence. No vehicles, no noise, no people. Not even a taxi. I can hear my own footsteps echoing off the overhanging concrete. It is so deserted that a Port Authority cop will actually have to call a cab so I can make my journey across Queens to catch the shuttle from LaGuardia.

And as my yellow taxi rides northward away from the complex of terminals and hangars, the gray pall from Rockaway no longer visible, I'm thinking too about the many ghosts of this place. I think of Pan Am 103. TWA 800. EgyptAir 990. Swissair 111. Eastern 66. Avianca 52. KAL 007. The Air France Concorde. And even the great granddaddy of them all, the Pan Am 747 that crashed on the island of Tenerife in 1977 as part of the worst aviation accident in history. And now this.

Acts of willful sabotage, acts of God. Bombs, suicides, simple mistakes. Whatever the causes, all of these high-profile accidents, and others, involved flights that originated from, or were en route to, John F. Kennedy International Airport. And with that in mind, maybe suspicions and investigations are not, after all, the order of the day. We can put aside the specter of terrorism for a minute, and instead acknowledge the thousands of souls whose fate was intertwined with this enormous swath of asphalt, glass, and aluminum flying machines at the far end of the world's greatest city.