David Mamet sucks all the joy out of a venerable genre in his latest staccato, clich 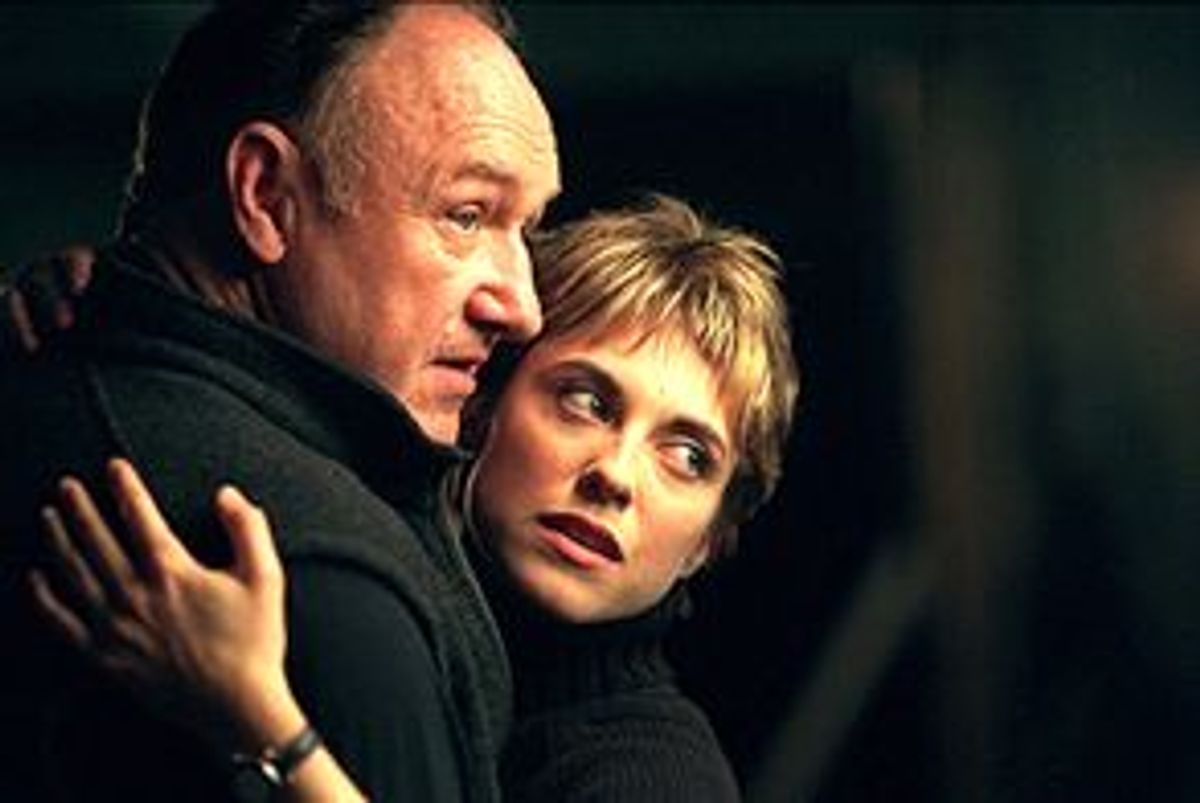 "Heist" opens with the Warner Bros. logo in black-and-white, accompanied by the studio's theme music familiar from the gangster films and muckraking melodramas that characterized Warners in the '30s and '40s. "Heist," though, was written and directed by David Mamet, which means it's taken much more seriously than any genre movie would be, although it doesn't have any of the crude energy or spark or pacing of good genre filmmaking.

"Heist" is Mamet's latest game of guess-who's-screwing-who? And at this point who still cares? Gene Hackman plays a professional thief who's "burnt" -- his picture is picked up by a video surveillance camera during a jewelry store robbery. He decides it's time to retire, but the sleazy furrier (Danny DeVito, in a role that he's outgrown) who financed the job refuses to give him his cut of the proceeds unless Hackman and his crew pull off a robbery that he's set up. Having no money to run with, Hackman agrees and assembles his crew (Delroy Lindo, Ricky Jay and the inscrutable Rebecca Pidgeon). He's also forced to take on one of DeVito's men (Sam Rockwell, who wears the same mustache he had in "Galaxy Quest," a thing that looks as if he soaks it overnight in sardine oil). What ensues is the usual Mamet shell game of double crosses and scams and betrayals.

Is it too much to ask of a movie that details the exploits of professional thieves and con men to have some verve or style or sense of humor? The pleasure of watching (or reading) a story about thieves is to settle for a few hours into the mind-set of the fleecers, to fantasize about what it would be like if you could just take what you wanted instead of having to work for a living. That's the joy of the comic crime novels of Ross Thomas, Joe Gores and Donald E. Westlake. Even in a picture like "Heist," which is clearly intended as a diversion, an exercise in craft, Mamet is one of the least playful writer-directors around. It doesn't take long to see that "Heist" is going to proceed by his usual m.o. We're stuck in a series of drab, crummy rooms watching the actors (mostly men) grumble and bitch in Mamet's trademark clipped, profane, back-and-forth dialogue.

For all the surface grit of Mamet-speak it's actually very stylized, owing more to Harold Pinter's pause-fests than to the hard-boiled style it appears to emulate. Much hard-boiled writing is actually quite effusive (and even sentimental). It revels in its own low view of the world. For all the impromptu rages Mamet's dialogue provides actors, his approach is to suck everything dry, to reduce everyone to their basest motives but remove their pleasure in their own duplicity. The crooks here don't want to work for a living, but their planning and wiles seem as joyless as any grind of a job. Mamet clearly doesn't intend "Heist" to be one of his worm's-eye views of the human condition, as "American Buffalo" and "Glengarry Glen Ross" were. But I think the key to his being taken so seriously lies precisely in the fact that he brings what's essentially a genre movie the same po-faced glumness. Audiences or critics who would feel as if they were slumming were they to go to a genre movie or pick up a crime novel can go to "Heist" and feel there's something serious and worthy going on.

In his screenplays for "The Postman Always Rings Twice," "We're No Angels" and "The Untouchables," Mamet has attempted to blow up old-movie clichés to the level of archetypes. "Heist" is awash in clichés: the aging crook looking to make one last score and get out; the hotshot newcomer who sends a gang's relationships into a tailspin; the femme fatale whose sexuality acts as a disruptive force; the carefully planned jobs that go suddenly wrong. But his dried-out approach strips the meat from their bones.

You can still watch movies like John Huston's "The Asphalt Jungle" or Stanley Kubrick's "The Killing" and, for all their genre familiarity, feel that there's something vital going on in them, that even the small, crooked dreams of the characters have some human meaning. (I can't imagine anyone watching Sterling Hayden deliver his last line in "The Killing" -- "What's the use?" -- and not feel as if they'd been kicked in the gut.) Cooks reduce stocks to concentrate their flavor; Mamet reduces motivation, characterization and the affection between his characters as if flavoring and color were an intrusion on his pipsqueak view.

Actors love Mamet (as they love Pinter) because the terse, ping-ponging dialogue is keyed into actors' rhythms. He's not, like Pinter, so vague that actors and audiences can read all sorts of meanings into the menacing, portentous atmosphere. Mamet writes to achieve a rhythm that can fool you into thinking you're seeing the characters open up and connect with each other. What's really going on is more like the exercises actors do in classes or rehearsals -- they toss the lines back and forth like riffs, establishing a tempo and then tossing each other variations.

It's a drag to watch most of the good actors in "Heist" forced into a gap where their personalities are canceled out. Sam Rockwell brings some scummy energy, and Ricky Jay (who provides the only warmth in the movie) gets off a line about why he doesn't like the Swiss that highlights Mamet's talent for loopy, obscene humor. It's somewhat fascinating to watch Gene Hackman. It's a crummy role, but in a way it tells you exactly why he's such a great actor. Hackman has always taken a low-key, lived-in approach to his roles, disappearing inside them. Faced with Mamet's minimalism, he does whatever he can to season the part, sometimes with no more than a smile or an inflection. He works overtime to flesh out his character.

"Heist" is the sort of minor picture that, a couple of hours later, can make you forget you've seen a movie. But there's something offensive about how Mamet continues to win praise as a serious filmmaker with such a joyless picture, a picture that -- intentionally -- gives the audience so little.

Especially if you've been lucky enough to see Richard Kelly's remarkable debut "Donnie Darko," which is currently struggling for its life on a few screens. "Donnie Darko" is flawed, but there's not a scene that doesn't communicate the 26-year-old Kelly's joy at working in movies, his desire to convey his vision, his willingness to go his own strange route and take audiences with him on the journey. He's a rarity, an avant-gardist who's also an inclusionist. He wants to reach an audience, and it's easy to look at "Donnie Darko" and think that one day he'll make great movies. Mamet isn't a hack, but in some ways he's worse. Hacks at least want to deliver the goods. Mamet dutifully works his pathetically narrow patch of dry land as if it were some sign of integrity. If his sensibility were any punier, you'd need a microscope to see it.