In "The Man Who Wasn't There" it's mostly the great Frances McDormand who isn't there. 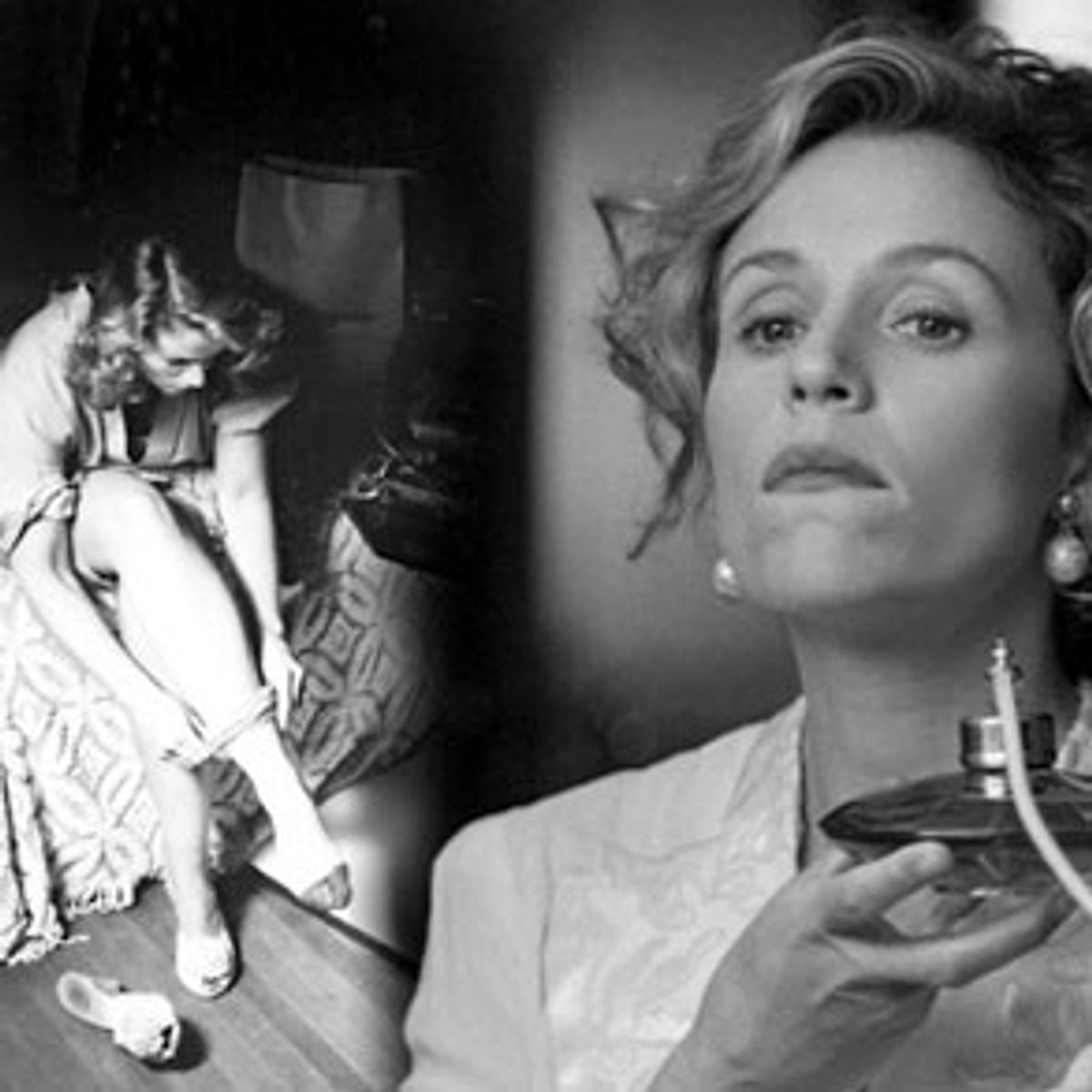 As men go through this vale of sorrows, there's a lot of things we have to adjust to. Like living with the knowledge that Frances McDormand is married to Joel Coen of the Coen brothers. And, more or less, I've come to accept it, so long as they keep putting her in their films, and give the rest of us a chance to watch her. But I draw the line at "The Man Who Wasnt There." There's altogether far too much that isn't there, including enough of Mrs. Coen.

As it happens, even though I did my best to avoid advanced knowledge of the film, I had gathered somehow that there was a scene in which her husband in the picture, played by Billy Bob Thornton, shaved her legs.

"Better not be late," I murmured to my wife, resisting the temptation to drag her out of the house.

"What's the matter?" she wanted to know. "Afraid you'll miss the leg-shaving?"

Well, I shrugged that off with some witticism she couldn't catch. No one likes to be pinned down out of nowhere like that. And I just said, "Those Coens, they draw a crowd," in a pretty blasé manner.

"Oh sure," she said. How is it that she can do a line like that just as tart and don't-kid-me-buster as McDormand herself?

Well, it was Sunday afternoon, with the rain falling down and there was a line at the Bridge Theater going way round the block.

But she said I was the hopeless one, and we did get in, right in the front row. "You'll have the leg in your lap," she said.

Well, I was worried early on by the way every shot in the film was so beautiful that it took you two or three seconds after a cut to get back in the story. I mean, it's not enough that Joel Coen is married to Frances McDormand. He also has to let you know that maybe he has the best eye for black-and-white lighting since John Alton. Instead of getting on with the story.

And then, here was the real trouble, there was a shot of McDormand in her underwear that left you with the clear feeling that this woman hadn't been to the gym enough lately. I mean, she was never razor thin, and she's had a baby recently (and I hope everyone will be happy, really), but if you ask me there's a lot of hostility in that shot. I was also getting the feeling that the film was far too deeply set in its own passive resistance, letting Billy Bob take so long over everything he says, and letting him smoke a cigarette in such a way you knew he had no emotional energy left for sex.

You see, I feel it's part of the implicit bargain the Coens have with us that, since they have Ms. McDormand (and not many other directors get to use her), they're going to let her and us have fun.

Anyway, to get to the leg-shaving scene, it's like too much of the film -- its not really there. Theres a close-up of the legs -- as white as big codfish -- and you hear the scraping of the razor. But theres no sensuality to it. No sense of sexual power or humiliation, or that the husband never gets closer to her than when he's shaving her legs. Not that we ever see Frances having any fun with James Gandolfini, the guy shes having an affair with, either. She gets pregnant, but you dont see that. She ... well, I wont spoil it for you, but you dont see that either. You just hear Billy Bobs draggy voice telling you about it.

Frances McDormand has more mischief in her than any handful of other actresses. She begs to be used, to be given funny lines and lots to do. Whereas the Billy Bob character seems to be saying to the camera and the picture, could you please leave me alone, and just get off me? This very dull guy gets to be the heart and voice of the picture, and Frances -- so full of life and spark -- is all the time being edged off and away.

As I said, there was a packed house when I saw "The Man Who Wasnt There," but at the end of the show it was quiet and people shuffled out like at the end of the funeral. It may be a very witty film, with this cool noir look. But I think its pretty boring and far too cold. Theres times with the Coen brothers when I reckon theyd be better off without each other to giggle with at how clever theyre being. And if they've got Frances and a bath of hot water ... well, there are those of us who could do a lot better.