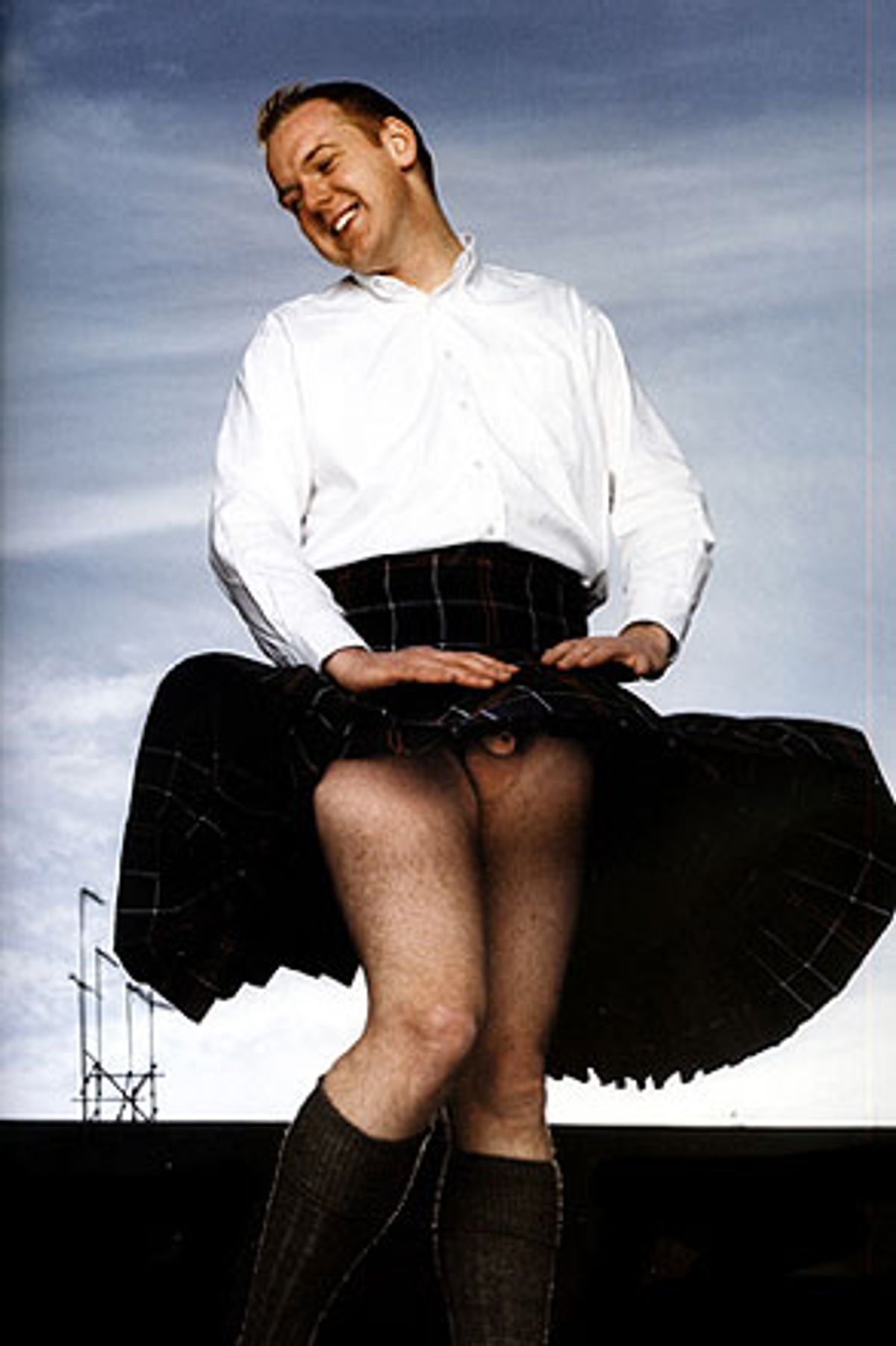 Naked men are a problem for the singularly named British fashion photographer Rankin. As a picture taker better known for his images of more physically compact, socially acceptable female bodies, he needed to face some personal taboos before he could come to any sense of formal artistic resolution. "It took me some time to actually appreciate the male body, to stop being scared of dicks," Rankin recounts in the preface to his entertaining new book, "Male Nudes."

Perhaps this collection of irreverent full-frontal snaps of buck-nekkid men of most ages and shapes (if not ethnicities) might then be dubbed "How I learned to stop worrying and love the penis."

Rankin, creative director of ultra-hip Dazed and Confused magazine, seems to have faced a timeless dilemma. Throughout art history, any artist who has depicted the male form, lingering on his body, has been branded with some kind of sexual label. Male artists are presumed to be gay, female artists unacceptably lusty. Rankin quickly makes his persuasion clear when he writes that he became a photographer to meet girls.

Its amazing to realize that in this day and age the general, that is, heterosexual, public still has issues with taking unashamed looks at a fully naked guy. If nude women are acceptable artistic subjects because of their cultural profile and more curvaceous and contained physicality, the man problem relates to the hegemonic social position of the male. Power dynamics irrevocably shift once the penis is exposed. Physical power, the cachet of a big one, often overcomes social and economic power. Size still matters.

Rankin's solution is to take the piss out of the problem. His male nudes are collaborations -- he asks the guys to formulate their own poses based on their fantasies of being depicted in the buff. The naked men in his oversized book of color and black-and-white portraits were recruited through a classified ad in Time Out, the London edition.

Of course, ads like this bring out those with exhibitionistic leanings or adventurous streaks, as seems to be the case with most of the guys here. The subjects, mostly unknowns, cover a gamut of body types if not ages. (Being a British project, most of the guys are uncut -- if that sort of thing means anything to you.)

The guys with traditionally buff, six-pack-ab bods strike the dour, expected poses that the narcissism of their gym forays allows. But the more ordinary blokes show their stuff creatively and with a greater sense of humor. One of the most endearing pictures in the book is a color shot of a beatifically smiling gent in white button-down shirt and a kilt. His male skirt billows up, a la Marilyn in the "Seven Year Itch," to reveal his hairy legs and a peek at his taut, round cock and balls. It's a sweet picture that rolls together national pride (the subject, a designer named Alex, is Scottish), pop cultural reference to a blonde bombshell, and even a hint of acceptable cross-dressing.

An edgier form of drag occurs in a dusky image of a pasty man -- a noted jazz pianist, it turns out -- nude save for black stockings and gloves and a long bleached-blond wig. It's an image that traffics in dark, dour glamour, in a pervy, oh-so-British way.

Some of the portraits goodheartedly express typical profiles in machismo. One guy holds a magnifying glass to his genitals, while another with a tanned, trim torso places an unfurled measuring tape next to a well-groomed six-inch member. The snap attests to garden-variety male vanity and bravado, as does a portrait of Ose, a handsome black man with a shaved head, posing with a power tool wielded like a gun in front of his own hardware.

That boastful idea is more perversely expressed in a shot of a pink, pouchy penis mounted on a wall trophy, with little trident-like plaques ready to be engraved with the names of sexual conquests. It's a creepy picture in its suggestion of castration, while at the same time it shows just how odd-looking a penis can be. This one resembles a plucked mutant game hen.

Nine middle-aged guys, culled from a casting agency call, in a group shot look like stately men's club members who happen to be naked, posing on a brocade-covered bed. They have hairy bodies, barrel chests, paunches, balding heads, and salt-and-pepper facial hair. One of the participants remarks in notes: "I agreed to be shot as nature made me just to show how mistakes are made." These guys have accepted those flaws, as they all smile heartily. Like the bulk of the pictures in the book, this one doesn't feel the slightest bit perverse.

A few pictures, however, point to the delectability of a dick. In one, an uncut cock is cradled in a hot dog bun, a squeeze of ketchup leading up to a tangle of black pubic hair. Ready to eat. Here Rankin truly seems to have conquered his fears as he renders the once- fearful dick in a form as ordinary as an Oscar Meyer wiener.