A grandchild of the '60s recalls a bedtime story about the bull-goose Prankster that echoes through her family to this day. 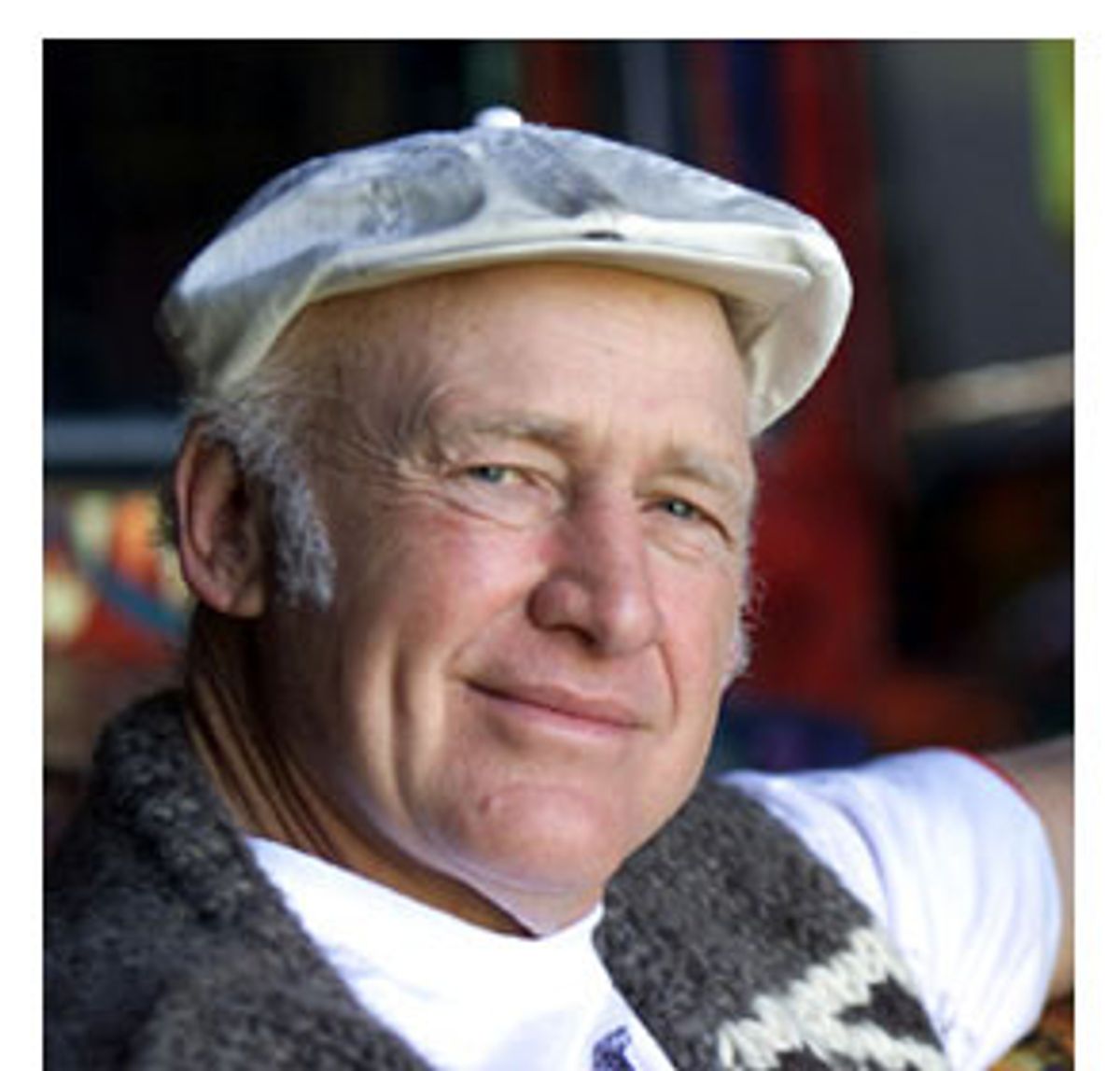 Although I'm not of the generation that you'd expect to be affected by the death of a '60s icon, Ken Kesey had -- no, still has -- a special relationship to my family. When I was a kid, my dad, Henry, talked about Bob Dylan and Timothy Leary like they'd been our next-door neighbors for years, always forgetting that my younger brother Ethan and I weren't born until the late 1970s. Our favorite bedtime story was always "The Time Dad Called Ken Kesey." He was stoned at the time -- my dad, that is -- and he saw Kesey's name in the "Whole Earth Catalog" and gave him a call. And although Kesey was already a celebrity by then, he was kind enough to give dad a few words of advice.

"Well," Dad laughs when I ask him about it, "it's hard to remember what's stoned and what's not stoned. It's not that I was stoned a lot in those days. Compared to everybody else, I was stoned hardly at all, but anyway there was one section in the 'Catalog' that was a handwritten note by Kesey, and I was totally convinced that it said 'Henry' right in the middle. This was a message specifically to me. I was sure that he had cooked up this very complicated plan of getting it published in the 'Whole Earth Catalog,' knowing that I'd read it, and presto, you know, I would get it. I mean it is a little crazy. I knew Kesey lived in Springfield, Ore., so I got the number and called him up.

"His wife, Faye, answered the phone. And I said, 'Hello, is Ken there? This is Henry.'

"'Henry. Tell him I got his message.'

"So she got off the phone, and Kesey got on.

"'The one in the "Whole Earth Catalog," remember?'

"And we both got out the 'Catalog,' and looked at the same page, and then I read it to him, and as I was reading it I realized the word that I thought was 'Henry,' was 'learn.' It was handwritten, sort of scratched. You know, it looked like it could have been 'Henry' if you were slightly stoned.

"I said, 'Oops!' and I was kind of embarrassed, and he said, 'Nahh, don't worry about it. The exact same thing happened to me with William Burroughs!'"

My young father then felt himself to be but a pebble in the tide of counterculture history, kin with the hippies and descendant of beatniks, and this kept him going satisfactorily for the next 20 years or so. The story also has a moral of sorts, in which Kesey imparts to my father some famous advice. When telling the story, however, Dad always seemed to forget this. Maybe it was the drugs. But I never forgot, and I always had to prompt him.

"Did he have anything else to say; did he give you any advice or anything?" I'd ask pointedly.

"Keep moving?" I'd say when I couldn't stand it anymore.

"How come I remember this and nobody else does?"

"My memory's getting bad: A lot of the '60s information's gonna be lost to history," says dad cheerfully.

Now, fast-forward 20 years in my family's history. My dad, in spite of himself, has settled down a bit. But he has managed to pass his free spirit on to my brother Ethan, just as Kesey inherited the wild and curious spirit of William Burroughs, among others. I saw the appeal of the Kesey story as a fable, but Ethan came to totally embody the phrase "Keep moving". He was always the kid who talked to strangers wherever he could find them, and refused to go to bed at a reasonable hour. All his teachers described him as "hyperactive." By the time he was 18, Ethan had been to Thailand and the Bahamas and had crossed the U.S. by motorcycle. But the Kesey legacy of carefree, Prankster-style life can also have a darker edge. Kesey's the man, after all, who may be best known for a variety of seemingly crazy exploits and his first novel, "One Flew Over the Cuckoo's Nest." And, two decades on, that's where my brother Ethan has taken the family mantra "Keep moving."

All alone on the waters of Bristol Bay, Alaska, Ethan is trying to find work fishing for king salmon. On a flat-bottomed steel boat, the most comfortable place to sleep is standing up on deck, even when it rains, and the summer nights are bright as day. He has very little money, and the fishing season is getting worse. His captain has a mandatory 48-hour stay ashore, and my brother takes the time to check himself into a hospital for a painful shoulder. Turns out his arm has popped out of the socket from weeks of hauling nets. The doctors tell him to rest for two weeks. But he's afraid the salmon will rush on without him and he turns around and leaves the hospital the next day. Has to keep moving.

By this time the only boats still in the harbor are the ones belonging to the losers, the captains nobody else wants to fish for. Ethan immediately gets a job for one of these guys, and lasts one day before he asks the second captain to bring him ashore because they "don't communicate well." The next thing we hear is from the sheriff of the village of Naknek, who sees Ethan walking on the roof of a salmon cannery in the middle of the fully lit night. The sheriff pursues him, but Ethan eludes capture. My little brother is now a fugitive from justice. A young woman taxi driver, who doesn't know what she's getting into, happens by. She sees Ethan and pulls over. He opens the car door. Then he shuts the door. Then opens the door. Then shuts the door. The driver, whose name is Krista, says

"Do you know where you're going?"

And my brother gamely answers, "I'm in a movie with Ken Kesey."

Krista promptly delivers him to the police, who drive him to King Salmon, the next town over, where they have a jail cell. Angry at being reined in, Ethan smashes the full weight of his body against the cell's door in an attempt to get out, which to the police looks like a misguided suicide attempt. But to my brother it's a plea for help from a higher authority.

"Well, first I started punching the light," Ethan tells me, remembering the night. "The overhead light had Plexiglas on it. It was actually in the corner, I was standing on the bunk, and I wrapped my shirt up in my fist and I punched, real hard. I liked the noise so I punched some more. Then out came Allen, the police chief, who looked like Ken Kesey. And when he came out I said, 'Ken Kesey, I need a jailbreak,' and he said, 'Well, OK, here I am.'

"He came out, and he unlocked me and let me out and then they were, like, 'Well, what do we do with him?'

"I kinda heard these voices but there was a couple minutes gap there. Then I see there are people marching by outside and I envisioned that there was a huge crowd of people there to see me. So whatever the police guy said, it really made me think, Oh, right, this is Ken Kesey. I figured it out. All the people came to Alaska for the fishing season. You know, it's a crazy place and here I am."

The next day, the authorities fly Ethan to the Alaska Psychiatric Institute in Anchorage, and he's convinced that all this is still part of the movie, the movie he's in with Ken Kesey. On the phone he tells my parents that it's very undercover, although a couple of Hollywood people are in on it, but it's a documentary so we can't spoil the cover. My mother and father fly to Alaska -- together for the first time in five years -- to be at Ethan's bedside. They want him home: He wants to fish. The doctors give him anti-psychotics to slow down the speeding dopamine in his synapses and make him sleep. In the meantime they work on the hard part: getting him to want to come home. Yes, he wants to go home, he says, but his real, "spiritual" home is Bristol Bay, Alaska. It's beautiful and quiet there, not like the hospital, and he has to go back because he's the only white person the Anuk Indians can trust, and there may be a scientific paper in it for him. Plus he's worried Kesey will be disappointed in him, since he was the first draft pick for the film and all.

No one ever came up with an official explanation for my brother's breakdown, but hard labor, no sleep and little food can cause all kinds of delusions.

Perhaps it's unfair to attach all this significance to a novelist who just happened to be one of the first people to drop acid. But still: The Prankster's bus was called Furthur. As is the way of fathers and sons, my brother took my father's admiration of Kesey further than Dad ever did, further than he should have gone. The words -- recounted in years of bedtime stories -- took on a life entirely separate from Kesey the man. An offhand piece of advice to my father became a lifetime motto for my brother, perfect in its vagueness. Adventure without responsibility, call of the wild, an overdose of testosterone. But the motto didn't have the same effect on me; while talking with my parents on conference calls from the psychiatric ward in Anchorage, I desperately hoped whatever had snapped in my brother could be mended if I just sat still.

I wonder whether Kesey, if he had the chance, would have told my brother the same thing he told my dad on that long ago phone call. I think that he might have done what my dad did, reach out to Ethan and silently hold him close.

Today, Ethan is doing perfectly well two years after his time in the cuckoo's nest. He's at school and not planning on going back to Alaska anytime soon. But he hasn't stopped moving: He's spent the past year working on boats in Trinidad and teaching English in Central Asia. And he's helped my family see all the dimensions of Kesey's simple direction.

"Keep moving" means to keep pushing the edges of your experience. But it also requires the strength and wisdom to pull yourself back. I like to think my family has satisfied Kesey's advice. It is that strength and calm sense of adventure that his words taught us. So, as a blessing for a man I never met, I'd like to say: Thank you, for keeping us moving, and for bringing us back. I hope the end of your journey was a peaceful one, not even an end really, just moving further down the road.

Brook Wilensky-Lanford lives in New York City, where she's trying to find work as a writer.