Steve Martin and Helena Bonham Carter star in a toothless thriller about a dentist who takes on the wrong patient. 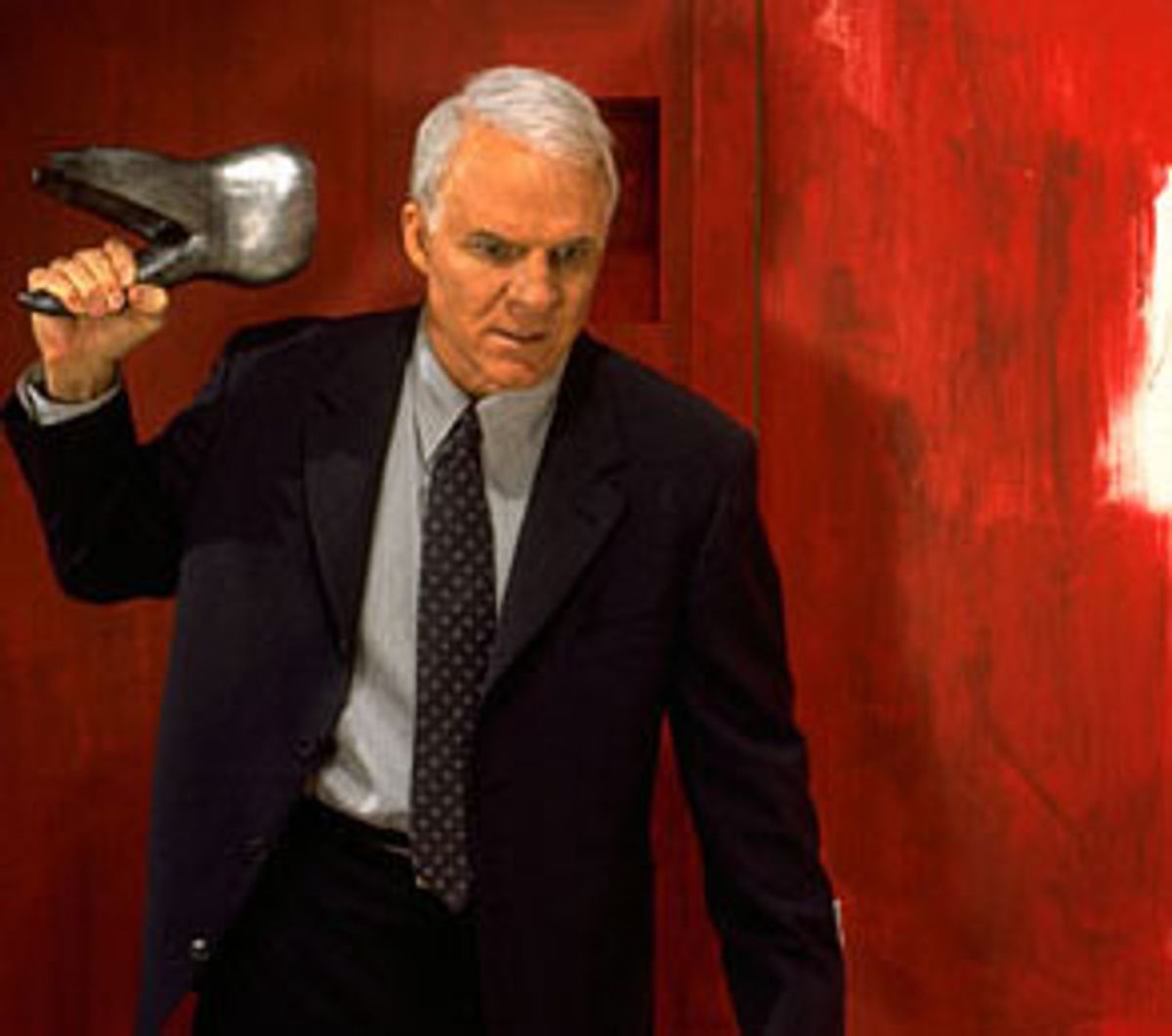 Dentistry isn't the sexiest profession -- there's not much that's erotic about rummaging around in people's mouths all day -- and yet somehow, there's often something sexy about dentists. At first, David Atkins' debut feature "Novocaine," a mod So-Cal noir laced with veins of black comedy, seems poised to take advantage of that forbidden allure. Steve Martin is Dr. Frank Sangster, a spiky but essentially decent fellow who takes pride in his profession. His practice is thriving, and he's happily engaged to his perkily perfect dental hygienist Jean (Laura Dern). But trouble walks through the door in the form of glam urchin Susan (Helena Bonham Carter), a junkie who first cons drugs out of Frank and later seduces him. She doesn't have to work too hard at either: Two or three blinks of her massive Theda Bara eyes and he's ready to do her bidding.

But "Novocaine" is so aggressively stylish that it comes off as little more than a stunt. The opening credits feature X-ray films of people chewing, chattering and swallowing -- they're creepy skeleton folk who are divorced from their own flesh, ghostly maxillas and mandibles grinding away intently at their business. Atkins intercuts similar X-ray footage between scenes, for no apparent reason other than that it simply looks cool.

The plot of "Novocaine" unfolds ploddingly. First, Frank has the DEA on his tail -- he's suspected of selling painkillers on the sly. Then he becomes implicated in a murder. The story trundles forward, accented by Frank's hokey voice-overs. He exposits all over the place, dispensing wise words as if they were colorful freebie toothbrushes: "The worst thing a man can lose is his teeth" and "One small lie and everything unravels from there."

Atkins never finds the right tone for "Novocaine." It's not dark enough to be either viciously funny or unsettling -- the story is simply glossed over with a limp gray wash. The picture has a tentative, ambling, quirky pace that tries to match Martin's timing but only ends up throwing it out of whack -- it's as if Atkins has set two unruly sine waves off in the hope that they'd lock into synch, only to have them bump and wobble disconcertingly against each other.

Martin still comes off as a likable oddball -- he's at least vaguely keyed into the sexy-dentist thing, even if Atkins doesn't know how to make the most of the premise. Bonham Carter, done up in messy punked-out cheerleader pigtails and skimpy lace tops, squints and scowls through her role to the point of cartoonishness. (She was far sexier, and much more touching, as a simian babe in Tim Burton's "Planet of the Apes.")

But somehow, when Laura Dern is on-screen, the movie manages to make temporary peace with itself. As an ambitious and orderly suburbanite, she strikes just the right note: She's the kind of exquisitely coiffed dish who's unafraid to wear head-to-toe pistachio, and the stuffed animals and ceramic pigs that decorate her apartment are lined up just so. Dern plays Jean with the perfect mix of persnicketiness and cleverness, and the movie clacks along efficiently when she's around.