Barbara Olson's bestselling hatchet job on Bill and Hillary Clinton is a shameful coda to a life that ended in bravery. 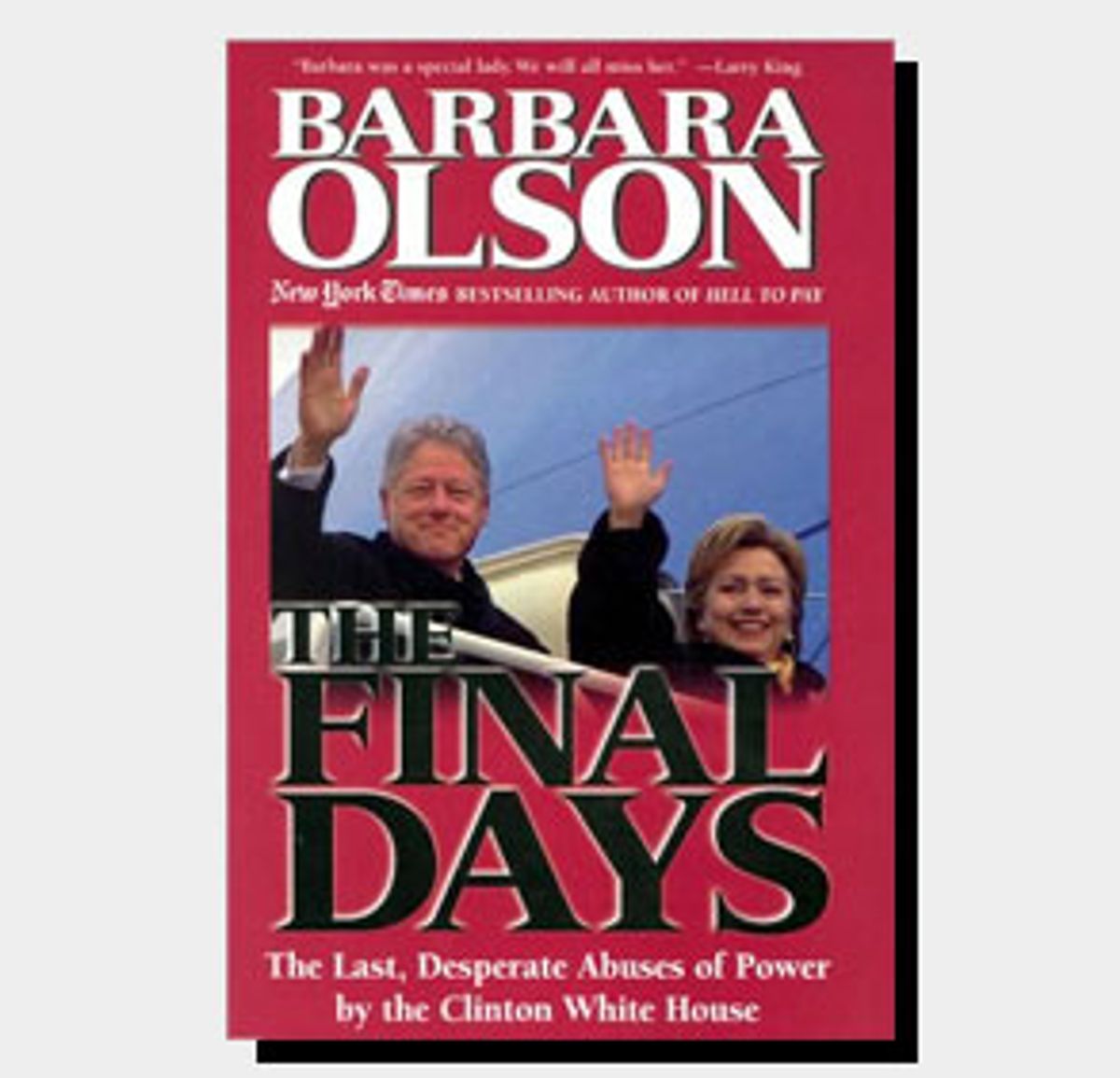 It's tough reading a new book by a recently deceased author, particularly one, like Barbara Olson, who has quite understandably become a tragic hero in the eyes of many. Olson was among the passengers of American Airlines Flight 77, which was hijacked and flown into the Pentagon on Sept. 11. Before the crash, she managed to call her husband, Solicitor General Ted Olson, twice on her cellphone, relaying bits of information about the hijacking -- it was from Olson that the world first learned about the use of "box cutters" as a weapon -- and asking his advice, he later recalled on "Larry King Live," about "what she should tell the pilot."

It's an unimaginable situation. And simply because of the way she kept her wits about her, Olson deserves to be honored for her ability to tough it out the best she could, making virtually the only record we have of what happened on that particular doomed ride.

It's not a huge surprise, of course, that Olson was tough. Anyone who had seen her on TV talk shows was quickly initiated to her partisan, take-no-prisoners style. Earlier in the year, she was a fixture on "Larry King Live," this summer as a daily critic of the conduct of Rep. Gary Condit. Olson, her intensely blond hair glowing, her teeth gleaming, would sometimes be beamed in from Wisconsin, speaking from what looked like a wood-paneled Moose Lodge's rec room. She'd be incongruously wearing some turtleneck and jacket ensemble as the rest of the country sweated through the summer's dog days.

A picture of Middle American piety, she savored the singular joy of bashing Condit. But she didn't stop there; Olson regularly raised the specter of Bill Clinton, arguing not only that he was somehow Condit's moral progenitor, but that as such he was also, somehow, culpable for the mysterious disappearance of Condit's intern lover, Chandra Levy.

It made for good, cathartic TV, something Olson had perfected for years after emerging as one of the blondest of the blond Republican warrior women, dominating TV talk in their quest to make Bill Clinton pay for his sins. Olson, a former federal prosecutor, had served as counsel to a congressional committee that looked into some of the earliest Clinton scandals, and she quickly parlayed that into multimedia success. Her book, the bestselling "Hell to Pay: The Unfolding Story of Hillary Rodham Clinton," was a chronicle of everything Hillary Clinton had ever done wrong -- and seemed to have done wrong -- delivered in a bitterly self-righteous tone. In the process, Olson became a major player in the Clinton TV circus, where telegenic partisans from both sides squared off nightly in tournaments of highly theatrical name-calling and the dimmest type of political discourse.

Now, Olson's last book, "Final Days: The Last, Desperate Abuses of Power by the Clinton White House," released just in the month after her tragic death, has made her a posthumous bestselling author. "She had completed the book," explains publisher Alfred S. Regnery in a preface, "and we had completed the editorial and prepublication work on it the week before she died."

"Needless to say, her death presented a difficult dilemma to us. Should we cancel the book, or should we proceed?" Regnery continues. "Would it be unseemly to proceed with the book under the circumstances?" After "agonizing over the decision," he writes, "we decided that the proper thing to do was to proceed." In fact, he concludes, "we decided that we could think of nobody for whom a book like this one would be a more fitting statement, after being murdered by terrorists, than Barbara Olson."

Whatever he could possibly mean by that bizarre last sentence, Regnery was right on his first instinct: "The Final Days" is unseemly. Its topic is one that should be easy fodder for any writer, not just an avowed Clinton foe like Olson. The final months of the Clinton presidency created a blight that bothered many more thoughtful citizens than the Monica Lewinsky scandal ever could, and Olson dutifully hits the highlights -- the shocking pardon of billionaire bad boy Marc Rich; the pardons that were approved against the recommendation of the Department of Justice; the Clintons' failed attempt to move furniture belonging to the White House to their new home in Chappaqua, N.Y.; the astounding $800,000 yearly sticker cost of the offices Clinton wished to inhabit in midtown Manhattan, before he turned tail and embraced more modest digs in Harlem.

But Olson's book is a thin clip job of articles from the time and includes a heavy recycling of the clip jobs she assembled in "Hell to Pay." It's a heavily padded book. After denouncing the 140 pardons and 36 commuted sentences issued by Clinton on his last day in office, she reports that "very few publications printed the full list," but that "it is a story that should be told." So she proceeds to list each name, for a solid two pages. Then, she tells us nothing about any of them except for the ones we already know plenty about.

She also doesn't seem to have taken care to be accurate -- at least not if that threatened to get in the way of being inflammatory. She claims Hillary "took the trouble to register with luxury retailers, as though she were about to become an impoverished new bride." While unsourced, that particular claim was a false one inaccurately derived from a Maureen Dowd column item, something the Hillary-obsessed Olson surely knew. The truth, of course -- that friends of the Clintons were hitting up others to donate gifts for the couple's post-presidential life -- was unsavory enough. Why goose it with something that's not true? And what value is there in a political book that neither unearths any new information, nor can be bothered to get the basic background information right?

But this book was written for people interested in snickering at the Clintons, not for those interested in truth. And Olson joylessly fills the pages with the sort of snide, hackneyed asides that will quickly try even the most partisan of readers. "Although not particularly athletic, William Jefferson Clinton had approached the presidency as a perpetual one-person Olympics." Hugh Rodham, Hillary's overweight brother, "stalked the family palace like a Sumo wrestler" and "formed a symbiotic relationship [with the president], perhaps because both were at heart undisciplined men of large appetites." When Hillary dons a Yankees cap in the early days of her New York Senate bid it "was a bit laughable since Hillary did not seem to know the difference between Yogi Berra and Yogi Bear, Mickey Mantle and Mickey Mouse, or Joe Torre and Mel Torme." When on the road, though, "Hillary campaigned like a trouper. (Not to be compared with her husband's utilization of Arkansas troopers.)" These leaden quips are the highlights.

This is not, regardless of how Regnery justifies it, a proud addition to Olson's legacy. Even Olson's greatest fans would be better off remembering her for her final moments of undeniable bravery. In fact, we all would.