The first female chief of the Cherokee Nation, she took tragedy and illness and made strength. And don't even ask where she got her name. 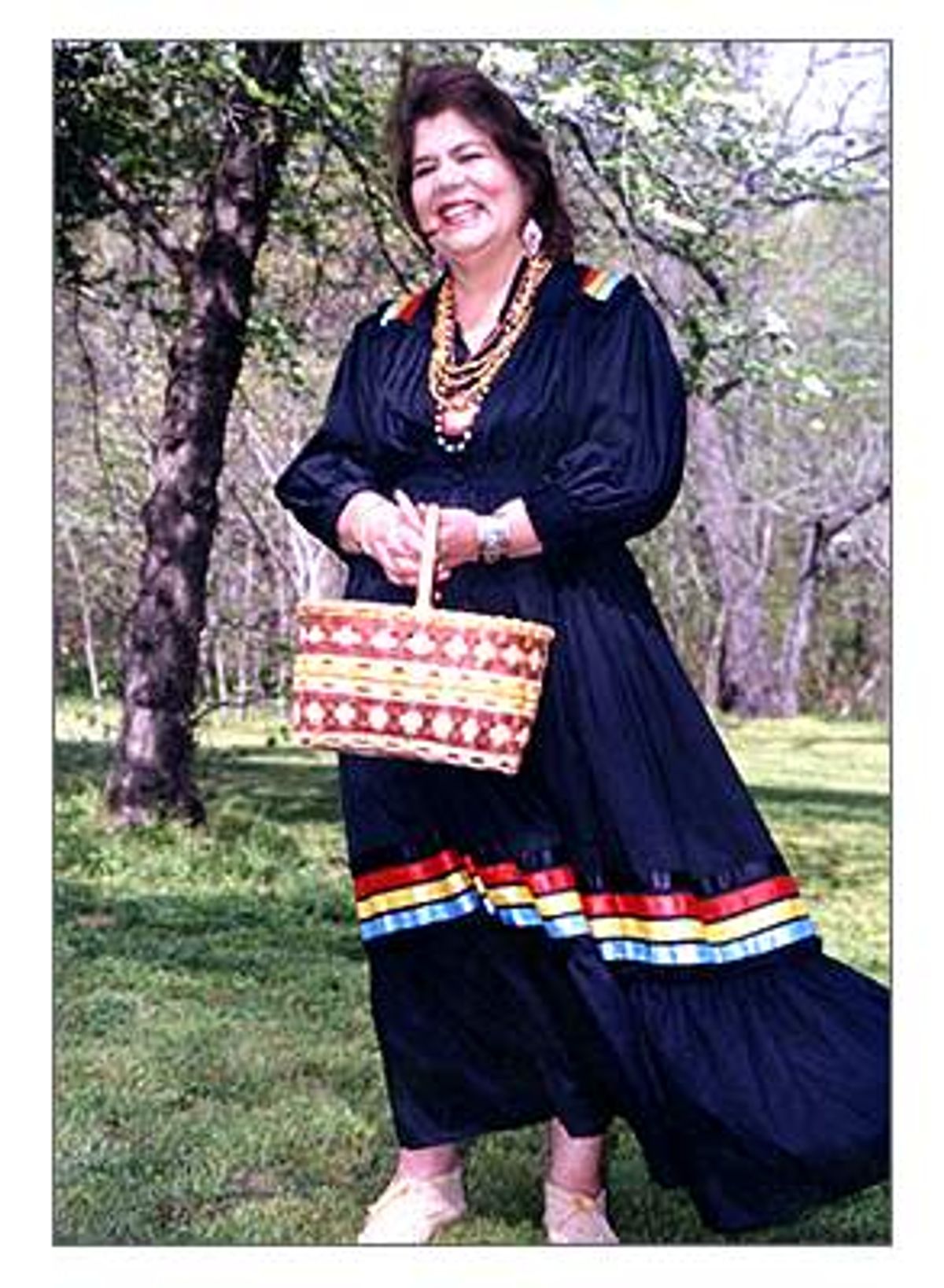 San Francisco transformed many people living there during the 1960s. Its shabby, lunch-pail-toting neighborhoods became crucibles for a society recasting its values. The fire eventually caught a shy housewife and mother in her 20s named Mrs. Hugo Olaya and alchemized her into Wilma Pearl Mankiller, a symbol of both feminism and Native American self-determination.

In 1985 Mankiller, now 57, became the first female chief of the Cherokee Nation, the 220,000-member Native American tribe based in Tahlequah, Okla., to which she belongs. She did it not only by overcoming the usual barriers set against Native Americans, but also by vaulting the chauvinistic hurdles imposed by her fellow Cherokees, who had never been led by a woman.

Once chief, Mankiller took the traditional "women's issues" of education and health care and made them tribal priorities. She raised $20 million to build a much-needed infrastructure for schools and other projects, including an $8 million job-training center. The largest Cherokee health clinic was started under her tenure in Stilwell, Okla., and is now named in her honor. Mankiller also sought to reunite the Eastern Cherokee, a group based in North Carolina, with the larger Western division.

She ruled with grace and humor -- she often teased patronizing Anglos by telling them her surname was due to her reputation; in fact, "Mankiller" is a Cherokee military term for a village protector -- and with organizational smarts learned in the blue-collar neighborhoods of clapboard and "ethnic politics" that circled San Francisco Bay.

Her journey -- from complacency to activism to political power -- followed a familiar boomer flight path, but hers was a working woman's ascendancy. It was born in the rural grit of Adair County, Okla., and the tough industrial neighborhood of San Francisco's Hunters Point. Elite, tree-shaded suburbs like Pasadena or Grosse Pointe that shaped so many '60s radicals couldn't have been more remote to Mankiller.

Mankiller grew up on her father Charley's ancestral Oklahoma lands. "Dirt poor" was how she described her early life. The Mankillers frequently ate suppers of squirrel and other game. The house had no electricity. Her parents used coal oil for illumination.

In 1956 Charley Mankiller, eager to provide a better life for his growing family, moved them from Oklahoma to California as part of a Bureau of Indian Affairs (BIA) program, initiated by the same bureaucrats who had "relocated" Japanese-Americans during World War II. The program, a misguided experiment in social engineering, transplanted rural Native Americans to jobs in industrial cities, thus serving to weaken reservation ties and diffuse the little political clout the tribes held. It was another insult in a history of them stretching back two centuries.

In 1838 the Cherokee Nation was ripped from its ancestral homelands in the Carolinas, Tennessee and Georgia by U.S. Army troops acting under orders from the federal government. The forced march to the Oklahoma reservations, the famous "Trail of Tears," killed thousands of men, women and children. Buffeted by white assaults -- both physical and legal -- the Cherokees would spend more than 100 years as wards of the state. It wasn't until 1970 that Washington allowed the tribe to elect its leaders directly.

Wilma was 11 when the Mankillers arrived in San Francisco. Charley found work as a rope maker and the family settled down. Wilma had a difficult transition. She and her siblings were the proverbial hicks in the big city. A kindly Mexican family showed them how to work a telephone and taught Wilma to roller skate. Charley Mankiller had instilled in his children a pride in their heritage, and San Francisco's Indian Center, located in the Mission District, fostered it. The center became Wilma's after-school refuge. The city's diversity exposed her to other things. In high school, African-American girlfriends influenced Mankiller's taste in popular culture. While white girls swooned over Fabian and Elvis, Mankiller absorbed Etta James and B.B. King. Life in a poor black neighborhood, Mankiller told a Sweet Briar College audience in 1993, taught her other valuable lessons.

"What I learned from my experience in living in a community of almost all African-American people," she said, "is that poor people have a much, much greater capacity for solving their own problems than most people give them credit for."

Mankiller exhibited no appetite for intellectual ambition as a teenager. In her 1993 autobiography, "Mankiller: A Chief and Her People," co-written with Michael Wallis, she recalled hating the classroom. When she graduated from high school in June 1963, she expected that to be the end of formal schooling.

"There were never plans for me to go to college," she said. "That thought never even entered my head."

Instead, a tedious pink-collar job followed graduation, as did a fast courtship and marriage to a handsome Ecuadorean college student, Hugo Olaya, with whom Mankiller had two children. Olaya's family was middle-class; his prospects were good. At 17 the pretty girl, whose dark, flashing eyes gave her a resemblance to actress Natalie Wood, settled down to live the life of a California hausfrau -- replete with psychedelic pantsuits, baby strollers and European vacations.

The social protests of the '60s didn't touch Mankiller directly until the decade's last days. On Nov. 9, 1969, 19 Native Americans made their way out to Alcatraz island, the abandoned federal prison in the middle of San Francisco Bay. The hunk of sandstone, in full view of San Francisco's corporate skyline, was supposed to be handed over to Texas oil tycoon Lamar Hunt and turned into a futuristic shopping mall and revolving restaurant. Instead, the 19 Native Americans claimed the island "in the name of Indians of All Tribes," transforming it into a symbol of Native American liberation.

Led by Mohawk tribesman Richard Oakes and Adam Nordwell, a Minnesota Chippewa, the protesters carried what they considered a fair price for the island: $24 worth of glass beads and red cloth. The beads and cloth were comparable to the ones the Europeans had used to buy Manhattan, but the federal government declined their offer. Coast Guard patrols escorted the protesters back to the mainland.

On Nov. 20 the protesters, now numbering 89, returned for another occupation of the island. This time they stayed 19 months. The rebellion soon bore all the trappings of a media circus. TV news crews hired speedboats to get close to the action, while tourists snapped photos from tour liners. Politicians dropped by. Jane Fonda and Anthony Quinn vowed solidarity. Candice Bergen showed up with a sleeping bag and crashed on the floor.

Mankiller didn't come to Alcatraz in those first two waves, and her siblings Richard, James and Vanessa got there ahead of her. She had stayed in the background, but when she finally arrived, Alcatraz became a pivotal point in her life. While she had been conscious of Native American issues before that time, these protests "flashed like bright comets."

"Every day that passed seemed to give me more self-respect and sense of pride," she wrote.

Pop culture discovered Native American issues around then, too, and glommed onto Red Pride. Dustin Hoffman played the Cheyenne-raised hero in Arthur Penn's film "Little Big Man," released in 1970. Soon after, Cherokee injustices made the Top 40 with the Paul Revere and the Raiders' hit "Indian Reservation." Meanwhile, Mankiller found herself spending time at the Indian Center helping with fundraising and organizational efforts. She became acting director of East Oakland's Native American Youth Center.

Soon Mankiller's expanding idea of herself (she was now taking college classes in social work) clashed with the more traditional family her husband envisioned. He forbade her to buy a car; she got a little red Mazda with a stick shift and drove to tribal meetings all over the West Coast. Mankiller's favorite song now, and the one she liked to dance to with her daughters, was Aretha Franklin's "Respect."

She and Olaya divorced in 1974. Mankiller found a job as an Oakland social worker. When she decided to return to Oklahoma with her daughters, she left California in a U-Haul with $20 in her pocket.

Mankiller soon found a position as a community coordinator in the Cherokee tribal headquarters. The tribe was beginning to operate with less dependence on the BIA. Reforming the BIA, observed one Creek chief, was like rotating four bald tires on a car: Nothing changed. There were other ways to wrest money from the government. Mankiller, now finishing her degree at the University of Arkansas, became adept in the art of organizing as well as grant and proposal writing. She was proving to be a formidable leader.

In 1979 a head-on car crash seriously injured Mankiller and killed the other driver. By awful coincidence that driver was Sherry Morris, one of Mankiller's best friends. Mankiller spent the next year in rehab wracked with physical pain and guilt. Then, in November 1980, she was diagnosed with the neuromuscular disease myasthenia gravis. An operation to remove her thymus cured her of the illness and she returned to her job in January 1981 to supervise the rejuvenation of the Cherokee town of Bell, Okla. The job involved urban planning and constructing a 16-mile water pipeline, and Mankiller excelled at it. She also met her second husband, Charlie Soap. They married in 1986.

Just three years before, ruling Cherokee Chief Ross Swimmer had asked Mankiller to run as his deputy in the next tribal election. After much debate she accepted and was promptly criticized -- not for her liberal Democratic politics but for her gender. Mankiller described herself as "stunned" by the hostility. Charley Mankiller's daughter toughened her hide.

"I expected my politics to be the issue," she said later. "They weren't. The issue was my being a woman, and I wouldn't have it. I simply told myself that it was a foolish issue, and I wouldn't argue with a fool."

Swimmer and Mankiller won the election. Ironically, it was Ronald Reagan, whose policies Mankiller opposed, who gave her the opportunity to become Cherokee chief when he appointed Swimmer head of the BIA in September 1985. Succeeding him, Mankiller served as chief for the next 10 years -- winning her second term with 82 percent of the vote.

As chief, Mankiller oversaw a historic self-determination agreement, making the Cherokee Nation one of six tribes to assume responsibility for BIA funds formerly spent by the bureau. She oversaw an annual budget of more than $75 million and more than 1,200 employees. Much of her focus was on developing adequate health care for her tribe. Ms. Magazine named her 1987's "Woman of the Year." She was becoming a national figure, hobnobbing with Bill Clinton and other leaders.

"People are always enormously disappointed when they meet me," she said, "because I'm not handing out crystals or am not laden with Native American jewelry."

In 1995 Mankiller was diagnosed with lymphoma -- it's now in remission -- and did not seek another term. Joe Byrd was elected chief. His administration soon derailed over bitter tribal constitutional controversies. In 1999 Chad Smith, a legal scholar Mankiller endorsed, became chief and the political infighting abated.

Mankiller has remained in the public eye. In 1995 she received a Chubb Fellowship from Yale University, and in 1998 President Clinton presented her with the Presidential Medal of Freedom.

Illness continues to plague her. In 1990 and 1998 Mankiller underwent two kidney transplants, and in 1999 she was diagnosed with breast cancer. But she still lectures and stays active in the issues that have shaped so much of her life.

"If we're ever going to collectively begin to grapple with the problems that we have collectively," Mankiller has said, "we're going to have to move back the veil and deal with each other on a more human level."

With the courage to sweep old restrictions aside, Mankiller continues to be a warrior not just for the Cherokee but for humanity itself.