Studs Terkel: "We are not the Fortress America"

The indefatigable author talks about his new book on death, the war against terror, President Bush, FDR and Thomas Paine. 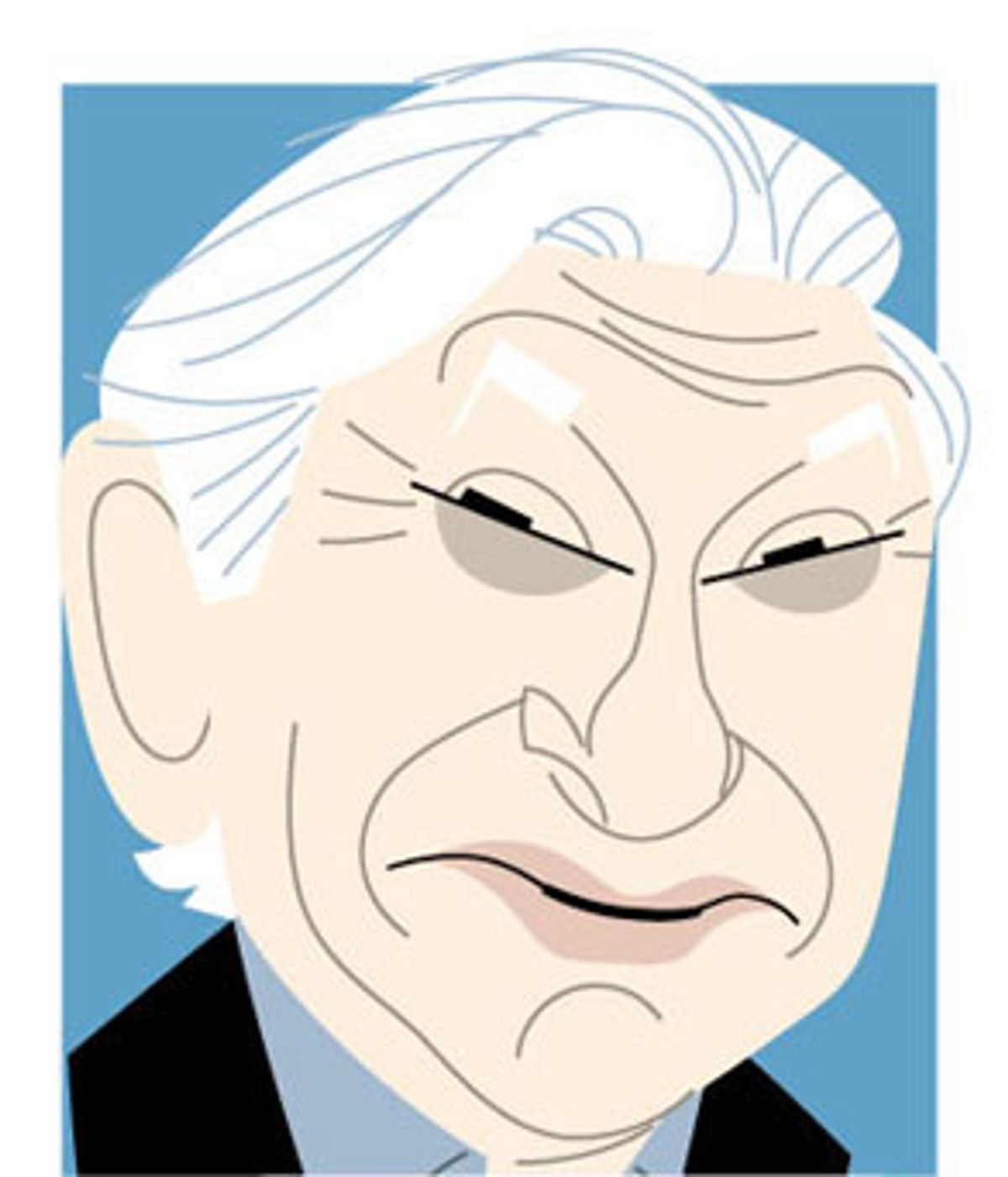 The career of Studs Terkel, 89, has spanned six decades. He has interviewed thousands of people and written 11 collections of oral histories, including "Working" and the Pulitzer Prize-winning "The Good War," published in 1984.

Terkel's latest book is "Will the Circle Be Unbroken? Reflections on Death, Rebirth, and Hunger for a Faith." It explores cultural attitudes toward death and collects in one volume more than 60 interviews with ordinary people who share their thoughts on life, death and everything in between. Among his subjects, Terkel interviewed a firefighter, a cardiologist, a death-row parolee, a mortician, a cancer patient in remission, AIDS caseworkers and numerous others.

My mission: to interview the interviewer. With a record like Terkel's, such a proposition could be daunting, but it's not. Hard of hearing, he shouts down the phone in a friendly, wheezy voice, curses his hearing aid, asks me to speak up, to repeat myself, curses his hearing aid again and, at the same time, manages to talk at breakneck speed about anything and everything.

His doorbell could ring any moment, he says. He's expecting someone who wants his autograph. "I'm a half-assed celebrity in town," he jokes. Ironically, Terkel had already started working on "Will the Circle Be Unbroken?" -- meeting and interviewing subjects -- when his wife died. "Well, it's a crazy moment," he says. "Don't call it serendipity, because it's tragic. I lost my wife." Death had come home. Terkel continued to do interviews in the months that followed, and managed to complete the book. He has since begun work on two more book projects.

"Hold the wire," he shouts suddenly when the doorbell finally rings. He reads my phone number back to me loudly, reads it again, excuses himself and hangs up. A little later, he calls back and we have a chance to talk.

Why did you decide to write a book about death?

Death is the one experience none of us has had and all of us will have. As Kurt Vonnegut says in the book, it's the most ordinary thing in the world. At the same time, the book is about life, primarily. It's about life. I always like to do a sotto voce, cup my hand over my mouth and say: It's about l-i-f-e. Life.

In the introduction, you mention that author Gore Vidal suggested that you write a book about death as early as 1970. Why has it taken so long for you to finally approach the subject?

I had a radio show in Chicago for many years, on WFMT, a classical music station. I was its one aberration. It was an eclectic program, and I used to have a lot of people on, writers that I liked. And one of the writers was Gore Vidal. One day at the bar he says, "You ever thought about doing a book about people's thoughts on death?"

I said, "Oh my God." I was having a martini; I looked in the martini glass and all I saw was an olive. I was always told: "A book on death? They don't want to talk about that, you're crazy." But they want to talk about it. They want to. The irony is, it's the most alive book I've ever done.

Religion figures heavily in the responses of many of your subjects.

There's a recurring refrain in the book, you'll spot it: "I'm not religious, I'm spiritual." Now, it sounds like one of those New Age bromides, but it's not. They want no middleman between themselves and God, whatever He, She or It is. And I find that fascinating. I find myself astonished by many of the responses.

Saul Bellow, a fellow octogenarian, once wrote that every man has his own poems.

Reading the oral histories you've collected here, it seems that Bellow was right and that what you've managed to do is capture your subject's poems.

I'm so glad you said that. I'm a gold prospector. I'm digging. Out of that digging comes tons of ore. Thirty pages. A lot of it is fat -- [I'm] cutting the lean from it, getting at the core. Now I've got eight pages. But it's still not a necklace, or a watch, or a gold bracelet. I have to bring it all together, and that's my necklace. Now the editing, that's the delicate part, now I'm a brain surgeon. You spoke of the poem within; I believe we all have it. The key to interviews is listening to the person, even to the silences. This is all parenthetical, you don't mind do you? I'm doing stream of consciousness now. I'm a short Joyce.

You asked many of your subjects if they feared death. Do you fear death?

At this stage in the game, I'm 89 years old, I have two martinis a day, two cigars a day, my wife's gone and my friends are gone too. I've had a good run. However, I'm greedy. So I want to do a couple of books. I probably won't finish them, but it makes the day go quicker. So do I fear death? Not especially.

How did the terrorist attacks of Sept. 11 change our perceptions of death?

Well that's a good question. You see, I'd started the book long before that. Has it changed my perception of life and death, you mean? If anything, it's italicized it. If anything, more than ever, [the Sept. 11 attacks were] a tragic, stupid event, a barbaric event that has made the book even more pertinent than it may have been before. And I find this ironic and tragic at the same time.

How can I put it? What has happened has made us more vulnerable. We are not the Fortress America. I think that's the last thing Thomas Paine had in mind 200 years ago. Following "Common Sense" he wrote "Rights of Man," and in that he spoke of this new society, this open society, and he said it could lift the world, lift it. I'm talking about 1791 he was writing it. He didn't mean for us to be Fortress America. If we are Fortress America, then we are against "Them," whoever "Them" is -- the rest of the world, of course. So suddenly it's happened. We are vulnerable and in this vulnerability, I hope we're more human. You see, to err is human, to be vulnerable is human and so, in a sense, I'm looking now to find something hopeful that's come out of this, ironically enough, that we ourselves may recognize what it is to be "the other."

So you think the attacks should teach us all how to empathize?

Remember Einstein? I still lean on Einstein. I love to quote Einstein because no one dares contradict me. Einstein said shortly before he died, he was so overwhelmed, his own findings led to Hiroshima, subsequently -- the irony -- he tore his hair when he learned about Hiroshima. He never expected [the bomb] to be dropped on human beings, and then he said something along the lines of, "Everything in the world has changed with the split atom except one thing -- the way we think." We have to think anew. If we don't think anew we're in the soup.

And are people now thinking anew?

Remember, all my books have dealt with the extraordinary possibilities of ordinary Americans. And we saw it of course with the tenacity of the firefighters and the cops and the paramedics and everybody. So the ordinary American, I think, senses something deep down, inchoate though the feeling is, that our spokesmen, politicians or whoever they are, don't understand at all.

Will the current campaign -- this long War Against Terrorism we've embarked upon -- become another Vietnam for the United States?

I don't know. I wish to hell I knew because there's no precedent for this. It won't even be Vietnam because Vietnam was a country, where of course we had no business being to begin with. It was an obscene misadventure. Now, there are groups, there are fragments, we know that. Afghanistan is a fragmented land and it's one warlord against another, and even the Northern Alliance, when it comes to human rights, have not been overwhelmingly great. I think we have to have this new move, a whole new Einsteinian approach. I return to him all the time.

Well, we have lost something in the last 50 years. I think the Cold War's aftermath is still around and about. Now, ironically enough, our ally is Russia. Here we go again. Archibald McLeish wrote a wonderful piece during the most frigid parts of the Cold War for Harper's, I think, and he said, "We are enthralled to them," -- the Soviets -- "and they're enthralled to us. No matter what they do, we'll do the opposite. No matter what. And no matter what we do, they'll do the opposite." So I thought of that, and that still hovers even though things have been reversed now. There's Putin and Bush -- buddy-buddies: the irony. But no, it can't be the same. It's different.

How was World War II different from the current campaign against terrorism and the Taliban?

It was a war against Hitler, of course, against fascism, against all there was. It subsequently had to be fought, but you can't compare the two. There is no one country involved now. Not Afghanistan. We know they're warlords, knocking each other off. They're purchasable too and so you can't compare them. There's confusion, there's bewilderment. So at this moment, we're at a crossroads. Will we learn? You see, you always come back to Einstein again. We have to think anew. It's not just Them, a Third World, distant. It's one, whether we like it or not.

Has George W. Bush proven himself as president of the United States?

Oh, no. No. Whom is he helping domestically with the tax cuts? You know very well who tax cuts help. The big CEOs are being rewarded, while thousands are being laid off.

If not George W. Bush, then who?

When it comes to the military and the Pentagon, Gore was as fervent for expanding the military budget as Bush is. So I don't think it would have changed much with Gore, as far as the bombings are concerned. Possibly it might have been different as far as the domestic program is concerned. That might have been the difference. Oh God, I don't know. Would FDR have been the guy? Well, he's my favorite president of course. At the same time we know what he did in the Executive Order 9066 -- Japanese Americans' internment. And that was a big blot, a horrendous blot. But nonetheless, he would have been the closest to it. We need a statesman, a new kind of statesman, and I don't see any on the horizon.

By launching a protracted bombing campaign, have we responded appropriately to the Sept. 11 attacks?

No, no. No bombing campaign. Bombing is the one thing bin Laden was for. He loves the idea of being bombed. It makes him a hero, a martyr among the great many in that whole region of the world.

Now, if in our largesse we said: "This is what we'll do, all over the world, everywhere." Suppose we bomb them all over the world with food, clothing and shelter. I think it would alter us considerably. I know this sounds altruistic, it sounds goofy, it sounds idealistic in a comic way. Yet, it's the way. We'd be the most beloved nation in this epoch. So there you have it. As I say, this guy's a goof, who's talking to you now, an idealist. But on the contrary, that ideal is a reality, that ideal is being realistic. That's the ticket. You got an earful.