Why Daschle and Leahy?

It's the question no one in Washington or the media wants to publicly examine: Why were two high-profile Democrats targeted by the anthrax mail terrorist? 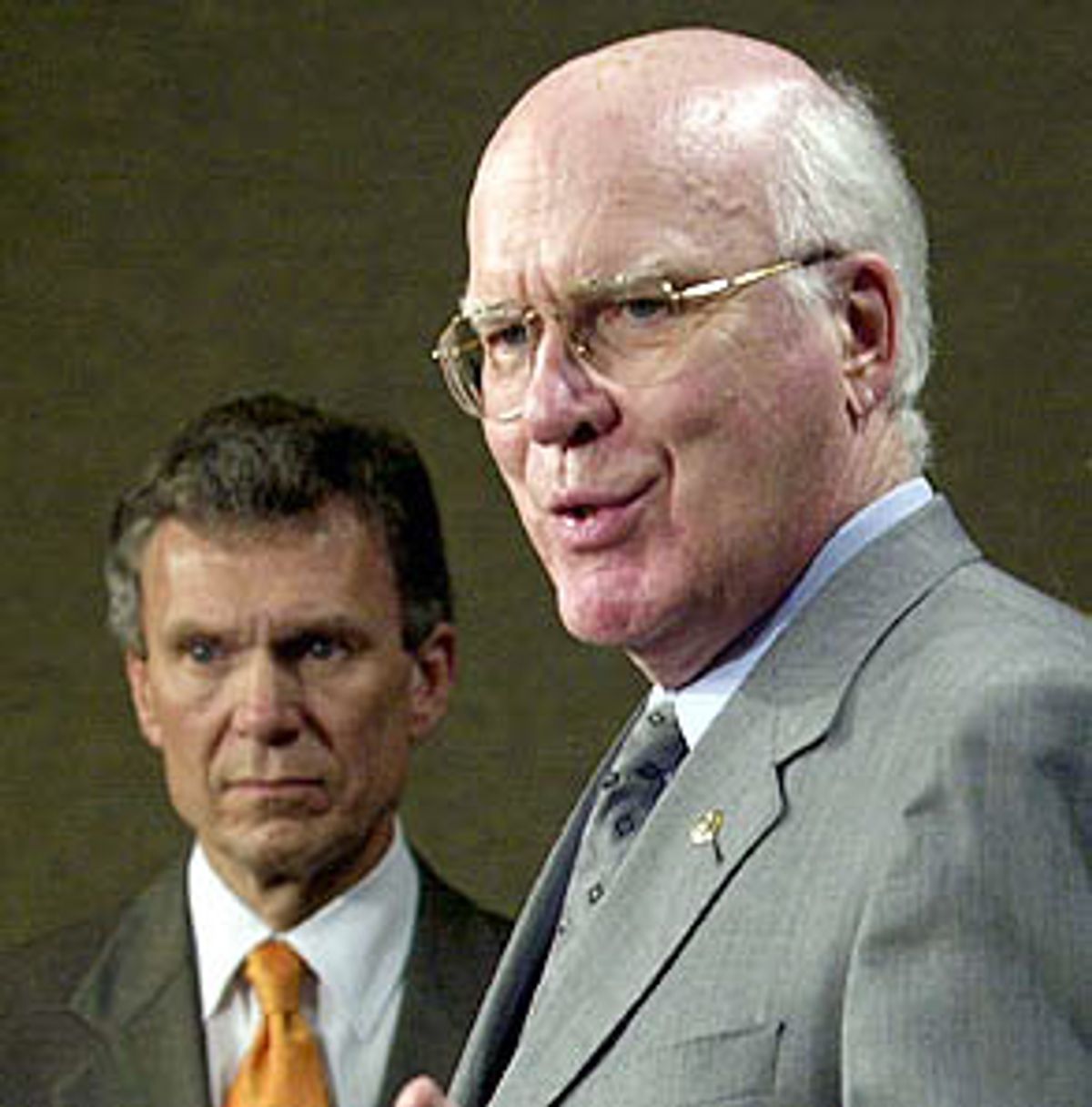 The anthrax story returned to the front pages last week, when it was revealed that another leading Democratic senator was mailed a letter containing the deadly bacteria. Sen. Patrick Leahy, D-Vt., was the second prominent Democrat to be targeted, following Senate Majority Leader Tom Daschle. But so far, no Washington officials or media commentators seem willing to publicly ask the question that is quietly nagging many people on Capitol Hill: Were Democrats specifically targeted for anthrax attacks? And given growing evidence that they were, why is no one talking about it?

On Tuesday traces of anthrax were also found in the Senate offices of Ted Kennedy, D-Mass., and Christopher Dodd, D-Conn. But the Associated Press reported that officials suspect the anthrax got into Dodd and Kennedy's offices through contact with either the Leahy or Daschle letters. To date, there's no evidence that either Dodd or Kennedy was directly targeted.

So far anthrax traces have been found in 13 senators' offices -- both Democrats and Republicans -- besides Daschle's suite, the only place on Capitol Hill where an anthrax letter was actually opened. But the only two senators who have actually been sent letters containing anthrax are prominent Democrats; to date, no Republican politicians have been directly targeted. (Traces of anthrax were discovered at an off-site White House mail screening facility in October. The bacteria were found on a mechanical mail-opening device, but no anthrax was found on any of the mail itself.) And there's been a remarkable silence about that fact -- from the media, from investigators, and even from the Democratic senators themselves.

While there has been much media speculation that the letter to Leahy increases the odds that the letters were sent by a domestic terrorist, media reports all tiptoe around exactly what makes that more likely: The fact that the anthrax letters were sent to Democratic leaders and the media, groups that right-wing extremists tend to have a grudge against. The inclusion of the conservative New York Post on that list could be used to undercut the notion that the anthrax letters represent an assault against liberals, but there's been almost no analysis of the possible political motives behind the attacks.

Some reasons for this silence are obvious: Until there's better evidence, it's premature to speculate about culprits. And with the anthrax attacks coming on the heels of the Sept. 11 attacks, there's understandable reluctance among Democrats to try to score partisan points, even if the anthrax letters turn out, as many expect they will, to have nothing to do with al-Qaida.

Still, reporters seem to go out of their way to avoid pointing out the obvious: that in Congress, the only targets have been two leading Democrats. Take this item from Time Nov. 26: "While Daschle, the Senate majority leader, could have been chosen as a representative of all Democrats or of the entire Senate, Leahy is a less obvious choice, most likely targeted for a specific reason. He is head of the Senate Judiciary Committee, which is involved in issues ranging from antitrust action to antiterror legislation. Targeting Leahy seems to give more credence to the theory that the anthrax culprit is a domestic terrorist with personal grudges."

Time failed to add that Leahy is also an unabashed liberal, who led the charge against President Bush's most conservative Cabinet nominees, including Solicitor General Theodore Olson and Attorney General John Ashcroft. The senator from Vermont has also been one of the president's most outspoken critics since Sept. 11, as the administration has moved aggressively to curtail civil liberties in its war on terrorism.

Even on the Hill, as whispers grow louder that the letters were the work of a right-wing terrorist or terrorists, such speculation is limited to a "not for attribution" basis. "I think with the letter to Sen. Leahy, I think based on anecdotal experiences and conversations with people around here, that the scale probably tipped in favor of domestic right wing," said one Hill staffer who only spoke on condition of anonymity.

The FBI has not speculated about the attacker's motives or why certain members of Congress have been targeted. "Nobody knows," said FBI spokesman Chris Murray. "Yes, they're both Democrats, but they're also the leadership of the Senate."

Others in the administration say they're focused on domestic terrorists as the likely source of the anthrax -- but they don't say why. Monday night Health and Human Services Secretary Tommy Thompson told reporters, "It's appearing ... more and more likely that it's an individual in America, or individuals," although he did not rule out the possibility that a domestic terrorist may have connections with al-Qaida or other foreign terrorists.

Even Daschle's own spokeswoman, Molly Rowley, cautioned against drawing conclusions from the fact that the targets were Democrats. While everyone around the Hill has their theories, she told Salon, the truth is no one knows who sent the letters to her boss and Sen. Leahy or why. "Hey, there's lots of ways to look at it," she joked. "Leahy, Kennedy and Dodd -- there goes the Irish mafia, too."

But only Leahy and Daschle were actually sent anthrax letters; the contamination of Kennedy and Dodd's offices appears to have been incidental. Like the letter sent to Daschle's office, the letter to Leahy was postmarked Oct. 9. The Leahy letter was seized on Oct. 15, the day the letter was opened in Daschle's office, but it wasn't discovered until last week. Law enforcement officials seized all the mail in the pipeline at that time, and sent it to another location to be examined. Experts have finished sorting through 280 barrels of quarantined mail seized from the Capitol's mail system at that time, and the Leahy letter was the only other contaminated letter found.

Like the Daschle letter, the Leahy letter was postmarked Trenton, N.J., with a return address of a nonexistent elementary school -- the Greendale School, Fourth Grade -- in downward-angled block lettering.

Rowley said the discovery of the Leahy letter did not have nearly the same effect on the Hill as the Daschle letter, for many reasons. First, the Leahy letter was never opened. Second, the letter was sent more than a month ago, and anyone who had been exposed to anthrax from the letter would have presumably shown symptoms of anthrax exposure by now -- and no one has.

"In some ways, the news was mixed with a tiny bit of relief, because it made the trail of anthrax more understandable," Rowley said. "Because so many different offices were found to have trace amounts of anthrax, people thought all along there must be a second letter. In some ways, it made the evidence more comprehensible. The sad truth is that we are learning to live with anthrax. We've all learned something about trace amounts and gross amounts, about the effectiveness of Cipro and doxycycline."

While the FBI and Daschle's office remain mum on why Leahy and Daschle were specifically targeted, the bureau did release a profile last week of the suspected anthrax mailer. The FBI says the suspect is probably a Unabomber type -- "a non-confrontational adult male" with "access to some laboratory equipment with a familiarity, direct or indirect, with the Trenton, N.J. metropolitan area."

While saying nothing about possible motives, the FBI profilers speculated that the attacker "did not select victims randomly. He made an effort to identify the correct address, including zip code, of each victim and used sufficient postage to ensure proper delivery of the letters. The offender deliberately 'selected' NBC News, the New York Post, and the office of Senator Tom Daschle as the targeted victims. These targets are probably very important to the offender. They may have been the focus of previous expressions of contempt which may have been communicated to others, or observed by others."

Th FBI profile was released just days before the discovery of the Leahy letter was announced.

Investigators believe the spores in the three letters sent to Daschle, NBC anchorman Tom Brokaw and the New York Post come from the same strain of anthrax. The anthrax in the media letters was in a heavier, grainier state than the material in Daschle's letter, which was a finer, more dangerous grade. The Leahy letter is still being examined at a crime lab in Fort Detrick, Md.

"It's being analyzed and evaluated as for its contents, its potency, and [for] any fingerprints, any hair samples, any other things that may give us some indication of who the individual or individuals are that have perpetrated this terror on America," Thompson said.

Results of those tests are expected to be made public Wednesday.