Rep. Scott McInnis of the GOP wants leading green groups to denounce eco-terror, though they're already on record against it. Is he using Sept. 11 to crack down on groups he disagrees with? 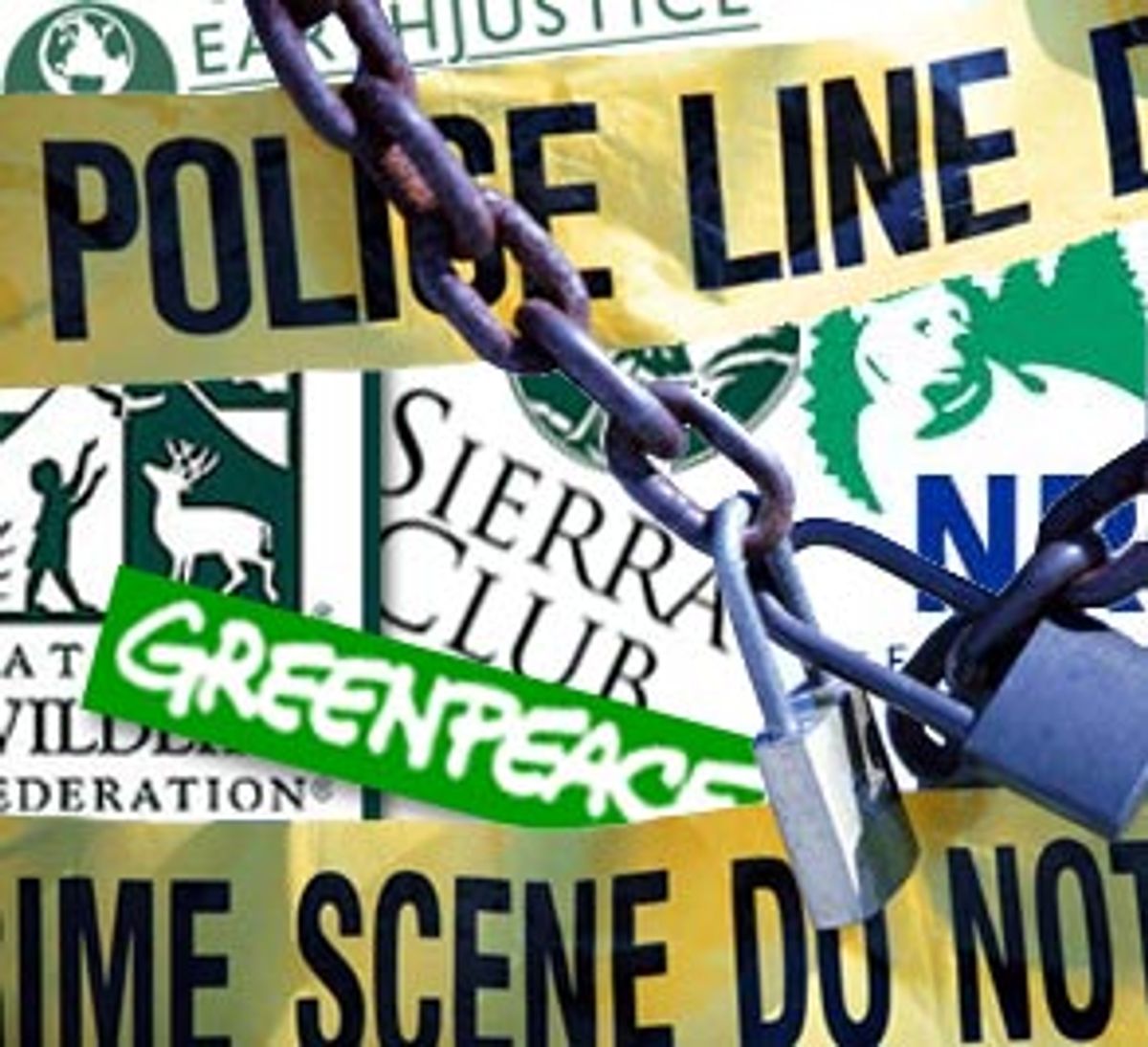 The clock is ticking for some of the nation's largest environmental groups, who have been asked by Republican congressmen to "publicly disavow" acts of "eco-terrorism" by Dec. 1.

Most environmental leaders have blasted the request as a "witch hunt" and a publicity stunt by U.S. Rep. Scott McInnis, R-Colo., the self-styled czar of the war against eco-terror, and most say they will ignore the coming deadline. But McInnis' maneuver has caused something of a split in the environmental community, with some leaders acceding to the Republican's demand and publicly denouncing eco-terrorists.

McInnis' request, made in a letter signed by six other Republicans, raises questions about the extent to which, in the wake of the Sept. 11 attacks, legitimate political activity will come in for new scrutiny as the nation fights its war against terror. It's also worth noting that at a time when deadly anthrax attacks targeting Democrats and the media are looking more and more like the work of domestic terrorists, there's been no GOP hue and cry for conservative groups -- even ones that have condoned violence (including anthrax threats) against abortion providers and government officials -- to denounce terror.

Mostly, the response from environmentalists has been outrage. "I'm troubled by the fact there is a certain witch-hunt aspect to this," said Buck Parker, executive director of Earthjustice, an environmental law group. "They have no reason to think that environmental groups would support terrorism." Parker asked whether McInnis and his colleagues would send letters to antiabortion groups such as the National Right to Life Committee and other conservative organizations demanding they also denounce terrorism and murder inflicted by pro-life fanatics and anti-government extremists such as Timothy McVeigh.

McInnis' letter, dated Oct. 30, went to the Sierra Club, Greenpeace, Earthjustice, League of Conservation Voters, World Wildlife Fund, National Wildlife Federation and the National Resources Defense Council. Authored by McInnis, chairman of a House subcommittee investigating acts of arson and monkey-wrenching that have caused $43 million in damage over the past two decades, the letter was signed by GOP House colleagues James Hansen of Utah, John Peterson of Pennsylvania, Bob Schaffer of Colorado, Greg Walden of Oregon, J.D. Hayworth of Arizona and George Nethercutt Jr. of Washington.

"As our Nation begins the recovery and healing process following the tragedy of Sept. 11, we believe it is critical for Americans of every background and political stripe to disavow terrorism in all its forms and manifestations," the letter said. "Americans simply cannot tolerate, either overtly or through silence, the use of violence and terror as an instrument of promoting social and political change."

The congressmen added that while eco-saboteurs' acts have not risen to the level of the World Trade Center attack, they are "no less deplorable."

Leading environmentalists insist they have never overtly or silently tolerated acts of property destruction, and call the letter "McCarthyesque."

"We have been denouncing eco-terrorism since before Scott Mcinnis knew it even existed," said Sierra Club executive director Carl Pope, who noted his group has offered rewards for the capture of eco-saboteurs.

"The real tragedy is that, as the country tries to pull together, a number of politicians are already in the process of breaking that trust," said John Passacantando, executive director of Greenpeace USA, which urges peaceful protest and civil disobedience. "They are trying to stick it to environmentalists in the name of patriotism."

The letter gave the environmental groups until Dec. 1 to respond. Some of the environmental organizations said they had received a similar letter days earlier from the National Center for Public Policy Research, a conservative think tank.

Greenpeace and Sierra Club returned curt responses saying they have always denounced eco-terrorism. Passacantando wrote that elected officials should get to work rooting out terrorists and protecting the nation from anthrax rather than wasting taxpayer dollars to harass environmentalists. Parker of Earthjustice said he did not want to dignify the letter with a reply.

But not all environmental groups were offended.

In letters published in the New York Times and sent to the congressmen, the National Wildlife Federation criticized the use of property destruction to push environmental objectives. Spokesman Phil Kavits said eco-saboteurs are a threat to the entire environmental movement.

"It's something we did feel we needed to respond to," Kavits said of the McInnis letter. "We thought this was an opportunity to unequivocally state that the use of violence or destruction of property is not an appropriate means of realizing environmental objectives."

An aide to McInnis said the letter was not intended to impugn the reputations of the environmental organizations or connect them with eco-terrorists.

"The response is important because of its symbolic value in marginalizing" eco-terrorists, said Joshua Penry, staff director for the House Subcommittee on Forests and Forest Health.

McInnis himself put it this way in his letter to the green groups: "We trust that you will join us in publicly condemning this source of domestic violence. Your statement would send a profound and powerful message to these organizations: Americans of every background and political persuasion repudiate the use of terror in every form, including environmental terrorism."

And if the groups refuse to respond?

"If they choose not to respond to us, and still outwardly condemn these individuals, folks can live with that," says Penry. "If there is an organization that doesn't answer? We'll let the public decide."

The letter comes as McInnis tries to make a name for himself as America's eco-terrorism czar. His House Subcommittee on Forests and Forest Health is trying to crack the shadowy Earth Liberation Front, and his district is home to the Vail ski resort, which sustained $12 million in damage in 1998 when the ELF torched a posh, mountaintop lodge to protest an expansion into an endangered lynx habitat. Some of the other congressmen who signed the letter also live in districts where acts of property destruction have been claimed by the ELF and the Animal Liberation Front, or ALF, a group best known for opening cages at mink farms and burning facilities where animal experiments take place.

No one has ever died in an act of property destruction claimed by the ELF or ALF, and both organizations say they make efforts to avoid the loss of human life.

Because the ELF was declared a domestic terrorist organization in 1999, the FBI already had authority to monitor suspected members, even if they are not linked to a crime. Thanks to the anti-terrorism legislation signed into law by President Bush, however, investigators have even greater authority to snoop on suspicious individuals suspected of sympathizing with eco-terrorists -- and that worries mainstream environmentalists.

In a letter sent last month to all 100 U.S. senators headlined "Your Rights or Your Safety, You Shouldn't Have to Choose," Greenpeace's Passacantando warned that new anti-terrorism tools being given to law enforcement agencies could lead to "large-scale investigations of American citizens for supporting and engaging in civil disobedience." Peaceful civil disobedience -- as practiced by Mahatma Gandhi, Martin Luther King Jr. and Nelson Mandela -- is a cornerstone of the Greenpeace philosophy and has raised environmental awareness, the group's director said, but giving police added powers could have "the perverse effect of discouraging citizens from participating in the very essence of our democracy -- the right to peacefully protest."

McInnis' subcommittee has subpoenaed Craig Rosebraugh, a former spokesman for the ELF, to testify at an eco-terrorism hearing in February. The hearing was initially scheduled for October but was postponed because of the terrorist strikes of Sept. 11. In the weeks since, McInnis has repeatedly invoked the tragedy of the attacks on the World Trade Center and Pentagon to drum up support for a crackdown on "eco-terrorist cells" that have "sent a ripple of fear through all the many communities in their destructive path."

On Oct. 3, as congressmen took to the House floor to denounce terrorism, McInnis turned to the topic of eco-terror.

"Mr. Speaker, let me begin by talking about a level of terrorism that has been lost in the battle, and that is the concept called eco-terrorism that is occurring within the borders of the United States," McInnis said. The congressman pledged to push law enforcement agencies (which have put their investigations of property destruction on the back burner) "to pursue eco-terrorism as actively as they are pursuing other criminal acts against our society."

"Unfortunately," he continued, "some people have turned a blind eye because this destruction, this terrorism, is being activated under the so-called cloak of protecting the environment." He did not say who is turning a blind eye to eco-terrorism, but mentioned the Sierra Club and League of Conservation Voters in the next breath, and added, "These organizations ought to step forward and actively condemn acts of eco-terrorism ... Every respectable environmental organization in this country ought to adopt a zero tolerance of eco-terrorism."

Officials from the Sierra Club, Greenpeace and Earthjustice said they already have "zero tolerance" policy for property destruction, so there is no need for a new policy to respond to McInnis' grandstanding.

Passacantando said he believes' McInnis' statements are aimed at the general public, not prospective eco-saboteurs. He noted that Greenpeace received telephone calls from the media about McInnis' letter before his organization even received it. Associating law-abiding environmental groups with terrorists is intended to weaken the credibility of all mainstream greens, he said.

"Why is it a good time to bash environmental organizations? Because these are the groups that are trying to convince the public that drilling in ANWR [the Arctic National Wildlife Refuge] is a bad idea. These are the groups that are saying: 'There has never been a better time to conserve and to reduce the nation's dependence on foreign oil,'" he said. "These congressmen are afraid of our message."

Since 1980, according to McInnis and federal law enforcement agencies, more than 100 acts of eco-sabotage have taken place in 11 western states. Genetically altered crops have been burned in Oregon, California and Maine, and such acts are escalating, McInnis said, quoting former FBI Director Louis Freeh, who in February called eco-terrorism one of America's leading domestic terrorism threats.

On Nov. 10, the New York Times carried a story that quoted law enforcement officials saying acts of property destruction have not abated since Sept. 11. The story cited acts of arson at a federal corral for wild horses in California and at a primate research center in New Mexico. More mundane acts of eco-sabotage included the release of 1,000 mink and a large number of pigeons in Iowa.

As McInnis and other congressmen attempt to ramp up the rhetoric about eco-terrorism, it remains unclear whether the House subcommittee will yield any useful information to help crack the ELF or ALF. Law enforcement agencies have arrested a few individuals over the years for acts of sabotage, but the most noteworthy acts such as the Vail fires or the destruction of a Seattle horticulture laboratory earlier this year remain unsolved.

Spokesmen for the organizations claim to have no knowledge of acts before they are committed and insist there is no mastermind, such as Osama bin Laden, directing or financing others to carry out crimes. The organizations seem to exist in name only. Individuals join by committing an act, then proclaiming it on behalf of the ELF or ALF. Spokesmen such as Craig Rosebraugh, who has been subpoenaed to testify before the House subcommittee, then pass along the information to the media.

It will be a while before it's clear whether McInnis' efforts can stop eco-terrorism. Come Dec. 1, environmentalists will see if there's a penalty to be paid for not acceding to his demands.

Paul Tolme is a writer in Colorado.