More daring than ever, "Buffy the Vampire Slayer" is glorious and revelatory in its willingness to face up to the messiness and potential danger of sex. 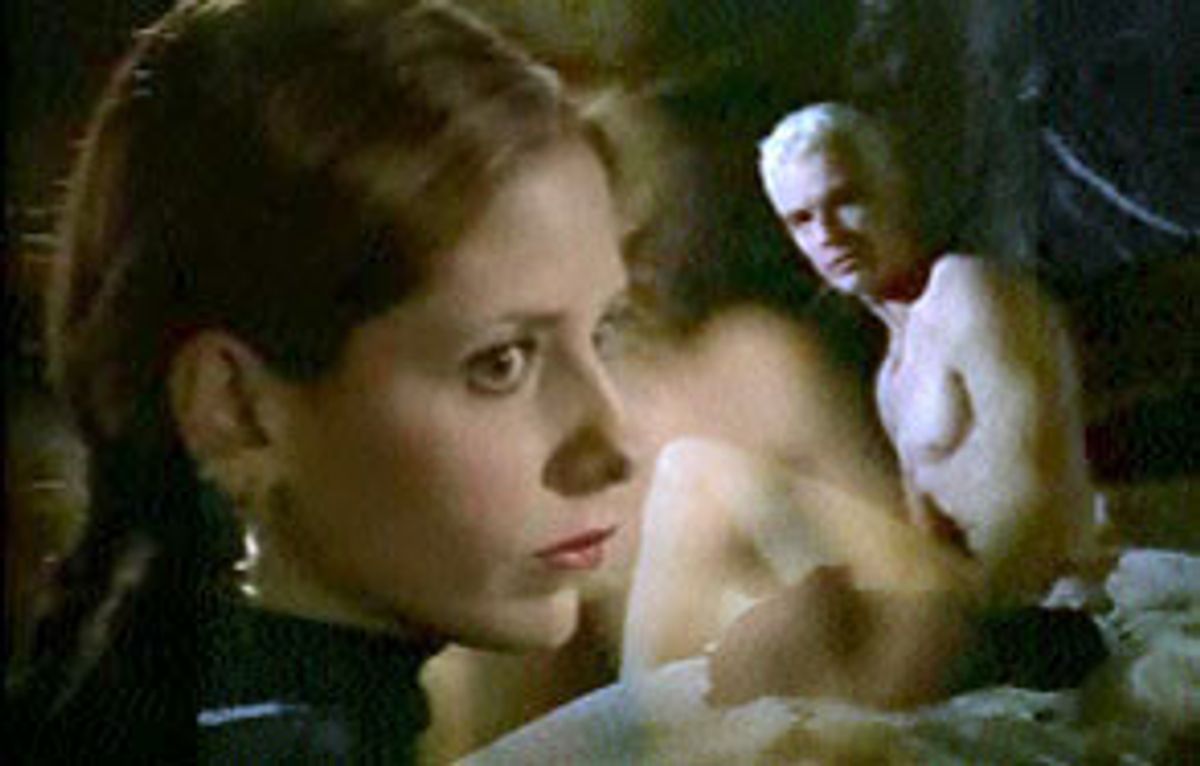 It may be the greatest postcoital line ever: "When did the house fall down?"

That's what Buffy says to Spike on the morning after, surveying the wooden beams that lie in splinters around them -- the jagged, head-shaped gashes in the plaster, the giant hole up there in the ceiling of the abandoned building where they've just woken up, entwined in each other's arms.

That ceiling used to be a floor: At some point in the previous night's festivities the two of them, wrapped in a savage embrace, fell straight through it to the floor below. You can almost see Buffy piecing together, like a co-ed after a bender, how it all came about: Spike (a vampire who's gone good against his will, thanks to a chip implanted in his head that keeps him from harming humans) swept her off her feet and slammed her against a far wall. Buffy (a vampire slayer who used to be Spike's mortal enemy, recently returned from the dead and somehow not quite as human as she used to be) volleyed by delivering a high kick to the poor guy's chin.

You say tomayto, and I say tomahto: Let's call the whole thing off.

Maybe that's what should have happened. Instead, Buffy and Spike beat the crap out of each other -- and then made it up in bed.

There are still people out there who will refuse to believe that a show called "Buffy the Vampire Slayer," created and written by a guy named Joss Whedon, could possibly deal with anything remotely sophisticated, let alone some of the darkest, most deeply recessed sexual fears and longings of the soul. But the past two episodes of the show have been more sexually frank (without being particularly explicit), and more downright exhilarating, than anything I've seen on television in recent years -- perhaps ever. In fact, it's rare to see sex dealt with so bracingly even at the movies. With the exception of David Lynch's Mulholland Drive, I can't think of a recent movie that dealt with the emotional risks and dangers of sex in such a startling and affecting way.

What's daring about these past two "Buffy" episodes is the way they've so straightforwardly defined the usually blurry meridian between aggression and sex. The sight of Buffy and Spike roughing each other up is partly metaphorical -- think of it as a deeply physical, if brutal, version of the verbal banter between Cary Grant and Katharine Hepburn in "Bringing Up Baby," or Barbara Stanwyck and Henry Fonda in "The Lady Eve."

And yet it's too untamed, too raw, to be considered solely and safely metaphorical. Camille Paglia made plenty of people angry when, in "Sexual Personae," she wrote of sexual intercourse as an expression of the will-to-power, a representation (at least sometimes) of the "surges of aggression in nature." Many, if not most, people feel more comfortable with sex when all the potentially scary stuff has been tamed out of it.

You can attempt to tame the beast all you want, but in the end, you have to at least acknowledge that we don't call it a "sex drive" for nothing. Paglia wrote that with "The Faerie Queene," Edmund Spenser was the first to "sense the identity of sex and power, the permeation of eroticism by aggression." She also wrote a line that, unwittingly and perfectly, presaged the tete-a-tete between Buffy and Spike: "The masculine hurls itself at the feminine in an eternal circle of pursuit and flight."

Spike, sick with love for Buffy, hurls himself at her; she literally throws him off, only to go after him, ravenously and amorously, a few moments later. Buffy gives as good as she gets. No, better -- between her and Spike, I'd put my money on her in the ring any day. In this dynamic, there's no such thing as the weaker sex. They're both prey to their own desires.

But one of them does have a fairly clear idea what's going on. Spike is calling Buffy on her own baloney, particularly on the way she's willfully, and unhealthily, submerged her own desires. (If you know the mythology of Buffy, you know that that thread of the story goes way back, to Buffy's bond with her one true love Angel, a vampire with a soul, whom she had to kill in order to save. But before that, he took her virginity and found perfect bliss in her love -- only to be turned evil again as the result of a gypsy curse. (The tradition of epic poetry lives, if you know where to look for it.)

Spike sees things in Buffy she can't see herself, and his perceptiveness maddens her: "I know where you live now. I've tasted it." Later, after she's sworn (for the millionth time) that she despises him and will never again be so stupid as to sleep with him, he confronts her even more directly, his passion further sharpened by his frustration with her: "You felt something."

He's desperately in love with her, though he's far too self-composed to let himself play the fool. And she seems to know how much he loves her; she works so hard to resist it that her cruelty to him is withering. On that morning after, she slings an explanation for the night before as if it were a poison dart: "You were convenient," she hisses, and Spike, his supermodel cheekbones and his innate coolness notwithstanding, can barely conceal how hurt he is.

People tumble into bed for all kinds of reasons. We know what Spike's reasons are; Buffy's aren't as immediately clear, but they're not that hard to guess, either. Frustrated with the living world for various reasons -- not the least of which is that prior to being brought back from the dead, she had found complete peace in heaven -- she seeks to escape the unadulterated crumminess of human existence the best way most of us know how.

"Buffy the Vampire Slayer" has always been a show that takes chances, but it seems to be headed in a direction that's more daring than ever. In a culture where sex is supposedly all around us and yet true, intense sexuality is in desperately short supply, the show's openness -- its willingness to face up to the messiness and potential danger of sex -- is glorious and revelatory.

It's shocking but somehow not surprising when, after clocking Spike, Buffy suddenly lunges at him for a kiss. (Note that she's the one to make the first move.) And it's bone-rattlingly sensual the way she slams him against a wall and hikes herself up on him, not bothering to waste a minute with anything so dithery as foreplay. To paraphrase Paglia, now the feminine hurls itself at the masculine in an eternal circle of pursuit and flight. Why? Because it feels so damn good. And it never, ever lasts long enough.