Sometimes empty stylish flashiness can be fun, but then why bother using a great actor like Gene Hackman? 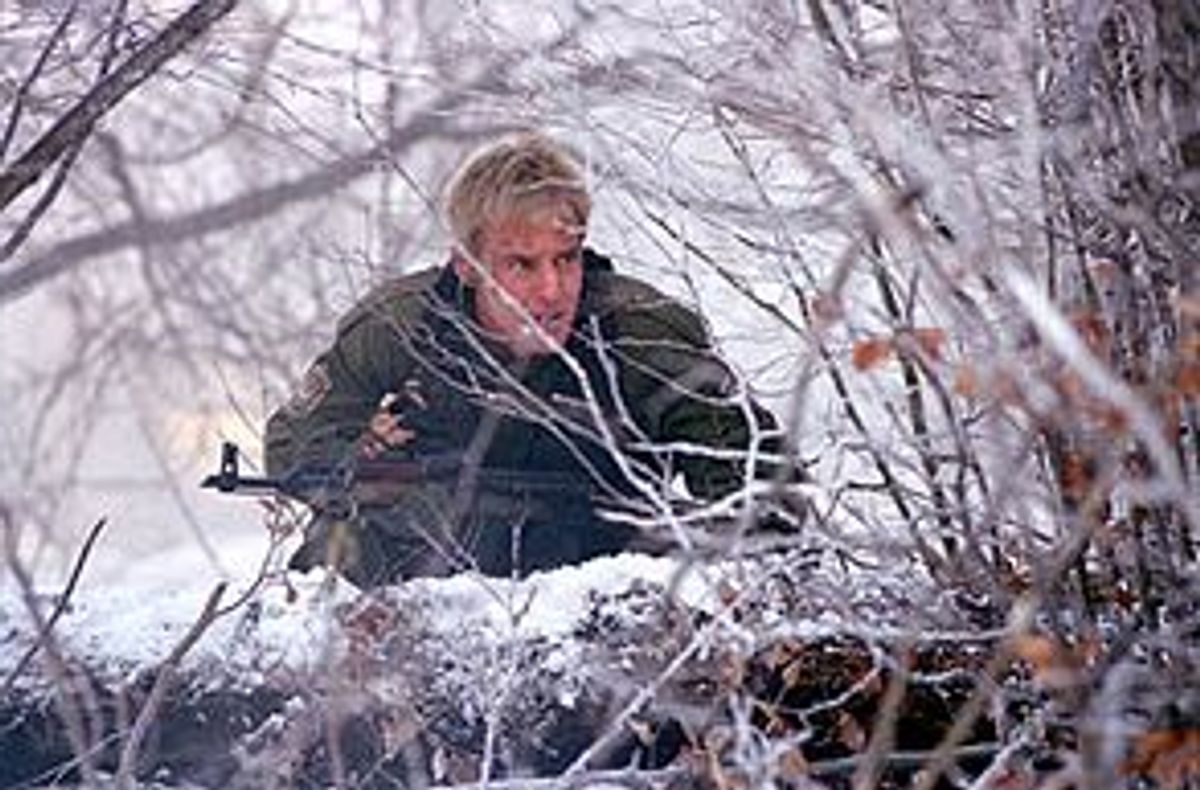 If John Moore's first feature, "Behind Enemy Lines," is any indication of the goods he's got, one thing's for sure: He's a director who'll never let acting get in the way of his filmmaking. When you've got a guy like Gene Hackman in a scene, the last thing you need is an arty circular pan to distract audiences from the real action beneath the surface -- the interior stuff that a good actor conveys effortlessly, even when the camera isn't fixed on him. But Moore throws that pan in anyway, along with lots of snappy, meaningless cutting, just to show us he knows how to do it. "Behind Enemy Lines" is a résumé masquerading as a movie.

It might not matter so much if Moore were working with crummy actors to begin with. Sometimes stylish flashiness can be fun, and the movie does have a terrific, bleached-out, ice-blue look. But anyone who cares about what actors do has a right to be distrustful of a director who puts more emphasis on the look of his movie than on the performances, as Moore has clearly done here. Even if you could bring yourself to discount the presence of Hackman -- a veteran who is always at least interesting to watch, if not sensational -- there's still Owen Wilson, whose comic timing has been on-the-button in pictures like "Meet the Parents," "Zoolander" and "Shanghai Noon" but who also shows sparks of knowing what to do in a dramatic role. He's out of luck if he thought "Behind Enemy Lines" would be the place for him to show it.

But then, if you're looking for anything beyond flashy entertainment, "Behind Enemy Lines" feels out of whack from the start. Moore and screenwriters David Veloz and Zack Penn (working from a story by James Thomas and John Thomas) try valiantly to assign some moral weight and import to what is, in places, not much more than a noisy "Top Gun"-style adventure tale. Lt. Chris Barnett (Wilson) is a bored naval aviator stationed on a carrier on the Adriatic Sea. He and his buddy, a pilot named Stackhouse (Gabriel Macht), haven't seen any action: Owing to the fragile political situation in Bosnia, they're not allowed to go out flying around in fighter planes and dropping bombs and stuff.

Adm. Reigart (Gene Hackman) catches wind of Barnett's discontent. He's a tough soldier who's certain Barnett doesn't have what it takes. But when Barnett and Stackhouse are shot down in Southern Bosnia as they go about what's intended to be a routine reconnaissance mission, Reigart suddenly becomes desperate to save Barnett. Hampered by a NATO admiral (Joaquim de Almeida) who fears that an aggressive rescue mission will jeopardize the fragile peace that's been achieved in the region, he sets about the task of throwing his weight around to save his "boy."

There's a sprinkling of depth in "Behind Enemy Lines," represented by some artfully disturbing shots of mass graves and a stellar view of a statue of the Virgin Mary with one side of her face blown off. We also eventually learn why Barnett and Stackhouse were shot down: There's a moral component to their mission that isn't fully revealed until late in the movie.

But we don't need to bother much about all that because there's so much cool flying stuff to look at, like a sequence in which Barnett and Stackhouse try to outfly a series of guided missiles, as well as the thrill of watching Barnett try to outrun a Serbian hit man.

And there's an ejection sequence that looks to be made up of 4,362 chopped-up shots -- which should by all rights make it feel 4,362 times more realistic. "In an ejection situation, there are one hundred and sixty-four different mechanical operations that occur in 1.2 seconds," Moore says, nerdily, in the press materials for "Behind Enemy Lines." "We wanted to give a taste of that process, and not the typical, 'Pop, there you go' portrayal." Eventually, though, that seat does go "pop," as ejector seats will, and Moore is on to the next thrill.

Moore has paid scads of attention to details like military hardware and gimcracks, and his stunt and action shots are lovingly, attentively shot. What's more, "Behind Enemy Lines" was filmed in the Carpathian Mountains, and many of the vistas are eerily gorgeous. The picture has a stark, desolate look -- Moore is canny enough to know how to make a stand of naked trees look lonely and despairing.

That's great for the trees, but what about the people? Hackman and Wilson are all but lost in the meshugas. There are plenty of handsome but mediocre performers who would have done just fine in a stylishly empty military adventure picture. If you're going to bother to use good actors at all, you should at least let them be all that they can be.