Afghan women hope to use the momentum of international recognition to secure civil rights and a role in government. 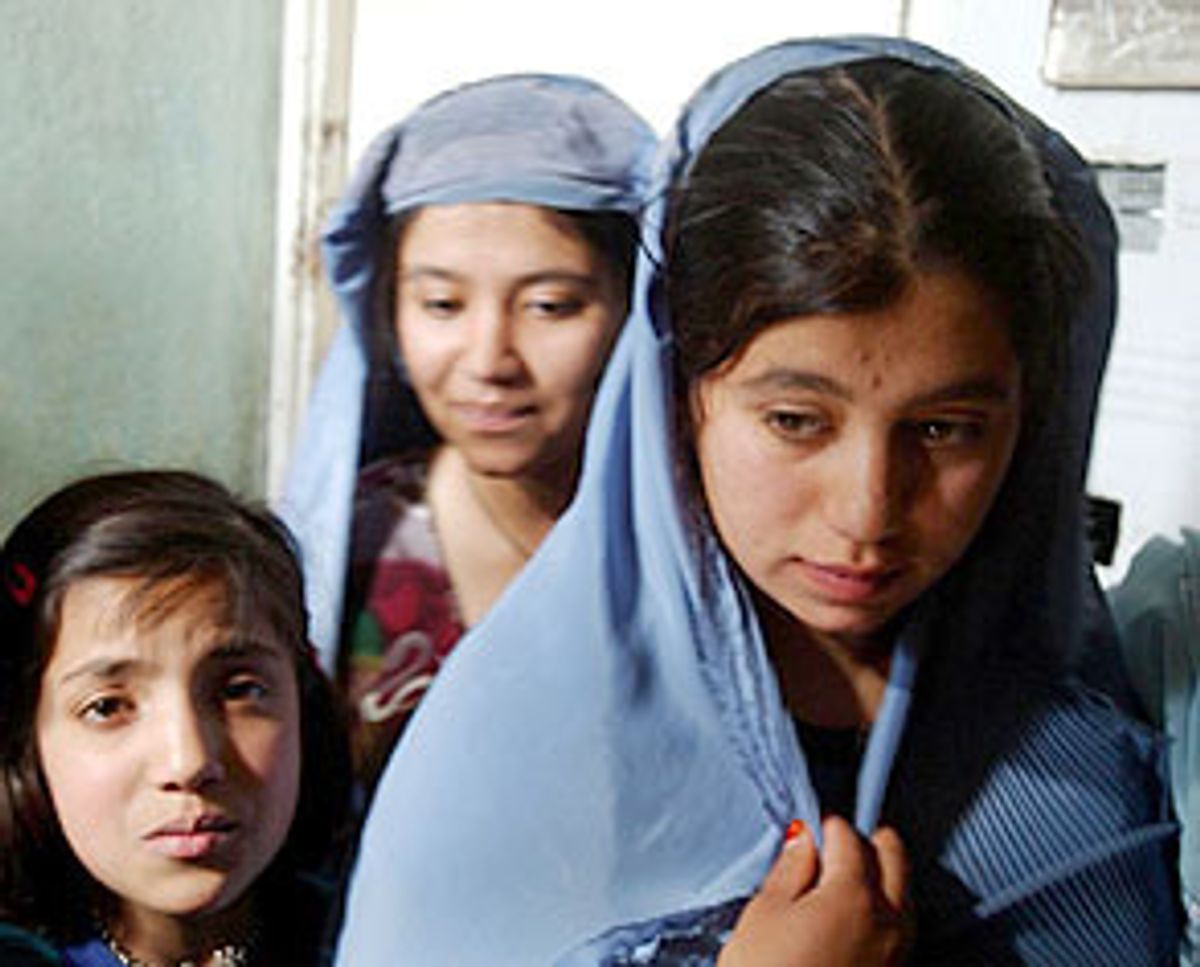 Suddenly, the face of Afghanistan is that of a woman. On the cover of Time magazine, she smiles hesitantly, without a veil; on CNN she is captured in her burqa, in the streets for the first time in years. Afghan women were the focus of a recent radio address by Laura Bush; they are the subject of Hillary Clinton's editorials in Time. They are visiting the White House, Capitol Hill and the State Department (again, at the invitation of the current and former First Ladies, who seem to be scuffling to be the Afghan women's biggest champion). And Tahmeena Faryal, a representative of Afghan feminist group RAWA, has been touring America for several weeks now: She has given 70 interviews and has turned down many other requests; her sold-out lectures at college campuses have nearly caused riots when audiences have exceeded the capacities of the venues.

The new visibility of and reverence for Afghan women has been heartening, if very belated: Feminist groups have been trying to publicize the Taliban's outrageous victimization of women for more than five years without much notice. And it has taken months for American political leaders, their eyes turned to Afghanistan, to speak publicly about the country's women. Nonetheless, no one is complaining. The feeling among weary, but inspired activists is: Better late than never.

In fact, the emergence of Afghan women as a political priority has come at a crucial moment. As the Taliban retreat and reconstruction talks begin, the issue of women's rights in Afghanistan hangs in the balance. If women are going to have civil rights, as well as a role in the new government, they need to be recognized as a priority. And increasingly, they are. As the U.N. and the U.S. begin the delicate process of overseeing political negotiation between feuding Afghan victors, women apparently are on the top of the agenda.

Just last week, delegates from four Afghan political factions met in Bonn, Germany, to discuss the interim government in Afghanistan, and women were included, although it was only a token presence: three delegates and two advisors. According to reports, though, all delegates agreed that a provisional national council should include women -- though the number of women remains to be seen.

And this week, the first Afghan Women's Summit is taking place in Brussels, Belgium, as women come together to address how to make their voices heard in discussions about the future balance of power in Afghanistan.

"We are encouraged by the meetings, but we know it's a long road," says Eleanor Smeal, president of the Feminist Majority and a recent State Department consultant on Afghan women's issues, "I hope that hope drives a realistic solution and a democracy. I worry that opportunity will be lost and somehow a dictatorship will be established. But the women's movement will be working very hard."

In pushing for women's rights and participation in government, activists point out that women now make up 65 percent of the total population in Afghanistan, the result of years of war and the attendant decimation of the male population. Even if they cannot be granted 65 percent of the seats on a new national council, say the activists, that number suggests a significant presence on any governing body.

The Afghan women who emerge as politicians will not be unprepared to serve. Despite the fact that women were largely effaced from society by the Taliban, they have a history of political and professional involvement prior to that time. Women were first given the vote in 1964 in Afghanistan, and several women have served as government ministers. Until they were forbidden by the Taliban to work or go to school, women were well represented in the professional workforce: They made up 40 percent of the nation's doctors, and 70 percent of its teachers.

Today, many women best suited for roles in the government are currently in exile. Says Tahmeena Faryal of RAWA, "Most of them might not be in Afghanistan anymore; for years they have left to other countries like Iran, Pakistan and the U.S because of the domination of the Soviets and the fundamentalists. They need to go back to their country, and they want to go back."

Even though the Taliban are no longer in power, there are still reasons to be concerned that these women won't be included in a new government. The Northern Alliance, currently in control on the ground, has historically treated women with a contempt paralleled only by the Taliban. Indeed, the Taliban came to power, in part, to put a stop to the rampant violence and rape of women by the minions of the Northern Alliance warlords. Although some progressive Northern Alliance leaders have been respectful of the idea that women deserve a role in the new government, former Afghan president Burhanuddin Rabbani -- who took control of Kabul last week -- is notoriously fundamentalist; it was under his rule that the first laws were passed forbidding women freedom of movement.

The dominance of the Northern Alliance, both on the ground and in the political discussions, causes great consternation to some Afghan women. Uncompromising feminists, such as those represented by RAWA, believe that women will never be allowed a significant role in the government as long as religious conservatives are involved.

"We believe that one day, that when [fundamentalists and the Northern Alliance] aren't armed anymore, they can take part as any other group in the election, or future government -- as long as they have the support of the people and are elected by the people," she adds. In the meantime, Faryal says that RAWA is in support of a government headed by the former king, and believes that U.N. peacekeeping troops are critical in these chaotic days. (The Northern Alliance opposed this idea at Bonn.)

It is likely, say Faryal and other activists, that the Northern Alliance and other Afghan fundamentalists will seem as frightening and unruly to the rest of the world as they do to the region's women. For this reason, they say, the odds are slim that the Northern Alliance will be able to take over Afghanistan now, even though their presence there is still very strong.

Perhaps more persuasive evidence of the Northern Alliance's eventual loss of control is the current influence of their war allies and the U.N., who provided the forces to drive the Taliban out and now hold in their hands the billions of dollars that Afghanistan desperately needs in order to rebuild. Optimists among women's rights proponents believe that as long as powerful outsiders dangle this carrot, they can diminish the influence of fundamentalists and demand that women's civil rights and involvement in the government be part of any rebuilding process.

Smeal has been consulting with Laura Bush and the State Department on women's issues in Afghanistan, and says that her group will continue to push for women's participation in upcoming talks. One of the most promising signs that she will be successful is the involvement of internationally influential women in the publicizing of the plight of women in Afghanistan. The high profile of these advocates -- Laura Bush, perhaps, above all -- seems to ensure that women's rights will be part of any ultimatums handed to the new Afghan administration by the U.S. government.

As Laura Bush told the nation in the first ever presidential radio address delivered by a first lady, "Civilized people throughout the world are speaking out in horror -- not only because our hearts break for the women and children in Afghanistan, but also because in Afghanistan, we see the world the terrorists would like to impose on the rest of us ... Fighting brutality against women and children is not the expression of a specific culture; it is the acceptance of our common humanity -- a commitment shared by people of good will on every continent."

Speaking more directly, Hillary Clinton advocated in recent editorials that "we can start by including women in the rebuilding process in Afghanistan. And just as the Clinton Administration withheld recognition of the Taliban government and condemned its treatment of women, we must not recognize any successor government until women have the right to determine what role they will play in 21st century Afghanistan."

(It is somewhat ironic that the American government is now advocating women's rights in Afghanistan, especially considering that Bush's first act as president was to cut all funding to international aid organizations that provided abortions as part of family planning services. The U.S. also is one of only a handful of U.N. countries that haven't ratified the U.N.'s Convention on the Elimination of All Forms of Discrimination Against Women, better known as the International Women's Bill of Rights. One of the other countries that hasn't ratified the bill is Afghanistan.)

Afghan women already have used this momentum to arrange meetings with Laura Bush, Hillary Clinton and U.N. and State Department officials to further their cause. And this week, at the Afghan Women's Summit in Brussels, 50 Afghan women leaders -- both current residents and exiles -- will meet to strategize about forging a role in the new government. Three of the attendees will be the female delegates that participated in the talks held in Bonn.

And back in Afghanistan, news reports indicate that many women have shed their burqas and left their homes for the first time to seek work or go to school. When Kabul TV went back on the air two weeks ago, an unveiled woman -- Shakaba Amid -- was among the presenters.

But it is much too soon to claim full-fledged liberation. Last week, when Soraya Parlika, a prominent Afghan feminist, tried to organize a women's march to the U.N. compound in Kabul to demand women's participation in the new government, she and her followers were forbidden by the Northern Alliance to march. And while photographers have captured inspiring shots of women triumphantly taking off their burqas, the fact is that most women are still too scared -- or too traditional -- to go without them.

."A few woman taking off their burqas and appearing on TV screens does not mean the liberation of women," says Faryal. "Most women still wear their burqas, most are still at home, and can't work, and are afraid to go out of their houses. They are still afraid of the soldiers of the Northern Alliance."