My father is a burning martyr scratching his balls as I condemn him for his sin. 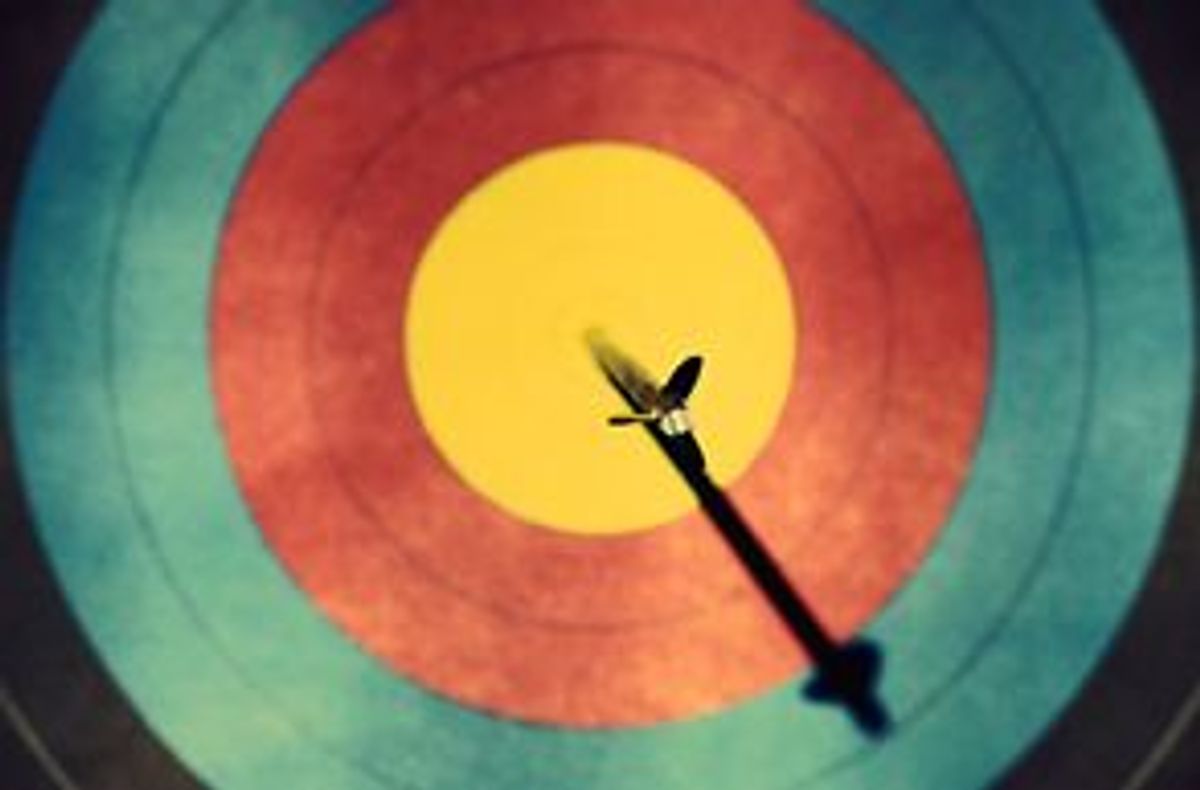 My father's sitting on the cold radiator across from the sink I'm standing near. There's a table between us, a home to four empty chairs. I'm examining the sloped floor. I'm perched at the higher end and it's as if my father's gaze is desperately trying to climb up to me, only to slide back down in the landslide that is our kitchen floor. This home is crooked. It was like this when we moved here. It needs books or something to prop up my father's end, to level everything out.

The sun is shining behind him, giving him a glorious burning head like Lucifer before he fell. My father's face is a shadow, a black hole inside that mane of fire. His pants are greasy and way too big for him and the red, stained Hanes shirt he's wearing has a hole near its flimsy little pocket. He's a peasant. He's a martyr, sitting as if on trial before Judas, his daughter.

I'm holding a basketball, twirling it in my hands, thinking it's the most interesting thing in the world. This rubber ball does just what I want it to -- I throw it down, it bounces back. It has bounced off cars, hoops, me, my boyfriend, the gravel, the walls of my house and even once, by accident, the neighbor's dog. And it's still here.

My father's smoking Marlboro Lights from the hard pack, which he sticks in the pocket of his sweaty T-shirt. He does this not so much to resemble the Marlboro Man or Jack Kerouac, but because it's accessible and convenient. His cancer stick is his sword of fire. As long as that one addiction is indulged, he can fend himself against all other transgressions. They float up with the spindly, translucent smoke.

His coughs come out like words. They say he's uncomfortable. He's getting tired of waiting for me to speak. He's restless. He's getting sick of watching me play with my basketball, he's kind of phlegmatic and that's because he'd like to go for some god damn coffee instead of sitting here in my mother's kitchen saying nothing.

This kitchen hasn't been remodeled yet. The walls are a sickly yellow covered with grime like shaded pencil, the floor a cracked linoleum substitute. Off-white. Peeling. When we moved here six years ago, there were plans to tear this crooked place down and build a better home in the backyard. It never happened. This is the same crummy, dilapidated place it used to be.

It's September of 1996. I'm 14 and every bit as awkward as one imagines high school sophomores are -- not a freshman anymore, not a senior yet, still at the bottom of the food chain but not low enough to see the beauty in all of it. I'm still a basketball player. The mayor still lives two doors down in our black-and-white little coal town. Bill Clinton is still president, but hasn't been impeached yet. He hasn't been caught yet. My father, however, has been caught. My sister and I realized what was going on while we were playing darts in her garage two days before.

"Well, what do you think he could've meant by 'Your suspicions are probably correct'?" She tossed a dart. Bonk. Pluck. Not quite.

"Well, I don't know either." Pluck. Sloosh. Bonk. We were silent for a while, trying to put the facts together. My parents had never been happy. My father had always slept on the couch. What was different now, after 15 years, to make him leave?

The answer hung over us like fog. It wrapped around us so closely we couldn't see it. Pluck. Sloosh. And then, suddenly, someone turned the fog lights on. Bonk. Sloooosh ...

He was fucking a young, married woman from our church. A woman I played Nintendo with on Sunday afternoons. A woman whose children I baby-sat.

And now he is in my mother's kitchen. On the radiator. I'm twirling my orange globe. He scratches his balls from time to time. I've lost the ability to be courteous and tell him to stop, it's disgusting. Well, he says, he's got jock itch. He coughs. I say that it's even more disgusting then. Well, he replies while puffing himself up, I shouldn't be disgusted by my father. Daughters should respect their fathers. I ask him if daughters deserve respect too, and he says yes, and he respects me as a father should, with discipline.

Then why've you been sleeping with my friend? What are you trying to teach me now? He never answers. He just sits there, bruised and battered like a martyr pelted with stones. And I'm his Judas. I utter the condemning words. I throw the final stone.

A jingling sound announces that my dog is entering the room. I'm petting her, loving her for her loyalty, for her precious eyes and the way she understands right and wrong. For the way she knows to lower her head and slink away if she messes up the carpet. I'm remembering that she is Holly the Christmas Dog, the runt of the litter who nudged my hand six years ago, with her red collar and meek little grin. My father is calling her but she's staying with me. And he calls and he calls, and he snaps his fingers. And she won't come.

He's leaving. He's got to take a load of his stuff to his new home. Light is following him out the door, illuminating his golden head. The radiator is still cold. The sun, still a glowing peach in the sky. I feel so righteous I could pluck it from its place in the heavens and take a bite. I'm seeing freedom in his every step. I'm watching the fall of Lucifer from my spot near the sink. I'm bouncing my basketball one time for each lock of his burning hair that's going sizzle, sizzle and turning to dust.

Jill Ketterer is a junior Writing major at the University of Pittsburgh, and she'd like to dedicate her first published article to her family, Jaimee, and all the Sally's in her life.