Adults love cartoons for their colors, their energy and their musical movement. Here's one that doesn't devolve into adolescent foolishness. 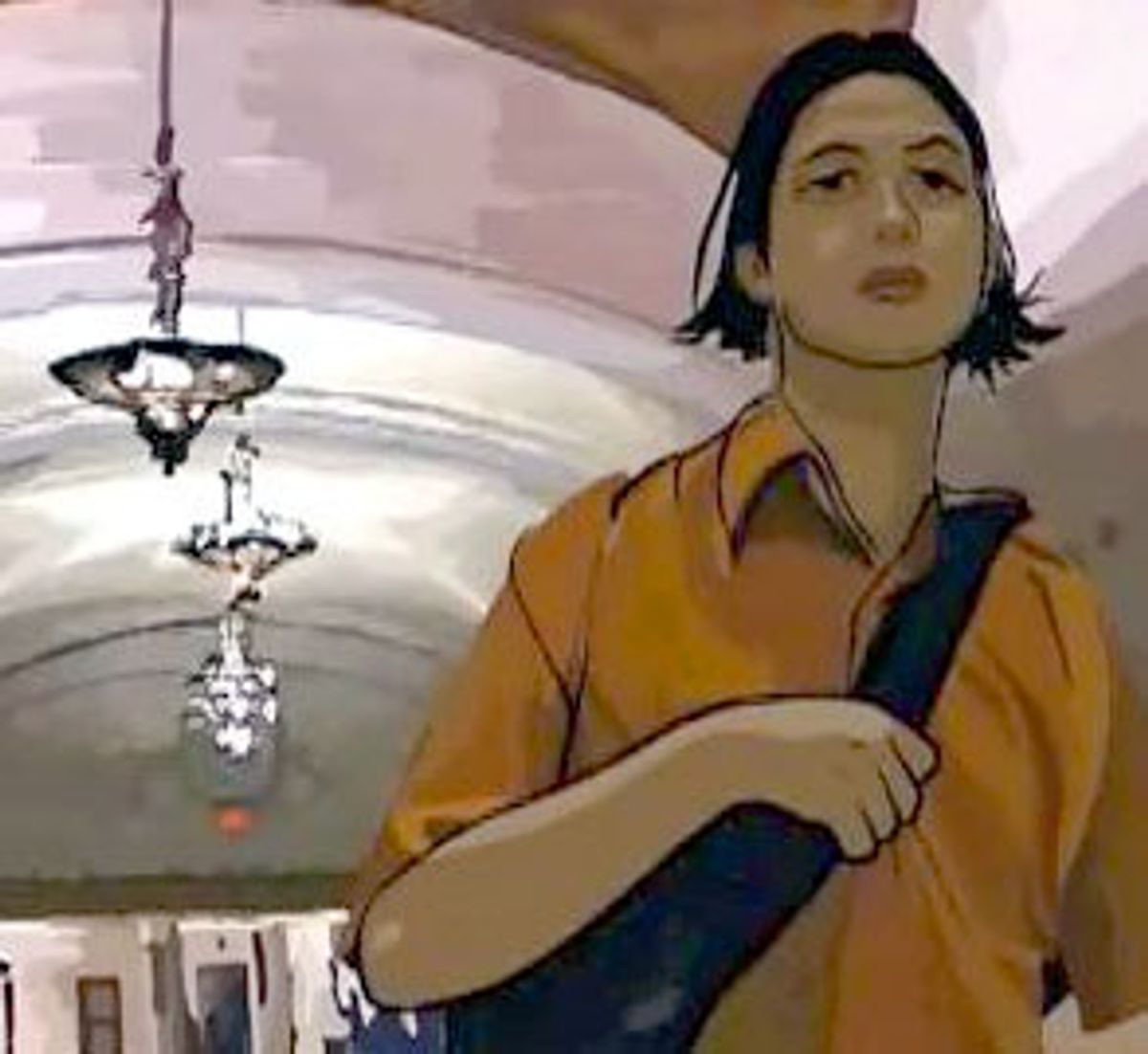 Although movies are largely a visual art form, it often feels like heresy to separate a movie's visual qualities from its content. That might be because as moviegoers, we're used to narrative formats. And they're popular for a reason: Aside from the fact that movies by experimental, nonnarrative filmmakers like, say, Chris Marker don't come to our local multiplex, the simple explanation is that most of us go to the movies because we like stories.

Richard Linklater's animated feature "Waking Life" does tell a story, but it's one made up of a cross-weaving of dream threads, a warp and weft of conversations that make sense sometimes in real-life logic and sometimes only in the shimmery, half-aware logic of our dreams. In that respect, it feels more like an experimental film than a strictly narrative one. At the same time, though, its visuals tell their own story, one that's connected to the movie's spoken dialogue but is also, somehow, floating free of it. Exhilarating, transporting, funny and haunting -- and at times maddeningly heady or narcotically logy -- "Waking Life" doesn't compare to any other movie experience I've ever had. It's the kind of thing that leaves you walking out of the theater vaguely dazed, wondering, "Did I really just see that?" -- but feeling more alive because of it.

The picture, which Linklater both wrote and directed, is a collagelike meditation on the nature of dreams, on the ways in which we proceed through our lives with varying levels of awareness (or a complete lack of it), and on the degree to which we're influenced by random elements like art or physics or language. It was shot and edited as live action; a team of more than 30 artists then "painted" it by computer. The result looks something like a moving paint-by-numbers: The colors quiver and vibrate within the outlines of the images, less a re-creation of real life than an artist's rendering of the vitality of everyday reality. "Waking Life" has a visual presence that's almost vocal, the way live cells wriggle slightly under a microscope, their silently noisy way of making sure we know that they're there.

All of that visual activity does work in the service of a story, albeit one that's a little hard to corral into a synopsis: The hero is played by Wiley Wiggins (a Linklater veteran who starred in "Dazed and Confused"), whose fate is foretold when, as a child, he experiences the feeling that he's floating off into the air: He keeps himself connected to Earth by grabbing onto the handle of the family car. We then reconnect with the grown-up Wiley as a student who finds himself trapped in a lucid dream -- in other words, he knows he's dreaming, but he can't quite find his way out of it. Every time he thinks he's waking up, he looks at his digital clock to find the numbers all liquid and swimmy, completely unhelpful in telling him anything so practical as the time.

This rangy, free-form dream becomes an odyssey that we see through Wiley's eyes: He drifts into a classroom where a teacher is ruminating on the nature (and beauty) of existentialism, and later finds himself drawn into the erotic gaze of a woman he saw only briefly in a train station. He drops in on conversations with philosophy professors and people who only wish they were: A rough bar-stool storyteller and various coffee-shop pundits; a bitter convict consumed with the desire for revenge; an ominously cheerful guy in a captain's hat who drives a taxi-cab-type vehicle that looks like a boat. (I warned you that it was hard to explain.)

The characters are played by an array of people and actors with whom Linklater has worked, or with whom he has some sort of personal relationship. One character is a professor whose class Linklater once audited. Kim Krizan, who cowrote the luminous "Before Sunrise" with Linklater, appears as a young woman bubbling over with theories on the uses and limitations of language. Julie Delpy and Ethan Hawke appear in a lovely vignette, reprising the characters they played in "Before Sunrise." We see them in bed, talking comfortably, their conversation starting out idly and dreamily and heating up into something that engages and inspires them -- an exchange that's a natural coda to their conversations in "Before Sunrise." (For those of us who love "Before Sunrise," it's also wonderful to see these two characters together again, to know that their relationship somehow lived beyond that one evening they spent together in the earlier movie.)

The dialogue in "Waking Life" consists of snippets of thought spun out into useless shaggy-dog ideas, as well as cogent theories that spread out so quickly and so fully that we can barely take them in. The characters serve up nuggets like these: "The idea is to remain in a constant state of departure while always arriving. It saves on introductions and goodbyes." "Which is the most universal human characteristic, fear or laziness?" "They say that dreams are only real as long as they last. Couldn't you say the same thing about life?"

Some of these people really know what they're talking about; others are simply reasonably bright folks who think way too much, and talk even more. It's up to us, as viewers, to decide which is which, and even then, I'd hesitate to declare anything finite. I've seen "Waking Life" twice: Some of the characters who seemed full of baloney on the first viewing made splendid sense the second time around -- and vice versa.

"Waking Life" threatened to drive me crazy both times: The talking often seemed endless, as if I were the one trapped in the lucid dream (an effect that must have been Linklater's intention, at least partially). But both times I felt myself lured deeply into the picture, almost against my will. And no matter how loopy the movie's dialogue sometimes made me feel, the look of it had me enraptured.

Fans of adult animation -- things like Walt Disney's stupefyingly dull Atlantis" or the even dorkier computer-animated "Final Fantasy: The Spirits Within" -- are always quick to point out that cartoons were originally made for adults, which is true. But defenders of contemporary adult animation have never been able to explain to me why these pictures are always so foolishly adolescent. I'm sorry to say that the lead character of "Final Fantasy" looks an awful lot like those shapely sword-and-sorcery babes that the more talented stoners used to scribble in the margins of their notebooks in junior high. Not that there's anything wrong with that kind of art -- but it's dumb to trumpet it as a new level of sophistication and maturity for cinema.

But "Waking Life" is something else again. Adults like cartoons (whether they're made for kids or adults is beside the point) for their colors, their energy, their almost musical sense of movement, and "Waking Life" wraps all those things in its embrace. As Wiley makes his way through a train station, we see it as a long, gorgeously appointed 3-D corridor divided into segments that shift and shimmer independently of one another -- a marvel of depth perception translated into art. When Wiley meets with a pointy-head grad-student type who's rambling on about the nature of human life (or some such), the view outside the window behind him shifts and changes magically. One minute we see a tropical paradise; the next, the leaning tower of Pisa. It's a brilliant (and funny) visual representation of the way our minds wander when they can't quite latch on to the information that's being presented to us -- especially if it's boring.

"Waking Life" swims along to a wonderful score by Glover Gill, performed by the Tosca Tango Orchestra -- it's the perfect marriage of music and animated movement. But even when there's no music playing in "Waking Life," the movie's lyricism is sustained by the way it looks and feels. The wordiness of "Waking Life" may drive you mad at times, but I prefer to think of it as a trick, a test, to see how fully awake and aware we are. Words are important, but life is about trusting the visuals, too. The truth is there, in the things we can see with our own eyes. Our job is simply to make sure we look.