How to wash a gas mask

Where is the normality in our New Normality, and is it OK to get water on these things? 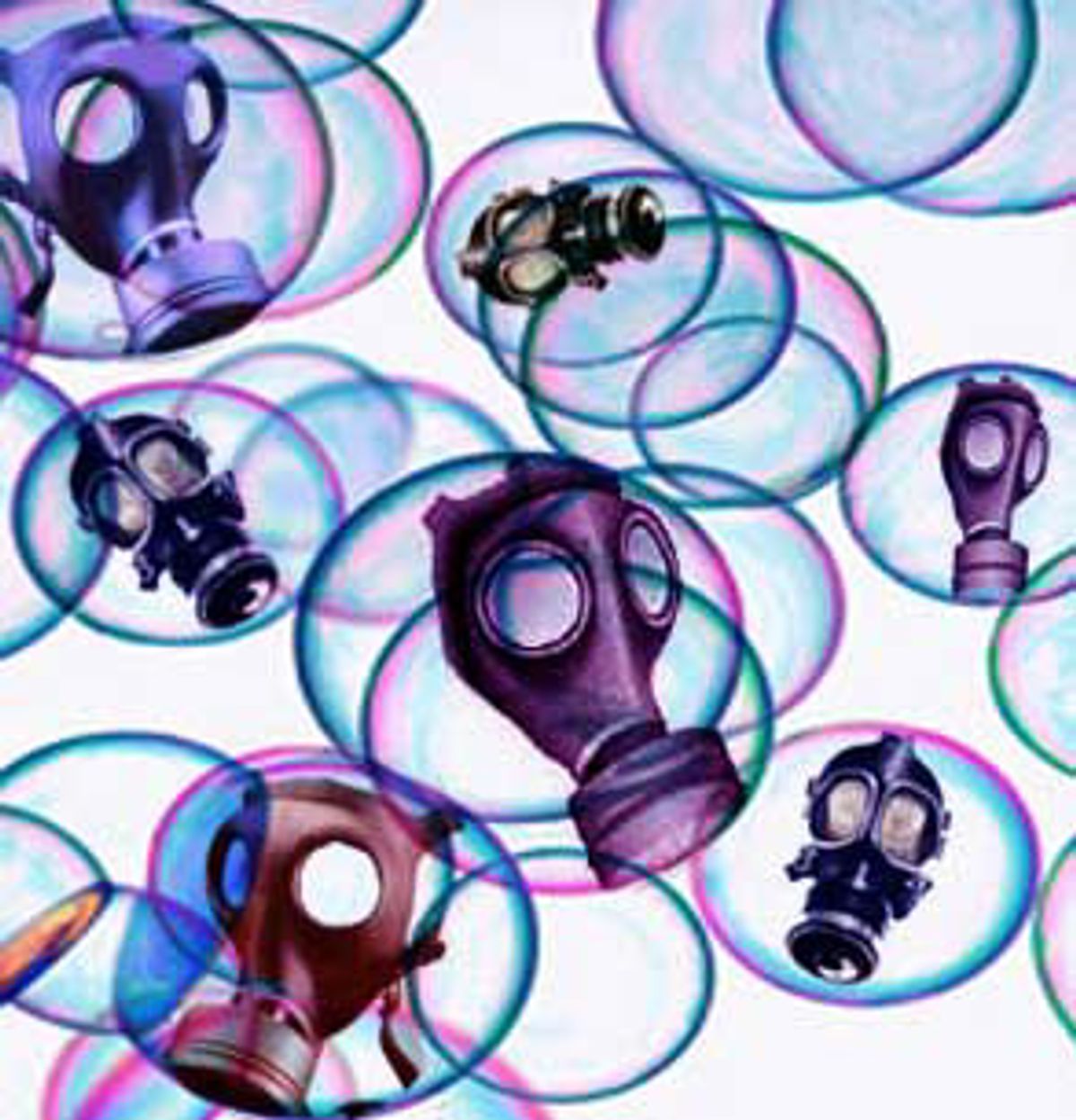 Our gas masks arrived last week in a large box, from Zurich, with a packing slip marked both "urgent" and "economy." It was a contradiction much like the state of affairs here at home: the urgency of imagining, and preparing for, the worst; the economy of resuming our daily lives.

We have tried so hard, and will keep trying, to get back to normal. At the same time, we're surrounded by reminders to take precautions for the unknown. Last week in my yard in Brooklyn, just across the river from the new neighborhood of ghosts we call ground zero, a pile of autumn leaves tossed by the wind revealed a charred strip of paper-thin metal: a peel of the gleaming facade of the towers that had until recently been the lynchpin of our cityscape. By now, all the memos footnoted "WTC" that had rained on our local streets since Sept. 11 have been collected. But still we feel there will be no normality to our New Normality, so long as we find such souvenirs nestled against our homes.

That first dreadful week, my husband and I lay in bed one night and decided we should do something, whatever we could, to prepare -- though for what, exactly, we didn't know. We could stockpile food so the children could be fed during an emergency that might strand us at home; keep the car's tank full in case we needed to make a getaway; get some family gas masks to stow away just in case. We slowly gathered extra canned food, eventually filled the tank and, battling the inertia of disbelief, discovered that it was by then too late to buy gas masks anywhere but for a small fortune on eBay.

It was through my father's international connections that we finally got our gas masks. A classical musician and expert on Soviet music, my father has been traveling around the world, forming a new symphony orchestra. By nature, he is one of those people separated from everyone else on earth by at most two degrees. It did not come as a great surprise when he announced, "I can get you gas masks. I'll call my friend Vladimir, he was a general in the Russian army." Within a few days, my father had passed through Moscow, picked up the masks and traveled to Zurich, where he posted them. They arrived in Brooklyn a week later.

Unwittingly mirroring the philosophy of some government officials, we decided to keep our own constituents -- the kids -- uninformed as to the potential severity of the situation; we waited until they were asleep before slitting open the box. And there they were: gray, heavy-duty rubber, with round glass eye pieces, a black plastic cage holding a filter in place over the nose and large oval filters attached to bulbous cheeks. I pulled one over my head. That it fit snugly seemed like a good thing. It was terribly claustrophobic in there, but I quickly surrendered to the idea that if things got so bad that we needed gas masks, standard notions of comfort would no longer apply.

Each mask came in a green army bag, and tucked inside each was a thin metal disk, about three inches in diameter, sealed all along the seam with cloth tape. I opened one of these flat cans and found a nested stack of clear glass pieces that looked like miniature petri dishes. Whatever these were, they were probably important. I searched through the bags, and in one found a folded sheet of instructions. In Russian. Vladimir had, in fact, hand written them. This surprised me as much as the masks themselves. I wet one of the blue letters to see if any ink ran; yes, it was actual writing. It was a simple nod to urgency. A Russian general I didn't know had taken the time to hand-write instructions. Not only that, but my father had told me these masks were the very best, designed by an Israeli. That had to be good.

I e-mailed my father a request to translate the instructions, faxed them to him in France and received my translation the next morning. The instructions explained the various sizes for children and adults. They explained that each gas mask should be thoroughly washed, dried and set up with the filters. The glass disks were to be used in the case of "intense light."

Intense light. That was somewhere my imagination refused to go.

What I could do, however, was clean up those masks. Having never washed a gas mask, I decided to figure it out as I went. I waited until the kids were in school, cleared out the kitchen sink and lined up the masks on the counter. I opened a new sponge, thinking it might be a bad idea to add the regular household bacteria from the daily sponge onto the gas masks. Using a drop of dish soap and a little water, I gently sponged the floppy gray masks, taking care not to let any water get into the filter fixed over the nose. I had no idea what I was doing. If a drop of water got into that central filter, was it ruined? What if water got trapped inside the inner folds of the mask? Cleaning the glass eye pieces seemed a no-brainer. In all, I decided, I was just following the instructions, which had specified I clean the masks. I was cleaning them. They would be clean. That's about all I knew.

When I was finished, I carefully hand-dried each mask with paper towels. I thought they should air dry until just before the kids got home from school, and I hung them off the backs of our kitchen chairs. It seemed a good idea to keep a window open, to let fresh air circulate through the damp rubber folds, but I always close up all the windows and turn on the alarm system when I go out. So I closed the windows. We don't have anything of great value in our home for a thief to make off with, but still ... we have these masks.

Katia Spiegelman Lief is the author of the novels "Soul Catcher" and "Peculiar Politics." She teaches fiction writing at the New School University, and lives in Brooklyn, NY with her family.