The weak case for military tribunals

The White House -- and Time, the New Republic and the National Review -- say dangerous information has leaked from the courts. Like what? 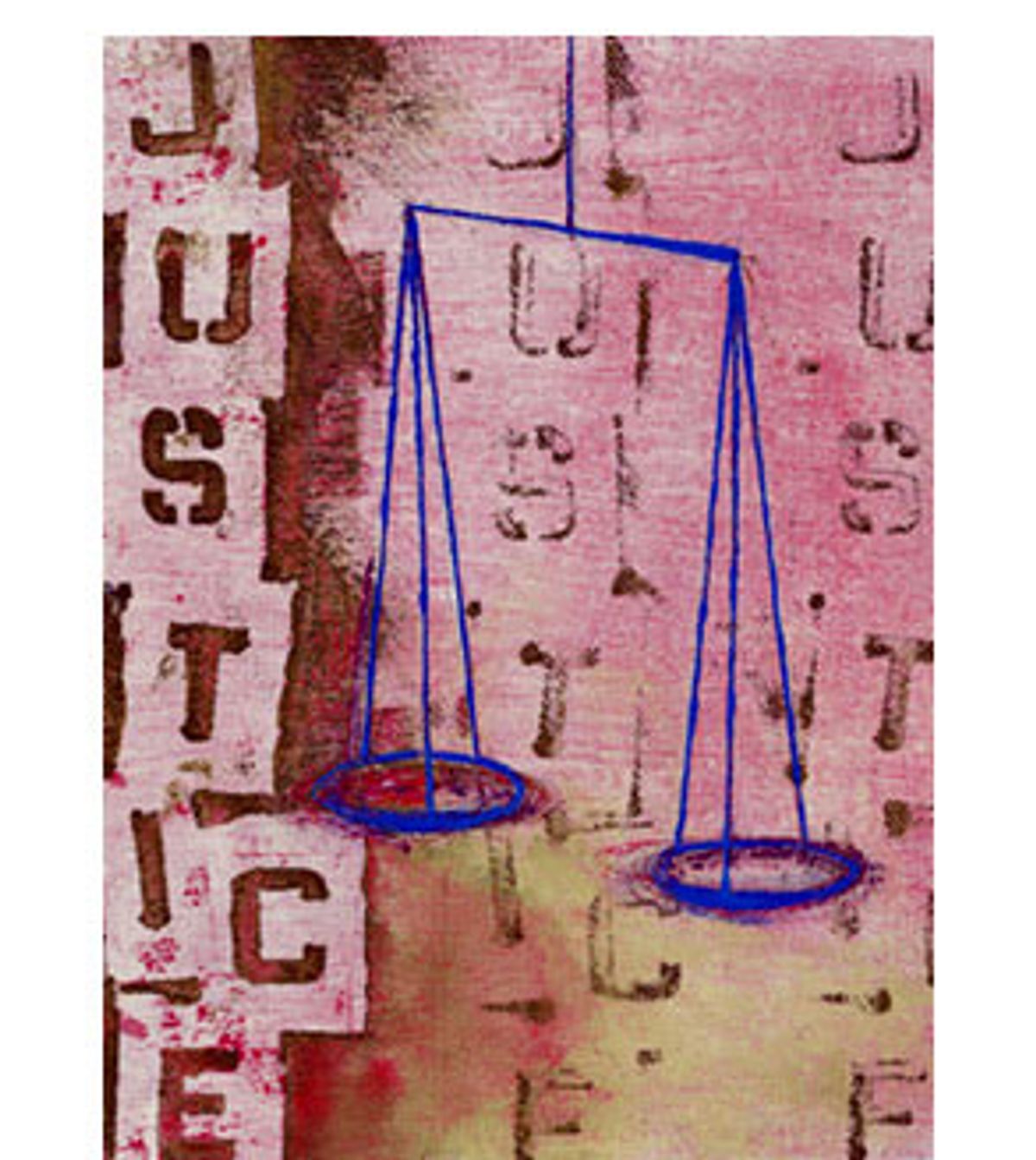 873-682505331. That was Osama bin Laden's phone number. Or, at least, it was the number of a satellite phone listed for Abu Abdallah, one of bin Laden's aliases.

This information isn't difficult to obtain -- I got it from trial testimony from May 1, 2001, in United States of America vs. Usama bin Laden, et al. And that is one of the more convincing arguments in favor of President Bush's military tribunal executive order.

Writing in the National Review, Judge Robert Bork cites what happened in the trial of those responsible for the 1998 embassy bombings in Kenya and Tanzania that killed 224 as a "conclusive argument ... that in open trials our government would inevitably have to reveal much of our intelligence information, and about the means by which it is gathered." Bork says the prosecution in that case had to reveal that U.S. intelligence had intercepted bin Laden's satellite phone calls, that as a result bin Laden stopped using the phone, and that after this revelation, intelligence sources lost bin Laden and were therefore unaware of his fiendish plot for Sept. 11.

Also used as an argument for the secrecy of a military tribunal is a theory about whether a specific type of jetliner was chosen to destroy the World Trade Center towers Sept. 11. "Because defendants in criminal trials are entitled under the Sixth Amendment to open proceedings, any information introduced in them becomes public -- which can cause problems," wrote the New Republic's Jason Zengerle. "In the 1997 trial of Ramzi Yousef for his role in the 1993 World Trade Center bombing, it was disclosed that the twin towers were engineered to withstand a direct hit from a Boeing 707 plane. Is that why the Sept. 11 hijackers used planes bigger than the 707?"

Both points make for a compelling argument. And they feed the insecure post-9/11 part of us that wants to grant the executive branch omnipotence in order to protect us. There's just one problem with these two stories, which have emerged in the media with increasing frequency as among the best reasons for supporting the privacy afforded a military tribunal -- they're demonstrably false.

First, there's the matter of bin Laden's phone. "In the New York City trial of the bombers of the U.S. embassies in Africa, a January 2000 release of documents revealed that these communications had been intercepted by U.S. intelligence," columnist Charles Krauthammer wrote in Time Magazine on Nov. 26. "As soon as that testimony was published, Osama stopped using the satellite system and went silent. We lost him. Until Sept. 11."

In the trial earlier this year, Assistant U.S. Attorney Kenneth M. Karas made much of the satellite phones used by al-Qaida. "Ladies and gentlemen, that phone is the jihad phone in this case," Karas said in May 2001, pointing to a phone number written large on a piece of cardboard. "That's the phone that bin Laden and the other co-conspirators ... use[d] to communicate [an order] to carry out their conspiracy to murder U.S. nationals." Karas was trying four Muslim terrorists for the Aug. 7, 1998, embassy bombings. And this phone number, he told the jury, is what al-Qaida members used in February 1998 to spread the call. But even Karas didn't actually place bin Laden on the phones -- he connected them to bin Laden operatives. According to one former senior intelligence official, bin Laden had stopped using satellite phones years before the embassy bombing trial, having learned from a newspaper that U.S. intelligence was able to use voice recognition technology to track him. A former CIA official was quoted in the media about the intelligence community's ability to listen to bin Laden and "within 24 hours of the leak," the official says, "the phone went dead."

CNN's Peter Bergen, author of Holy War Inc., recalls that when he met bin Laden in early 1997, an al-Qaida aide, Khaled al Fawwaz, "told me that bin Laden didn't talk on satellite phones since he understood the phones were monitored. So he generally communicated through radio and courier." That was the year before the embassy bombings took place, four years before the trial.

"These people presume their conversations are bugged," says Bergen. "These are people who have all dealt with extremely intrusive Middle Eastern governments for years, governments spying on them and trying to assassinate them for years."

Secondly, there's the 707 myth. On Feb. 26, 1993, when Muslim terrorists attempted unsuccessfully to topple the World Trade Center for the first time, a bomb in a van exploded in the complex's underground parking garage, level B-2, smashing through five underground floors, killing six people and injuring more than 1,000 others. That December, a computer disk belonging to one of the bombing defendants, Nidal Ayyad, proclaimed about the February terrorism that, "Unfortunately, our calculations were not very accurate this time. However, we promise you that next time it will be very precise and WTC will continue to be one [sic] our targets in the U.S. unless our demands have been met."

In February 1995, bombing suspect Yousef -- who had already been indicted in the 1993 attack -- was arrested in Pakistan and turned over to the FBI. During Yousef's trial, in August 1997, prosecutor Lev Dassin called his first witness: Charles Maikish, former director of the World Trade Department of the Port Authority of New York and New Jersey. Maikish testified that "the tower itself was designed to take a hit-miss span by a 707. In fact, that was the engineering of it, that it could take a hit by what was a major jet aircraft at the time it was designed in the '60s."

But al-Qaida didn't need to rely upon Maikish's testimony for such information; Maikish had made similar comments to Popular Mechanics four years before the Yousef trial, for its July 1993 issue. And Maikish's testimony that day would hardly suggest that a larger plane would have much better luck against the WTC, its "massive steel columns" designed to absorb and sway along with massive winds.

Furthermore, there's a much more likely reason Mohammed Atta and his merry band of Islamicist psychopaths decided to ultimately go with a plane larger than the 707: There are no longer any 707s in service. According to Boeing spokesman Tom Ryan, the 707, which Boeing stopped producing in May 1991, no longer flies commercially. "These are way out of service," he says.

And yet, even if the suicide bombers had flown 707s into the World Trade Center, the same tragic fate would have likely occurred, according to Eduardo Kausel, a professor of civil and environmental engineering at the Massachusetts Institute of Technology. The reasons why the towers fell, Kausel writes in a recent essay on the towers' collapse, is because of the impacts of the aircraft, the explosions, "and most importantly, the raging fire caused by the vast amounts of jet fuel carried by the planes." Both planes had full gas tanks necessary for long trips west.

And even though it has "been opined by some, among them the building's architect, that the towers did ultimately fail because the 767 is a far bigger jet carrying much more fuel than the design 707 aircraft," Kausel writes, the evidence belies such an argument. "While the 767 is indeed a somewhat larger aircraft, it is not significantly so, while its amount of fuel load is nearly the same as in the 707." The Boeing 767-200 is 59,000 pounds heavier than the 707, but it is only 10 feet, 4 inches longer in wingspan, and 6 feet, 3 inches longer. More significantly, the 767-200 can only carry 980 gallons more in fuel than the 707.

Kausel writes that "the suggestion that the buildings were designed for the crash of an aircraft is ultimately self-delusion -- and perhaps also public relations -- on the part of the design team, because not all aspects of a crash, i.e. the explosion and fire, were taken into account, perhaps because the probability of such an occurrence was deemed insignificant."

Daniel Benjamin, a former National Security Council staffer now with the Center for Strategic and International Studies, has yet to decide what he thinks about Bush's military tribunal executive order but sees the secrecy argument "as precisely backwards. We have learned so much about them through trial testimony, it's good to have open testimony."

While classified security matters obviously need to be shielded, the fact that testimony came out in previous trials that al-Qaida had been trying to manufacture chemical weapons in the Sudan is proof of the usefulness of the testimony, Benajmin says. While a quick 'n' easy military tribunal trial would be more efficient on one level, Benjamin says, information can come out in long, probing trials that provides huge intelligence benefits.

Bergen adds that the credibility of Bush's claim that bin Laden was trying to obtain nuclear weapons was enhanced by the testimony of Jamal al-Fadl, who testified in February 2001 that he went to Sudan at bin Laden's behest to purchase South African uranium. "The information that came out at that trial was pretty amazing -- and useful," Bergen says. And enhances the argument before the court of international opinion that bin Laden is truly dangerous.

There are those tribunal proponents, like law professor Ruth Wedgwood of Yale and Johns Hopkins, who make a convincing case that indubitably there will be classified information needed for the prosecution in future terrorist trials, and that the Sixth Amendment right to a public trial could compromise that information.

Though there are procedures to seal certain classified testimony, including use of the Classified Information Procedure Act (CIPA), directed to protect classified "sources and methods" from public disclosure, "Prosecutors have a very limited ability to close off some classified information," she says.

Wedgwood notes myriad other arguments that buttress her support for Bush's tribunal. Juries and judges will be placed under undue threat -- far beyond anything, say, the Gambinos, who attempt to live within society corruptly rather than try to destroy civilization, would ever attempt, she argues. Intelligence information is by definition often based on hearsay, which is inadmissible in our courts. And while the Yugloslav war tribunals allowed for anonymous witnesses -- Drazen Erdemovic's 10-year sentence from May 1996 refers specifically to the testimonies of "Witness X" and "Witness Y" -- such are forbidden in the U.S. system.

But tribunal proponents aren't yet able to point to a concrete example of secret information from any past terrorism trials being utilized by the bad guys. Talking points sent from the White House to Republican members of Congress argue that "When classified evidence must be used in civilian trials, the government is forced to choose between compromising sensitive intelligence information and letting criminals go free -- the World Trade Center bombing trial resulted in the disclosure of sensitive classified information. After the attack on Sept. 11, President Bush finds this choice to be unacceptable."

But it is unclear what sensitive classified information the White House is referring to. (Or which World Trade Center bombing trial they're referring to, for that matter.) Surely they're not referring to the rather dubious Boeing 707 argument? When asked, a White House spokesman was not able to clarify the matter by deadline.

Still, such arguments persist in the media debate on the matter. And Bergen wonders if they don't serve to promulgate, perhaps, the specific reason why the tribunals were ordered to begin with. "It would serve the public to know what mistakes were made," he says. "Perhaps this is a CYA for some people. There was a pretty spectacular failure of intelligence here. Perhaps some people are not keen to have some of that aired."