There is a new Julia, and she's less sexy than lean, tight and anxious. 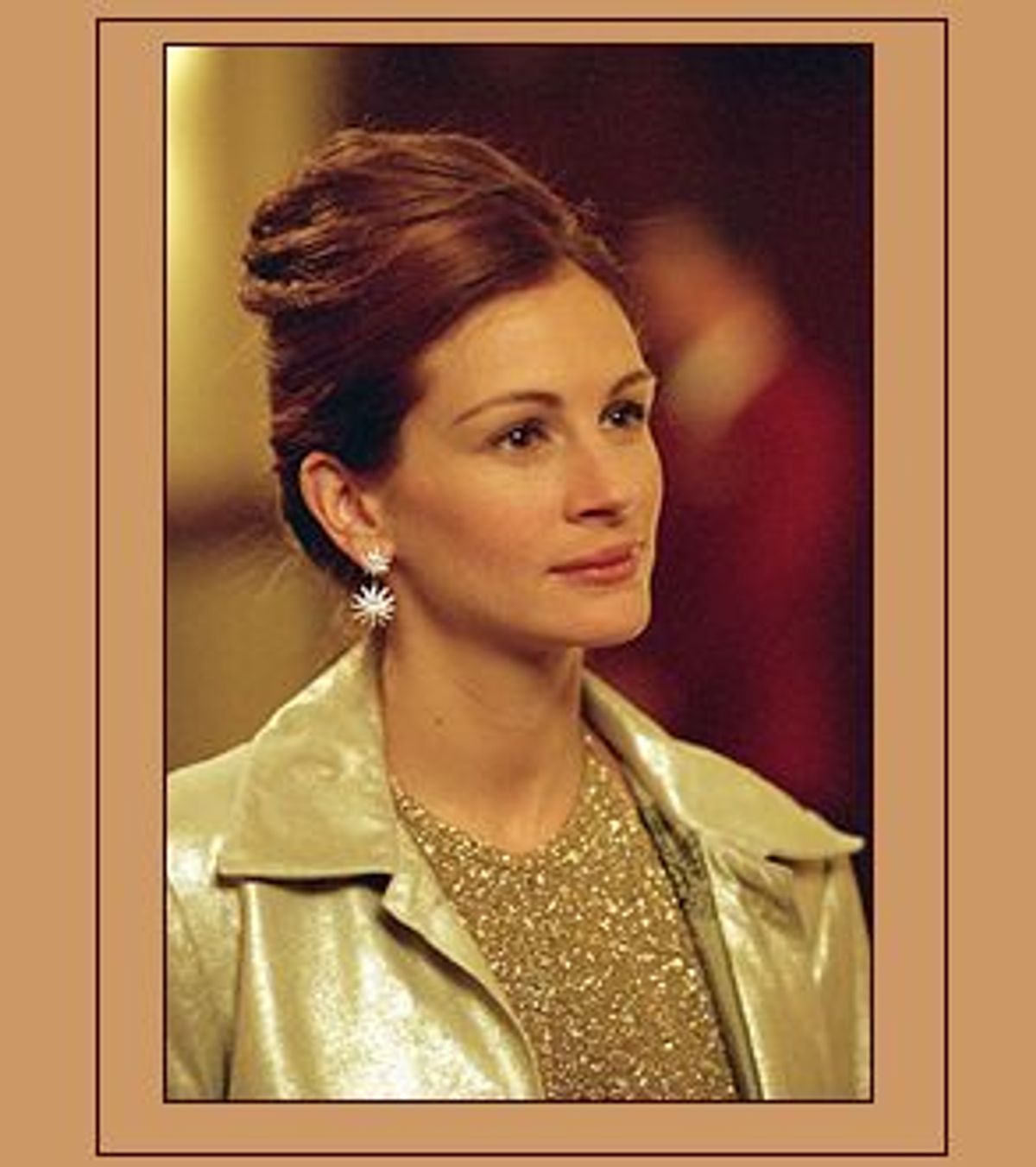 In all the slovenly, cynical mess called the new "Ocean's Eleven," the most barefaced dishonesty is that Danny Ocean (George Clooney) is doing it all for Tess (Julia Roberts). She is the wife he lost in a life patently devoted to fraud of all kinds -- stealing large sums from others, and passing off all degrees of lie on those who might once have trusted him. In a slick way that seems indistinguishable from Clooney's fatuous self-love, Danny wonders if Tess doesn't miss the ways he used to make her laugh. No, says Tess, and I don't miss the ways you made me cry.

It's the one moment of emotional truth in the entire mercenary proceedings, and it made me notice how lean, tight and anxious Roberts looks now. Her credit on Steven Soderbergh's film is "And introducing Julia Roberts," the kind of sophomoric joke that might have been considered and abandoned by wiser heads. As it is, the credit only draws woeful attention to the way Roberts is wasted here -- and, worst of all, to the way she looks. Who knows, down the road, if "Ocean's Eleven" may not look like the occasion on which she was first shown the exit door.

The idea prevails now that after "Erin Brockovich" a rapport exists between Soderbergh and Miss Julia so that they would do any kind of movie together. Beware of such sentiment. The only movies worth doing are the ones you'd do with someone you loathe. Years ago, Angie Dickinson played the same role -- Danny Ocean's miserable wife -- in the original "Ocean's 11." She may have taken the job by telling herself that she and Frank Sinatra were old chums. Better that she had noticed how far "Ocean's 11" was a sprawling benefit for the Rat Pack, a project that would have been dismissed out of hand if those cool thugs hadn't had such clout. So Angie sat around looking wan, and the idea grew that she might be a stooge.

All that happens in the new "Ocean's Eleven" is that you have time to ask yourself whether Julia isn't beginning to lose her looks. You had the same suspicion in "The Mexican" and "America's Sweethearts"? Me too. This is a face now that has spent too many late nights reading scripts, trust fund reports and the Wall Street Journal. The eyes have narrowed. She wears her hair tight in this film, and that's a disaster, for you notice that her head is small. And whereas in the age of "Pretty Woman" she was naturally slender and yet fleshy at the same time (that awesome spring in a young woman's life), I'd guess that she is having to work much harder now at keeping the weight off. That shows not just in the severity of her cheeks, but in the bad temper behind her eyes. There are those of us who do not enjoy dieting, endless workouts and the joylessness of self-discipline. So we cannot keep the feel of hatred out of our expression. It's there now in Julia, and you feel she's learned too much about self-sacrifice to give us that complete, gushing, rapturous smile again.

She has her Oscar. She's very rich. She has reputation and respectability. But all of those are now things she might lose. And you feel that dread tightening its grip on the extraordinary sexy generosity without which she would be an unknown still.

All the more reason not to take parts like Tess that give her so little to do except look edgy, unhappy and ... hungry. Not that she has a lot to do in "Ocean's Eleven," but she has two scenes where Tess goes into a very swank Las Vegas dining room and is about to have dinner. Now, these days, you can see beneath the veneer of Tess, or whomever, that for Julia dinner is a big thing. Her subtext shows. You feel anticipation, hunger, need. But then the plot is so arranged that Danny interrupts her. She doesn't get so much as a breadstick. And something in Julia Roberts' being seems to contract; a witchy gauntness sets in that is much more frightening than Steve Soderbergh noticed.

Then there is her walk. In "Ocean's Eleven," Julia has to walk a lot, and all of a sudden you notice that she walks badly. Is it that old heels problem, or something about her balance? There seems to be some load slipping from side to side. She rolls. She's awkward, ungainly, when there is so little going on in the picture that the best you can hope for is the chance to sit back and say, isn't she graceful? Isn't she lovely?

I know, Julia Roberts is only 34, and to be as rich, famous and beautiful as she is at 34 is an American dream. But somehow I get the feeling that her blithe, happy days are over. She can't really play kids anymore -- and coltishness was so much her thing. One day soon, not too far ahead, someone's going to say what about Julia as the villain.