Dean Kamen's much-hyped superscooter is a slothful step in the wrong direction. 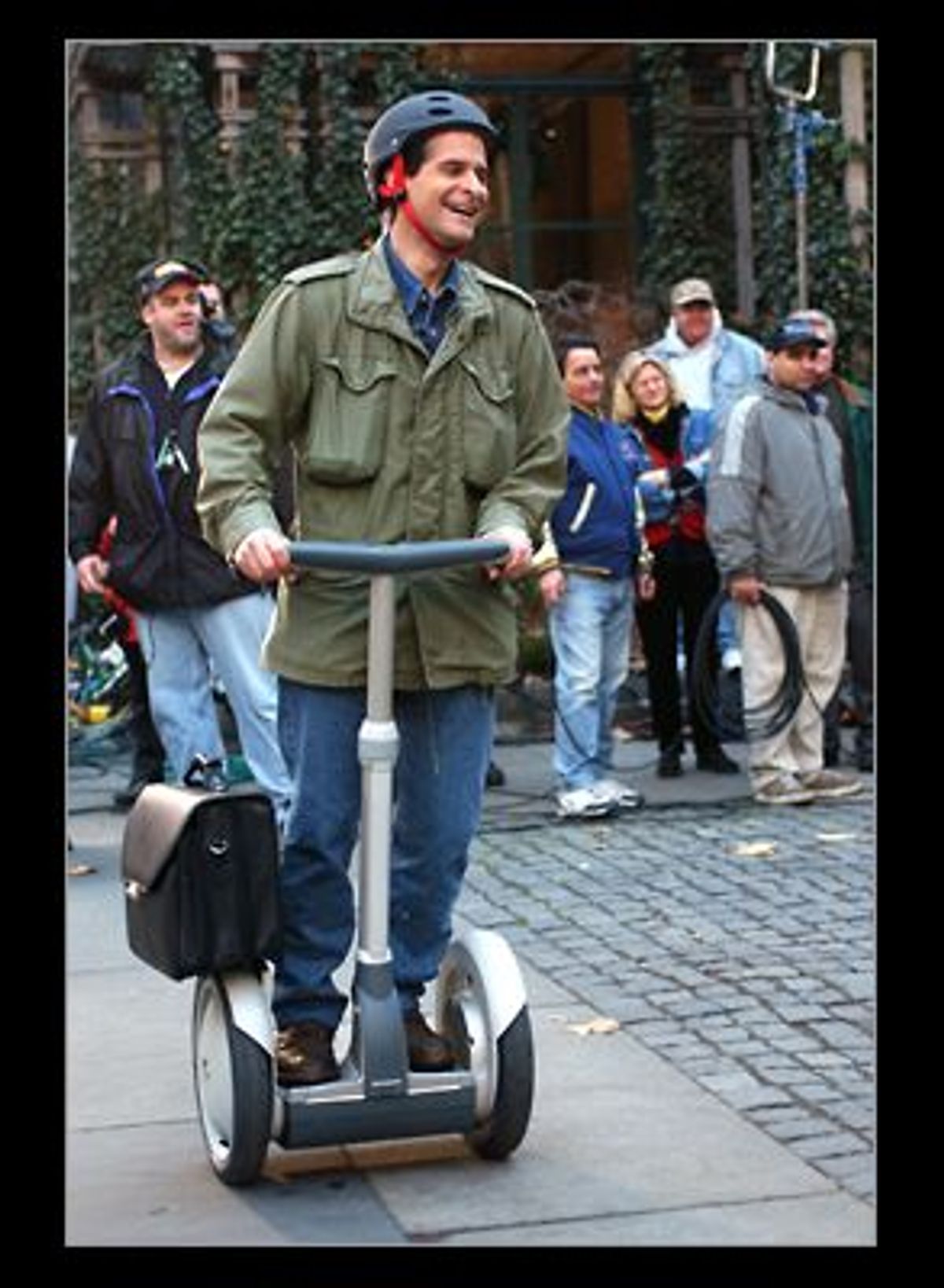 Dean Kamen readily admits that his Segway Human Transporter, unveiled Dec. 3, is not the futuristic answer to his nation's transportation woes, crowded highways and poor public transit, nor will it replace the SUV, the bus or the commuter train. The push-lawnmower-size scooter travels only 12.5 miles per hour with a 17-mile range between charges. It will have no impact on air quality nor will it reduce the reliance on fossil fuels.

What it will replace is walking.

Kamen, the holder of more than 100 patents -- mostly lifesaving medical devices -- holds that walking is a remnant of the Dark Ages, an unpleasant time-waster that technology need eradicate. The irony is that Kamen, the inventor of Dick Cheney's heart stent, is also the creator of a device likely to increase the instances of heart disease.

Whatever his beliefs, Kamen should have a big, fat market for his new invention. Americans, in general, are loath to walk, which may help to explain why 27 percent of us are obese, according to the Centers for Disease Control. A nationwide Personal Transportation Survey reports that the number of trips taken on foot dropped by 42 percent in the last 20 years. The main reason for this is our suburban-commuter lifestyle, where virtually nothing is within walking distance. As for cities, a stroll around most downtowns is likely to leave you cold, as ground-floor shops have been replaced by the cool steel and glass of skyscrapers. Modern American cities, where Kamen envisions his Segways having their greatest impact, are designed for the automobile, not the pedestrian, so Kamen predicts his invention will ultimately lead to a rethinking and redesign of cities where cars become subordinated to scooters. Grandiose, maybe, but then they laughed at Edison.

Kamen positively gushes at the idea of rendering walking obsolete. "When you stand on this machine it kind of walks for you," he told "The Today Show." He is not alone in his enthusiasm. The networks, news magazines and major newspapers have all joined in the hype, as have some big names of the high-tech world. Bigger than the PC, said Apple's Steve Jobs. Bigger than the Net, said Kleiner-Perkins' John Doerr. Though not, presumably, bigger than our sedentary butts will be.

When Kamen says, "[A walk that] used to take you half an hour will take you 7, 8, 9 minutes," one is reminded of the scene in Saint-Exupery's "Little Prince" where the prince meets a merchant who has invented pills that quench thirst. When the prince asks why such things are needed, the merchant explains that the pills will save a person time, to which the prince replies that if he had the extra time he would use it to take a leisurely walk to a spring of fresh water.

Be that as it may, able-bodied Americans will soon have the opportunity to purchase their very own two-wheel human transport system for the low, low price of $3,000. The federal government is already on board for several hundred at $4,000 a wheel. Soon obscenely fat postal workers and park rangers across the nation will be scooting around perspiration-free.

Almost 150 years ago, in his essay "Walking," Henry David Thoreau wrote, "I think that I cannot preserve my health and spirits, unless I spend four hours a day at least -- and it is commonly more than that -- sauntering through the woods and over the hills and fields, absolutely free from all worldly engagements ... When sometimes I am reminded that the mechanics and shopkeepers stay in their shops not only all the forenoon, but all the afternoon too, sitting with crossed legs, so many of them -- as if the legs were made to sit upon, and not to stand or walk upon -- I think that they deserve some credit for not having all committed suicide long ago." Which calls to mind another fictional episode, this from "The Simpsons," where Homer considers swallowing a suicide pill rather than suffer a long walk through Mr. Burns' mansion.

It is difficult to know what impact Kamen imagines the Segway will have on our car culture. One minute he tells Time the scooter is not a replacement for the automobile, the next he says it "will be to the car what the car was to the horse and buggy."

Truly what is needed is not another gizmo that provides otherwise healthy men and women with another reason to remain sedentary, but more sidewalks and walking trails, safer intersections, the reappearance of street-side shops and sidewalk cafes that once made urban walking enjoyable, and flatfoot cops on the beat that made that sauntering safe. What is needed are bicycle lanes and routes like the ones you still find in European cities. It is unfortunate that a man as ingenious as Dean Kamen has dedicated the last decade to working to make walking obsolete, when he might have put his considerable intellectual gifts toward creating something to improve, not diminish, the quality of life.