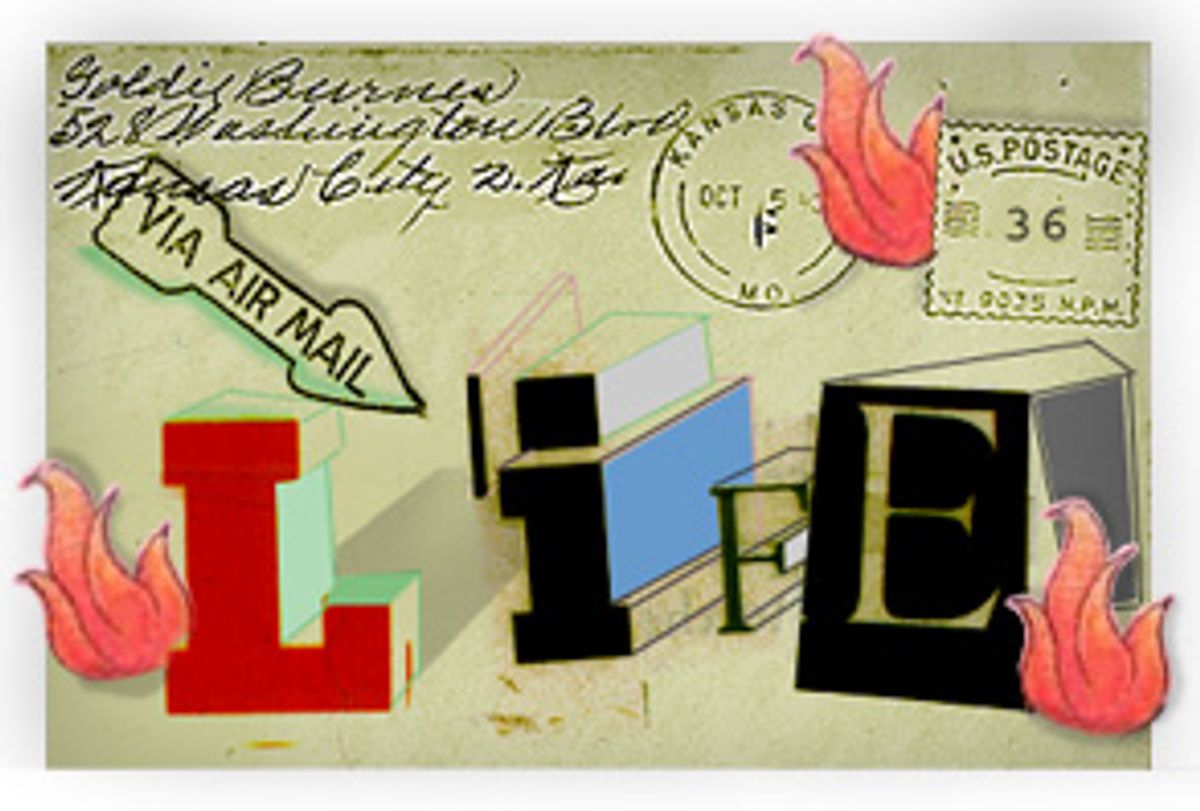 Since I became a motherless child at 3, I know exactly what the WTC motherless kids are going through. My mom died in an auto wreck, leaving four kids under 8 years old. The youngest was 6 months old. We lived in a strange, dark limbo of sadness and depression. There was no extended family support, schools were not supposed to meddle in family matters and back then people acted embarrassed about death. When you are a motherless child, there is a permanently enormous hole in your being that can never be repaired. I pray that these families can find their way through this tragedy.

I never write letters of this sort, but upon reading "Widowers' tales," I feel I must. I, as well as everyone else, have had such a strange mix of emotions regarding the events of Sept. 11. The grief is overwhelming. Reading this article has stirred up yet another utterly lonely feeling. The men who are affected by this tragedy, as well as the children, have opened a door they never even knew about, and I am devastated by their new and sober reality. Thank you for such a deeply touching story.

As usual, Salon has found an unexplored angle of an important story and has presented it profoundly and memorably. A very moving article.

So from this article on Sept. 11 widowers, we learn that Salon believes that men are still the inferior parents, and that in any situation where men and women behave differently -- in this case, grieving -- the way women behave is the correct and proper way, and the way men behave is flawed and wrong.

Fantastic piece. It really added another dimension to this tragedy that I never even thought about.

As a working father, my life would cease to exist without the work and love of my stay-at-home wife. I can't imagine the shock these men feel now.

Like most men, I was taught to be strong in matters of emotion. But my eyes watered more than once while reading this story. How could they not? Crying for these men isn't a sign of weakness for guys -- it's a sign of humanity. You're simply not human if you don't feel for these men and their families.

Again, fine story -- one of the better doses of literary perspective I've read this year.

Your article on the difficulty these widowers are having caring for their children was heartbreaking in a way that brought the loss home to me more than anything before. Their real and personal tragedies made me hurt all over again for all those thousands of families who had someone stolen from them so unexpectedly and cruelly.

But it also made me think about how it's time for our society to change. Why have we still not gotten past these outdated and useless gender roles? It's time that fathers took an equal role in the parenting of their children, and it's time employers (and everyone else, including their wives) let them. I certainly don't place any blame on any of these poor, hurting fathers who are doing everything they can now to be both father and mother to their kids. Their kids will someday understand that they are true heroes.

But if our society could get past the idea that fathers are for bringing home money and fixing the kitchen faucet, and mothers are for giving the baths and feeding the babies and putting the kids to bed (often on top of a full-time job), things would certainly be easier when a family loses a parent or is broken up by divorce. Fathers need to know how to do what a mother has traditionally done. They need to know how to feed their children, brush their hair and keep them secure in their routines. And they need to not just know it, but do at least half of it every day, so that children know that both their parents can care for them just as effectively. The devastation of Sept. 11 makes that all too clear.