"Hey, George: Go back to the E.R. before Frank sends you there! Yo, Brad: Dino could spit you out like an olive pit!" 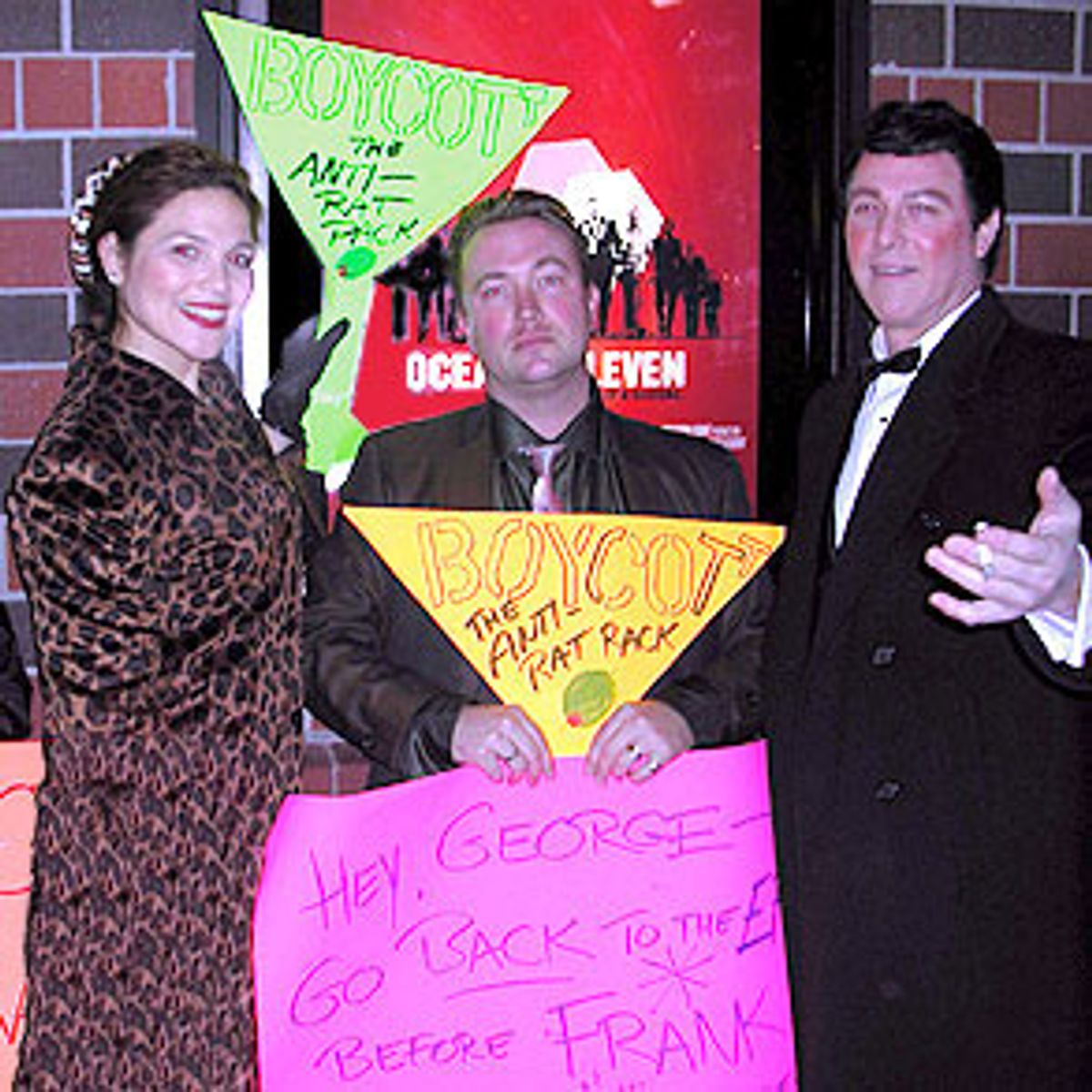 At a moment in history of unprecedented encroachments on civil liberties, and in a city plagued by poverty, crime and complaints of police corruption, a handful of citizens took to the streets Friday to vigorously protest the remake of a mediocre old movie.

As protest mastermind Will "the Thrill" Viharo tells it -- yells it -- Steven Soderbergh's "Ocean's Eleven" is the last straw in Hollywood's systematic and shameful plundering of holy cinematic history. Viharo is a movie nut, but more than that, he's a Rat Pack nut, and the 1960 version of "Ocean's 11" is sacred territory.

Beginning at 6 p.m. on Friday, he, his wife, Monica, and a few others positioned themselves in front of Oakland's Jack London Cinemas and began shouting at passing cars. The cars occasionally slowed down and asked why they were being shouted at. They're robbing our past, the protesters explained. These new guys don't know the first thing about "cool," and yet they're trying to remake a movie that's about nothing else.

Putatively Viharo and his acolytes are devotees of cool. "We celebrate the lost art of being cool," he says. As a professional rep theater host at the Parkway theater and full-time lounge lizard, his love for '50s and '60s culture translates into a love for cool. The problem with this conceit is that Viharo himself couldn't be further from cool. He's got the accouterments -- the shoes, the jacket, the vocabulary -- but ultimately he's a film geek in Frank's clothing: Name a B movie and Viharo will tell you who manufactured the monster's fangs. More to the point, anyone so vociferous on the rules of cool, well, that's not cool.

Viharo would probably be happy to admit he doesn't cut the mustard. He may have a slick wardrobe, but his real devotion is to simply being devoted. There are just as many framed black and white headshots in his home as you'd imagine -- Yvonne Craig, Deborah Walley, Stella Stevens. Where there aren't head shots there are movie posters. Somewhere in the middle is an old placard that says, "It's Frank's world -- we just live in it." Two days before the protest, Viharo wears an evening jacket and slicked-back hair. He's bulldog-stubby. For guests, he has a rum and Coke ready to go.

He's also a talker. Within two minutes I know the story of his marriage. Viharo had been hosting a screening of "Jailhouse Rock" when he pulled a pretty brunet up on stage from the audience. He and his "permanent lovely assistant" were married by a Dean Martin impersonator. The original "Ocean's 11" screened in the background. I've since met the impersonator. He looks just like Dean Martin.

On Viharo's coffee table are poster-board signs cut into the shape of martini glasses for Friday's protest: "Hey George -- go back to the E.R. before Frank sends you there!" And "Yo Brad -- Dino could spit you out like an olive pit!"

"The remake is an insult to their legacy," Viharo says. "The original 'Ocean's' cast were genuinely cool. They were basically just playing themselves. These [new] people are just acting."

Viharo isn't generally bogged down by self-doubt. He prefers talking to listening, and if you propose that, say, George Clooney et al. are "just acting" because, in fact, they're just actors, he puts a hand up and talks louder.

He may have the disposition of a man whose culture has been stolen, but it wasn't his until he himself stole it a few years back; Viharo is candid about his self-invention. He's been a lounge lizard all his life -- he was born in 1963 -- but it took a while for him to discover this. There was a beat period in the '80s, for example (one assumes it was Neal Cassady photos instead of Jayne Mansfield in those days).

The epiphany came at a Rat Pack reunion he attended in 1988. Something clicked, and he began easing himself into a new "personal style." He bought his first sharkskin jacket in the early '90s. In 1993 he wrote a detective novel, "Love Stories Are Too Violent for Me." Then, in 1997, he was asked to host a midnight movie series at a rep house, and "Will the Thrill" was born.

"In my 20s, life was like a tragic poem. Now it's like a comic book," he says. "This is an identity that I created for myself."

Like all good self-made men, Viharo has a blind spot. In a living room punctiliously appointed with Hollywood starlet photos, stacks of old records and other '50s and '60s paraphernalia, he sees no irony in protesting the idea of remaking. Ask him if he himself isn't a remake and the hand comes up again.

"Do you like the Beatles?" he asks, leaning forward.

"Well, how would you like it if they remade 'A Hard Day's Night'?"

This is the closest Viharo comes to explaining the difference between an homage and a shameless plundering of the past. He's too close to the subject to be even-tempered about it. "I take [the remake] personally," he admits, "though I know it's not personal."

People who know Viharo from his work at the Parkway either love him or hate him. It's harder to find the ones who love him. His introductions to films tend to go on and on, and there's rarely a shortage of sermonizing or pretension. He's unapologetic about this. In his Web site he writes:

Honestly, I don't get many complaints at all about my modest stage show or the offbeat film selections -- all booked by me personally -- but if someone out there would rather see the film sans the pre-show: TOUGH! Without me, none of these films would ever play The Parkway and in many cases, wouldn't play anywhere!

There could have been something funny about a tough crew like Frank, Dean, Sammy and the other "Ocean's 11" scrappers needing eight movie geeks to protect them on a Friday night. In fact, the Rat Pack themselves probably would've laughed, if they're anything like their characters in the movie. Fortunately, the guardians of their legacy aren't encumbered by humor. It's serious business in front of the Jack London theater, and the protesters are happy to explain why.

"It's an insult," a bearded man in his 50s says. He's the oldest -- none of the others looks over 40, and a couple might be college students.

"They're destroying a piece of history," Viharo says, testier than he'd been in his living room. When I ask how, exactly, the new film destroys the old one, he begins to yell.

"How would you like it if they remade 'A Hard Day's Night'?"

A few feet away, a scruffy young kid on a dirt bike is asking Viharo's wife, Monica, what all this is about.

"They're ruining a great old movie," she explains to him with a sigh.

He stares up at her.

"What's your favorite movie?" she asks him.

"Well, how would you feel if someone remade 'Batman II.'"

Later, I talk with an older man named Mark Klein. Klein has just come out of the Soderbergh version.

"Both movies were pretty dumb," he says, remembering the original. He's not impressed with the spectacle in front of him, either. "These young people used to protest war ... I can't believe it's come down to this."

The Dean Martin look-alike, Robert Ensler, is nearby in a tuxedo. He seems to be wearing a lot of makeup, too. He tells me what a disgrace this new movie is, no style. Will he ever watch it? I ask. No way. They all say that: No way.

I press my devil's advocate position:

"I'm a Dean Martin impersonator," he says. He doesn't see what I'm getting at.

"What's the difference between impersonating Dean Martin for a living and remaking 'Ocean's 11'?"

He looks around for help and Viharo comes over.

"You're a tribute," Viharo coaches him. "A tribute."

"An homage," Viharo tells him.

Yes, well, ironically, several people asked if Viharo's stunt in front of the theater was a promotional event for the Soderbergh movie. As for the sympathy for the original film's slighted stars, Angie Dickenson seemed happy enough to do a cameo in the remake. And in a perfect twist worthy of the original "Ocean's 11," the slick new remake is better than the first. It's snappier and more suspenseful, and that George Clooney could stop a clock. Sure, Las Vegas has changed and fans of the Rat Pack will indeed find that the Rat Pack is not in this movie. But generally it's more fun than yelling at cars, and who knows -- maybe some kid on a dirt bike will eventually grow up to sermonize about the good old days of Brad, George and Julia.