The women behind the women of Afghanistan

Hena Efat was smuggled into the Afghan Women's Summit; her plan is to go home and fight some more. 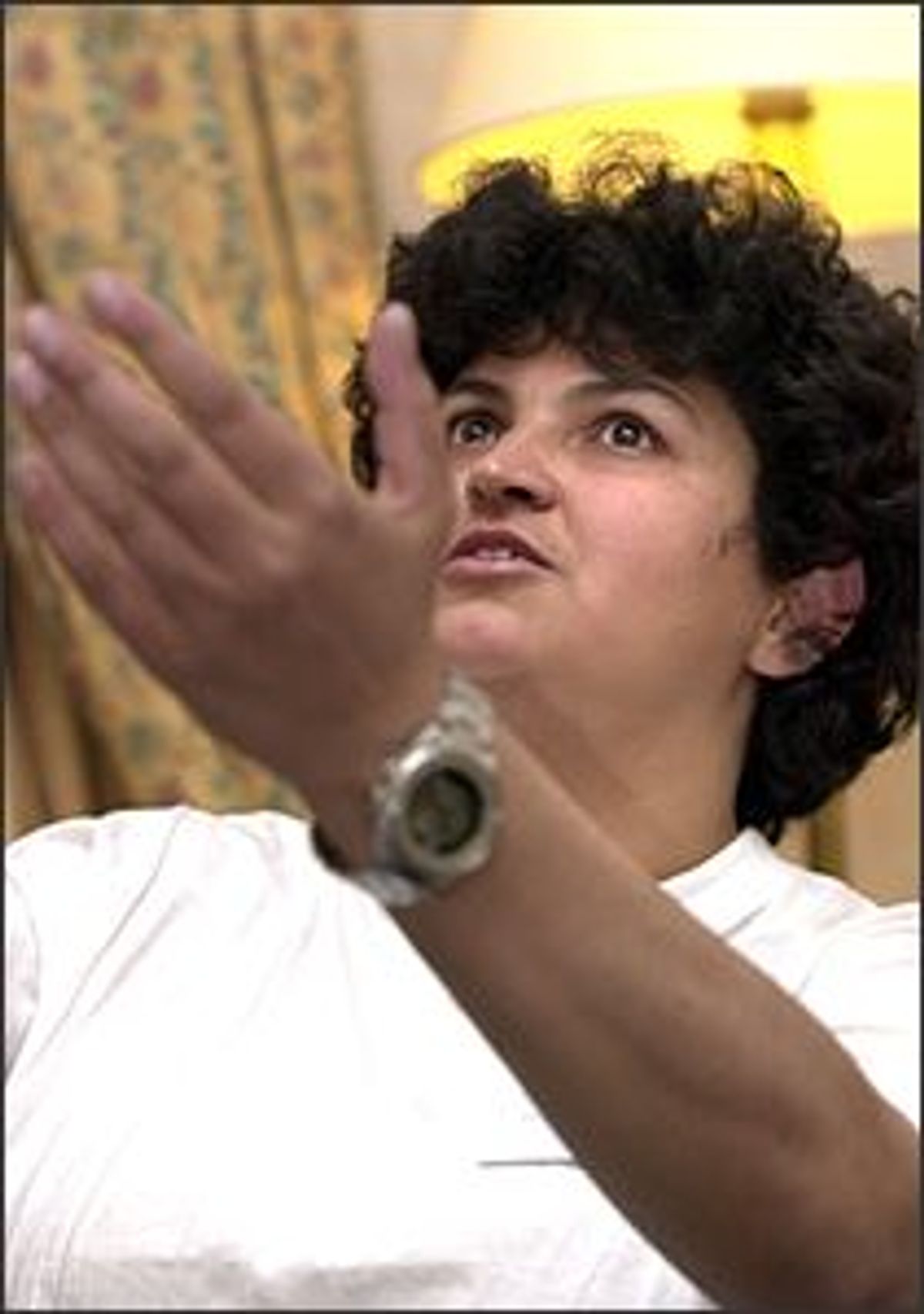 It's hard to believe that 25-year-old Hena Efat ever wore a burqa. Stocky and dimpled, with short curly hair and a wardrobe full of T-shirts and baggy suits -- definitely no veil on this girl -- she dresses and acts like a Western tomboy. She's eager to slap me five and demonstrate the various ghetto-style handshakes that she's learned from British travelers that she met in Kabul. It's hard to believe that this visit to Belgium is her first trip outside of Afghanistan, but it's true: Until she left Kabul three weeks ago to attend the Afghan Women's Summit, she had never left her country.

In fact, Efat is so ebullient -- constantly cracking jokes in broken English, impatiently pounding rhythms on the table with her fists, interrupting her translator -- that it's difficult to imagine that she ever lived under the Taliban at all. But her enthusiasm, while genuine, is also misleading: Her family suffered under the Taliban as much as any other in Kabul. Yet somehow, like so many young Afghan women at the Brussels gathering, Efat draws strength from her experience of misery. She is not beaten down, but energized, ready to face the daunting task of making sure that women are included in rebuilding the country.

Efat, a Tajik by heritage, was born in Kabul as the daughter of a furniture maker; growing up, she had three sisters and five brothers. Her father died when she was 10 years old, making her mother the main breadwinner for the family. In order to assist her family financially, Hena started her own business in the eighth grade, organizing and supervising a workshop of women dressmakers in her after-school hours. (Though it sounds bold in the context of what most Americans know about Afghan women, Efat's entrepreneurial feat was perfectly normal for women in the relatively liberal days of the Communist regime, before the mujahedin forces took over in 1992.)

Efat's family's troubles began before the Taliban marched into Kabul in 1996, pushing the violent mujahedin forces out of power. Her brother was a resistance fighter during the days of the Communist regime; he was assassinated for his beliefs, she says. Later, when the mujahedin began bombarding Kabul, during the power struggles between feuding warlord factions to control the city, she lost a second brother in a stray rocket attack.

It is when she speaks of her two brothers that the toll of the last few years is evident in her voice, and she begins to cry: She's told this story many times in the last few days, she says, but she still gets choked up thinking about it.

By the time Efat graduated from high school and entered medical school in 1993, the Taliban were coming to power. She managed only six months of studies at Kabul University before the Taliban banned education and work for women. Forced to give up her studies, and forbidden to hold a job, Efat secretly volunteered at a local hospital, hoping to get training, until finally even that option was cut off. It simply became too dangerous.

She begins to lose her composure again as she recalls an incident from that time. An injured mother and child were brought to the hospital: The mother had been hit by a car as she ran, in her burqa, to take the sick child to see a doctor. The mother had a broken spine and several broken bones, but the Taliban turned her away from the door of the hospital: They had capriciously decided that women were no longer allowed to be treated at the hospital. "They forced the woman to leave the hospital in that condition without any help," Efat recalls.

Even in these conditions, while those around her fled the country, Efat and her family stayed behind in Kabul -- for financial reasons, but also a simple love of the country: "I had the opportunity to leave, but I decided not to, because if I did not stay who would stay and build the country?" she explains. "It would be like abandoning Afghanistan."

Remaining in Kabul, Efat got involved in an underground network of schools, becoming a coordinator of a program that provided secret education to hundreds of young girls in the homes of former teachers. Her group was supported, in part, by the Afghan Women's Society, an association run by Afghan exiles living in the Netherlands. In this role she had her most dangerous encounter with the Taliban, when they took notice of the heavy traffic of young girls in and out of teachers' houses. Eventually, they marched into the informal classrooms and literally broke up the school.

"They came in and started breaking chairs and tables and our blackboard," says Efat. "I got so mad, I had to do something, so I stood on a chair and hit the Taliban as hard as I could. They began hitting me with a cable, and I fell off the chair and badly fractured my leg." She adds proudly, "The doctor said I shouldn't walk for six months, but I got up in two months and started teaching again, in a new location."

Now that the Taliban has been evicted from Afghanistan, Efat hopes to pick up her medical education where she left off. At the moment, the universities show no sign of reopening, but she is already planning what she'll wear when they do. She plucks at the clothes she's wearing -- a suit of thin black cotton with a dressy silver pinstripe that she purchased recently in Peshawar -- and says, "It's nice for a meeting, maybe, but maybe not for university, I think."

Efat left Kabul for Peshawar just before the Northern Alliance marched in: She was identified by a group of exiled Afghan activists, some of whom she had worked with in Kabul, as a prominent human rights leader. In order to get her to the Brussels summit, the organizers had to send a message by word of mouth -- she has no telephone -- and then smuggle her over the border into Pakistan. With no passport or official documents, she had to spend three weeks in Peshawar waiting for special permission from the Belgian government to enter the country.

Considering that she's a woman who is so clearly infatuated with the West -- seemingly making friends with every foreigner who passed through Kabul in the last 10 years -- it's a shame that her first trip to Europe hasn't been one strictly for pleasure. Efat has been so busy in meetings that the only glimpses she's had of Brussels have been through the windows of the bus that hauls the women participants from the hotel to the European Parliament to restaurants for their meals.

But she doesn't seem to mind much; like the other women here, she seems far more concerned with the issues awaiting her back at home. Efat doesn't consider herself particularly political -- as she says, "I just want a government that provides the things the Afghan people need, and gives women the rights they deserve." Instead, her time here in Brussels has been spent constructing guidelines for a new health infrastructure for Afghanistan.

"We need to build hospitals, clinics, give vaccinations, do AIDS prevention. There is also a big problem with addiction to heroin, we need to see a provision for that," she says. "Another issue which is very common is that people use expired medicine, since they have no access to medical help; this is very dangerous, and sometimes the consequences are deadly."

Her greatest concern, however, is for the children she has worked with in the schools for the last six years, particularly the children who have been orphaned by the war. "I don't want what happened to us to happen to them. The children are in desperate need of an education, and Afghanistan is not ready for students yet: There are no schools, no buildings, no teachers, no curriculum. We may even have to send them to other countries for an education," she says, though she also adds that she's worried that this might change their personalities.

"We may not be able to help 100 percent of the children, but if even it's a small percent, it's a start," she says in Farsi, and adds in broken English: "They are the future of Afghanistan." Her greatest wish may sound like a cliché to jaded Western ears, but coming from the mouth of someone who has both witnessed and survived so much devastation, it also has the poignant ring of foresight. Tomorrow: Forbidden to work at home, she is a doctor in Pakistan's refugee camps