A mythologizing biopic about a junkie playwright, thief and con man. The movie's a con, too. 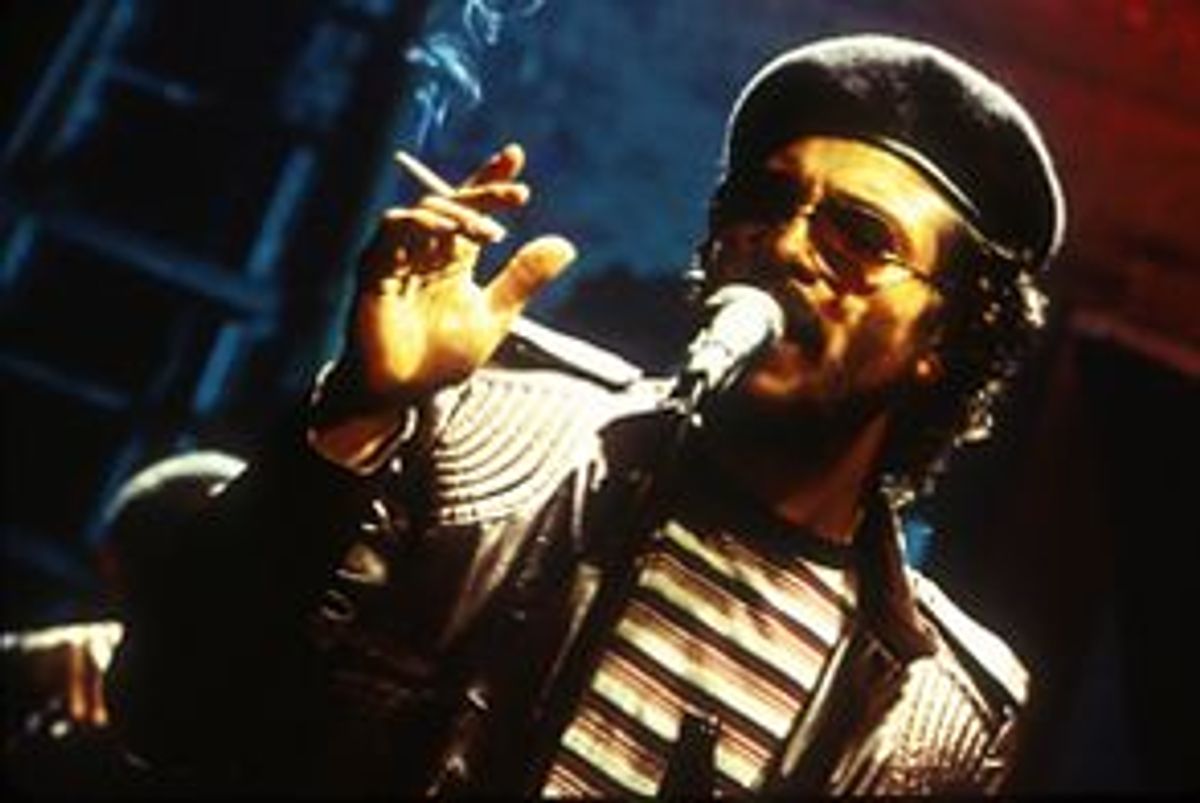 George Orwell's famous line about saints can also be applied to artists who claim to represent the gritty authenticity of the streets: They should be judged guilty until proven innocent. And so should the people who mythologize them. "Piñero," writer-director Leon Ichaso's film about the Latino junkie-playwright Miguel Piñero, is a sustained piece of showboating mythmaking, and something of a snow job.

Piñero was a drug dealer and stickup man who, during a stretch in Sing Sing, developed the prison drama "Short Eyes." Joseph Papp, the director of New York's Public Theater, premiered the play, which went on to Broadway and six Tony nominations (a film was made in 1976). Piñero continued to write plays and poetry. He co-founded the Latino showcase Nuyorican Poets Cafe, and he acted in the movies and on shows like "Baretta" and "Miami Vice" (often in the sort of stereotypical roles he chided in his written work). Piñero also continued to be a junkie, and to resort to stickups and muggings to support his habit. By the time he died of cirrhosis in 1988 at the age of 40, he was reduced to living in a dilapidated van with a prison pal.

Ichaso avoids the cliché of showing Piñero either corrupted or redeemed by success. He's a junkie and a thief from the minute we lay eyes on him, and fame doesn't change that. On the night that "Short Eyes" has its premiere at the Public, the movie shows Piñero (Benjamin Bratt) and his buddy Tito Goya (Nelson Vasquez) mugging a pair of women for their fur coats in Times Square. He's as quick to hand a wad of cash over to save a Latino couple's bodega as he is, when he needs a fix, to rob a convenience store. He doesn't recognize the contradiction.

But Ichaso has avoided one cliché only to fall headlong into another. "Piñero" depicts the playwright as a sort of Latino Genet, a man whose amorality is pure because it's unaffected by what we're meant to see as the hypocrisies of bourgeois society. Which is how Ichaso gets away with portraying Joseph Papp (played by Mandy Patinkin) as a pompous white culture vulture who uses Piñero to convey glory on himself. When Papp fires Piñero from the lead in Reinaldo Povod's play "Cuba and His Teddy Bear" because Robert De Niro has agreed to take the part, his explanation that De Niro has greater drawing power is meant to be taken as proof of venality corrupting his commitment to art.

But even as you sense what the movie isn't telling you about what Papp had to put up with from Piñero (and even as you're aware that Ichaso doesn't even have the decency to acknowledge that Papp is probably responsible for the emergence of most of the significant American playwrights of the last 30 or so years), you wonder why Papp put up with him for as long as he did.

In one scene, Piñero refers to himself as a "junkie Christ." That's pretty close to the movie's view of him: a rebel who couldn't conform to success (i.e., kick his drug habit, stop robbing people and settle down to the rigors of work) because that would mean losing his street cred. And who knows? There may still be an audience willing to swallow this romanticized view of the street thug as doomed, tortured artist.

But despite the godawful mess of the movie's structure, it's all too clear what the movie isn't telling you. In one scene Piñero and Tito rip off a group of dealers; Piñero kidnaps the hooker who is servicing one of them. In the next scene, he's taking leave of Tito and we hear the woman crying in the back of the car. She's obviously been traumatized, but we haven't seen what happened, and it's embarrassingly obvious that Ichaso is trying to keep from telling us what has happened to her.

Nothing reveals Ichaso's intentions more than the casting of Benjamin Bratt as Piñero. The real Miguel Piñero was a scrawny and not especially handsome little guy. Bratt, who has a movie star's good looks, fulfills Ichaso's beautiful loser fantasy. I enjoyed Bratt's sleekness on "Law & Order," and in his bit part as a dope dealer in "Traffic" he brought that overly earnest movie a much-needed flash of sleazy energy. Here, he seems to be apologizing for being easy on the eye, and he does it by falling into the actor's fantasy of strutting his stuff by playing a lowlife (though with his beret and beard and flowing curls he looks more like a matinee-idol version of Che Guevara).

Bratt shucks and jives, he blows up, he nods off, he affects the shambling, rolling gait of a junkie-pimp. It's a showy, inauthentic performance, the type of thing you might see an actor do in a showcase designed to impress potential employers. That might have worked to the movie's advantage. There's no distance between the Latino outsider routine that Bratt's Piñero affects in his poetry readings and the hustling bullshit artist he is offstage. But Bratt can't build on that irony because he's bought into Ichaso's adoring view of Piñero's affected thug-artist routine.

The sheer incompetence of "Piñero" is that it fails to make a case for the talent of the very man it's lionizing. From what we see, it appears that his plays descended from genuine grit to pulpy street fantasies designed to offend bourgeois audiences (and thus prove their legitimacy by the fact that people took offense). And his poetry readings -- part performance art, part poetry slam, part street-corner strut -- are embarrassing in their amateurishness.

The poetry is a clumsy mélange of ethnic pride, half-baked political protest and gutter rot, far too self-conscious and pleased with itself to have the charge that, say, Charles Bukowski was sometimes capable of, or the lyricism you sometimes hear in the work of the poet Quincy Troupe. (Naturally, the production notes cite Piñero as a precursor of rap and hip-hop. Somewhere, Gil-Scott Heron is laughing.)

Those performance scenes, though, are the model for the movie's structure. Ichaso has made the classic mistake of trying to relay a story as if it were a piece of jazz, and mistaking the discipline in jazz as permission to do whatever he feels like. The jumbled time frame and fragmented scenes (many of them meant to look improvised) jerk by in hand-held camera work and a constant, meaningless shifting between color digital video and 16mm black-and-white. In some ways, this shambles is the smartest move Ichaso makes. If the movie were told in a straightforward manner, the motivation Ichaso provides for Piñero would be revealed as thin and conventional.

According to the movie, it was Piñero's molestation at the hands of his father and the man's abandoning the family that started Piñero on his life of crime. (It's easier to feel for that bastard of a father, played by Jaime Sanchez who, in 1969, was Angel in "The Wild Bunch."

The image of the young, beautiful Sanchez from that film contrasts with the pudgy older man now before us, the bags under his eyes carrying the sorrows of the world. (That face says more about dashed dreams than anything else in the movie.) This may well be true, but as presented by the movie, it's a cliché, and it makes Piñero that ultimate fetish object of the bourgeoisie he resented: the object of liberal pity. And the movie never addresses the hypocrisy of how Piñero was all too willing to enjoy the luxuries that bourgeois society had to offer while playing the role of pure artist.

"Piñero" may invite comparisons with "Before Night Falls," Julian Schanbel's lush film of the Cuban novelist and poet Reinaldo Arenas. But the better comparison would be to the forgotten 1988 film "Weeds," starring Nick Nolte as a con who, by carefully cadging from the work of the writers he reads in prison, remakes himself into a playwright.

The difference is that "Weeds" never shies away from the poseur side of Nolte's character, and because of that honesty it allows us to feel the poignancy of a man's attempt to remake himself. The man "Piñero" depicts has about as much relation to real artists as the guys dealing three-card monte on the street have to social workers. It feels like one long con.