He's gone from Calhoun County, Ala., to Islamabad and back, but the author of "Ava's Man" never leaves his family far behind. 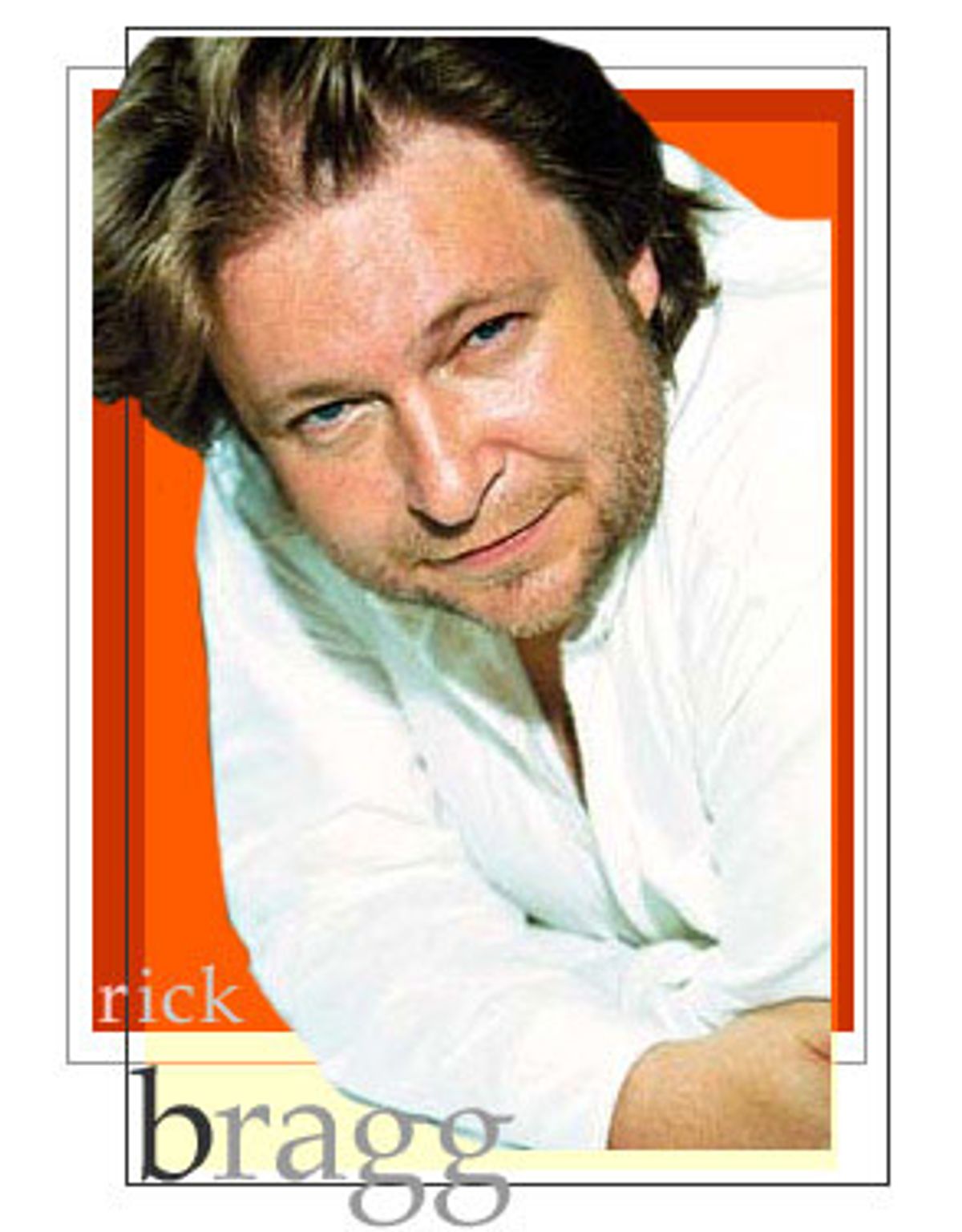 Author Rick Bragg was on a tour of America for his new book, "Ava's Man," when the Sept. 11 attacks occurred. He immediately ended the trip and went to ground zero to chronicle devastated lives, communities, buildings. Soon after, he traveled to Islamabad, Pakistan, as a correspondent for the New York Times. He wrote me while he was there:

"The poverty breaks your heart, as does the hatred here of Americans. People keep telling me it is not widespread, and I hope that is true. Perhaps I have covered too many demonstrations, seen too many shouts of rage, so my view is too narrow.

It has taught me a good bit, but about what I'm not real sure. I'm glad I came, but sorry for the reason that brought me here. There is little of the joy I've had in the past of working on a good story, because it all leads back to September 11."

Bragg's now back from Pakistan, but being in harm's way is nothing new for him. In Port-au-Prince, Haiti, with soldiers barely out of the 12th grade, he witnessed thousands of people thrilled to see the troops who had come to protect them. He wrote of them for the New York Times Magazine in 1994:


They patrol Port-au-Prince in Humvee caravans of two, three and four, guns loaded but not cocked and ready to fire, since this is a peacekeeping mission. The gunners in the turret, the most exposed and most at risk, wear two bulletproof vests. The drivers and navigators keep one eye on their windows, afraid someone will drop in a grenade. And always there are so many Haitians pressing in on them, curious and friendly but so many and so close that the men know they would never see an attacker coming in time.

Before the nightmare that enveloped this country, Bragg recalled a simpler time in "Ava's Man," which is about his grandfather, a man he never knew but built from the memories of family members and friends. From Pakistan, he wrote me, "I have refused to whine about this trip's impact on the book, which was so close to my heart. It seems trivial to worry about dropping off the bestseller list when there are still thousands of people presumed dead. How much has changed."

Bragg once told me about the day in 1982 when he realized he wasn't the man of his young wife's dreams. All 6-feet-plus, 200 pounds of him was sitting in the kitchen of their Calhoun County, Ala., home, eating a fried baloney sandwich and reading the sports pages of the Anniston Star when he noticed the look on his wife's face. She simply couldn't see the man who would eventually win a Pulitzer Prize for journalism. She just saw a guy wearing boxers, scratching his belly and muffling (or not) a burp or two.

"I'm a Southerner," Bragg told me, "but not the gentility. I never pretended to be, never wanted to be."

Neither did his grandfather, Charlie Bundrum. Bundrum is the central figure in "Ava's Man," and is the grandfather who died a year before Bragg was born. "I have never forgiven him for that," he writes in the book.

Bundrum's picture, one of two ever taken of him, stares out from the cover, expressionless in front of totally illogical palm trees. The dime store photograph recalls the time and men portrayed by James Agee and Walker Evans in "Let Us Now Praise Famous Men."

In "Ava's Man," Bragg tells us in detail about the world he grew up in, scarcely altered from his grandparents' world, and, in his family, dominated by his grandfather. Bragg constructed a grandfather he never knew "scrap by scrap," story by story. He writes, "[I] knew almost nothing else about him growing up because no one in my momma's family talked much about him ... I began to wonder if I would uncover anything at all about my grandfather, or if he would just remain a man of secrets I would never know."

Bragg is satisfied he has at least captured the essence of the man. "The one thing I am dead sure of," he writes, "is that his ghost, conjured in a hundred stories, would have haunted me forever if I had whitewashed him. He was, I am told, usually a quiet man, not given to foolishness, who would ride the river in his homemade boats for hours, silent, or sit with a baby in the crook of his arm on the front porch, humming a railroad song ... a man who didn't need a gun to kill you because (if the spirit moved him) he was capable of talking you to death. A man like that, surely, would want a legacy with pepper on it."

Bragg doesn't blanch from a little pepper, either.

"I cain't put on airs," he says in an accent a friend once described as poolhall Southern.

Bragg and I met for lunch in Birmingham last summer and we went to John's, for meat-and-three -- three types of vegetables. There are plenty of French or Thai restaurants from which to choose in the Magic City, but Bragg chose John's, a legendary downtown establishment whose specialties are hush puppies, black-eyed peas and chicken-fried steak -- in other words, a classic Alabama meat-and-three. Everything on the plate -- everything -- was fried or swimming in butter.

Since his youth in Calhoun County, Bragg has lived in Jacksonville, Ala., Anniston, Ala., Birmingham, Ala., St. Petersburg, Fla., Los Angeles and then, as national correspondent for the New York Times, in New York, Atlanta, Miami and now New Orleans.

All of these towns have expanded his culinary tastes, but only by a little. He loves Chinese food but hates sushi -- "It's not bait, but ..." his voice trails off. Martinis "taste like kerosene." After John's, one of his favorite places to eat is Milo's where they drown hamburgers in a "secret" brown sauce and pour orange popcorn salt on the French fries.

Birmingham was the first city Bragg ever saw. Working for the Birmingham News was the choicest newspaper job in the state. Howell Raines, then best known as a Pulitzer Prize winner, had started his career there.

After his tour of duty at the News, Bragg worked at the St. Petersburg Times, and then, like Raines, the New York Times. Early in life, Bragg had served an apprenticeship at the Jacksonville Times where journalists spent their after hours at Dee Ford's, a local nightspot where patrons were checked for knives at the door. If you didn't have one, the local joke went, they'd issue you one.

He covered sports for the Jacksonville paper, and then moved on to covering city politics for the Anniston Star. He credits Randy Henderson, then an editor for the Star (who later hired Bragg at the Birmingham News) with recognizing his strong suit. Since then his job of writing features about real people has pretty much stayed the same, but he's gained vastly more readers.

I didn't grow up knowing Bragg's world, but I knew of it. I was raised 20 miles away from him in Hokes Bluff, Ala., a suburb of Gadsden. Bragg's county was next door, but his upbringing might as well have been on a different planet. My world included swim lessons, church three times a week and the understanding that I would graduate from college. It was easy to spot the children in my class who hadn't been raised with what my mother tactfully referred to as "advantages." I saw the ones who were taken aside by the teachers and given medicine for head lice; I knew about the kids who had worms because they went barefoot all the time.

Bragg is to our time what James Agee was to Southerners of the post-Depression era. Both were of Huguenot ancestry, but as Bragg points out, his forebears would have been the ones who held the horses of Agee's ancestors. Agee's father died, Bragg's father disappeared; both Agee and Bragg grew up in the South, Agee in Tennessee and Bragg in Alabama. Both spent time at Harvard, and both had a deep sense of isolation and loss from their family and society at large. They expressed their despair in lyrical ways and both received a Pulitzer for their efforts. The essential difference between them -- and what gives Bragg an advantage in praising these non-famous men -- is that he saw their lives from the inside.

Bragg knew what it was like to be on welfare, to walk into a Jack's Hamburger smelling like fertilizer and to be on the free lunch program at Roy Webb Elementary.

"Ava's Man" explains why the mother Bragg described so touchingly in "All Over but the Shoutin'" had a spine of steel. "The pivotal figure in my mother's life ... walked large and tall and proud in my mother's memory." Bragg asked his mother and her sisters to describe their father, and they all began crying or left the room. He writes: "What kind of man was this, I wondered, who is so beloved, so missed, that the mere mention of his death would make them cry 42 years after he was preached into the sky? A man like that, I thought to myself, probably deserves a book."

Bragg recalled the people of "Ava's Man" while he was living on the road in nameless, colorless Florida hotel rooms when he was covering Elian Gonzalez and the presidential election of 2000. After a hard day of fact-gathering, he would come back to his anonymous room and "bust out laughing" as he looked over his notes about people who died before he was born.

After the miraculous feat of raising his grandfather from the dead, it took superhuman effort to kill him back off for the final chapters. Still, Bragg even managed to find a little humor as Bundrum was laid to rest. Two preachers were remembering his grandfather in the best possible light and Bragg writes of their efforts: "They praised him as a fine father, which was the gospel, unbending truth, and as a fine husband, which was true mostly and anyway it was a funeral."

Lynda Cardwell is a writer in Birmingham, Ala.