I come not to bury Julia Roberts -- she's doing a good job of that herself in "Ocean's 11." 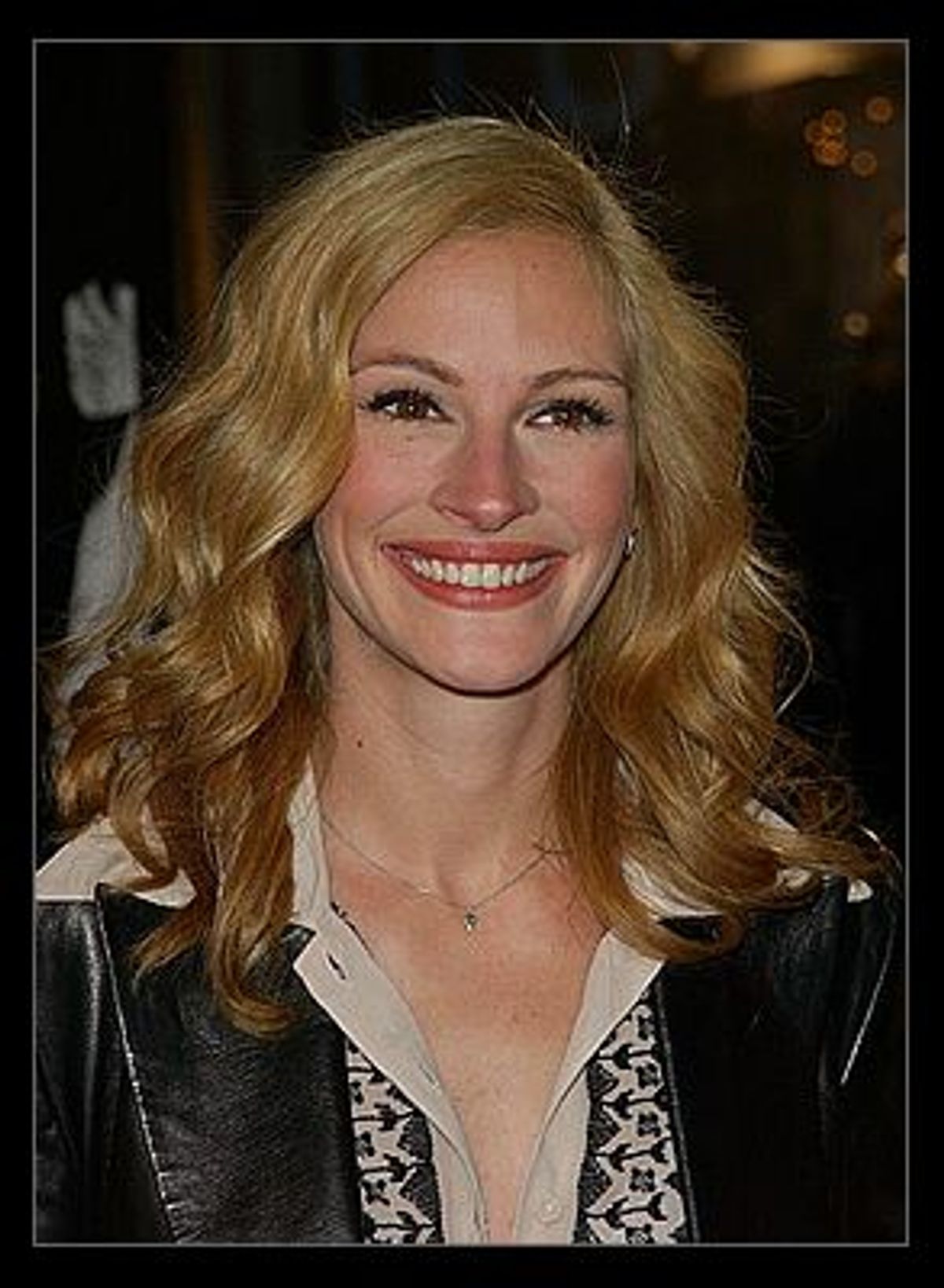 My thoughts in last week's column on Julia Roberts in "Oceans Eleven" prompted a barrage of letters, enough to send most rascals out of their caves. A few of you agreed with me. One writer sent a kind follow-up letter an hour after a fierce rebuke, saying that normally she liked my stuff so "please don't show him what I said" (they didn't, and I thank you). But most of you thought I was everything from a pig to an idiot for thinking such unworthy thoughts of Julia. And I dont rule out the possibility of any of that. Still, there are some matters worth pursuing.

First of all, I'd like to say that I have been a fan of Ms. Roberts. Back in April 1997, I wrote a piece called "In Defense of Julia Roberts" for Movieline. It argued that she had been misunderstood; it stood up especially for her remarkable performance in "Mary Reilly"; and it maintained that, granted a narrow range, she had a true starriness that hardly another woman of her age commanded. Since then, I have admired and enjoyed her work in a few films where she was used admirably -- "My Best Friends Wedding," "Erin Brockovich" -- even if I felt that some of those films were close to absurd. But they asked Julia to do what she is best at -- to be a dazzling, triumphant center of attention, to be lovable and to justify a picture through her mere presence and her smile.

That is not a put-down. It is not just sexist delight in the look of a woman while having no interest in whats behind the look. It is a response to the way movies work. The look, the smile (or the sadness) and the presence were what Lillian Gish, Garbo, Dietrich and so many others had. Those women were fascinating on-screen, and that was all they needed to be.

Since "Pretty Woman," there has been no question about Julia Roberts having that ability. And in her case, youthfulness has been a vital part of it: the overall sense of a young person exploding an older, stuffy, pompous world. But youth doesnt go on forever. There are many walks of life -- from athletics to being a judge -- for which we take it for granted that being young is either 100 percent necessary or 99 percent restricting. Am I really addressing a company of readers who have not yet perceived how youth affects viability in the movies?

Now, I grant that there may be things ethically wrong or questionable or stupid in the way the audience, and especially the American audience, is so ready to discard women once they pass a certain age. And I am more than upset that men like the self-satisfied George Clooney can get away with looking cocky for years and decades when actresses are replaced with fresh babes. But why does that happen? Is it the arbitrariness of the people who make and market films? No, not really. It is because of our response, and that response has never been as intense as it is now when young people are the crucial majority in the audience. Is it a cruel meat market that abandons talented women so that new (and cheaper) ones can be hired? Yes. But that story goes back as far as movies reach, and it has only accelerated a little in the last 20 years.

The point I was trying to make about "Ocean's Eleven" (and it goes back to her two previous pictures  "The Mexican" and "America's Sweethearts") was that Julia Roberts was being misused. "Ocean's Eleven" adores its guys. A Julia Roberts picture should adore her. That may sound crass or elementary, but its true and subtler than you may think at first. Gary Cooper used to say, shyly, to writers and directors on his films, "Just make me the hero." Now, the fact that that idea had dawned slowly in his mind may explain why he was poor company, but it was a hard-earned insight. Gary Cooper would have been lousy as a villain, He was naturally likeable on screen, as very few people are or have been. Julia is in the same category. She is not a great actress who can take on many different personae. She is herself.

And giving her nothing to do only accentuates things like her being something less than the most graceful walker who ever moved across the screen. It also allows us time to see that in repose (as opposed to smile/denied smile/anticipated smile) she can begin to look grim or anxious.

I think that could be happening, and it is a fact of career life, sharpened by the fact that her stardom has been so great that she is one of very few women who have ever earned the same as top men. Another in that limited category is (or was) Demi Moore. What has happened to her lately? Well, she made a few bad films (bad choices, too). She got older (like 38) -- there's no avoiding it. And she may have suffered the rebuke reserved for an uppity woman. Hollywood remains a guys' club where some actors can coast for years while actresses are cut down early if they have got into the big money. Ask Julia Roberts whether she thinks that's true, and whether there aren't people in the business who might be happy to see her brought down.

Grant all of those things and I believe "Ocean's Eleven" was a bad choice for her, a bad move for a delicate career. It's a picture where she doesn't command the show. And being that powerful is the way in Hollywood for an actress to make it past 35, 40 and so on.