"Osama: The Movie" was weird and chilling -- but not in the way the administration said. 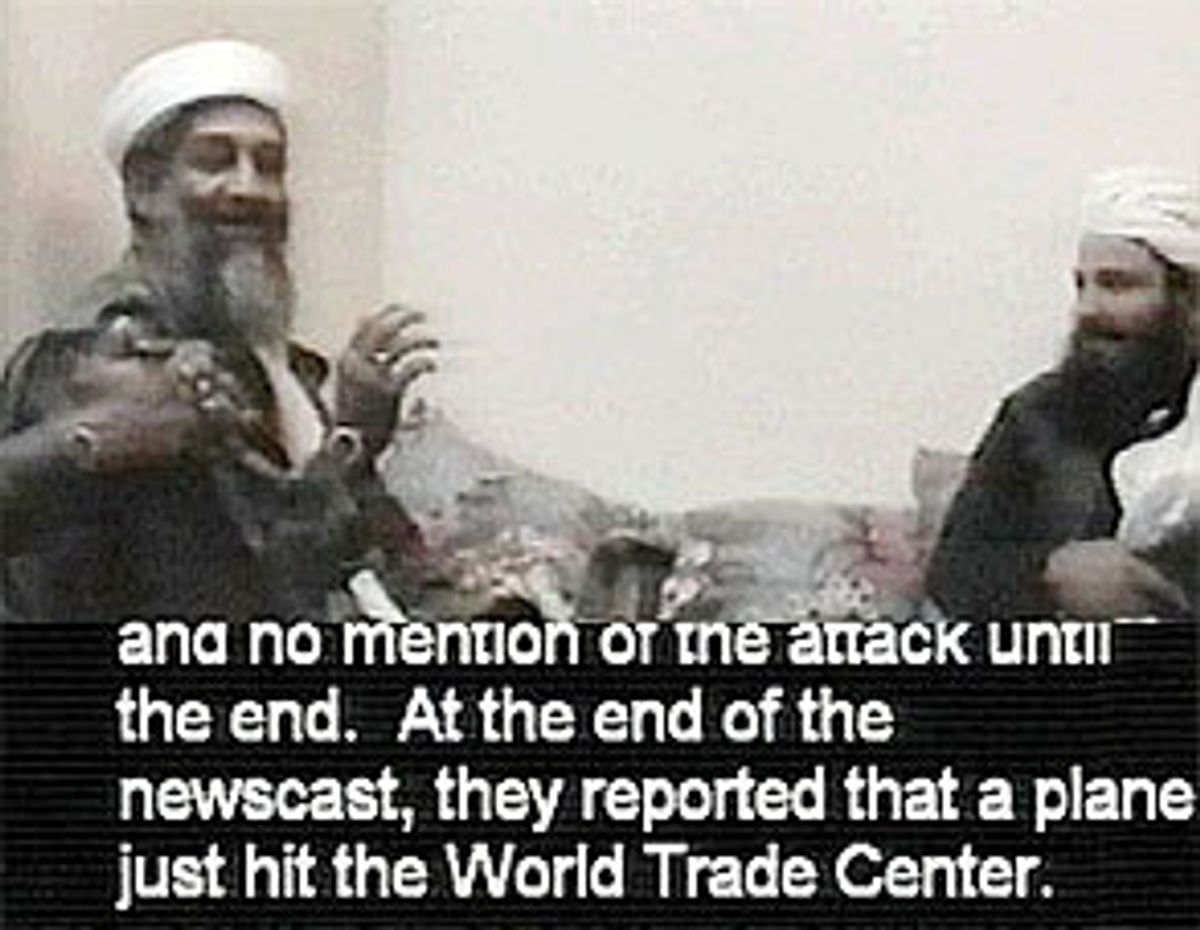 Finally, an Osama bin Laden video the Bush administration wants us to see. Months after it cowed the media into a voluntary blackout on the Saudi terrorist's videotaped dispatches, the White House released to great fanfare the grainy home movie that was supposedly such a blockbuster that two of the three networks and the cable news channels broadcast it simultaneously, sight unseen, in its sometimes-tedious entirety. (ABC broadcast a slightly edited version a few minutes later.) With networks reporting late Thursday that Afghan troops and U.S. special forces have bin Laden surrounded in a Tora Bora cave, the tape could well turn out to be the chilling last words of U.S. Public Enemy No. 1.

According to U.S. officials, the video released Thursday morning is the "smoking gun" that proves bin Laden not only planned the Sept. 11 attack, but laughed about it afterwards -- evidence, in the words of President Bush Dec. 10, that the turbaned zealot "has no conscience and no soul." Secretary of State Colin Powell said after the broadcast: "How could there be a doubt in anyone's mind any longer about what we have said from the very, very beginning, that he was the mastermind, he is the head of an organization that participates in this kind of evil activity?"

But will the video really prove bin Laden's guilt to anyone who still doubts it? And was it indeed so newsworthy that it merited an immediate, hour-long, commercial-free simulcast on every network, before any news producer could take a look at the tape? The answer to both questions is no.

First, the administration vastly oversold the tape during days of hype, when assorted "senior U.S. officials" were telling any reporter who would listen what it allegedly revealed. The video's most damning revelation, according to most news reports, was that bin Laden told his gathered colleagues that some of the hijackers didn't know they were going to their deaths Sept. 11 -- and then laughed about it.

"Administration officials who have read the transcript of the videotape say that Mr. bin Laden seems amused that many of the hijackers in the attacks apparently had no idea that they were on suicide missions," the New York Times wrote Dec. 10. "Mr. bin Laden, they say, suggests that the men thought they were involved in a conventional hijacking." Another "senior U.S. official" told the New York Post that bin Laden "smirks when he says some hijackers didn't know they'd die, too." Surely that would convince even devout al-Qaida devotees that Mr. bin Laden was a manipulative madman, not a holy warrior for Islam.

But the video showed no such thing. The hijackers knew they were on a "martyrdom operation," bin Laden tells his guests, so they knew they were going to die. He then says "they didn't know anything about the operation, not even one letter ... [until] just before they boarded the plane" -- which would seem to mean that while they knew they would perish, they didn't know precisely how. And he doesn't appear to laugh at that point, although to be fair, it's hard to be sure; the scrolling English translation was often out of synch with the spoken Arabic words on the video, and several of his listeners could be heard chuckling throughout the anecdote. Bin Laden does laugh at the end of the story, right after he tells his audience, according to the official transcript, that "those who were trained to fly didn't know the others. One group of people did not know the other group." But it's hard to say for sure that it's the maniacal laugh of a cold-blooded manipulator; it seems more the bemusement of a man whose outlandish plan came off without a hitch. Despicable, but somehow different in degree.

It's hard to know why the administration exaggerated what the video contained, because parts of it are in fact both damning and blood-curdling. It does seem to prove that bin Laden had prior knowledge of the attacks and had probably taken part in planning them. He sounds like the nerdy engineer and developer's son he used to be when he talks blandly about the expected casualties of the attack: "I was the most optimistic of them all ... due to my experience in this field, I was thinking that the fire from the gas in the plane would melt the iron structure of the building and collapse the area where the plane hit and all the floors above it only." That the towers collapsed entirely was an unexpected gift from Allah.

And of course it's creepy to hear him and his posse laugh about Sept. 11. But are we really supposed to be shocked that he was lighthearted about al-Qaida's big success? That he didn't show remorse over the dead? That he had the audacity to eat while bantering about the death of thousands? The official U.S. outrage over the video seems staged and phony -- if bin Laden is as evil as the U.S. says, why would any of this be surprising?

Most of the tape is more interesting as ethnography than as evidence to convince skeptics of bin Laden's guilt. A friend thought it underscored, once again, the banality of evil, but I thought it showed the eccentricity and uniqueness of this particular evil. A long digression about all of the various believers who dreamed some version of Sept. 11 up to a year in advance -- several claimed they had dreams of planes flying into buildings, of a soccer team consisting entirely of pilots, of fighters inexplicably sent to New York and Washington -- was eerily fascinating. Television commentators dismissed those claims as posturing, designed to show a divine hand behind the attacks, but that could be yet another lame U.S. misreading of Muslim and non-Western psychology.

There was some banality, too. You can hear the snorting, chuckling and heavy breathing of the anonymous cameraman, who occasionally drowns out the words of the world's most famous terrorist with his own whispered asides. And the visiting so-called "Shaykh" (who is likewise never identified) is a chubby, chatty sycophant, who babbles on and on about expecting to visit bin Laden in a cave. "I was surprised at the guest house and that it is very clean and comfortable. Thanks be to Allah, we also learned that this location is safe, by Allah's blessings. The place is clean and we are very comfortable." Occasionally, as the men recline on floral bedding and giggle while they share their "Where were you Sept. 11?" stories, they look more like stoned college students in a dorm room, recounting some goofy recent adventure, than stone-cold killers reminiscing about the world's deadliest terrorist attack.

But mostly they look like stone-cold killers, at least to someone who believes in their guilt, as I do. I doubt, however, that anyone who's not convinced by the evidence against bin Laden to date will be won over by the video. If you can believe the Israelis got all 4,000 Jews who worked in the World Trade Center out Sept. 11 so Mossad could pull off the attacks -- a popular conspiracy theory for a while in Muslim media -- then you can easily believe the U.S. rigged this amateurish, hard-to-hear video. For true believers, there will never be a "smoking gun" that indicts bin Laden and absolves the U.S.

So while I'm glad the administration released the video, I question the media's treating it as a stunning breaking news event, broadcasting it commercial-free -- complete with a long, boring, bin Laden-free segment showing some children playing around what appears to be the remains of a downed U.S. helicopter -- the minute it was available, rather than screening it first.

The media already has a lot to answer for in the way it bowed to White House pressure, and refused to broadcast bin Laden's other videos, after showing one he released as the U.S. bombing campaign began Oct. 7. A semi-sheepish cable news director defended his network's mea culpa over broadcasting that first video, telling me his problem with the decision was that his network broadcast it without screening it first, to independently verify its news value. Fair enough. But then why not apply the same standard to this Pentagon-produced extravaganza? In fact, though MSNBC promised to re-broadcast the video Thursday afternoon, by the time it aired, the network had edited out the dull bits, put it in the right chronological order -- and of course, added commercials. It was not the edge-of-your-seat news event it was supposed to be.

The Bush administration mostly deserves praise for the way it has conducted the war to date, but it has frequently bungled the P.R. dimension, and the hype over this tape was bad judgment. Likewise, despite some lefty handwringing over a supposedly jingoistic press, the war has yielded some amazing journalism -- but the handling of Thursday's bin Laden video release is not an example of it.