The film of novelist Iris Murdoch's life suffers from PBS syndrome, but Dame Judi Dench cures with a moving portrayal of life with Alzheimer's. 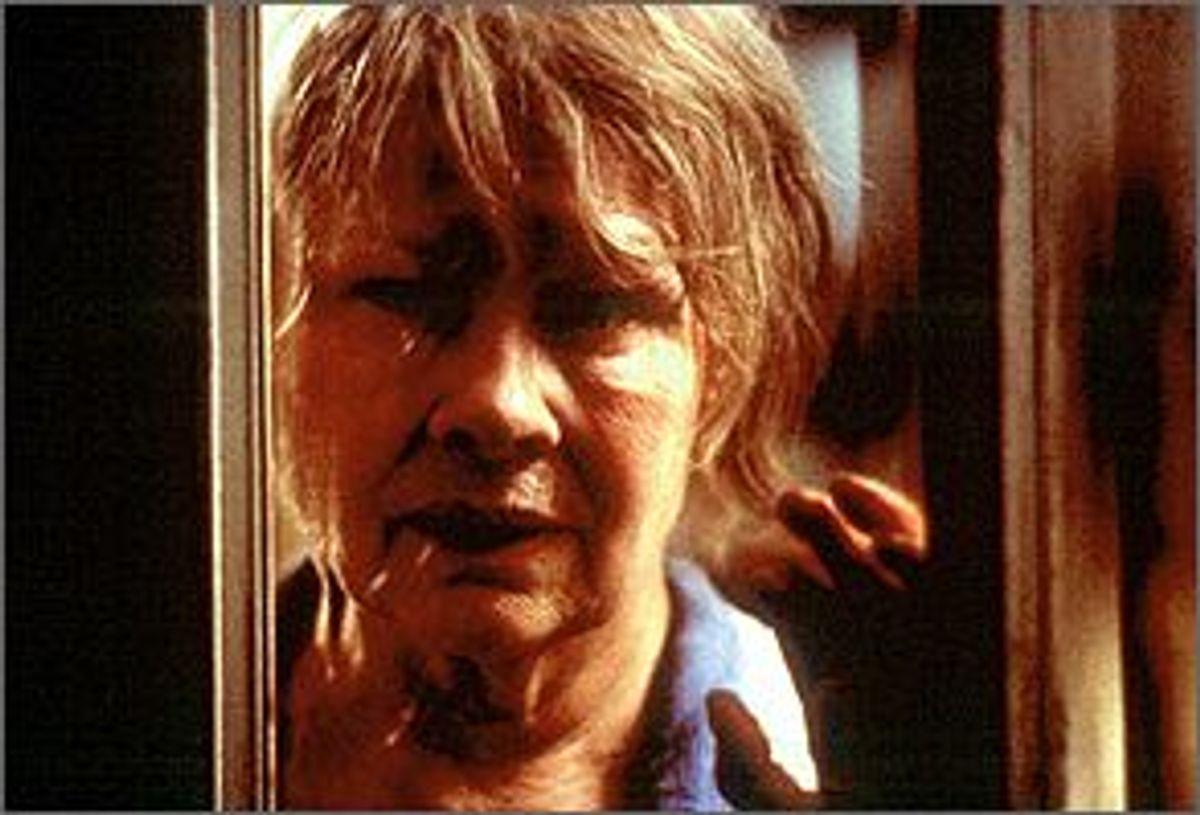 As a biography of the novelist and philosopher Dame Iris Murdoch, "Iris" is hardly adequate. It has little to say about her ideas or her place in literature, except that she was "acclaimed," and it treats her life in a manner that's fragmentary at best. The director, Richard Eyre, has come up with a central motif that's slick rather than penetrating: The older Iris (played by another Dame, Judi Dench) is prone to visions of her younger self (played by Kate Winslet). The moments are rich, largely because of Judi Dench, but Eyre diminishes the impact by repeating the device. At bottom, "Iris" is a movie for people who venture out to see something "worthy" (the same people who claim they only watch PBS). It's adult and literate and conventionally well-made.

I don't want to spend any more space than is necessary lingering on the movie's faults because, next to the performances of Dench and of Jim Broadbent as Murdoch's husband, the literary critic and novelist John Bayley, those faults are so much chaff. Dench and Broadbent in their scenes together are a painful and loving duet, creating as moving a portrait of marriage as anything the movies have afforded in recent memory.

The screenplay, by Eyre and Charles Wood, is based on Bayley's two memoirs, "Elegy for Iris" and "Iris and Her Friends," both written after Murdoch had been diagnosed with Alzheimer's disease. I have only read the first book but, like the relationship created by Dench and Broadbent, it can be described as painful and loving. Bayley wrote about the horror of watching someone you love, a person in love with the life of the mind, succumb to Alzheimer's ravages, but he also wrote about the joy he found in caring for Murdoch. There was occasional frustration, angry words spoken in haste to a woman who could no longer comprehend their meaning. The role of caretaker was something of a fulfillment for Bayley, the ultimate expression of the devotion he had shown Murdoch their whole married life. Dan Rather nailed it when he called "Elegy for Iris" a description of "joys that are greatest because nobody else knows them."

And yet there was an irony in the fact that Bayley found the biggest audience of his life in books about the woman whose work had long overshadowed his in public perception. If Bayley resented that, he didn't let on. "I can't catch up," says the young Bayley (Hugh Bonneville) in an early scene of "Iris," and Bayley's writing, as well as Jim Broadbent's performance, suggests a man who found a sort of contentment in not catching up, a confidence in doing his own work at his own pace while being allowed to love a creature he found magnificent.

There are things left out of that view, things the movie suggests without really acknowledging. There's a sort of masochism to the younger Bayley's willing subjugation of himself to Iris. Part of the reason for that perception is Hugh Bonneville, whose performance is mannered, his awkwardness forced. This Bayley seems to be a young man trying on the tics and eccentricities of the old man he will become.

And in the latter-day scenes, though I don't mean to be unkind, you can't help wondering if Bayley felt some sort of relief that Iris' illness meant he no longer had to worry about catching up with her. (In "Elegy for Iris" he describes his stricken wife as not the real Iris, but a childlike girl in a fairy story.) But I think it would be churlish to doubt Bayley's very real devotion, to which Jim Broadbent's performance does full honor. There is something infinitely gentle, infinitely patient revealed in it. He's a cooing mother hen, careful to provide the connection that Alzheimer's patients so desperately need. "If Iris could climb inside my skin now," he wrote, "or enter me as if I had a pouch like a kangaroo, she would do so."

And yet Broadbent doesn't shy away from the fleeting dark clouds that cross Bayley's face, moments of anger or exasperation that suggest the frustration that can suddenly rise in someone besotted with his beloved. In one scene, Iris, now fully surrendered to Alzheimer's, reacts fearfully when the postman rings the doorbell. "It's only the postman," Bayley assures her cheerily, and it's heartbreaking to watch Dench cling to the words, repeating them like a mantra, as if the repetition would reveal their meaning. Suddenly Bayley, not able to take it, flies into a rage, and it's even more upsetting to watch him apologize immediately after, while Iris fearfully tries to reestablish the comforting connection that his anger has broken. At one moment, Bayley shuts himself in his study to compose himself, and Iris goes to the glass door, scratching at the pane to get his attention. It's a horrible fulfillment of the loving nickname he gives her, "my dear little cat," and it recalls Kenneth Tynan's story about his young daughter hearing "Kind of Blue" and identifying it as Miles Davis because, she said, he sounded like a little boy who'd been locked out and wanted to get back in.

Dench, who gives a mostly silent performance, makes spectacular use of the dialogue she does have. When, in the midst of writing, she stops over the word "puzzled," writing it out again and again to make sense of it, Bayley, not yet realizing she is in the first stages of illness, says, "All words are like that when you take them by surprise." The poignancy and mounting terror of Dench's performance is in her portrait of a woman who has made her life out of words and suddenly finds the simplest of them taking her by surprise. Repeating things in a vain attempt to keep them from sliding from her mind, Dench suggests one of Beckett's dark jokes about the ravages of old age. And as Iris slides fully into Alzheimer's, Dench becomes almost fully interior, conveying Iris' awareness that she is falling away from herself until finally, she appears to be a frightened creature peering out from a safe nook at a world that no longer makes sense. (That's why the kindnesses shown her count for so much, especially in a scene where a taxi driver, played with an indelible and ineffably touching gentleness and solicitousness by an actor named Stephen Marcus, gently leads her into his hack.)

On the surface, Dench doesn't appear to do a thing, and yet she makes the terror of someone teetering on the edge of a void palpable. In one scene she walks into the BBC to tape an interview and is confronted with a videotape of her younger self. In the space of a few seconds, Dench conveys a terrifying sense of feeling separated from your very being. And it's a tribute to Kate Winslet that the vividness of her portrayal of the young Iris provides a sense of what Murdoch lost. In some ways, Winslet is too pretty to play Iris Murdoch. But her performance doesn't end with the blunt haircut she's been given. There may be no young actress who uses her body as powerfully as Kate Winslet does. She seems here to be always trudging forward, stooped almost (her gait is a variation of Groucho's) as if by pushing her body her mind will be commanded to catch up. Winslet mingles a sense of unshakable certainty with an intellectual restlessness that makes her seem to be always in motion, even when she's sitting still.

That energy haunts Dench's performance in scenes like the nearly unbearable moment when, to calm her, Bayley reads to her from "Pride and Prejudice" and with a small questioning lilt she meekly says, "I wrote." Dench's usual flintiness, the way her eyes and the set of her mouth always seem to be taking in the dozen hidden layers behind whatever anyone says to her, gives way in "Iris" to a dazed look that is no less eloquent, no less focused. Playing someone with Alzheimer's could so easily have been a stunt (the way playing a retarded person, or an autistic person almost always is), an easy play for audience sympathy. Dench never loses herself in the fog that descended upon Iris Murdoch; she's always communicating back to us, shining a dim beacon from that uncharted country from whose bourn no traveler returns.