"Rushmore" director Wes Anderson is more interested in his own precocity than he is in his characters. 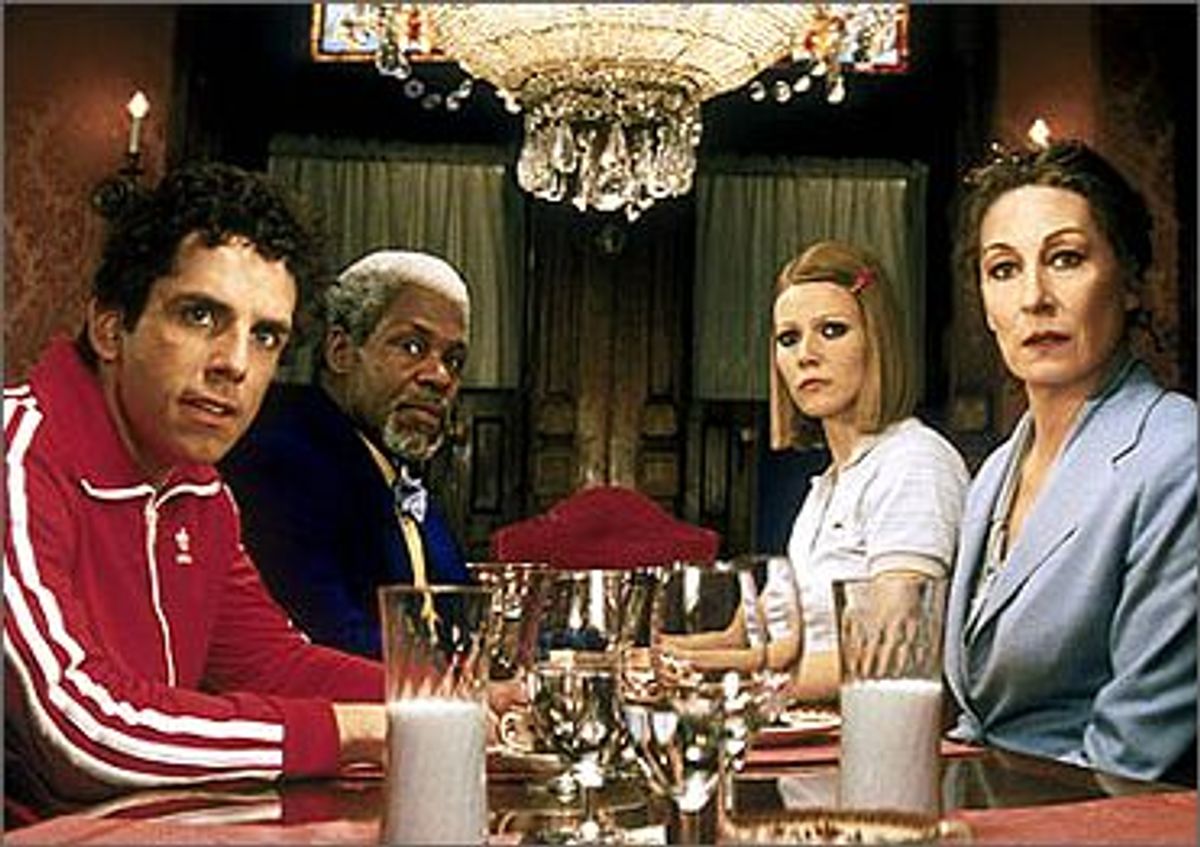 "The Royal Tenenbaums" marks Wes Anderson as a director whose heart is in the right place: The problem is that everything else is out of whack.

There's an awkward self-consciousness to the way he strings scenes together, like giant wooden beads, that some critics and fans have hailed as visionary in his previous films, "Bottle Rocket" and, particularly, "Rushmore." But to the rest of us, those scenes don't connect in any meaningful rhythm. And that's only the beginning: Anderson's other hallmarks here are brilliant gags that deflate in the execution, potentially interesting characters that end up so flat they feel as if they'd been cut out of paper, a plot that's all setup and no story. "The Royal Tenenbaums" strives to be ambitious and homey at once, and even though I want to trust that Anderson's impulses are pure, the movie is so calculating that I could only imagine Anderson sitting in some darkened room somewhere, toting up the laughs and tears on a child's chalkboard.

Anderson is the kind of director who, with his quirky awkwardness, puts distance between his movies and the audience instead of collapsing it. Some people enjoy his style and bridge the distance easily; others, like me, may feel that he's more interested in his own precocity than he is in his characters. The charm of his bumptiously lauded 1998 "Rushmore" eluded me, but I will grant that he has a pointed understanding of class issues: He realizes that class-based insecurities are much more interesting (and more deep-rooted) than the favorite topic of so many other young filmmakers, suburban ennui. (In other words, he's not part of the loathsome "I'm so bored out here in my parents' big expensive suburban house" school of filmmaking.)

There's also sincerity in Anderson's approach, if you have the temperament and the energy to look past his constant smirking to see it. "The Royal Tenenbaums," especially, makes that pretty hard work. Gene Hackman is Royal, the taciturn and mostly absentee head of the Tenenbaum family, a neurotically grand bunch that has splintered and fallen on hard times. He and his wife, Etheline (Anjelica Huston), have been separated, though not divorced, for years. Their three offspring, each of whom was a child prodigy, have grown up and left the nest, but all of them feel at sea in the outside world, unable to adjust to its relentless rolling and pitching.

As a kid, Chas (Ben Stiller) started a business breeding Dalmatian mice. He's now a high-roller tycoon with two kids; he's also a crankily grieving but intensely guarded widower. Richie (Luke Wilson) was a tennis champ until, one fateful day, he mysteriously flipped out on the court during the match of his career. Margot (Gwyneth Paltrow) wrote an award-winning play at the age of 9. Now she no longer writes and spends much of her time indoors, in her bathtub, hiding her secret smoking habit from her adoring Oliver Sacks-like hubby (Bill Murray).

Circumstances, among them Royal's announcement that he's terminally ill, cause them all to return to the homestead. And although each is acutely aware of his or her miserable childhood, and the neglect and indifference with which Royal treated them (Etheline was always vaguely supportive but distracted), they feel more at home in the big old family house than anywhere else.

Anderson spends a great deal of time introducing the characters and explaining their histories. (There's a voice-over by Alec Baldwin that, "Virgin Suicides"-style, outlines everything we need to know.) Anderson captures an aura of wry mournfulness in these flashback tableaux, particularly the sight of the child version of Margot in a striped sports dress, her hair tucked back with a plastic barrette, tapping away solemnly at one of her plays. Set against an instrumental version of "Hey Jude" -- a song written for a neglected child -- these vignettes establish a delicately morose mood that the rest of the movie doesn't live up to.

For one thing, though it's splashed with color, "The Royal Tenenbaums" is too flat to be vivid. Each shot is like an inert comic-book panel (and without the intentional angularity that Terry Zweigoff achieved in "Ghost World"), in which the characters look like lost foreigners. It's faux folk art.

And the story, written by Anderson and Owen Wilson (Luke's brother, who also appears in the movie, doing a loopy turn as a Richie Rich neighbor kid who grows up to be a modern-day Zane Grey), ambles nowhere after that long setup. There's no dramatic electricity to draw you in or set you buzzing; with few exceptions, the characters' feelings and motivations are put on-screen in an expository, rather than visceral, way.

Most of the characters, particularly Stiller's, feel vague and unshaped. The device of dressing the present-day characters in grown-up versions of the same clothes they wore as kids feels forced and gimmicky in all cases but one: Paltrow, her eyes done up in thick, smoky rings of kohl, slinks around mousily in a big-girl's version of that same striped sports dress, with a mink coat thrown on top as her one conscious concession to adult mystery and glamour. She's like a mod version of those elegant, spookily remote Edward Gorey ladies.

Paltrow has some lovely moments with Luke Wilson, particularly a scene in which they huddle in the indoor tent Richie has set up in his old room at the homestead. (The eccentricities pile up in this movie like a heaping platterful of petits fours at a patisserie run by a neurotic baker.) He and Margot, connected by a special bond, talk to each other in a scene that has an uncharacteristic (for Anderson) low, quiet, swaying rhythm, set to the Rolling Stones' elegiac "She Smiled Sweetly." (Anderson has a good ear for music recorded before his time; he brings new audiences to it, and delights and surprises some older moviegoers, too.)

Most of the other actors look and feel lost in this 2-D showpiece of a movie. A subplot involving Etheline and her gentleman suitor, played by Danny Glover, feels particularly patched-in and seems to serve only as an excuse for some forced, unfunny banter between Glover and Hackman. But Hackman's Royal, crusty, enchantingly off-putting and not above cheap fakery if it means earning the love of his family (a love that, previously, he never had nor wanted), is the one character who resonates every time he's on-screen.

Hackman knows just what to do with Anderson and Wilson's lines, many of which are -- or, more accurately, should be -- genuinely funny. In trying to express sympathy to Chaz's children (played by Grant Rosenmeyer and Jonah Meyerson, they have the snidely poetic names "Ari" and "Uzi"), he sputters the most comforting line he can come up with: "I'm very sorry for your loss. Your mother was a very attractive woman." Realizing that he didn't spend enough time with his own kids, he takes Ari and Uzi under his wing. The movie's best sequence shows him teaching them to jaywalk and shoplift cartons of juice. One triumphant snippet shows Hackman zipping along on a tiny go-cart: It's a grand visual gag.

But Hackman's turn only points up the monotonous failed jokes that make "The Royal Tenenbaums" so top-heavy, and ultimately topple it. A gag involving a gypsy cab is hilarious the first time and exhausting by the eighth. There were dozens of times I'd find myself staring in disbelief at the screen, realizing that joke after joke was brilliant and yet I'd barely laughed at all. Chaz's Dalmatian mice -- tiny, spotted, scampering things -- should have been one of the finest miniature visuals of the year. But when I saw them, they just seemed planted and obvious -- a detail so carefully mechanized to delight us that it simply doesn't. The jokes in "The Royal Tenenbaums" don't tickle you -- they wallop you.

Anderson's movies have the innocence of a crayoned drawing, which is part of what some moviegoers like about him. His ramshackle charm comes with a price, though: Anderson's movies are assertively asexual. They exist in a world where nothing so messy as sex intrudes except at the most basic childlike-crush level.

If there are essential nooks and crannies of human experience that Anderson finds yucky and off-putting, his alleged brilliance is going to hit the ceiling pretty soon. Meanwhile, though, his overconfident feyness, generally unbecoming in any artist above the age of 8, is already wearing thin. Like those rarefied, assertively cute mice, he's showing his spots. It's up to us whether to buy them or not.