Well-meaning observers are making dangerous assumptions about Afghan women and their goals for the future. 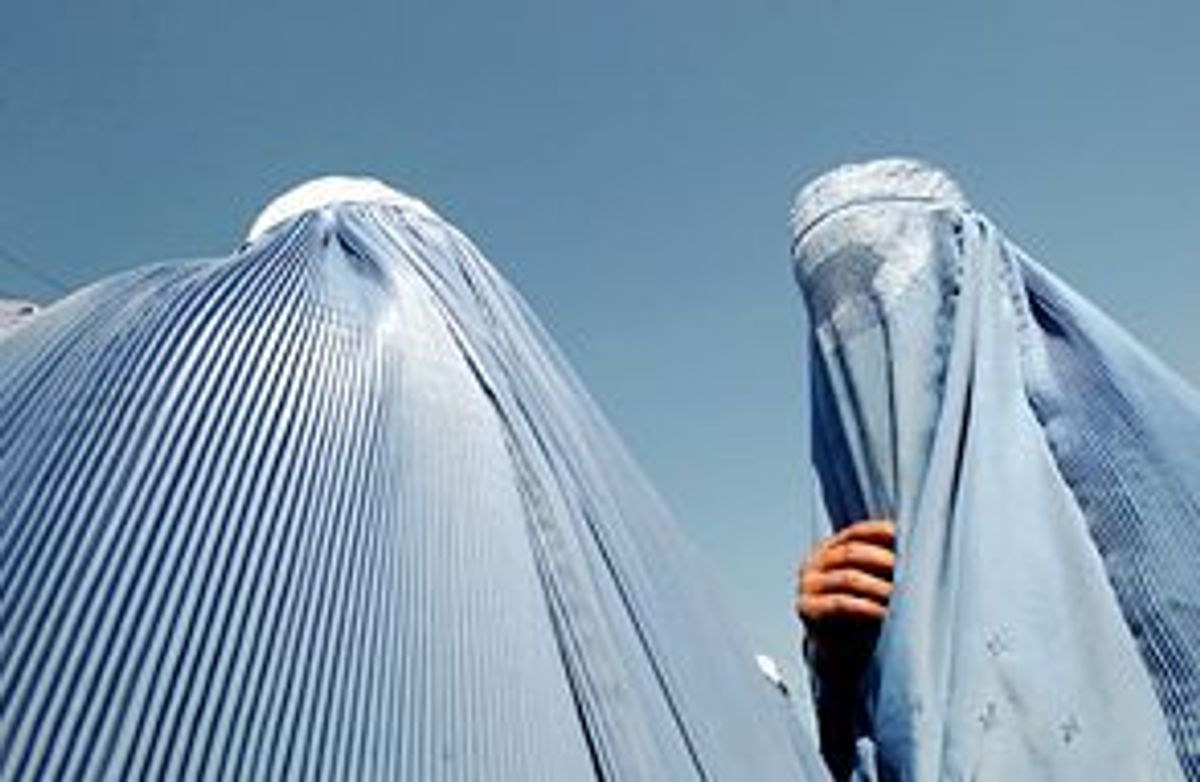 Some of the language I hear in conversations about women's roles in post-Taliban Afghanistan makes me nervous. It seems that certain misconceptions may have crept into public perception of the issue.

For example, if I go by what I read and hear, women in pre-Taliban Afghanistan lived pretty much as women do in Italy or France. They enjoyed access to all the professions, served in the government, dated and married whom they pleased and wore cosmetics and miniskirts.

Some women did these things, but they constitued a fraction of the population -- 10 percent tops. These were the women who lived in the city of Kabul and belonged to the Westernized, educated, urban elite. In rural Afghanistan, in the villages, smaller towns and provincial cities such as Kandahar -- which is to say, most of Afghanistan -- a different way of life prevailed.

I'm 53, and when I was growing up in Kabul, Afghanistan was a world of villages and walled compounds with virtually no technology, no factories and no industries -- a society of tribal peasants who eked out their subsistence as farmers and herders.

In this world, life was divided, not exactly between men and women, but between a public realm and a private one. The public realm belonged, indeed, to men. Women rarely left the shelter of their compound walls without male escorts and then they wore chadris, that body-bag veil now known as the burqa.

This wasnt Afghanistan in medieval times. This was Afghanistan when Elvis was king. What's more, although Afghanistan represented an extreme, this concept of a divided world prevailed down through south Asia. It didn't just spring out of Islam; it came out of a deep soil of local traditions.

And here is what outsiders didn't realize: The private realm, at least in old Afghanistan, was a universe unto itself -- big, rich and complex. In that hidden universe, women had authentic power. You want proof? The first three female heads of state in the modern world emerged not in France, Italy or the United States, but in Pakistan, India and Sri Lanka. Clearly, in that hidden universe, women were somehow growing up trained for leadership.

Then the changes began. The Cold War brought both superpowers glad-handing into Afghanistan with suitcases full of cash and ideas for development projects. Wherever the 20th century rubbed directly against traditional Afghanistan, ferment bubbled up. Kabul went through 2,000 years of social change in two decades.

But the provinces didn't -- largely, I think, because people there, women included, had a way of life that was working for them and fit their material circumstances. For this reason, a cultural rift opened up between Kabul and the rest of Afghanistan until, inevitably, Kabul began to function like an imperialist power within its own borders, attempting to impose cultural hegemony.

And the thorniest issue between Kabul and old Afghanistan had to do with sexuality and women's roles.

When the Communists took power, their program departed even more radically from traditional Afghan culture, and their methods were so coercive that the rift turned into a rip. The countryside took up arms. This sparked the Soviet invasion. Virtually all Afghans then opposed the Soviets as foreign invaders, but the bloodshed that erupted seeped into the deeper indigenous conflict between old Afghanistan, which was tribal, rural, conservative and religious, and new Afghanistan made up of the urban, Westernized, elite minority.

As the war developed, most of that educated urban elite escaped to Europe and America. Those who stayed to fight the Soviets were by and large the provincials. The refugees in Pakistan, those millions who lived in the squalid camps that spawned the Taliban, were mostly the women and children of the men who stayed in the country to fight the Soviets and die like ants.

When the Mujahedin finally toppled the last Communist ruler of Afghanistan and marched into Kabul, it wasnt just the triumph of the Afghan people against the foreign invaders but the conquest, finally, of Kabul (and its culture) by the countryside.

Now, thanks to American intervention, the educated, Westernized, urban elite will come back to power. This is good news. When the traditional conservatives got their hands on the levers they tore the country to shreds and ran it into the ground. But it's wishful thinking to suppose that Kabul equals Afghanistan. Most of Afghanistan was never Kabul, and most of Afghanistan is still out there.

Which brings us to the question of women.

The Taliban did not spring directly from hell. They sprang from Afghan culture strained through hell. They had roots and antecedents in Afghan culture, just as Charles Manson had roots and antecedents in the Summer of Love. Because of these thematic echoes, criticisms of the Taliban do not always make careful distinctions between the depravities of the Taliban and the values of traditional Afghan culture. Attacks on the one merge unnoticed into attacks upon the other. Enthusiastic prescriptions for restoring peace and justice to Afghanistan sometimes boil down to plans for replacing Afghan-style traditional Islamic culture with Western-style (secular) democracy.

Personally, I doubt that's going to happen. I think rural Afghans will be looking to reinstate the traditions and the way of life they lost. In the short term anyhow, Afghanistan will emerge from this as a socially conservative Islamic society. And if it does, this should not be confused with restoring the Taliban. If left alone and allowed to heal, Afghanistan will evolve, and who knows to what. But social change imposed from outside by fiat cannot produce a healthy society.

I worry about coercive language that has found its way unnoticed into conversations about the women's issue in Afghanistan. I think it was Laura Bush who said "putting" women into the Afghan government was "nonnegotiable." But instead of "putting women into," why don't we think in terms of supporting Afghan efforts to build a government of their own that includes women?

A powerful organization of European women recently laid down a quota: 40 percent of government posts in Afghanistan have to go to women. Refresh my memory: What's the legal quota for women in the U.S. Congress?

Virtually all the talk about empowering women in Afghanistan focuses on the agenda of the urban elite -- getting women into the national government, liberating women from a dress code, ensuring their access to all professions, and affording them a university education. Excellent goals. I hope they're met.

But what about the rest of Afghanistan? Is access to professional jobs and freedom from a dress code next on the agendas of rural women? Perhaps their most immediate hopes are for a cow to milk, shelter from strangers and a functional extended family that includes men. Maybe not, I haven't asked them; but to my knowledge, neither has anyone else.

Wherever Afghans choose their traditional way of life, I think the international community should work with rather than against the grain of the culture. Empowering women through their traditional roles may lead to the deepest changes. To me, right now, a historic opportunity exists to support the real empowerment of Afghan women without engaging in a cultural tug of war with traditional Afghanistan. This country's most critical needs coincide with the roles traditionally assigned to women, and shouldering these tasks will put women center stage, authentically shaping the future of Afghanistan.

Afghanistan is starving. Food shipments will come in. Someone will have to distribute it. It makes sense to put rural women in charge of that. Families are decimated, households shattered, someone will have to care for the old, ill and feeble. If international aid agencies work directly through women to attack these problems, rural women could end up running social services, staffing clinics, distributing medicines.

Afghans are in rags; someone will have to make and distribute warm clothing. It makes sense to provide small loans to rural women to buy looms so they can clothe their own families. And one day, perhaps, they will be able to produce a surplus to sell. And eventually perhaps they will develop a garment industry, but that's up to them. And isn't that better than having Levi Strauss build a factor in Kunduz and impose on them the rule that half their hires have to be women?

And then there's a task that looms above all others. Someone will have to take in the orphans -- half a million of them, and many of them disabled. Someone will have to tend to those broken bodies, mend their hearts and make them feel important and loved, because if those kids don't get a stake in peace and a chance to grow up healthy, we're looking at another generation of emotionally damaged troublemakers 15 years down the line -- more Taliban.

So when the aid money starts flowing, how about earmarking a serious chunk of it for orphanages? And let those orphanages be staffed and administered by Afghan war widows. The orphans need shelter, the widows need honorable employment and the world, for its own sake, needs to rescue the next generation of Afghanistan from horror.

Putting a few women into the national government is fine, but if it stops there it could end up as tokenism. Worse, it could line up the international community on one side of the enduring tension in Afghanistan between city and country. If Afghanistan is to heal, the well-wishers need to be on both sides of that line.

Tamim Ansary is a writer in San Francisco.