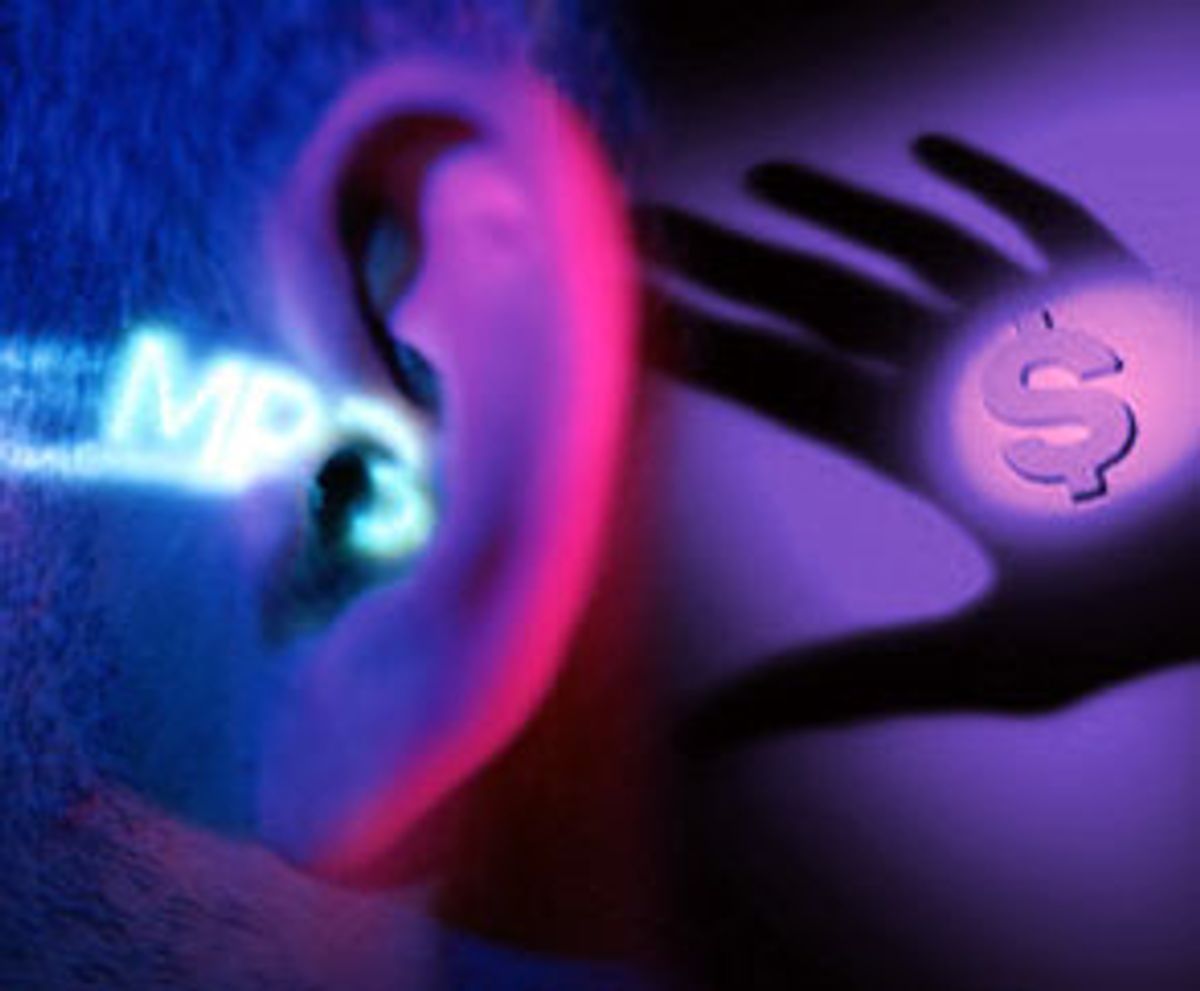 I knew the fight between the record industry and Internet users was going to work out OK as soon as I saw the print ads for Apple's iPod MP3 player. Nested at the bottom of the page is a comical disclaimer: "Don't steal music." Ha ha! With its thousand-song capacity and easy-to-use interface, everyone knows iPod is a great incentive to go out and steal more music to fill it with.

Think back to three years ago, when the first portable MP3 player debuted. The Recording Industry Association of America sued Diamond Multimedia to halt shipment of its cute little Rio, which held only an hour's worth of music. This time, the major labels are willing to let Apple sell a portable player for pirated tunes (100 CDs' worth of them at a time!) in exchange for a laughable admonishment to its customers: Don't steal music, kids.

If this seems inconsistent coming from the same industry whose lobbyists brought us the DMCA and are now pushing the SSSCA bill that would require all consumer electronics in the U.S. to come with anti-piracy technology built in, it's because the record companies are pursuing two goals at once. Long term, they need to come up with a way to sell music online that consumers will buy into. In the meantime, they are desperate to keep the entire store from being pilfered.

Jim Griffin, the Cherry Lane Digital CEO who handles rights management for songwriters and movie studios, says the shouting about pirates and anti-theft devices is a deliberate short-term distraction, meant to keep the rest of us occupied until the big players can agree on a cash-flow model for downloadable entertainment. "There may be a division of Sony building encrypted players in all earnestness," he says, "but there's no way the heads of the company believe that's their long-term strategy. So much of this DRM [digital rights management] stuff is just sending husbands out to boil water while the wives have the baby."

We got a first peek at the baby last week: A little-noticed announcement by America Online was, in truth, the moment we've all been waiting for. AOL has debuted its fledgling music subscription service, MusicNet, for $9.95 a month -- less than the price of even one CD. AOL execs downplayed the launch as a beta test, but coming from the unquestioned leader in online access, a company known for the Mom-and-Pop friendliness of its software, it's unmistakably the beginning of the end for the war between the music industry and the Net.

Only the beginning, though. MusicNet suffers from the same sort of restrictions and hurdles that sent people running to Napster in the first place. There's a monthly limit on downloads, and there are technical restrictions to keep customers from burning everything they can get their hands on to CD. And MusicNet only offers music from three of the big five labels -- Warner, Universal, Sony, BMG and EMI -- with no independent releases.

To really succeed, AOL's music service needs to be as good as the free and easy alternatives. Pricing needs to be an all-you-can-eat bundle rather than a complicated set of restrictions that thwart customers at the moment of fulfillment. AOL should know: The company pioneered flat-rate ISP billing in 1997 and made it an industry standard despite the initial pains caused by a rush of customers who simply left their modems dialed in. Music should be offered the same way: Once you've paid to get in the door, listen to as much as you want.

Likewise, the industry needs to let go of attempts to impose Byzantine copy-protection schemes on consumers, as suggested by the SSSCA bill being drafted by Sen. Fritz Hollings, D-S.C. Remember the complicated copy-protection schemes on software floppies? We can only imagine the number of profit-killing phone calls to customer support: "It won't play." My own attempts to use MusicNet's beta were frustrating, clearly because of code designed to stop me from playing music not covered by the terms of my subscription, a technical feat much harder to pull off than just letting me go ahead.

Indeed, the pointless attempt to control copyrighted data every step of the way from musician's voice to listener's ear is the biggest roadblock to success for online music. Just as HBO doesn't try to stop you from taping its movies, so music sellers need to let go and trust their customers. Remove the incentives for people to steal, rather than imposing more technology that treats customers as would-be shoplifters. Even former BMG head Strauss Zelnick, who says he has no problem throwing big-time bootleggers in jail, agrees the industry's challenge is to come up with an attractive alternative to Aimster and its ilk. "We need to give consumers a service they want, at a price they're willing to pay," he told me in an interview this summer. "People don't like to think of themselves as criminals." But ironically, the more anti-theft hurdles crammed into the legal products, the more attractive the pirate alternatives become.

Surely they know that by now. Given the ample evidence from researchers like Edward Felten that there's no technological way to stop bootlegging, it's hard to believe the heavy-handed application of the DMCA and lawsuit threats is anything other than a stall for time -- sending husbands to boil water -- until the stakeholders can agree on how to tap and share the lucrative Internet music channel.

A monthly subscription shouldn't require the customer to stop and wonder every time she wants to play a tune: Do I have my license key? Which players will this work on? Which record label is the singer on and what subscription services carry that one? Why won't it play? Ugh. The threat of ubiquitous digital licensing, copy protection and monitoring isn't that Big Brother will know what you're listening to; it's that you'll give up trying to listen to it.

There's no business need to monitor every song every surfer on the Net is listening to, anyway. Griffin points out that radio airplay royalties have long been based on samples taken from station logs -- actuarial fees, rather than actual fees. "Radio stations have the option to pay exactly per song played," he says, "but not many of them use it. After 15 years, we've learned there isn't much difference between the sampled numbers and the individually counted numbers."

Even my local coffeehouse pays an insurance-like annual fee to ASCAP, the songwriters' agency, to cover the likelihood that one of its open-mike night troubadours will do a Pete Seeger tune and incur royalty fees for the house. And whenever I buy a new blank cassette to record phone interviews, I pay a few extra cents that goes to the major labels in case I use it to bootleg one of their recordings. Why can't my ISP just add on such a tax, send it to the major labels and let me download anything I want, any way I want? There's no one pricing scheme that will make everyone happy, but bundled payment options are a lot more attractive than trying to stop people from doing what they will.

It may happen. "Don't Steal Music," rather than the complicated copy-protection system Apple could have jiggered into the iPod, gives me hope the music industry is finally figuring out its place in a world being remade by the Internet and a global economy. As a longtime musician and sometime D.J. myself, I've seen firsthand that the big five are in it not to make music, but to make money. But the industry's annual revenue of $15 billion is, on a global scale, peanuts -- Web hosting alone pulls in more than three times that much. Already, the big five record companies are losing their grip as evil Masters of the Universe, becoming instead the mere henchmen of new broadband empires. Warner is part of AOL, Universal is merged with Vivendi, and Sony makes far more from Playstation than from Michael Jackson. In the 21st century, record execs are finding themselves on the other side of the negotiating table: Yes sir, Mr. Case.

In that light, Bertelsmann's partnership with Napster was a smart move to secure a future for itself. Napster had reenergized millions of music fans, who held its brand dearer than any record label. But that excitement is fading with every day we wait for the people who own the music to let go enough to make buying their wares easier than bootlegging them. Instead of telling us not to steal, how about just giving us a way to pay?

Paul Boutin is a technologist and writer in San Francisco.